After a lengthy public process to weigh possible changes to the controversial Roland Avenue cycle track, city officials last month announced their decision: None of the five potential options was chosen.

Instead, a “careful review” of the comments led to the determination that “further study” was needed, Department of Transportation officials said.

So what did those commenters actually say?

Baltimore resident Carl Shapiro submitted a public information request and, this past week, received the answer:

A clear majority – 62% – essentially favored keeping it. They chose “Option 1,” which would widen the existing parking lane, but still keep it “floating” between the curbside bike lane and moving traffic.

That option would also reduce traffic lanes from two lanes to one in both directions.

Shapiro, in an email to The Brew, said the results showed that DOT was delaying action in response to “a vocal small minority of residents.”

The majority of its 419 respondents – 57% – preferred Option 2: essentially returning this stretch of Roland Avenue (between Cold Spring Lane and Northern Parkway) to the way it was pre-cycle track.

Only 16% listed Option 1, keeping the existing cycle track, as their top choice.

We double-checked with DOT, which confirmed the total number of comments (760) and the breakdown (see below).

Why did DOT not follow the wishes of the majority of the commenters?

“The Department of Transportation has been working closely with area residents, businesses, cyclists and other project stakeholders to develop a solution along Roland Avenue that focuses on safety for everyone. A key factor to the selection was that there were specific concerns relating to school operations and increased cut-through traffic on neighborhood roads.

“While our nonscientific poll resulted in the selection of Option 1, it raised other questions in regards to other safety concerns. To answer these and other questions regarding the options, DOT engaged leaders from the community who agreed that additional analysis and engineering will lead to a more informed design decision.”

For more on RPCL’s poll results and methodology, in addition to the graphic below, go here. 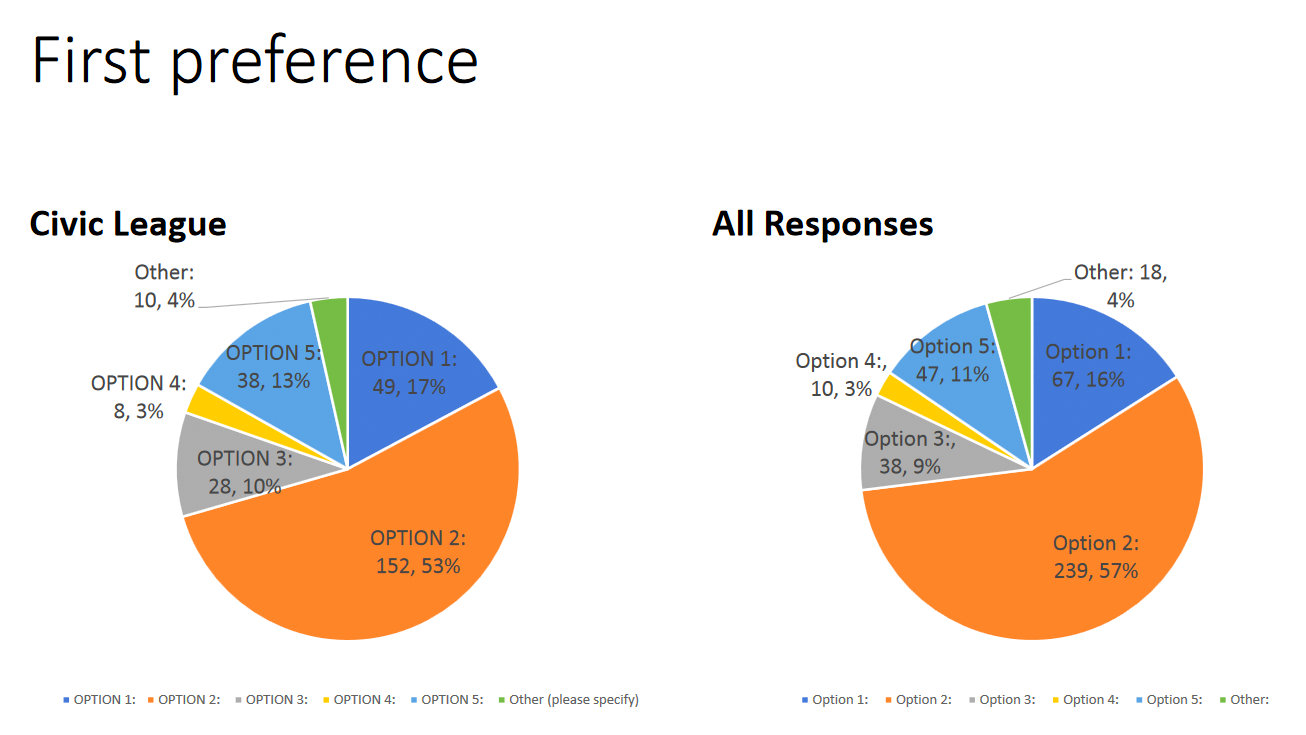 Results from the Roland Park Civic League’s poll on the cycle track, released in July. (rolandpark.org)

From a previous Brew story, here are the options:

OPTION 1: Widen the parking lane, but still keep it “floating” between the bike lane and moving traffic. Reduce traffic lanes from two lanes to one in both directions.

This was DOT’s preferred option.

OPTION 2: Remove the floating lane of parking and move parking back next to the curb. Create a bike lane alongside the parked cars, and maintain two travel lanes in both directions.

This is the option closest to returning the arrangement to the way it was before the cycle track was installed.

OPTION 3: Remove the floating lane of parking and move parking back next to the curb. Install a “buffered bike lane” alongside the parked cars.

Reduce travel lanes from two lanes to one in both directions.

OPTION 4: Remove the floating lane of parking and the protected cycle track. Restore curbside parking. On northbound Roland Avenue, create a two-way cycle track next to the median and separate it from moving traffic by flex posts or curbing. On southbound Roland Avenue, create a buffered bike lane alongside parked cars. Reduce travel lanes from two lanes to one in both directions.

This two-way track would work the same way as the cycle track on Maryland Avenue.

This would create one-way cycle tracks hugging both sides of the median with flex posts or curbs delineating the cycle track.