In March, UMBC was riding high, America’s darling after its upset win in the NCAA basketball tournament over top-seed Virginia.

The David-vs-Goliath victory only seemed to burnish UMBC’s reputation as a commuter-college-turned-nationally-respected research university headed by a president committed to academic excellence and diversity.

But yesterday speaker after speaker slammed the school at a campus event held in the wake of a federal lawsuit charging that UMBC has systematically minimized and covered up rapes.

“The fact that we’re holding ‘a listening session’ isn’t an opportunity for you to pat yourselves on the back,” one woman said. “This is a really bad sign. We shouldn’t be here. Y’all didn’t do the bare minimum.”

“I am one of the only people I know to not be a survivor. This is unacceptable,” one woman said. “I have friends who have had to move out of campus early while their abusers still remain in the residence hall.” 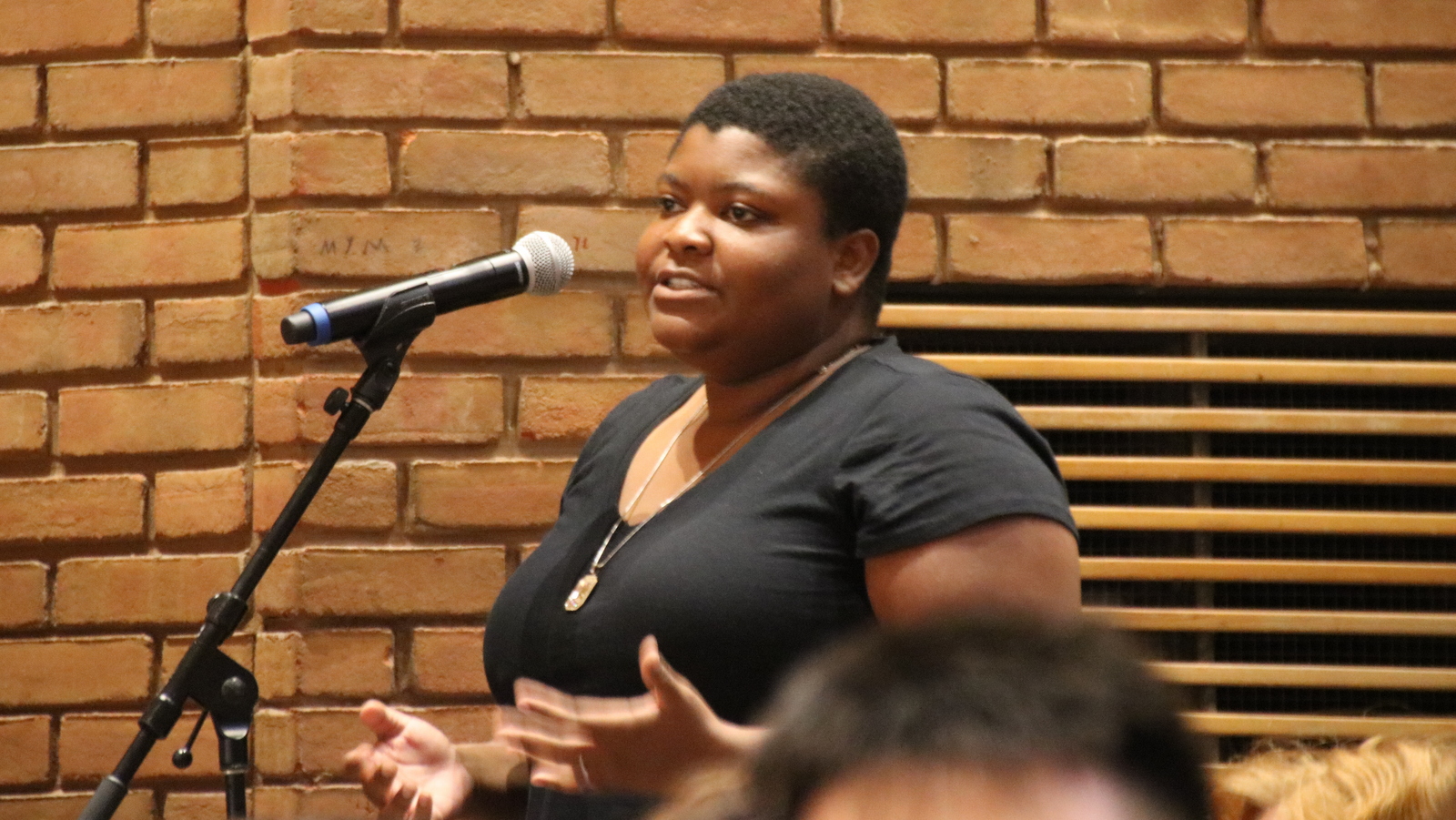 One of the many students who blasted school administrators for mishandling sexual assault reports. (Fern Shen)

“I feel like UMBC, my dream school, has failed me,” one speaker said, sobbing.

Another woman recalled an alumna’s warning:

“If anything happens to you, do not go to campus police. They will not help you. They will only protect the school,” the student said.

“She graduated five years ago. Why has it taken so long for anyone in administration to take this seriously?” 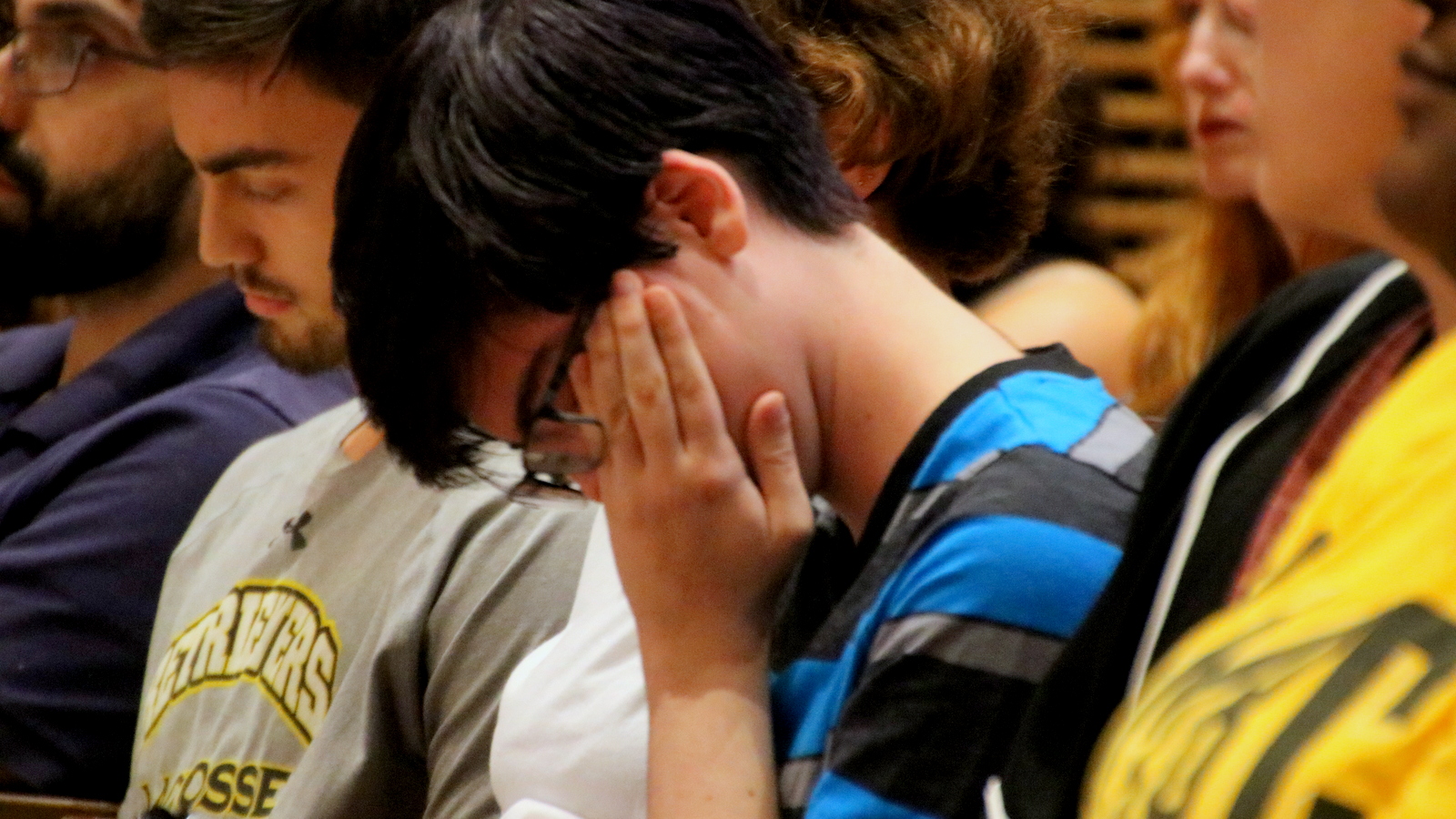 Emotions ran high at the UMBC listening session held after two women sued the school, saying it mishandled their sexual assault and other cases. (Fern Shen)

Promises to “do more”

As he did over the weekend, Hrabowski addressed members of the institution he has headed for the past 26 years and apologized, promising to “do more,” including bringing in an outside entity to investigate the issues highlighted in the lawsuit.

The federal class action complaint alleges “intentional misconduct” by Baltimore County, Baltimore County Police Department, Board of Regents for the University System of Maryland, UMBC and others. 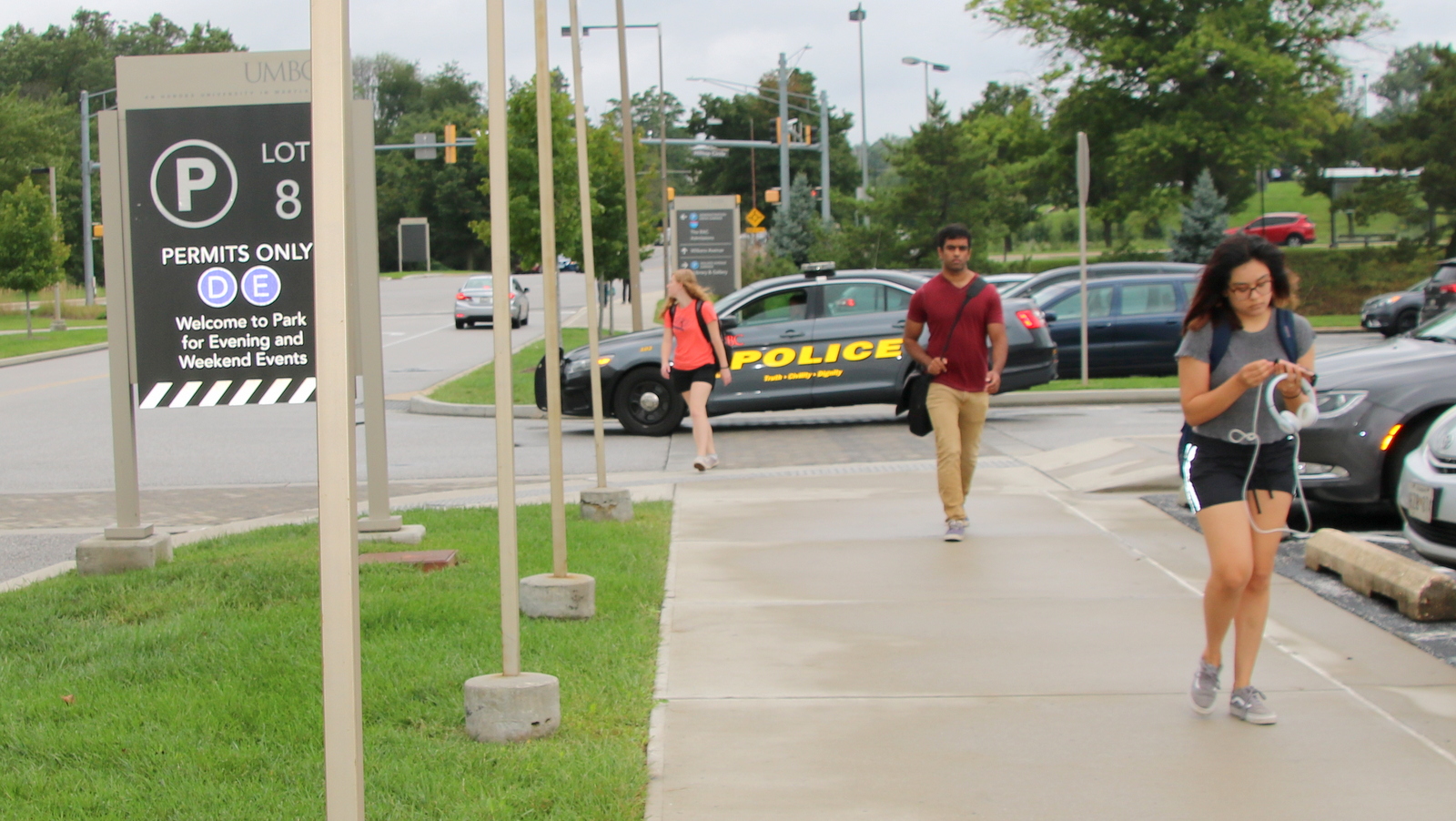 At  yesterday’s forum, students charged that campus police have dismissed their fears about safety, including poorly-lit parking lots. (Fern Shen)

Brought by two women who reported rapes by UMBC students – in one case, allegedly by three members of the college’s baseball team – the complaint says that the school routinely misclassifies rapes as “suspicious circumstances.”

One of the plaintiffs said that when she was an 18-year-old freshman in 2015, she was raped in her dorm by a person thought to have sexually assaulted other students.

She said UMBC Police Chief Paul Dillon persuaded her not to report the assault to Baltimore County police, but to have it handled “administratively” instead.

The student eventually went to the police after the school exonerated the assailant only to find her sexual assault examination kit had been destroyed because the report was wrongly classified a “suspicious condition.”

Several speakers complained that Dillon has dismissed students’ concerns about poorly lit parking lots and the lack of working police emergency boxes. He did not attend yesterday’s event and has declined comment.

Some of the other officials singled out were in the auditorium, including Nancy D. Young, vice president for student affairs.

Young, Title IX coordinator Bobbie L. Hoye and others were in a meeting last semester described by Aliya Webermann, a PhD candidate and member of the campus sexual assault advocacy group, We Believe You.

The speaker said she and her colleagues spoke of the need for mandatory sexual assault prevention training for students and other changes, but were “frequently interrupted” and “felt dismissed.”

“In the end, [the administrators] made suggestions, such as making more posters about Title IX,” the woman said, referring to the federal civil rights law that prohibits sex discrimination in education.

Like other UMBC officials, Young declined comment last week and referred a reporter to the campus spokeswoman.

While few details were coming out of the upper echelon, there were heartfelt expressions of grief and contrition yesterday at the lowest rung of its hierarchy:

Resident advisors (“RA’s”) in the dorms, students themselves who are often the first point of contact for troubled Retrievers.

“I apologize if I ever made any of you feel like you are not being heard,” one said.

Another was in tears by the end of her allotted two minutes.

“How am I supposed to build community and provide safe spaces for my residents who are crying with me at 2 a.m. about their trauma and their experiences and tell them that UMBC will take care of them if I don’t know what happens after?” she asked.

Reading in the campus newspaper about the baseball players who were criminally charged, then quickly cleared, of raping one of the plaintiffs made her nearly throw up, the woman said, explaining why:

The team was walking by at the time.

Hrabowski is well known for maintaining a rapport with students. Before the start of yesterday’s session, he chatted briefly with a few who were sitting in the front rows.

One of them was 21-year-old Elizabeth Hawkins, who explained to The Brew that she had been sexually assaulted on campus in February and withdrew from the school last semester.

Did Hrabowski approach her because he knew of her case?

“No, but he’s going to know it after this,” Hawkins said. 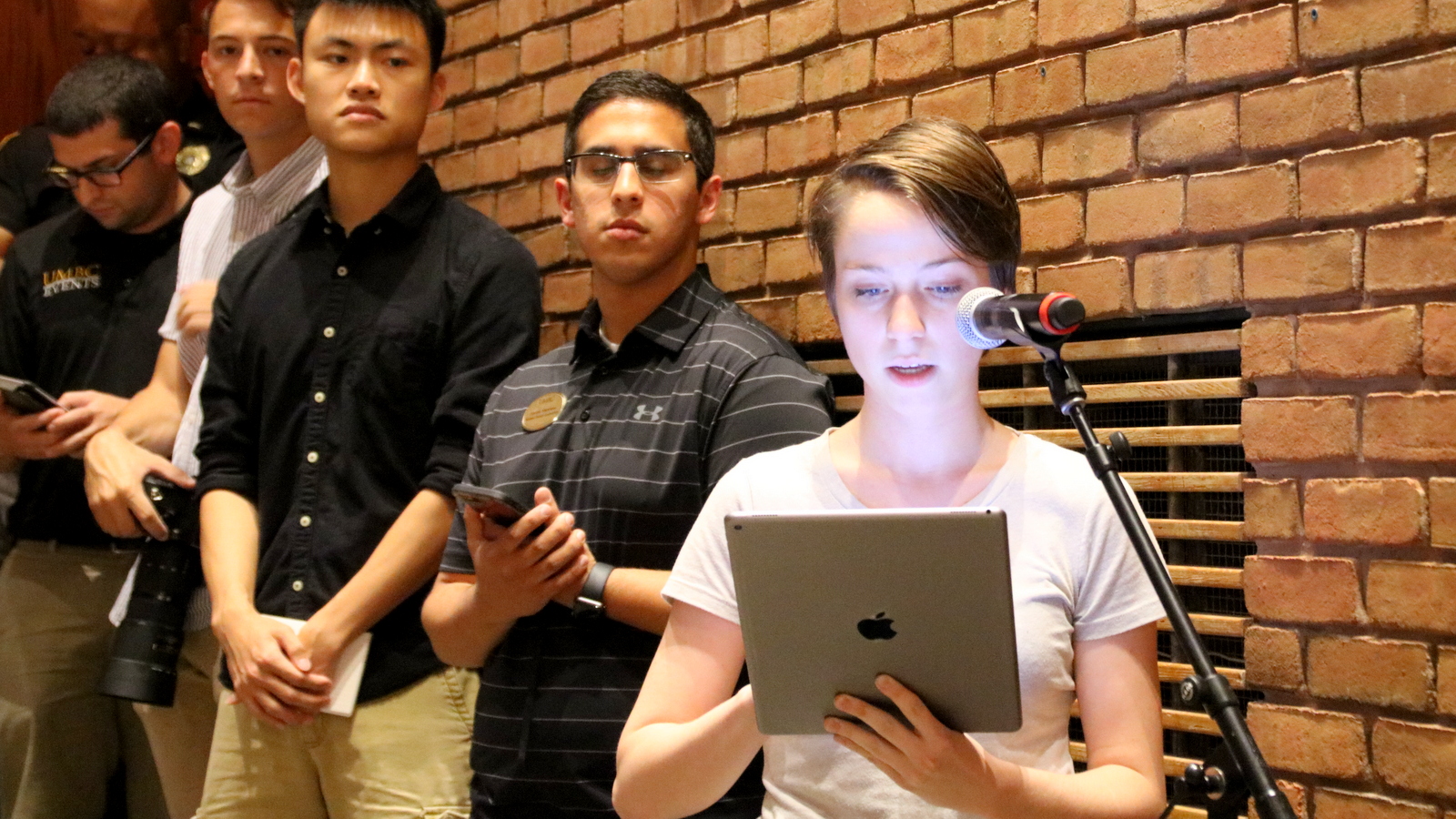 Junior Elizabeth Hawkins said she has heard nothing from UMBC about her sexual assault report for five months and is still awaiting information. (Fern Shen)

Taking a deep breath, she walked up to the microphone, the first to speak.

Her account began dispassionately, with Hawkins citing school policy that a decision must be rendered no more than 60 days from the time of the report. But Hawkins’ last contact with the Title IX office was in May, and she’s heard nothing since.

“Five months without a report on the progress that has been made is not reasonable. I feel disrespected as a member of the UMBC community,” said Hawkins, a chemical engineering major and member of the school’s Honors College.

Hawkins calmly described the frustration of driving around Baltimore the day after the incident in search of a hospital to conduct an exam. But by the end of her allotted two minutes, she was struggling to keep her composure.

“My experience has been traumatic not only because of the incident itself,” she said, “but because of the failure of the university to uphold its obligations to prompt investigation, thorough communication and actually support the students who are victims of rape and sexual assault.”

Before her remarks she had struck a hopeful note, observing to a reporter that “this is tragic for UMBC, but an amazing opportunity for change.”