There are shocking allegations in the federal class-action lawsuit filed last month by two former students at the University of Maryland Baltimore County.

They include charges that the women were discouraged from – and, in one case, threatened with arrest for – going to the police and pursuing criminal complaints against men who sexually assaulted them.

The former students, Anna Borkowski and Katelyn Frank, describe in detail a pattern of failing to properly investigate and prosecute complaints of sexual assault – a pattern that extends both to UMBC and to Baltimore County police and prosecutors.

But the contrast in the defendants’ reactions after the story broke is striking.

UMBC president Freeman A. Hrabowski III met with students, accepted responsibility for the school’s inadequate response to the problem of sexual assaults and promised an outside investigation and reform.

“No comment,” meanwhile, was the response by Baltimore County Chief of Police Terrence B. Sheridan and State’s Attorney Scott D. Shellenberger.

Yes, the events described in the lawsuit and recounted below remain mere allegations until proved.

But please don’t give me the line that you can’t discuss the matter while it is litigation. You can, despite what some county lawyer may be telling you. (I know – I am one.)

The truth will come out in the lawsuit, but it is important that county residents hear the answer now, not a year or more from now.

One reason these officials should speak up about the most troubling claims in the lawsuit: Baltimore County’s poor track record on this issue gives citizens reason to believe them.

A scathing 2016 story in BuzzFeed documented an astoundingly high number of rape complaints classified as “unfounded” by county police.

That story led to a review by a panel consisting of a retired circuit court judge and the director of the Maryland Coalition Against Sexual Assault. Its recommendations were implemented, Baltimore County Executive Don Mohler recently said, responding to the class action suit.

But the disturbing events that Borkowski described in the complaint took place on and after October 20, 2017 – well after these reforms were supposedly put in place.

Borkowski claims that she and an unnamed classmate were raped in the classmate’s Towson apartment on October 20, 2017 by three UMBC students, all members of the school’s baseball team.

The two women were encouraged by the men to drink from a bottle of vodka. She said the men pretended to drink but did not.

Borkowski believes that a drug had been added to the vodka. She says she became incapacitated, blacked out, and had only fragmentary memories of being gang-raped by the three men and of watching the men rape her classmate while her classmate was at various times unconscious or semi-conscious and asking them to stop.

Borkowski awoke later on the day of the incident and reported to police that she had been raped. She was taken to the Greater Baltimore Medical Center.

A sexual assault forensic exam (SAFE) confirmed that she had suffered “vaginal tearing,” an injury “consistent with sexual assault.” The Baltimore County Police Department was responsible for investigating the alleged rape. It did what can only be described as a cursory investigation.

According to the complaint, the apartment was never visited by police, much less searched.

Evidence including blood-stained bed clothing and the vodka bottle was never collected and analyzed, despite the fact that the men allegedly admitted to police that they poured the remaining contents of the bottle over the apartment balcony.

No analysis of the sexual assault evidence kit collected at the hospital was done, according to the complaint. And then there’s this:

The complaint says the three men accused by Borkowski were interviewed together by detectives at a Chick-fil-A.

The men allegedly admitted to having sex with the two severely intoxicated women. They described it as consensual and told the detectives that they did not understand what the issue was, the lawsuit says. The case was closed by the police and no charges were filed.

I don’t expect Sheridan to publicly defend the entirety of what appears to be a shoddy investigation. There is one question that he can answer, however, that could tell us all that we need to know about the seriousness with which his department took Borkowski’s accusations:

• Chief Sheridan, did your detectives interview the suspects together at Chick-fil-A?

If so, explain to the public how interviewing gang-rape suspects in a group at a fast-food restaurant is consistent with sound investigatory practices.

I can tell you, as a prosecutor, it is not.

Even more disturbing are the events described in the lawsuit that occurred after the state decided not to proceed with criminal charges against the three alleged attackers.

Borkowski decided to pursue the matter on her own by applying to court commissioner John Robey for a statement of charges.

Instead of making his own determination of probable cause, Robey contacted a detective and a prosecutor involved in the case. Instructed by them, Robey refused to issue charges, according to the complaint.

Ellingson made her own determination of probable cause and charged the three men with crimes including first degree rape.

When he found out about the statements of charges, State’s Attorney Shellenberger ordered police not to serve the summonses on the defendants, the lawsuit says.

Shellenberger and Dever allegedly then told detectives “to tell Ms. Borkowski that she has to stop bringing these additional charges or they will file criminal abuse of process charges against her.”

In my opinion, this was a hollow threat. For one thing, there is no crime of “abuse of process.”

The grand jury subpoena suggests that police and prosecutors were searching for inconsistencies in the affidavits submitted by Borkowski to the two different court commissioners. In other words, they were investigating Borkowski for perjury.

The hollowness of his threat didn’t stop Shellenberger from allegedly sending three police officers to Borkowski’s home in Baltimore to deliver it.

Police and prosecutors expended more time and effort trying to get Borkowski to back off than they did investigating her complaint.

Again, I don’t expect Shellenberger to be willing to go into detail about the actions of his office. But there is one question that he can answer that could tell us all that we need to know about his attitude toward alleged victims of sexual assault:

• State’s Attorney Shellenberger, did you send two detectives accompanied by a uniformed officer to Ms. Borkowski’s home to warn her against bringing any more charges against her alleged attackers?

If so, on what legal basis did you do that, and what did you tell the officers to say to her?

If the assistant attorney general representing you in the lawsuit advises you to not to answer this question, politely refuse the advice.

Explain to him that it is more important to assure citizens that their state’s attorney does not believe in harassing the alleged victims of sexual assault. Assuming, of course, that it is true.

I don’t mean to suggest in this analysis that UMBC students should rest assured the school will change its ways.

UMBC has its own history of mishandling of sexual assault reports, ineffective sexual assault prevention education and inadequate support for survivors, as UMBC doctoral student Aliya Webermann recently pointed out.

Webermann recounted her own frustration as an activist on the issue and cited a 2016 campus survey in which one in five students reported experiencing sexual assault. 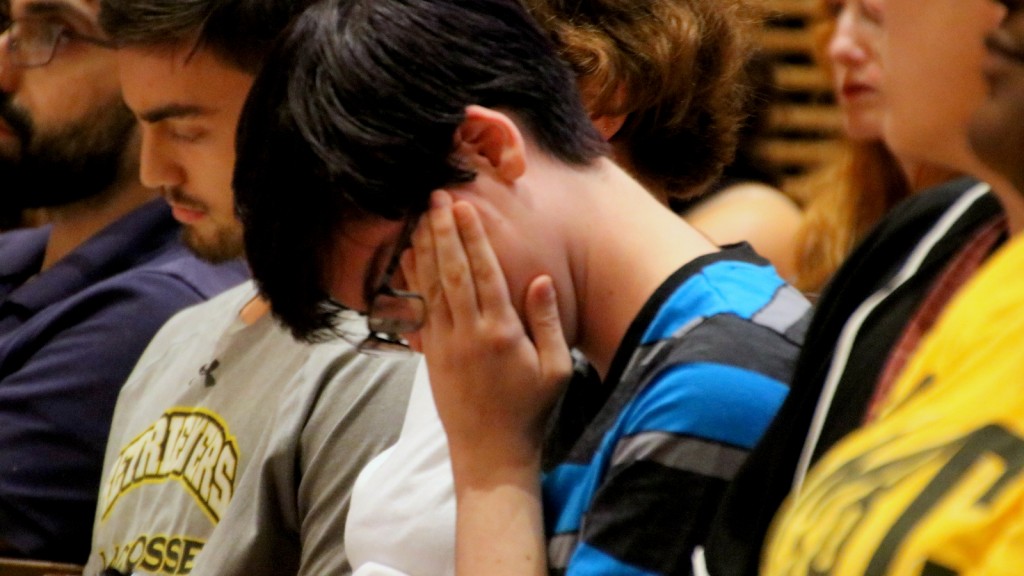 Emotions ran high at a campus “listening session” held at UMBC after two women sued the school saying it mishandled their reported sexual assault and others. (Fern Shen)

Still, there is some cause for hope about progress in addressing sexual assault on the school’s campus.

Off campus, there is little reason amid the silence and absence of accountability to be optimistic that anything will change soon.
___________________________
David A. Plymyer retired as Anne Arundel County Attorney in 2014 after 31 years in the County Office of Law. His work included defending police officers in civil cases and advising on police disciplinary matters. He also served as a prosecutor in the Anne Arundel County State’s Attorney Office.