The staff shakeup at the Employees’ Retirement System (ERS) continues with new details about a “no-show” job and brazen conflicts of interest at an agency responsible for administering the retirement benefits of about 18,000 current and former city workers.

The Office of the Inspector General revealed last week that an ERS trustee recruited his business partner to a $153,000-a-year job without disclosing their relationship.

The business partner then failed to come to the office on 157 workdays between December 2017 and August 2018.

One reason for his persistent absences? He lives in Florida, where the trustee was also making arrangements to relocate.

• Jerome L. Sanders, chairman of the ERS board, who describes himself as an “entrepreneur, investor, philanthropist” on his LinkedIn page.

Sanders and Powell aren’t the only ones dismissed from the agency.

The retirement fund’s general counsel, Ian Berger, was also ousted. As of this morning, four senior jobs at ERS are now vacant, together with the empty chairman’s seat.

Pratt, who has been the chair or vice chair of the retirement board for the last 23 years (the same period of time that she’s been city comptroller), said Friday that there are no serious problems at the agency.

“The oversight is okay. We were just unaware of what was going on,” she said.

For example, Pratt said, “they [the board] were not aware” that Sanders and Powell were 50-50 business partners in an energy company, but “they” (still referring to the board in third-person plural) had been informed that Powell was living in Florida when he was hired last December.

“He said he had an apartment in Baltimore,” she explained. (Actually, he didn’t. His ethics disclosure form, filed on April 30, 2018, lists a sole residence in Estero, Florida.)

“The oversight is okay. We were just unaware of what was going on” – City Comptroller Joan Pratt.

Pratt said the board did take action upon hearing that Powell rarely made a physical appearance at the office. “They instructed him that he must report to work unless he was visiting money managers on due diligence.”

The most important thing for now, Pratt said, is to calm the nerves of retirees and reassure them that their pension benefits are intact.

“Everyone should have confidence that their money is there and is prudently invested,” Pratt said, echoing what the board has posted on its website: 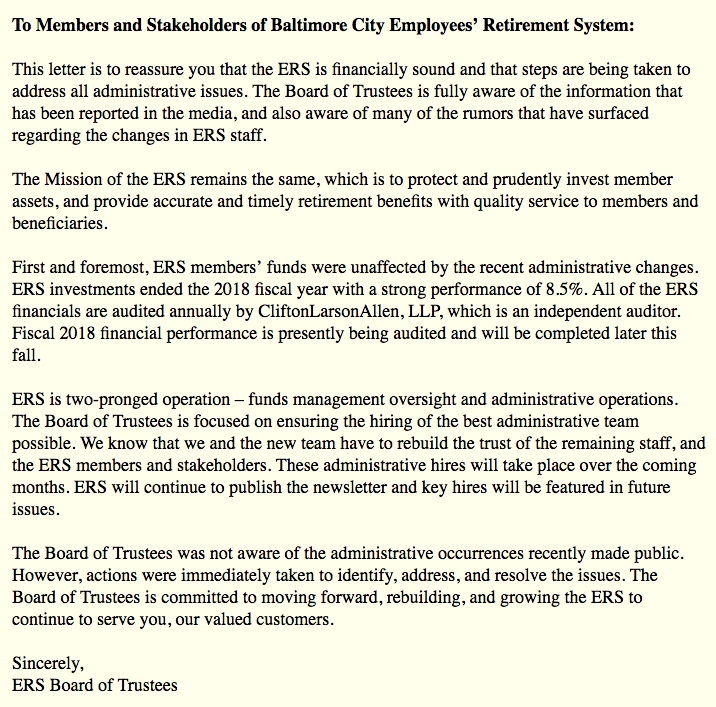 The board’s message is accurate – the system’s funds appear to be intact.

That’s less a credit to staff than a reflection that senior management had relatively little to do with investing retirement funds.

Remember that Baltimore government is never at a loss for consultants. In allocating funds, ERS relies on an abundance of money managers and hedge funds and securities lenders to decide and invest. Here’s a partial list of them: 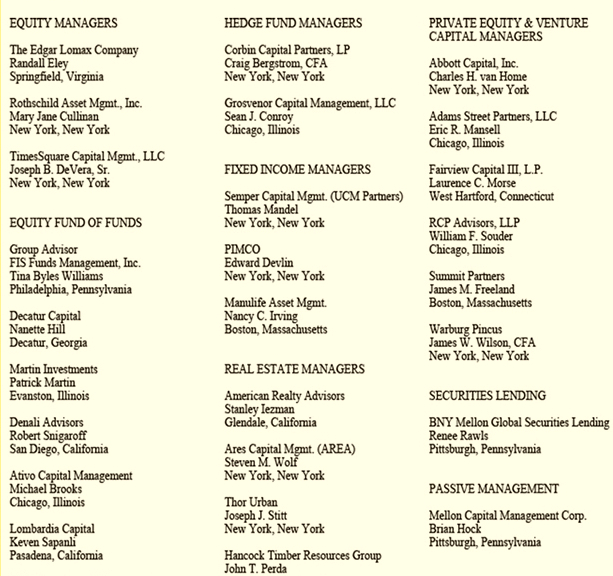 It’s this army of hired guns in New York and Chicago and California that make the key decisions about where to put the $1.6 billion in system funds.

However, what the OIG report did expose was how easy it is for a semi-independent agency to squander its administrative budget among a clique of insiders.

How easy is it for a semi-independent agency to squander its administrative budget? The OIG provides a case study.

Powell and Sanders – who could not be reached and who declined to comment, respectively – founded LVI Power in 2012 to win a spot in the  “clean energy” industry.

One of their plans was to build a $1.3 billion natural gas pipeline on the Eastern Shore. Another was to buy and sell wholesale and retail electric contracts. A third scheme was to win a gasoline and fuel oil contract with the city:

In 2015, while on the ERS board, Jerry Sanders placed a bid on a city fuel contract. (CitiBuy)

None of these ventures panned out. The city, for example, awarded the fuel contract to PAPCO, a Virginia-based company.

In fact, by 2017, LVI was “not in good standing” with the State of Maryland and on its way to forfeiture. A sister enterprise, H4 Capital, set up by Powell and Sanders to raise capital for LVI’s projects also was dormant.

He served on the advisory board of the Maryland Clean Energy Center and was part of a minority business mentorship program at the Maryland Department of Transportation.

Originally appointed to the retirement board by former Mayor Stephanie Rawlings-Blake, then reappointed to the board by Mayor Catherine Pugh, Sanders was in a perfect position to help Powell last fall.

According to the OIG report (and confirmed by Pratt), Sanders actively recruited Powell as “chief investment officer” – a newly created job to advise the board of trustees on “how well the money managers are performing,” Pratt said.

To make sure that Powell got the job, trustee Sanders “sat on the interview panel and wrote many of the interview questions,” the OIG report said.

On December 4, 2017, Powell was hired. At the same time, Sanders was preparing to move from Baltimore to Florida. “The pair planned to share a rented apartment in Anne Arundel County when in Maryland,” the OIG report noted. 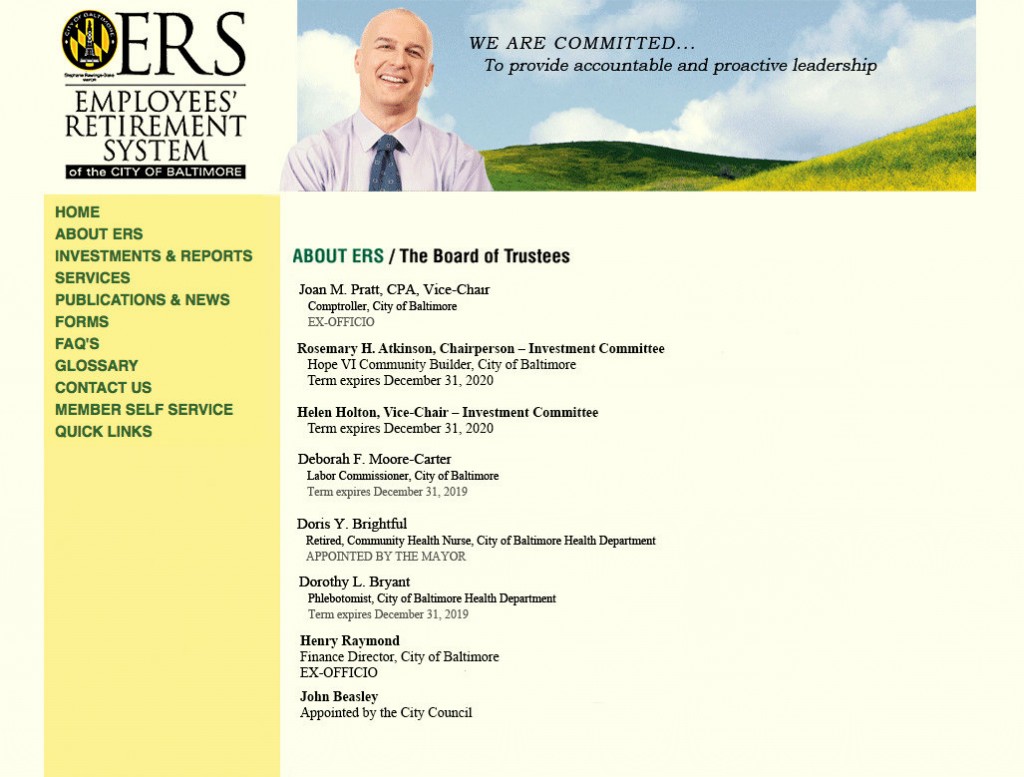 The machinations of Powell and Sanders were happening at the same time that executive director Roselyn Spencer was engaged in her own deceptions.

According to the OIG, Spencer had ordered two members of her staff to tap into a 401-K forfeiture account to pay for $218,000 worth of office renovations.

Now-ousted ERS executive director Roselyn Spencer addresses employees and retirees in the spring 2017 issue of Horizon News. Spencer was one of the city’s highest-paid officials, earning $196,044 last year, according to online records.

As in the case of Powell’s hiring, “the OIG found little or no accountability and oversight” by the board.

As the unclaimed retirement funds of employees who resign before working for the city for five years, forfeiture funds are supposed to be used for administrative expenses or to reduce the amount the city contributes to the plan.

Instead, the funds became a piggy bank for Spencer to dip into whenever she wanted things like a 98-inch flat-screen TV for a meeting room.