Addressing Baltimore leaders who have promised to overhaul the police department in the wake of years of in-custody beatings, abuse and deaths, the 50 people outside of City Hall last night called for one reform they said is essential:

The city must stop hiding the ugly details of police misconduct behind the confidentiality agreements it requires of victims in return for monetary settlements.

“We want the facts, we want the truth and we demand transparency,” said Neatrice Holmes, of Not Without Black Women, one of the community groups that have formed a coalition to end the so-called “gag orders.”

“We will not remain silent in return for hush money,” Holmes said, addressing a rally that drew community leaders and activists.

“My voice is not for sale!” Ted Sutton, of Men Against Murder added, leading the crowd in chanting the refrain. 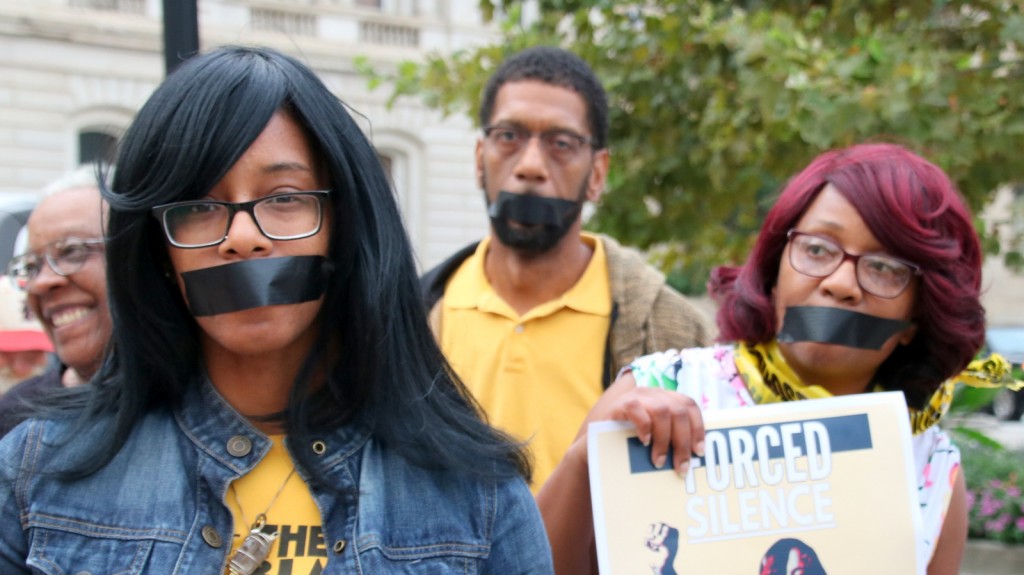 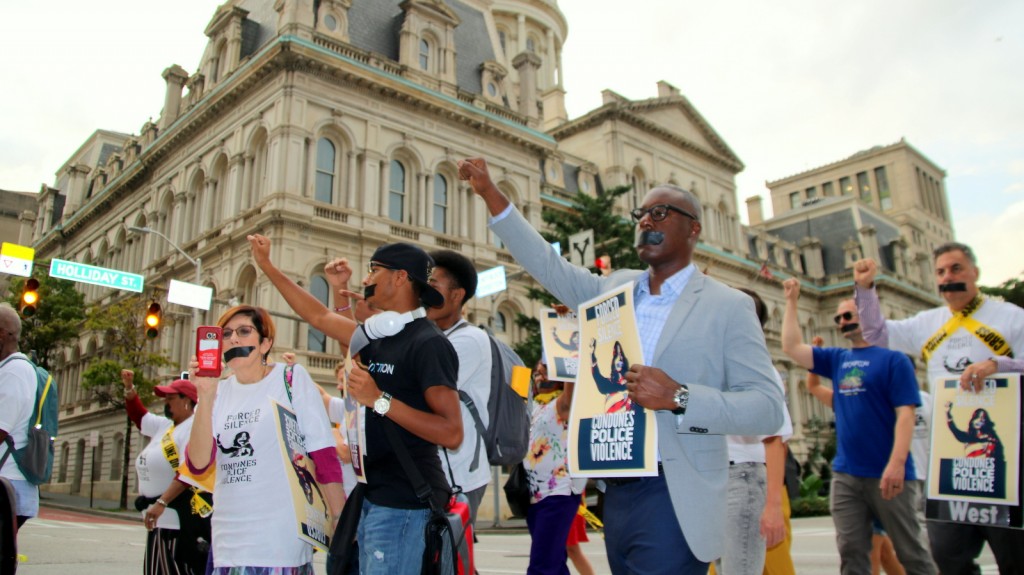 “Our voices are not for sale,” demonstrators chanted, leaving the area in front of City Hall and marching to Baltimore police headquarters. (Fern Shen)

Several speakers referenced the 2015 death of Freddie Gray after officers placed him in a police van in West Baltimore, sparking days of protests and a night of rioting.

Others brought up the corruption exposed by the federal prosecution of officers in the elite Gun Trace Task Force.

While the rally was taking place, police officials were disclosing at a City Council hearing that five additional officers were under internal investigation in connection with the GTTF.

The officers were not identified by Deputy Commissioner Andre Bonaparte and his staff, mirroring the complaint of protesters that the department operates with little accountability.

“We have to continue to let them know we are not going anywhere,” said Ray Kelly, of the No Boundaries Coalition. “We will be heard, we won’t be silenced.”

The rally was organized in parallel with a lawsuit seeking to end the gag orders that was filed in 2017 by the American Civil Liberties Union of Maryland on behalf of plaintiff Ashley Overbey and this website, Baltimore Brew.

The suit, which is pending in the Fourth Circuit Court of Appeals, argues that the non-disclosure agreements the city typically requires of police misconduct victims are unconstitutional.

They are also highly unusual, according to ACLU legal director Deborah Jeon.

No other city in Maryland requires such agreements, and neither do Washington, Boston or New York City, said Jeon, who called Baltimore “an outlier.” 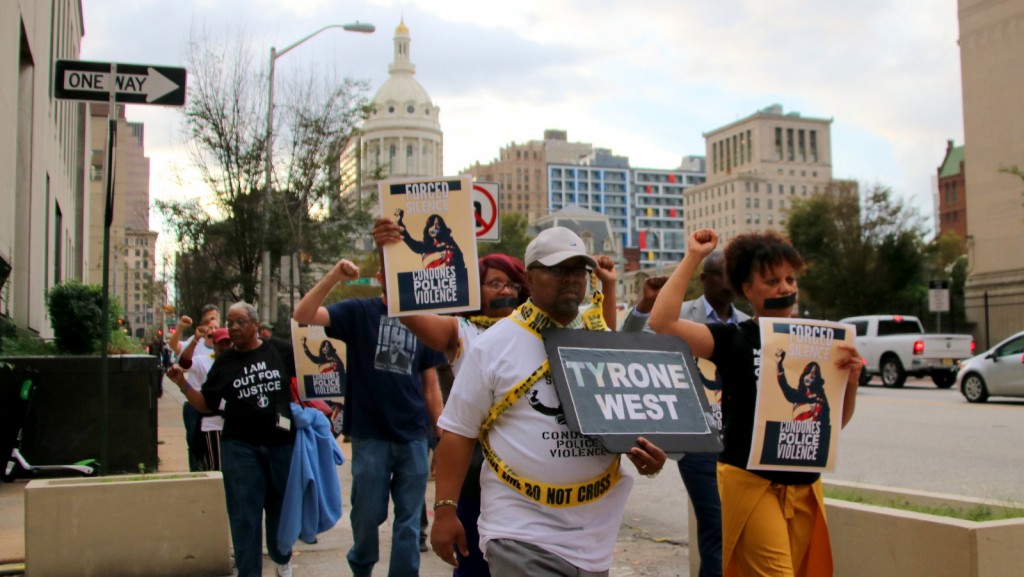 Some marchers carried signs bearing the name of Tyrone West, whose 2013 in-custody death prompted his sister to hold weekly protests – and to refuse to sign a non-disclosure agreement when the city settled the case. (Fern Shen)

Speakers called for Mayor Catherine Pugh to end the practice and to declare all past gag orders in police abuse cases to be null and void. Tre Murphy, a field organizer for the ACLU of Maryland, read the full list of demands.

“The city doesn’t need a court ruling to tell them this is wrong,” Jeon said. “At any time they could do away with this practice.”

The rules around disclosure of police abuse settlements, for which the city pays out millions annually, mean the public has few details about police misconduct, an issue that has dominated headlines for years.

“I’ll support any legislation to end the gag order,” said Sen. Jill P. Carter, the only elected official to attend the rally.

The rally started with a fiery address by Tawanda Jones, whose brother Tyrone West died while in police custody in 2013. 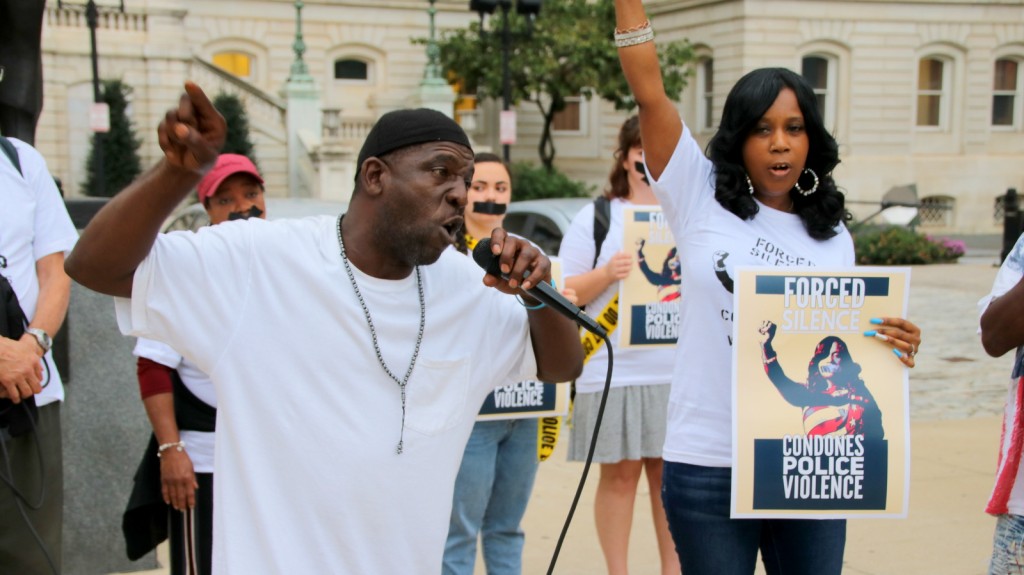 For the 272nd time, Tawanda Jones, the sister of Tyrone West, held a “West Wednesday” demonstration, to call for police to be held accountable for his death in 2013. (Fern Shen)

Jones refused to be part of a cash payment that other family members accepted after his death, preferring the freedom to speak out and call for the officers involved to be held accountable.

For 272 weeks, she has protested on the streets of Baltimore, bringing signs, supporters and a bullhorn to her weekly “West Wednesdays” rallies.

“There is no deal when they kill your loved one, let’s be crystal-clear,” she said last night.

If she had signed the “gag order” to obtain the settlement money, Jones said she would not be able to talk about what she found that contradicted the official account of her brother’s death, such as “there was no drugs in his system.”

“I was just horrified by all the things I learned that they did,” she said. “And I’m supposed to sit at the other side of the table, and you want to throw a price out at me?”

After the rally at City Hall, the group marched along Fayette Street to police headquarters, mouths sealed with black plastic tape.

Gretchen Tome, a clinical social worker, said it is important for those traumatized by violence, including police violence, to be able to tell their stories.

Ending the use of gag orders “is a way to let the people speak and let our city heal,” said Tome, of Runners4Justice.

How to convince city leaders of the importance of truth-telling about police misconduct? 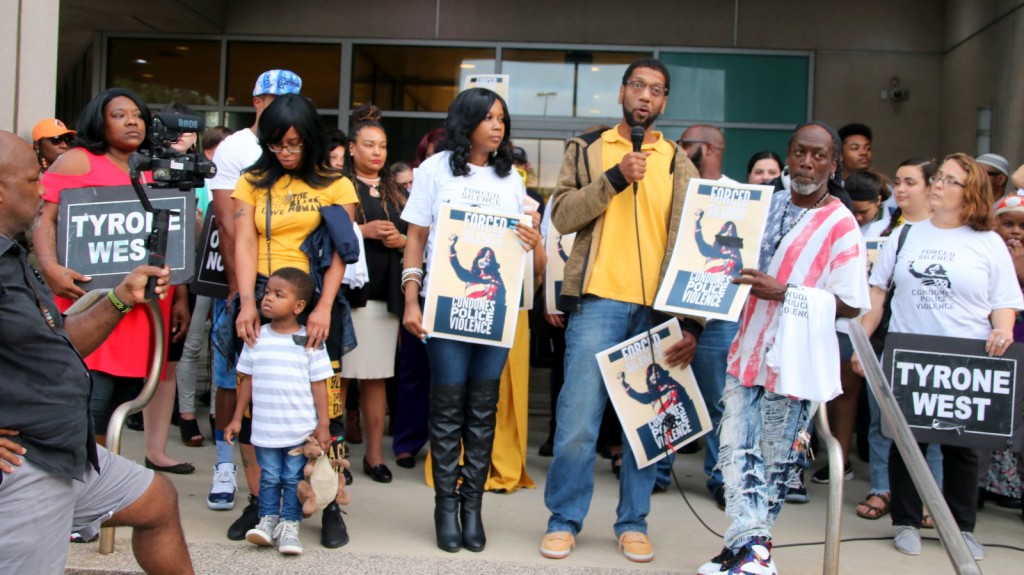 Ray Kelly, of the No Boundaries Coalition, addresses the crowd in front of Baltimore police headquarters. (Fern Shen)

At a forum in the War Memorial Building after the march, the suggestions ranged from protests outside the Exelon Building to shutting down the legislature.

“We need a Fight Police Brutality Day,” said longtime city activist Leo Burroughs Jr. “Whatever it is, it’s got to be confrontational.”

City leaders will only act, several said, if they detect a strong public demand for more transparency.

“It’s extremely important to tell these stories,” Brew reporter Mark Reutter said. “And you have to be able to give the storytellers – the media – the right to tell them.

“Otherwise it’s no different than in Russia or China or what some people want to do in this country,” he continued. “Remember, the media is not the enemy of the people.” 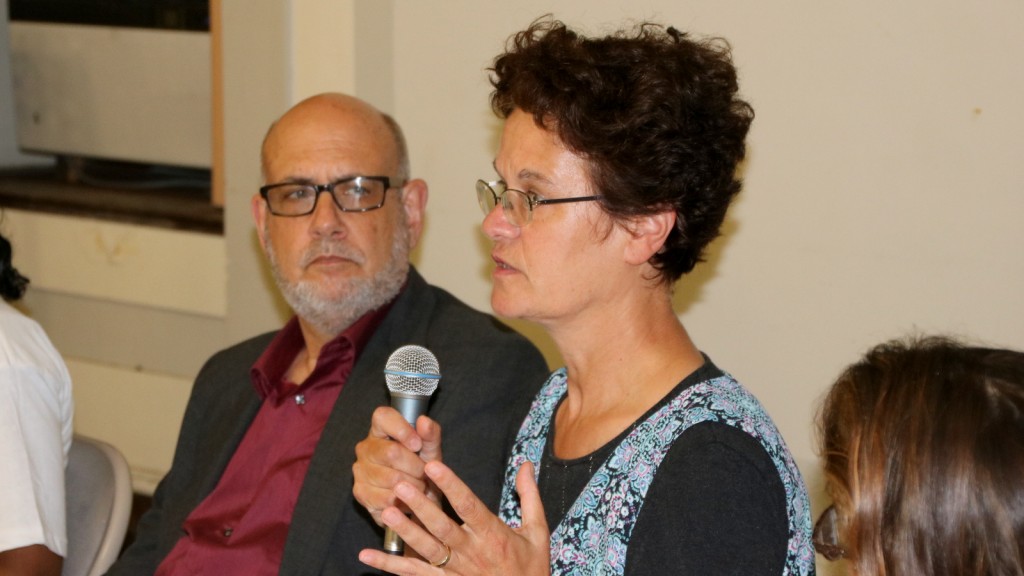