Andrew Kleine cut an interesting figure as Baltimore’s budget director. Straight-laced and somber before the City Council, rattling off facts and slinging numbers from PowerPoint slides, who knew he saw himself as a revolutionary.

“If I were a superhero, I would be called Good Government Guy,” he proclaims in City on the Line, part memoir and part primer on what he calls outcome budgeting.

“When a mayor needed help, I could remove my jacket and tie and rip open my button-down to reveal a T-shirt with GGG emblazoned across the chest.”

Kleine needed all the idealism (and wry humor) he could muster when he first arrived at the budget office in 2008 after a stint in the bureaucratic swamps of Washington.

This is what he found:

“One analyst was running an eBay business selling sports memorabilia; another had an alcohol problem. When I suggested an office potluck to get to know people better, I was told that those had been discontinued after someone discovered cat hair in a casserole.”

But Kleine wasn’t discouraged. He hired some new folk and, he says, set about dismantling “the heavily fortified silos of agency budgets and replacing them with large pools of funding dedicated to the outcomes we seek.”

Those outcomes he broke down into slogans borrowed from the pr shop of Sheila Dixon, the mayor who hired him and for whom he lavishes praise as a practical do-gooder:

Kleine grouped city spending into these broad categories, which he then divided into various outcomes whose performances could be objectively measured.

On paper, it looked very tidy. In practice, less so.

• City on the Line: How Baltimore Transformed its Budget to Beat the Great Recession and Deliver Outcomes, by Andrew Kleine (Rowman & Littlefield), $33.00 at Barnes & Noble.

It wasn’t long before he butted heads with Alfred Foxx, director of public works. Foxx was direct after he invited him to lunch. “I heard that you came to Baltimore to experiment with outcome budgeting, so you could write a book about it.” Kleine quotes him as saying.

“Oh, the irony,” the author continues. “The question is hilarious now, but at the time I had no thoughts of writing a book and was insulted by the rumor. It was a way of telling me that outcome budgeting was nice in theory, and now it was time to get to old-school budgeting – or something like that.”

As so often happens in Baltimore government, Foxx’s tenure at public works was short-lived. He was replaced by Rudy Chow, a sanitary engineer who didn’t like being second-guessed by an inquisitive numbers cruncher.

“When the two of us got together,” Kleine says, “We didn’t play patty cake.” In the fall of 2016, for example, the subject of street sweeping came up after a CitiStat meeting showed that city-collected street debris, as measured by tonnage-per-mile, was decreasing.

Foxx was replaced by Rudy Chow, a sanitary engineer who didn’t like being second-guessed by an inquisitive numbers cruncher.

If the trend continues, Kleine wondered, shouldn’t DPW trim the budget for street sweeping and redirect money to other sanitary problems?

“Chow would have none of it, insisting that street sweeping is a service, not an outcome,” which only demonstrated to Kleine how “many agency heads will go on running their services without questioning, or being questioned about, whether those services are leading to the outcomes we want.” 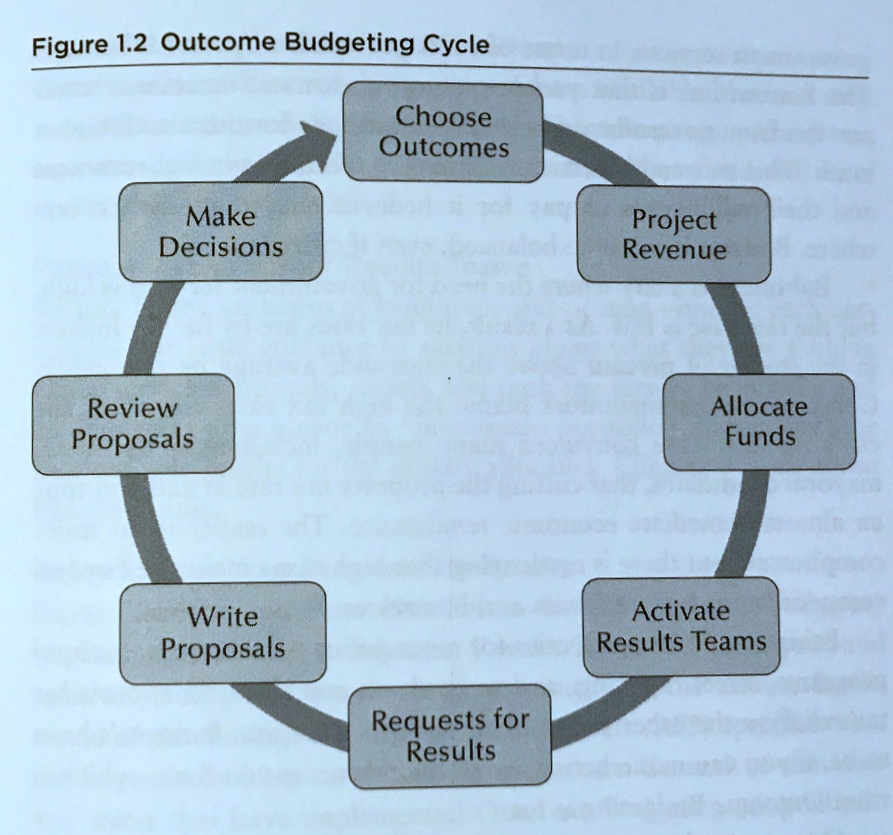 AROUND WE GO: By choosing the outcomes of programs first, a government can better assess results and make a “high-value” decisions, Kleine argues. (Figure from “City on the Line”)

If you’re crusading for outcome budgeting – that is, getting the outcome you want from the budget you’re given – you need believers.

And Kleine says he did win acolytes, people like William Vondrasek, at Recreation and Parks, and Michael Braverman, at Housing and Community Development, who measured the efficacy of programs and assayed their overall worth.

Little also was one of the most reliable members of the “Good Government Book Club” that Kleine started in 2010.

The GGBC (Kleine shares the “silo’s” affinity for acronyms) exemplified “the culture of learning and continuous improvement that outcome budgeting needs to thrive.”

The books that the dozen or so club members tackled covered everything from teamwork (The Boys in the Boat) to communication (Made to Stick) to toss-out-all-the-dishes tracts (Extreme Government Makeover and Change or Die).

Spurred on by the budget crunch that followed the Great Recession, Kleine helped pare down the cost of unfunded pension liabilities and developed a 10-year budget plan that included modest decreases in the property tax rate of homeowners.

He didn’t do it alone – there were (naturally) high-paid consultants involved and definite credit is owed to former Mayor Stephanie Rawlings-Blake. But it was Kleine who spearheaded the process and threaded the eye of the needle.

Other initiatives didn’t go so well.

“Boy, I tried to get rid of the mounted unit. I thought I had eliminated a police helicopter. I came close”  – Andrew Kleine.

A planned audit by his office of Police Department overtime was never put into action by Rawlings-Blake, and he lost other battles to the blue bureaucracy on East Fayette Street.

“Boy, I tried to get rid of the mounted unit,” he said in an interview. “I thought I had eliminated a police helicopter. I came close.”

Asked to  objectively measure his tenure in Baltimore, Kleine told The Brew, “I had no illusion that outcome budgeting was going to trump politics completely. What I was aiming for was to increase the output quotient, the percentage of the budget that was informed by actual data and analysis.”

His tenure came to an abrupt end last year. An item in the Board of Estimates agenda cited a former budget director (who turned out to be Kleine) whose position would be overlapped for six weeks by Bob Cenname, who now serves as Catherine Pugh’s budget director.

His departure was voluntary, Kleine says, and the six-week co-directorship allowed him to reach, for pension purposes, his 10-year anniversary through accrued leave time.

For the budget insurgent, the good fight was over when, post-Freddie Grey, Rawlings-Blake announced that she would not seek re-election and instead would use her remaining 15 months in office focused on the city’s future and not her own.

“My disappointment grew as it became apparent that in her long lame-duck period, Rawlings-Blake would be going through the motions. Her heart wasn’t in it. The ‘innovation mayor’ was gone,” he writes.

Asked to offer his assessment of Pugh – specifically, how much “outcome” is coming out of her management practices – Kleine politely takes a pass.