The sergeant in charge of the Baltimore Police Department’s Marine Unit handed out overtime to officers who didn’t earn it, covered up crashes and environmental crimes his officers committed, and harassed and finally locked out a whistleblower, according to a lawsuit filed in federal court.

At the center of the suit, filed last Friday by Jeffry E. Taylor, an 18-year veteran of the department, is an allegedly botched effort to remove a cabin cruiser called “Danger Zone” from its mooring in Fells Point after a friend of a top police official complained the boat was “an eyesore.”

Taylor sued Sgt. Kurt Roepcke, who commands the Marine Unit, along with three former police commissioners, Major Frederick Gilbart and the city and state, saying they retaliated against him after he brought wrongdoing to the attention of police brass and the city’s inspector general.

He was assigned menial tasks, threatened with transfers and called “a rat/snitch.”

After he complained about the salvage operation, Taylor said, he “was ostracized, threatened, teased and subjected to severe and pervasive harassment and retaliation.”

Fellow officers refused to work with him and assigned him to menial tasks, threatened to transfer him back to patrol and called him a “rat/snitch,” Taylor alleges in the suit.

A spokesman for the Baltimore Police Department replied to an email about the suit by saying Roepcke worked all night on harbor detail and “we will probably not have anyone to speak with you today regarding this matter.”

Taylor’s claims are reminiscent of former BPD Detective Joe Crystal’s treatment half a decade, ago after he reported a sergeant and fellow officer for beating a drug suspect.

Soon after, someone left a dead rat under his car’s windshield wiper.

Other claims echo the overtime fraud uncovered in the recent Gun Trace Task Force prosecution. Last year, as nine city cops were convicted of robbery and other crimes in those cases, court testimony described as “common practice” commanders incentivizing officers with “slash days” – overtime pay for no work.

The new suit says that practice was prevalent in the Marine Unit as well.

Taylor’s trouble started in the late fall of 2016, the lawsuit says, when an acquaintance of Melissa Hyatt, then a rising star at the BPD, complained that a cabin cruiser called “Danger Zone,” moored off Fells Point, was an “eyesore.”

“As a result, Col. Hyatt instructed Defendant Roepcke to have the boat removed, despite the fact that the boat was not illegally moored,” the suit says.

Hyatt, who left the force early last year and is now head of security at Johns Hopkins, declined through a spokesman to comment.

Taylor, who had been with the marine unit for about a year, refused to work on the “Danger Zone.”

The boat, then sitting atop pilings at low tide, had never been cited for any violations, nor had the owner, been ordered to move it, according to the complaint.

“The salvage operation was outside of the authority of the Marine Unit,” the suit says, alleging that commercial salvage operators were better equipped to handle the tricky and dangerous job.

BPD did not inform the Maryland Department of Natural Resources or the Coast Guard of the oil spill, the suit says.

The operation went badly, according to the lawsuit. Early on, the police impaled the vessel on a piling, pinning it in place and causing it to leak gas and oil into the harbor.

The cops deployed a boom to contain the spill, but the boom wasn’t made for that purpose and so it was not effective. The police did not inform state environmental authorities or the Coast Guard of the spill, the suit alleges. 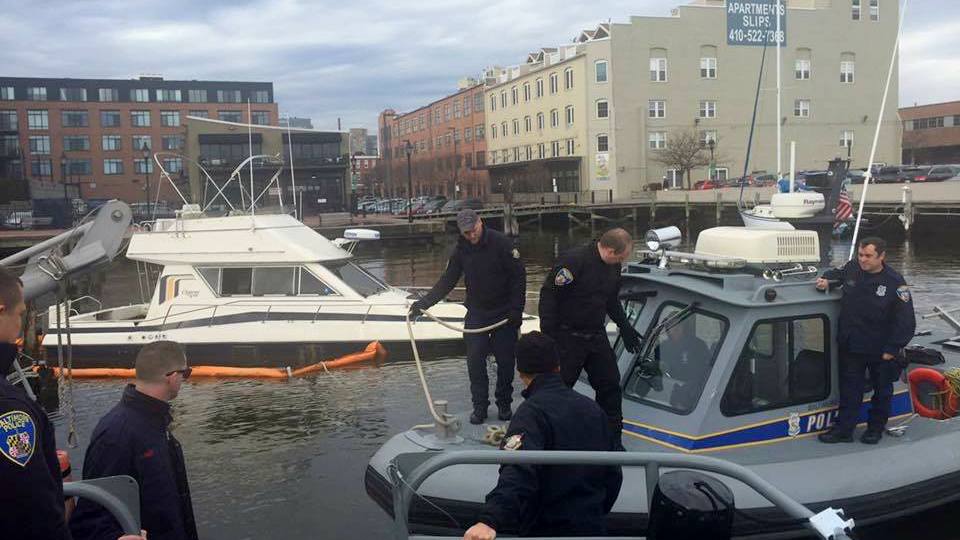 The Marine Unit and Urban Rescue Team work to clear pilings as part of a months-long operation to remove “Danger Zone” from its mooring off Fells Point. (Facebook)

The Marine Unit kept at it, eventually celebrating the operation on its Facebook page.

“On December 6, 2016, the BPD Marine Unit and URT responded to a call for service for an abandoned boat sunk on top of pilings,” says the introduction to photos of the project.

The owner was told to remove the boat, asked for time, but eventually “ceased contact with the BPD Marine Unit.”

“This was the start of a multi-month operation to remove this boat which became an eyesore to the Canton Waterfront Community and a hazard to the waterways,” the post said, including a note about the challenging water temperature (“ranged from low to high 30’s”) and water visibility (“less than 1 foot”).

The lawsuit paints a starkly different picture of ineptitude and waste.

In late January of 2017, Taylor tried again to get Roepcke to stop the operation, advising Roepcke’s boss, Lt. George Hauf, that there were salvage companies that would take over the job, “possibly at no cost to Baltimore City.”

Taylor got nowhere with this. 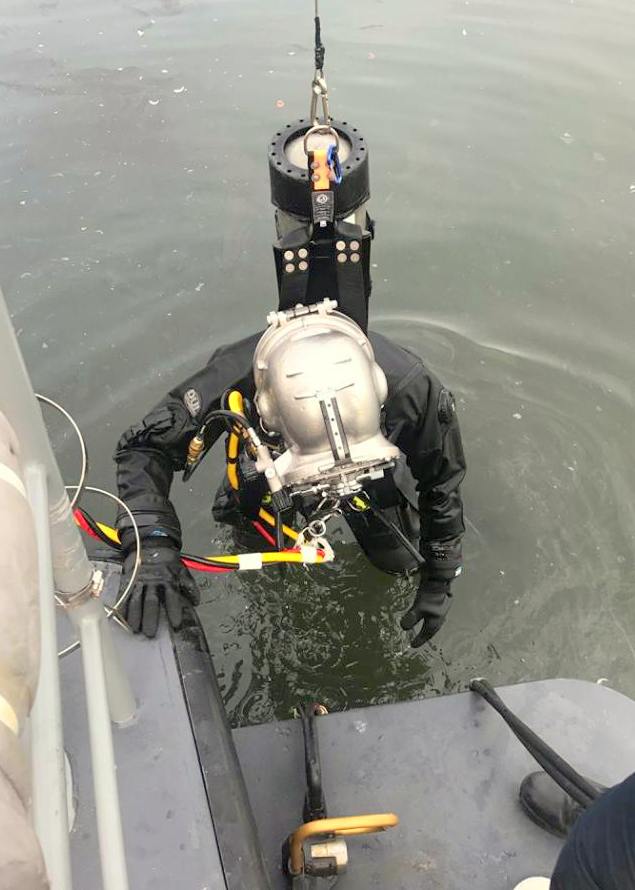 Sgt. Roepcke with the underwater chainsaw used to cut pilings away from the hull. (Facebook)

By then, neighbors started noticing, and some complained to Taylor about the misbegotten salvage operation. Some supplied photos.

Taylor sent these to Maj. Milton Corbett—outside his chain of command:

“Plaintiff reported to Maj. Corbett the ‘Danger Zone’ salvage was an improper use of BPD manpower and equipment in that Defendant Roepcke had taken twelve (12) officers, two (2) boats and a helicopter out of service outside the BPD’s proper duties to engage in the improper salvage operations.”

It was these complaints, Taylor’s lawsuit says,  that triggered the harassment, ostracism and, eventually, trumped-up infractions leading to poor performance evaluations.

Meanwhile, Roepcke was himself violating the rules.

The suit alleges he was “giving overtime and comp time to officers working the night shift when they were put on 12-hour shifts they did not work” and using city money to buy an underwater chainsaw from one of his friends instead of using the city bidding process.

Someone in the Marine Unit crashed a trailer and someone else crashed a boat. Both incidents were covered up.

It also alleges he was “using BPD officers to work on the ‘Dauntless,’ a Marine Unit vessel, to conceal the fact that the motors had been damaged during the ‘Danger Zone’ salvage operations,” according to the lawsuit.

Someone in the Marine Unit crashed a trailer and someone else crashed a boat. Both incidents were covered up, the lawsuit says.

The suit also alleges that Roepcke:

• “Made purchases for boats that were not City-owned by using legitimate, City-owned boats with valid shop numbers to mask the fraudulent purchases.”

• “Engaged in frequent swaps, trades and other illegal transactions to acquire dive equipment without adding the items to BPD’s inventory or assigning a required property number.”

• “Was fraudulently putting in work hours for himself and members of the Marine Unit when they were not working and not entitled to pay (i.e. overtime and ‘slash days’).” 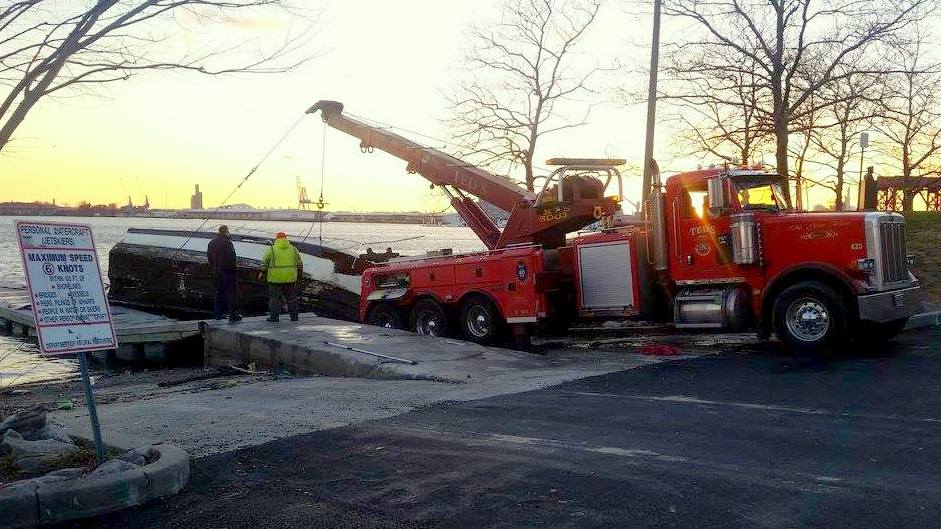 Photos posted on July 2017 shows Danger Zone being hauled out of the water at Canton Waterfront Park. (Facebook)