What would Morris Martick have said, upon learning that a room full of architects and planners had a lengthy, serious discussion about whether his building at 214 West Mulberry Street was “historical?”

Or something like that. Then he would have headed back upstairs to the kitchen at Martick’s Restaurant Francais to finish the bouillabaisse.

The building, which new owners want to demolish for an apartment-and-restaurant complex, got a reprieve yesterday when the city’s preservation board ruled unanimously that it does “actively contribute to the historic nature of the Howard Street Cultural Historic District.”

The two-story brick structure known for 40 years as a place to find French fare, bohemian patrons and a sui generis owner, continues to meet the standards for designation as a local landmark, the Commission for Historical and Architectural Preservation (CHAP) said.

The decision, which followed the city staff’s recommendation, was a blow for Park Avenue Partners, the group formed to redevelop the dilapidated block on Baltimore’s Westside.

But it was not a surprise, said one of the principals, in an interview with The Brew afterwards.

“It does fit some of their criteria,” said Vitruvius president Chris Janian, who represented Park Avenue Partners at the hearing.

Park Avenue Partners will continue to pursue demolition of the building “due to its incredibly deteriorated state and financial infeasibility,” Janian said.

Addressing the board, city planner Stacy Montgomery said the building meets three of the four criteria for designation:

• The building’s history is associated with events that have made a significant contribution to the broad patterns of Baltimore history.

• The building embodies “the distinctive characteristics of a type, period or method of construction.” 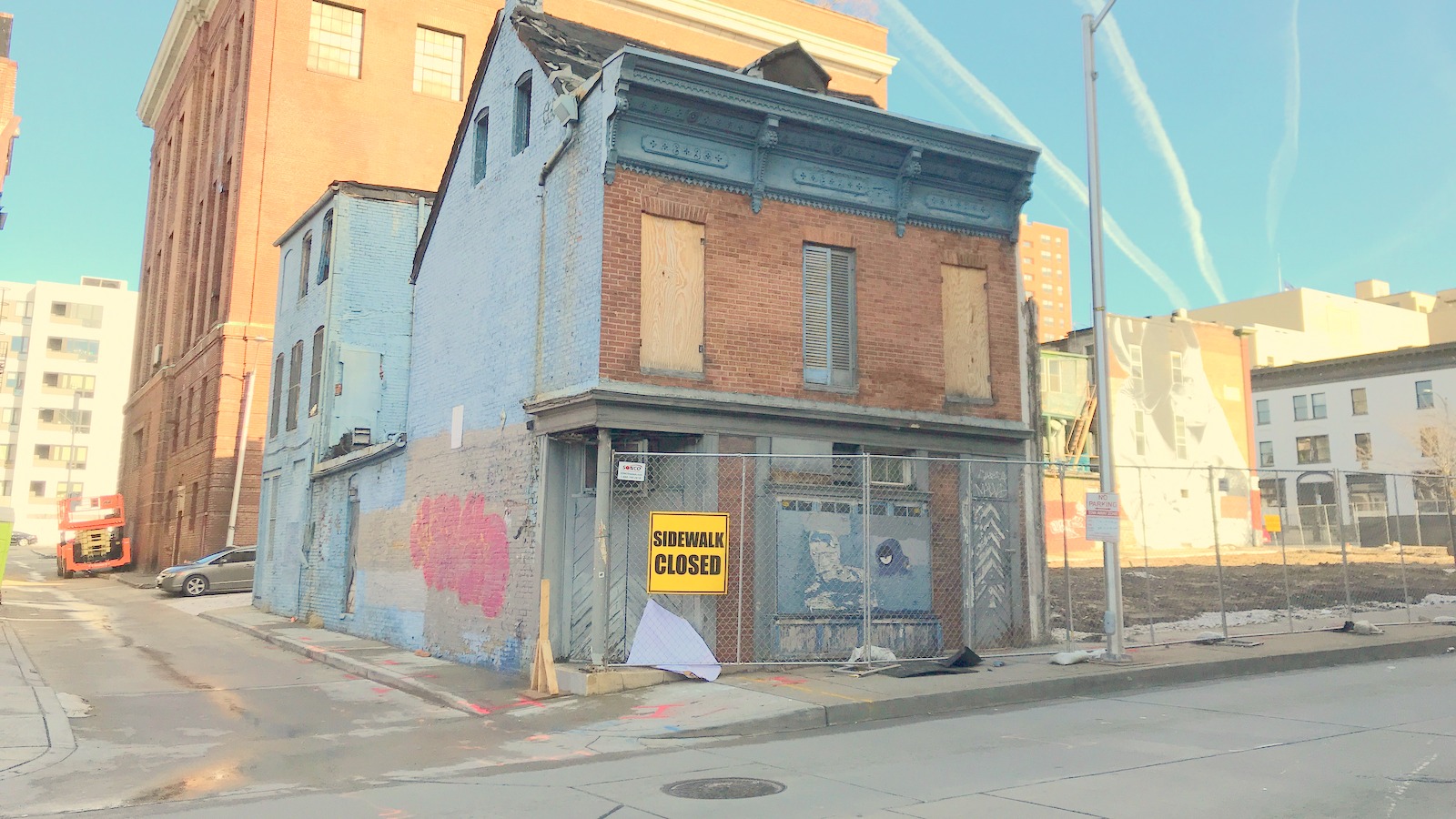 This building on Baltimore’s West Side, where Martick’s Restaurant Francais once celebrated bohemians and bouillabaisse, is being eyed for redevelopment. (Chase Hoffberger)

A second demolition hearing must now be held to make a determination of financial hardship for the owners – that is, what sort of expense and delay would Park Avenue Partners endure should they not be granted the rights to raze the property. CHAP’s next hearing is set for February 12.

Janian said his group’s plan for redevelopment will help, not hurt, the currently rundown area.

“We’d rather contribute to the revitalization of the neighborhood than to have vacant historic buildings sitting empty for another 10 years,” he said.

Central to Montgomery’s argument was the unique nature of the building itself and what went down inside its walls during a century-and-a-half of operation.

The building dates back to the 1850s, making it one of the few remaining structures in Baltimore from the time before the Civil War, she said.

It is a gable-roofed, Federal-style row house – again a local rarity – with its iconic blue cornice added after its original construction.

Montgomery was unclear on the early uses of the property, but noted that the Martick family moved into the building’s second floor in 1917 and subsequently opened a grocery store downstairs.

She said there were “varying accounts” about the nature of business being conducted on the premises during the years of Prohibition.

Morris Martick would regularly imply that it was a speakeasy. “I’m. . . pretty sure it was,” Montgomery said.

The Marticks applied for a liquor license immediately after the repeal of Prohibition, and from there opened Martick’s Tyson Tavern that operated until Morris converted the space into his restaurant in 1970.

The proud son of Henry and Florence Martick, Morris took over the place after his mother died in 1959 and later turned it into French restaurant.

Leonard Bernstein used to play the piano at the bar. Billie Holiday once joined the house jazz band.

Montgomery noted how Martick’s helped introduce continental cuisine to what Morris considered a “burger and potatoes kind of town.” She recalled the menu’s exotic beers and wines, Dixieland music, arts and culture.

She noted how Leonard Bernstein used to play the piano at the bar when he’d stop in, and that the singer Billie Holiday once joined the house jazz band. She said John Travolta ate there one time and that the restaurant was a choice haunt of John Waters. 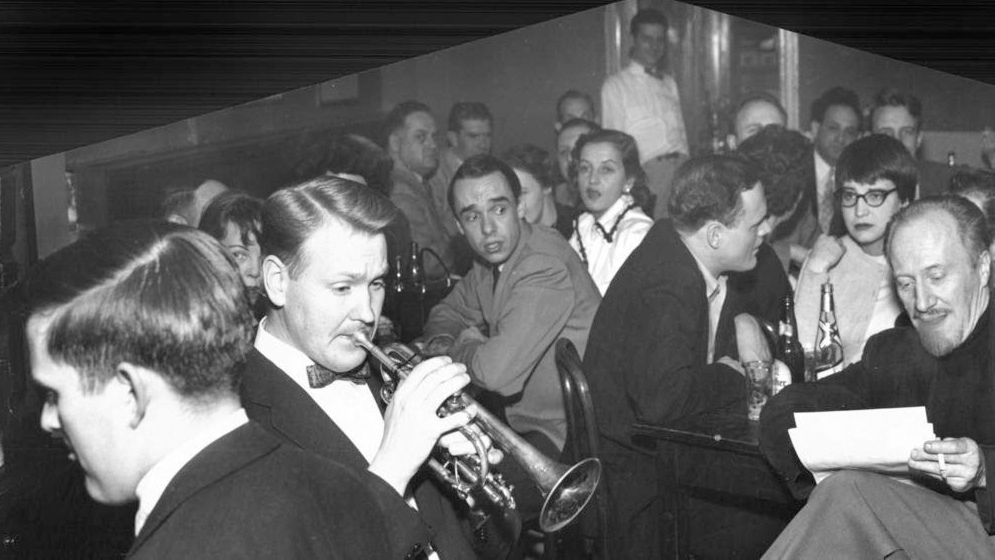 In the restaurant’s heyday, you could find original art work and live music at Martick’s.

She also spoke of Morris and his eccentric character: how he taught himself to cook after hiring a French chef (who didn’t pan out and had to be fired). And she mentioned the detail everyone remembers – the doorbell “that was pretty famous, that you had to ring to get in.”

Montgomery also said the building now shows signs of serious deterioration. The windows are missing, for instance, and the sides are boarded up.

Despite structural issues, however, the staff concluded that the building maintains its architectural integrity, since most of its most notable features – the blue cornice and corner door, for example – remain intact. 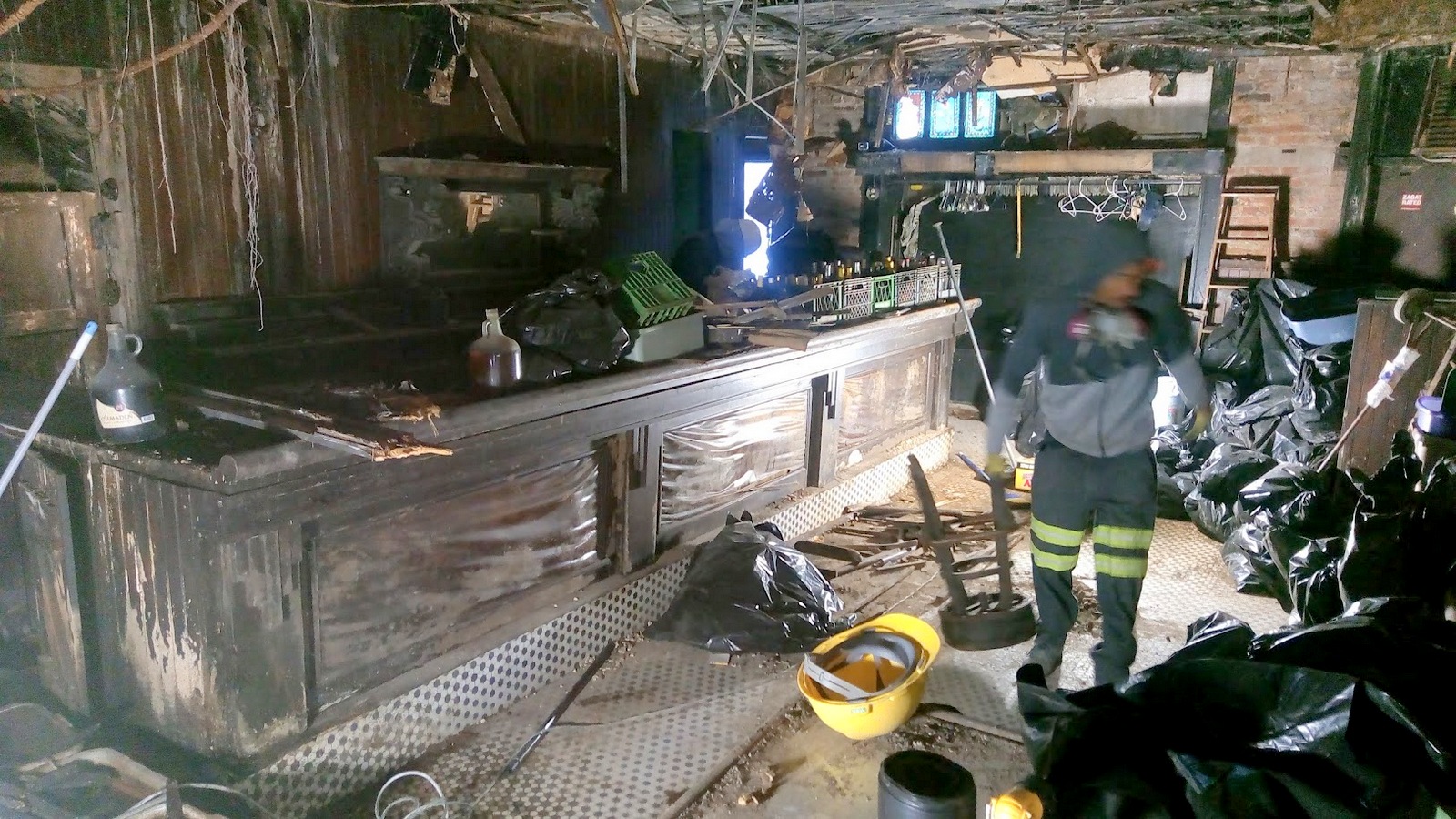 The long, wooden bar at the former Martick’s Restaurant Francais as it looked last year when new owners cleaned out the premises. (Jabber Group)

Janian acknowledged the unique history of the building. But he noted that the Marticks, Brad Shapiro, the building’s previous owner, and he and his partners had all attempted to conceive ways to preserve the building without incurring a significant financial hardship, to no avail.

Park Avenue Partners’ plan is to fold the 214 West Mulberry property into a block-wide redevelopment project, to include apartments, restaurants and retail along the block between Mulberry Street and Wilson Alley from Park Avenue to Tyson Street.

He noted that the parcel falls within the Howard Street Cultural District, but questioned what exactly that designation can be used to preserve, considering how many vacant buildings are there.

Janian said the project has the support of City Council President Bernard C. “Jack” Young and 11th District Councilman Eric Costello as well as the Market Center Merchants Association and other neighborhood entities.

CHAP was not swayed by Janian’s presentation. The body only conferred for a short period, mostly to issue recollections of their own about Morris and Martick’s.

Larry Gibson, who presided over the meeting, recalled the restaurateur’s distinct character, and the time Morris ran for the House of Delegates.

“This is a cultural landmark,” Mosca said. “One with a vast history, and people who remember it very well.” 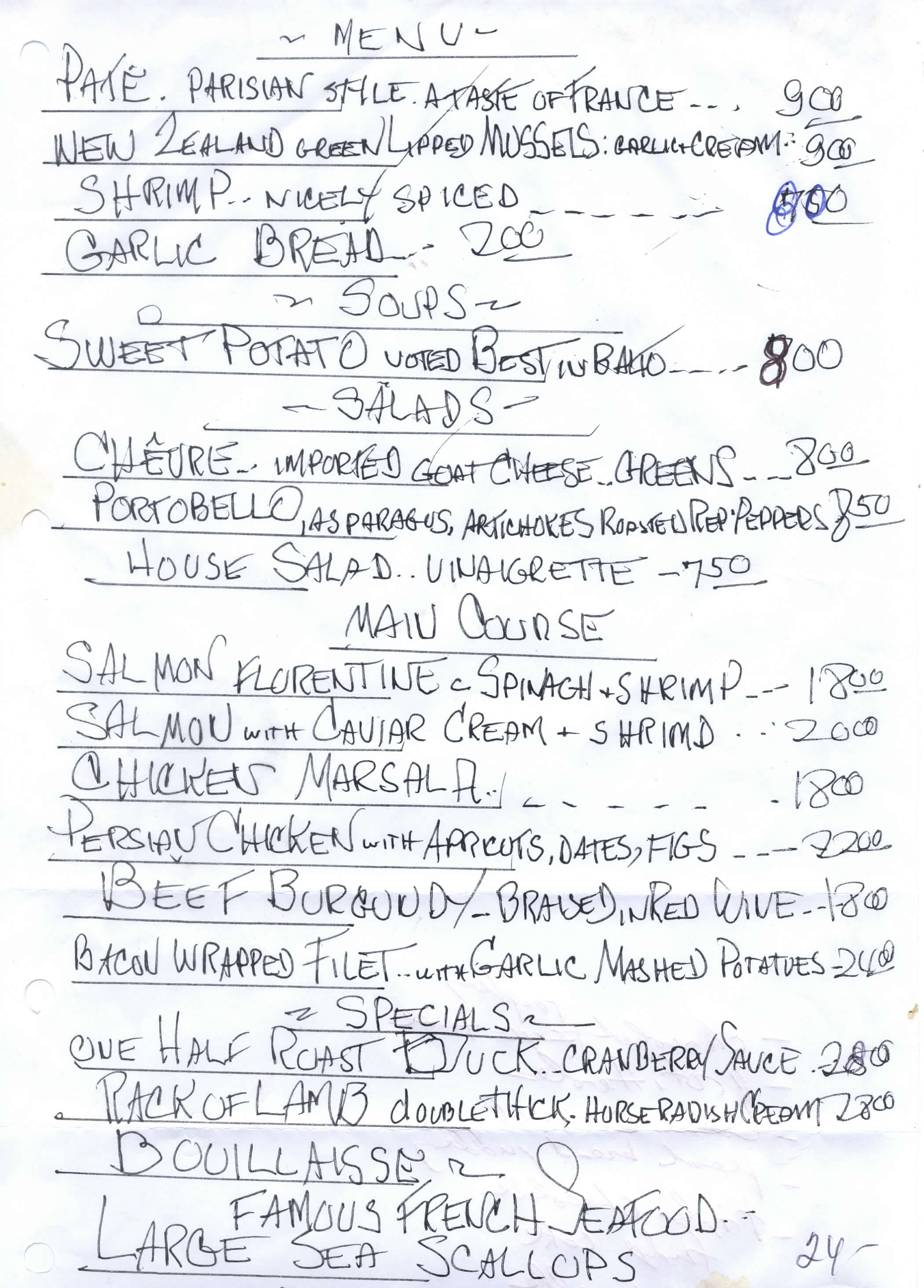 Martick’s handwritten menu in 2008. Missing were the fabulous deserts – crême caramel, peach bread pudding and profiteroles – he made from scratch. (Courtesy of Mark Reutter)

If the building were rehabbed, he said, young people would buy into the historic vibe, old people would remember it and Park Avenue Partners could “make a lot of money.”

This prompted Janian, speaking from his seat in the audience, to say that he will provide financial documentation of the challenge of preservation at the next hearing.

A few other commissioners spoke in support of Gibson and Mosca’s sentiments. Gibson took back the floor to establish that the only question before CHAP on Tuesday was whether the building contributes to the historical aspect of the district.

“It does,” he said. “Is that even a debatable question?”

He invited anyone in attendance to speak against that conclusion. No one took the floor.