Meet the people. Meet the people. That’s how you turn a broken police department into a good one, says Michael S. Harrison, Mayor Catherine Pugh’s choice to become Baltimore’s next police commissioner.

On Monday, his first day as acting commissioner, it took hours of appearances before the media, City Council members and other officials before Harrison actually had an opportunity to connect with the people.

His message: BPD can become a world-class law enforcement outfit by communicating with the community, so residents, for example, can get to know their beat cops by first name.

At last night’s “meet and greet” at Forest Park High School, the retired New Orleans police chief took 90 minutes introducing himself to a crowd that seemed as eager to meet him as they’d be to reject him should he later fail them.

Whenever somebody would ask, Harrison said he was having a great time.

Asked about the department’s myriad problems, he responded, “I’m here now. That’s new, too. It will be about the culture change. What you’ve heard, and what you’ve repeated to us, is unacceptable and indicative of an old culture that probably still remains.”

Accountable at Every Level

A big man with a barrel chest, Harrison sat calmly in an uncomfy-looking chair and listened respectfully to criticism and sometimes long-winded questions.

He said nice things about his wife. He knew when and how to crack a joke.

He spoke holistically about policing, saying officers who get to know  kids in the neighborhood will train the next round of officers because kids will grow up wanting to be cops.

“I told my team today, ‘We will change, we will reform, we will get better because it’s the right thing to do.’”

A “world-class, first-class recruiting organ” happens when officers do work with “empathy and compassion,” he said.

“That is our philosophy,” he continued. “I told my team today, ‘We will change, we will reform, we will get better because it’s the right thing to do.’”

He repeatedly came back to his anti-corruption work at the New Orleans Police Department, saying that’s what makes him the ideal candidate to navigate BPD’s murky waters, because both departments are under federal consent decrees to curb illegal and discriminatory policing.

“We will get better because it is the right thing to do,” he said, explaining that “the lessons learned in New Orleans, the strength of discipline which brings about culture change, creates systems and measures of accountability that hold people accountable at every level. So that leaders can create more leaders.”

It was difficult for questioners to get much of substance from the acting commissioner, who described himself as “hard on crime but soft on people.”

He derided “war on drugs policing,” but cited “a direct correlation” from “drugs to money to violence to guns,” and later recommended harsher penalties for illegal gun owners.

“We will get with our leadership to find the best way to work with citizens to figure out how to enforce that, whether there are consequences that make it a deterrent for citizens to engage in that. And certainly, any opportunity for us to engage in human trafficking or people who are victimizing others against their will, we’ll want to deal with that. Some of it will be prostitution for the sake of prostitution. Some might be human trafficking. So that’s an assessment we need to make, to know what we’re dealing with.”

He deferred on how he would handle other specific issues, such as when school custodian John Dixon asked him how he’d clean up Lexington Market, a well-known haven for drug dealing.

Harrison replied, “We’re taking notes about the location that you just described, so that I can get that to the appropriate people.” 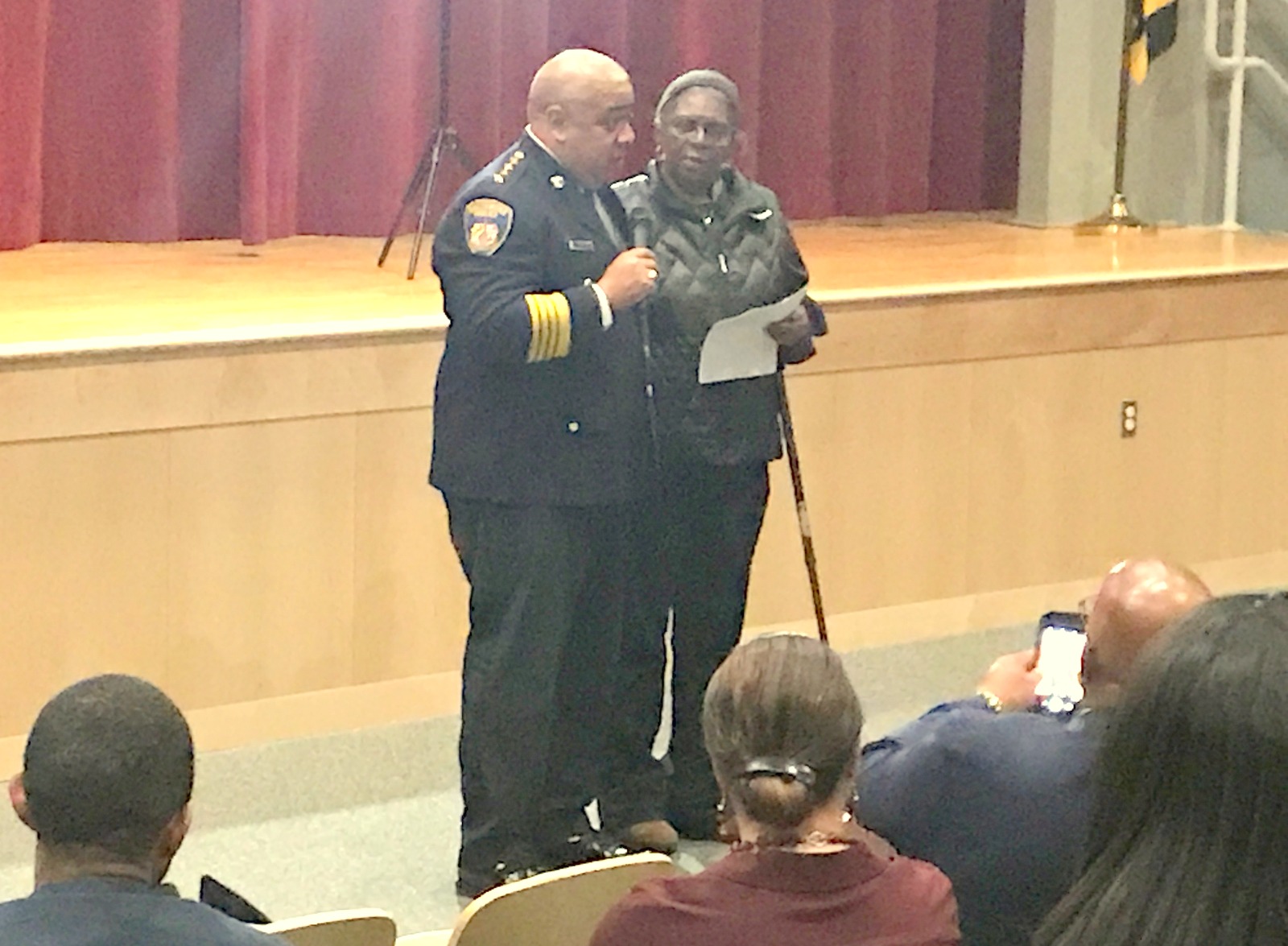 Harrison apparently will have to mess up real bad to spoil his chances for confirmation by the City Council, which formally received his nomination from the mayor yesterday and is expected to vote on his appointment next month.

Earlier in the day, members Mary Pat Clarke, Zeke Cohen and Eric Costello joined Young at the press event by Harrison’s side.

So far, there haven’t been any red flags following the wrenching process that ultimately resulted in the withdrawal of Mayor Pugh’s previous candidate, Fort Worth, Texas, Police Chief Joel Fitzgerald.

Harrison’s five-year contract – already approved by the mayor and the Board of Estimates – would pay the ex-New Orleans chief a year’s worth of salary ($275,000) if he is not confirmed by the Council.

The ramifications of that clause were not mentioned last night. Instead, there were lots of smiles and occasional hugs.

“We’re excited to have you here,” said northwest’s councilman, Isaac “Yitzy” Schleifer, during the opening remarks. “We need you here.”