A member of the extended Brew family, Dean Bartoli Smith, suffered a loss recently, the death of his mother from cancer at the age of 76. Another Brew-er, the writer Rafael Alvarez, offers a tribute that captures her spirit – and an earlier era in Baltimore.

When Dona Bartoli was a girl of six or seven back in the early 1940s, she was often sent from her Iris Avenue home in East Baltimore to stay with grandparents in the small town of Berwick, Pennsylvania.

There, the Ciampi family – the Italian immigrants Pietro and Philomena, her mother’s parents – ran the Wee Green, a rural tavern catering to farmers, truck drivers and laborers. For some reason, she called her maternal grandfather “Pop-Pop Rebel,” and Philomena – believed to have lived to be 106 – adopted the name “Elizabeth” in the New World.

At the former speakeasy, young Dona helped out running errands, so small that an abiding memory was the dirty work boots of the men bellied up to the bar. Often, she’d be told to “go out and play.”

“She had to make-up her own games,” said her son Dean Bartoli Smith, a poet living in Ithaca, N.Y. “Out the front of the bar was a long path lined with stones that went up into the hills where there were wild strawberries.”

“Mom told me she would skip over the stones until she made it to the top. If she tripped or missed one, she had to start over. If she made it all the way without falling, she could eat the strawberries.”

Such discipline served the strong-willed girl well in a long and productive life before her death in Italy on January 29, 2019. For the past five years, the Baltimore born-and-bred attorney lived in the 16th century Villa Torquato in the Tuscan mountain town of Montecatini Alto.

“Never to be deterred from her goals, that’s how I remember her,” said Steven Miles, an old family friend who met the Bartoli clan when they all were young. “She was such a tour-de-force. Her loss brought tears to my eyes.”

With her husband Larry Lowrimore, with whom she renovated the villa, Dona ran a bed-and-breakfast out of their storybook home surrounded by olive groves they harvested for table oil admired on both sides of the Atlantic.

The “Ciampi Room” of the villa is furnished with oak antiques the couple refinished when they lived in Maryland. Larry, who learned many of the Bartoli family recipes, was head chef.

“When dinner time for one of their parties was looming,” said Dean, “you could hear my mother call out sharply, ‘C’mon, Larry, the food isn’t going to cook itself.’”

Which just goes to show that you can reinvent yourself as a contessa on the other side of the world and good ole Bawlmer is still going to take over when the game is on the line.

“They were famous in Italy for their Thanksgiving dinners,” said Dean, often called “Dino” in the family circle in honor of Dona’s father. “It always included a pasta dish with the Bartoli family sauce and meatballs.”

You can reinvent yourself as a contessa on the other side of the world. Good ole Bawlmer is still going to take over when the game is on the line.

Ah, the sauce. My goodness, the meatballs.

“She would spend all day making the sauce like her mother did,” said Sean Hearn, a friend who became a third “Smith brother” while growing up playing ball and hanging out with Dean and his brother Brendan. “She’d start in the morning – simmer, taste, simmer, taste – and we’d eat in the early evening.”

At table or out in the world, if you were with Dona, it was “Vivere nell’abbondanza.”

Born in Baltimore’s old Franklin Square Hospital at Calhoun and Fayette Streets, Dona Carol was the first of three children born to Dino Bartoli, a night-shift yardmaster at Bethlehem Steel in Sparrows Point, and Carolyn Ciampi Bartoli, who ran a beauty parlor out of family homes in Orangeville and, after 1956, 3011 Oak Forest Drive in Parkville.

“Dean’s grandfather used to make us Italian subs so big that we couldn’t eat them,” remembered Hearn, who never missed a meal while in the company of the Bartoli clan,

Carolyn – who listened to Don Larsen’s “perfect game,” on radio in the ’56 World series while scrubbing the floor – died in 2006 in Bethlehem, PA. Dino, who also loved baseball and taught his grandsons to hit line drives, followed his beloved to the other side a year later in Fort Myers, Florida.

Dona graduated 8th grade from St. Elizabeth’s parochial school on East Baltimore Street above Patterson Park and went on to the Catholic High School of Baltimore on Edison Highway, graduating president of the Class of 1960.

Invariably the smartest person in the room – and, like her mother, always the best-dressed – Dona was a beauty. But her intellect and innate sense of right-and-wrong complimented her in ways that mere beauty could not. 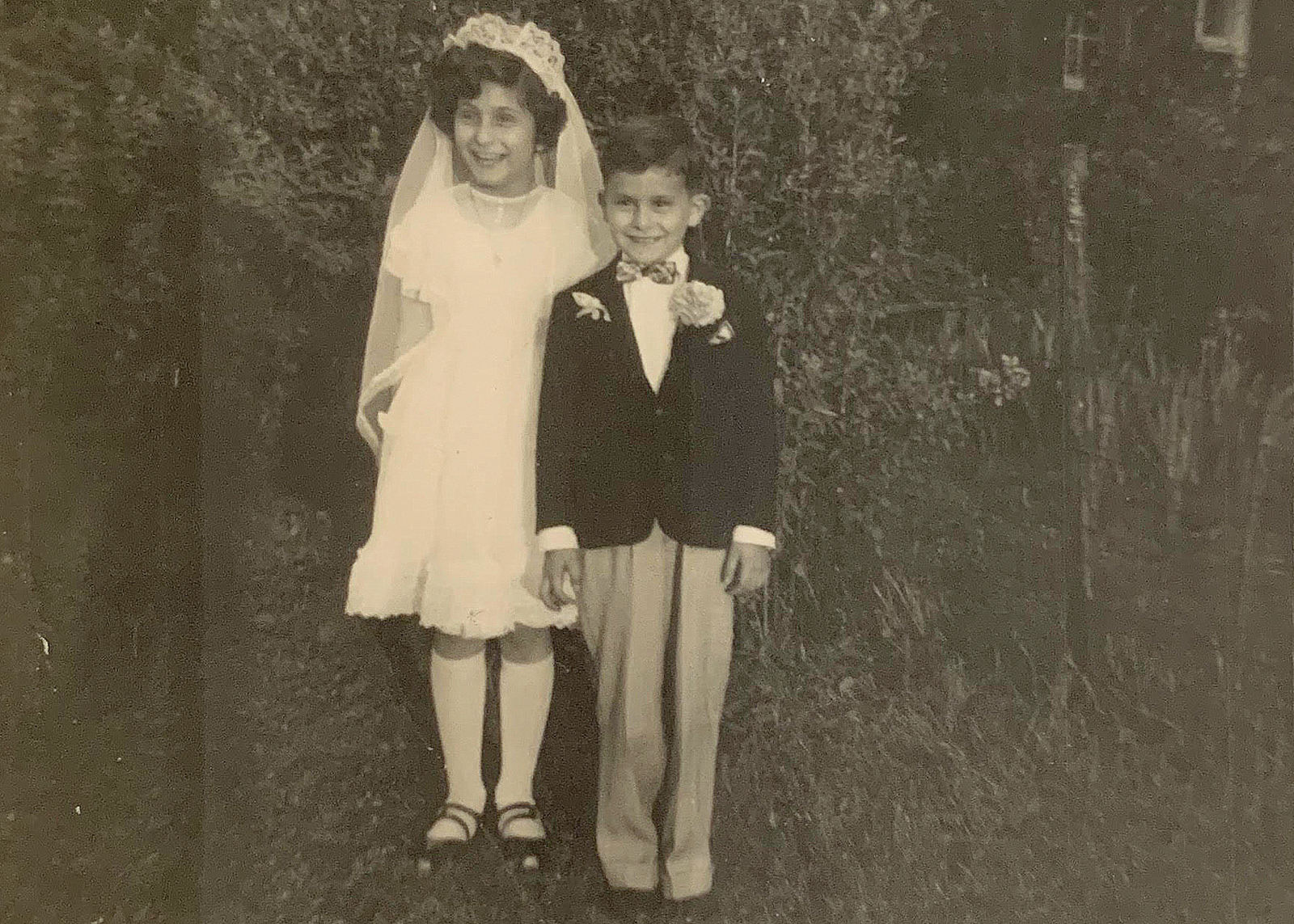 Dona Bartoli, on the day of her First Holy Communion, 1949, with her brother Bernie. (Family photo)

Jim “Snuffy” Smith – who met his future bride on the beach in Ocean City while they were high school kids – learned of Dona’s integrity on their first date, a day trip in his father’s car.

“I was probably 15, it was 1957,” said Smith, a former varsity basketball coach at the Bryn Mawr School.

“It was a light blue ‘56 Ford with a V8 and a stick shift, just a plain Ford with a hot engine,” said Smith. “We took a ride up to Rehoboth and back, just getting to know each other.”

Snuffy learned a lot that night, particularly Dona’s low tolerance for teenage knuckle-headed foolishness. On a moonlight walk along the boardwalk, Snuffy noticed a wooden “Beach Patrol” sign that had become loose. He said he was going to steal it and bring it back to Baltimore. A souvenir, perhaps, of what he hoped would be a magical evening.

Dona responded with an unequivocal frown – and perhaps a few chosen words – and the sign remained in place.

“She was never submissive to anyone, I don’t even think her parents wanted her to go as far as she did,” said Snuffy.

Ultimately, Dona was charmed by the handsome athlete and they began dating seriously through Snuffy’s junior year at the University of Baltimore, where he played varsity basketball.

On St. Patrick’s Day 1963, with Dona expecting their first child, the couple were married at St. Agnes Roman Catholic Church in Catonsville. A second son, Brendan, followed in 1966 – born on the day that Frank Robinson hit the only ball to ever sail completely out of Memorial Stadium.

“There was always a mutual respect and passion for Dean and I,” said Brendan of his parents. “Each challenged those they loved to be the best in their own way.”

“She never gave up on her dreams”

By the time the boys were in grade school, the marriage had collapsed and Dona set out to make it on her own, taking a handful of credits she’d earned after high school at the old Villa Julie junior college (now Stevenson University) and earning a degree in sociology Morgan State University.

“I was so impressed when she decided to become a lawyer,” said Noelle said her niece, Noelle Beck Taslitz. “She never gave up on her dreams.”

Her dreams did not come to pass without hard work and struggle. “Before my mom met Larry, my brother Brendan had very bad asthma and she fought and scratched and clawed to keep him alive, raise us, do her homework and work nights,” said Dean.

It was Noelle’s mother – Senie Bartoli – who set her big sister up that night in 1974, intuiting (a bullseye) that Larry would fall for Dona. They met at the old Tom Jones nightclub in Towson when Dona was a single-mother and full-time student working the coat check room.

“Senie knew their father would love Larry,” said Dean. “And he turned out to be . . . the ultimate reward for all of her hard work.”

“I was so impressed when she decided to become a lawyer.”

“My earliest memories of Aunt Dona are her and Larry teaching me the ABCs,” said Taslitz, who remembers her aunt taking her to lunch at the fabled Hutzler’s Tea Room on Howard Street in old downtown Baltimore.

“I would order a turkey club and get a clown sundae for dessert,” said Taslitz, who remembered Dona as “super stylish with a great figure. I always thought she looked like Cher.”

Dean remembered being an adolescent and listening, late at night, to Dona and Larry talk of the future. This was when the family lived on Countryside Lane in the Baltimore County town of Baldwin.

“My room backed up against this moonlit cornfield, so bright sometimes it was almost daytime,” he said. “I could hear them talking about what needed to be done to raise these two boys. I’d listen to their conversations and stare at the moon and fall asleep.”

They did right by those boys and worked long and hard – moving to Chicago in 1978 where Dona attended the John Marshall Law School. She passed the bar at age 48 and for more than 20 years ran a family law practice in Woodstock, Illinois.

It was a profound connection, in place for 45 years and based on mutual attraction, a respect for what the law can accomplish (Dona fiercely advocated for women and children) and a love of all things Italian, especially food.

Following that passion, in 2006, Dona and Larry took a great leap toward their own dreams by buying a 450-year-old farmhouse (stone walls, sans roof) in Montecatini Alto, between Lucca and Florence.

For the next decade, they put their souls and sweat into making the property a traveler’s paradise: inn, cooking school and a working olive grove.

The country home was named for Dona’s paternal grandfather who was born nearby. In 2015, they made Torquato their full-time residence. A blink of an eye later, she was gone. 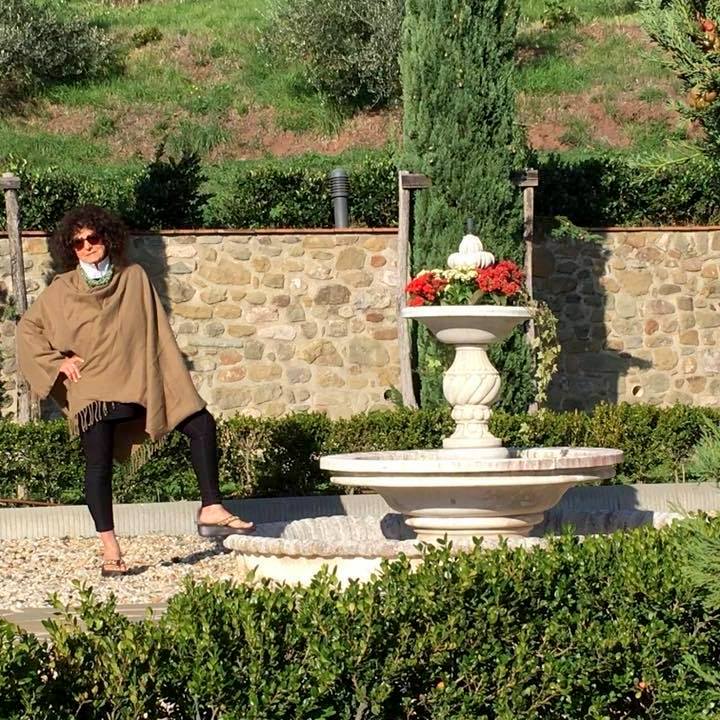 In an email to family and friends announcing his mother’s death, Dean called the last Tuesday of January this year, “the worst day of my life. Our incredible Dona passed away today at 5:20 pm at the hospital in Pescia, Italy.

“One month ago, she was in perfect health ,” he wrote. “She didn’t like hospitals or doctors [and] did not want to return to the hospital in Pescia after a grand exit two weeks ago in a nightgown, full-length mink coat, boots and Hepburn shades, waving goodbye to the staff as she departed prematurely with the IV still dangling from her arm.”

A small ceremony was held on February 2 at the Santa Ripa Church in the mountain town where she lived.

Though more than half of her life was spent elsewhere, Dona remained a Baltimore girl in her heart-of-hearts. She loved steamed crabs, Berger cookies, shrimp steamed with Old Bay, Maryland tomatoes — tomato salad a family delicacy — and pizza from Matthew’s in the heart of Highlandtown, just across the park from where she made her First Holy Communion.

Donations in memory of Dona Lowrimore can be made to the Breast Cancer Research Foundation.

RAFAEL ALVAREZ is a screenwriter based in Baltimore and Los Angeles. He can be reached via orlo.leini@gmail.com.