Councilman John Bullock confirmed yesterday that the Housing and Urban Affairs Committee he chairs will vote next week on whether to grant BGE the right to use a 2.2-mile-long pipeline across Leakin Park.

The measure is expected to pass the committee, then go before the full Council for ratification on April 29.

At issue is not the pipeline itself – the project is nearly complete – but the price the city will charge BGE under a 25-year franchise agreement.

The Brew has reported that the Department of Recreation and Parks originally valued the franchise agreement at $14 million.

But over the agency’s objections, the Pugh administration settled for one-tenth of that amount – $1.4 million.

BGE recently agreed to increase the franchise fee to $2 million.

That’s still just one-seventh of the amount originally proposed by Recreation and Parks.

”The new price is still ridiculously low,” says Jack Lattimore, one of three members of the Leakin Park group who filed the lawsuit in Baltimore Circuit Court last Thursday.

”The City Council is trying to rubber-stamp an illegal process”  – lawyer for Friends of Leakin Park.

The group’s lawyer, Michael R. McCann, said the Pugh-controlled Board of Estimates violated the city charter by granting BGE the right to build the pipeline before the City Council agreed to the franchise agreement.

“The Council is now trying to rubber-stamp an illegal process,“ he said.

The lawsuit asks the court to declare any ordinance passed by the Council null and void and direct the Board of Estimates to hire a qualified appraiser to determine the true value of the 22 acres of parkland removed for the pipeline’s right-of-way.

”That’s what should have been done in the first place,” said Lattimore.

He noted that the project has caused considerable damage to the park, including the clear-cutting of more than 700 mature-growth trees.

A potent undercurrent of the dispute is the role campaign contributions may have played in City Hall’s handling of the project.

The Brew  has traced more than $32,000 in campaign funds flowing from utility executives to Pugh’s finance committee.

BGE and its chief executive, Calvin G. Butler Jr., were notable backers of Pugh’s run for mayor in 2016.

The Brew has traced more than $32,000 in contributions flowing from executives at BGE and its parent companies, Constellation and Exelon, to Pugh’s campaign committee during and after the election.

This tranche of contributions represented the second largest block of donations to Pugh from a single organization.

It was exceeded only by donations from personnel at the University of Maryland Medical System (UMMS), where Pugh was on the board of directors.

In the months before and after the Board of Estimates awarded BGE the right to install the new pipeline, Pugh picked up $12,000 in contributions from utility executives.

And on January 9, 2019, amid talks between city lawyers and BGE over the franchise fee, Butler personally contributed $2,000 to the mayor’s finance committee, Maryland Elections Board records show.

According to BGE spokesperson Linda Foy, BGE has not purchased “Healthy Holly” children’s books from the mayor.

Nor has it made payments to Healthy Holly LLC, the vehicle in which Pugh received hundreds of thousands of dollars in payments from UMMS and others.

Foy said she could not speak for Exelon or Constellation.

The purchase was made through Ariel Investments, a Chicago-based company that Rogers founded and serves as CEO. 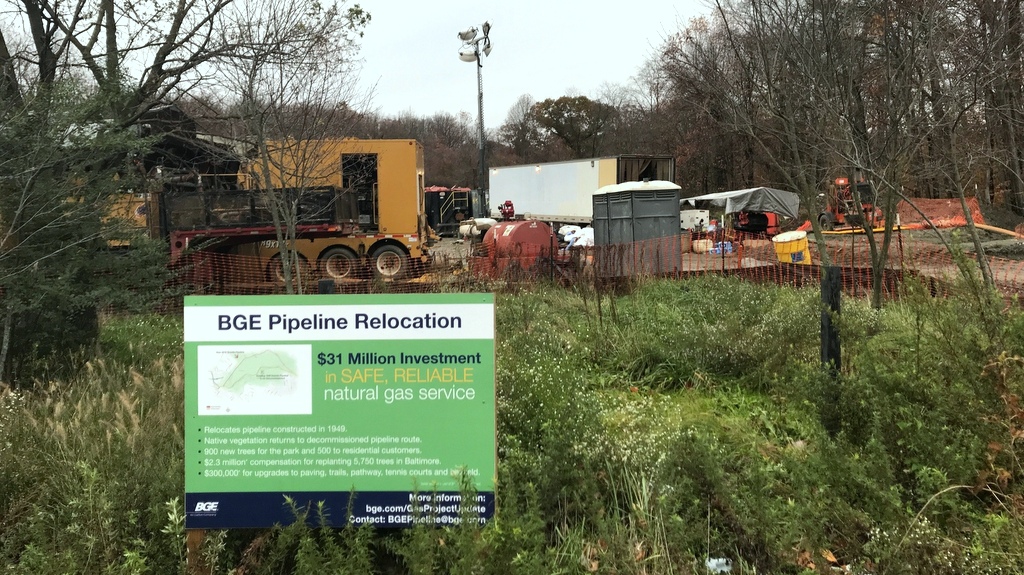 Environmentalists say Baltimore made a sweetheart deal with BGE to relocate its natural gas pipeline in Leakin Park. (Mark Reutter)

In 2013, the company sponsored a black corporate directors conference in California and invited Pugh, then a state senator from West Baltimore, as one of the speakers.

Ariel distributed the self-published paperback books to attendees of the conference.

The books were purchased through Associated Black Charities, a Baltimore non-profit that manages grant programs for the city, including the Children and Youth Fund and the Ryan White HIV/AIDS program.

– Fern Shen contributed to this story. To reach the reporter: reuttermark@yahoo.com.