“No, no, no. We’re not doing that,” announced Acting Mayor Bernard C. “Jack” Young during the Council’s pre-meeting luncheon, which caused Sharon Green Middleton, the acting Council president, to remove the bill from consideration.

At the same time, the franchise is scheduled for approval at tomorrow’s meeting of the Board of Estimates, a body now controlled by Young.

The difference between the two measures?

Whereas the Council called for BGE to pay a $2 million franchise fee for the new gas line across Leakin Park, according to a Council hearing last week, the Board of Estimates seeks just $1.4 million.

Kristerfer Burnett, the councilman with jurisdiction over Leakin Park, said BGE will eventually pay the $2 million figure via an amendment – but only after the BOE and City Council ratify the $1.4 million number.

“I needed clarification on this myself,” said Burnett, who acknowledged he was blindsided by Young’s instructions to the City Council.

The turn of events was the latest twist in the secretive process by which Mayor Catherine Pugh (now on leave of absence) and Acting Mayor Young (previously president of the City Council) authorized BGE to construct the natural gas pipeline.

Friends of Gwynns Falls/Leakin Park, a citizens’ environmental group, has filed a lawsuit in Circuit Court in Baltimore accusing Pugh, Young and the Board of Estimates of illegally granting BGE the right to 19 acres of parkland property for construction work in 2017.

The lawsuit further accuses the board of failing in its responsibility to obtain the best franchise price, as required by the city charter.

The group’s lawyer, Michael R. McCann, wrote to Young in January seeking his help to get the city to perform an independent appraisal of the land used by BGE.

No help was forthcoming, McCann said.

Friends has not received information they requested from the city and Pugh never responded to their letters of concern, Jack Lattimore, a leader of the group, said.

The Brew reported that the Department of Recreation and Parks sought $14 million from BGE for a 25-year franchise through the park.

But the city law department settled for one tenth of that amount – $1.4 million. 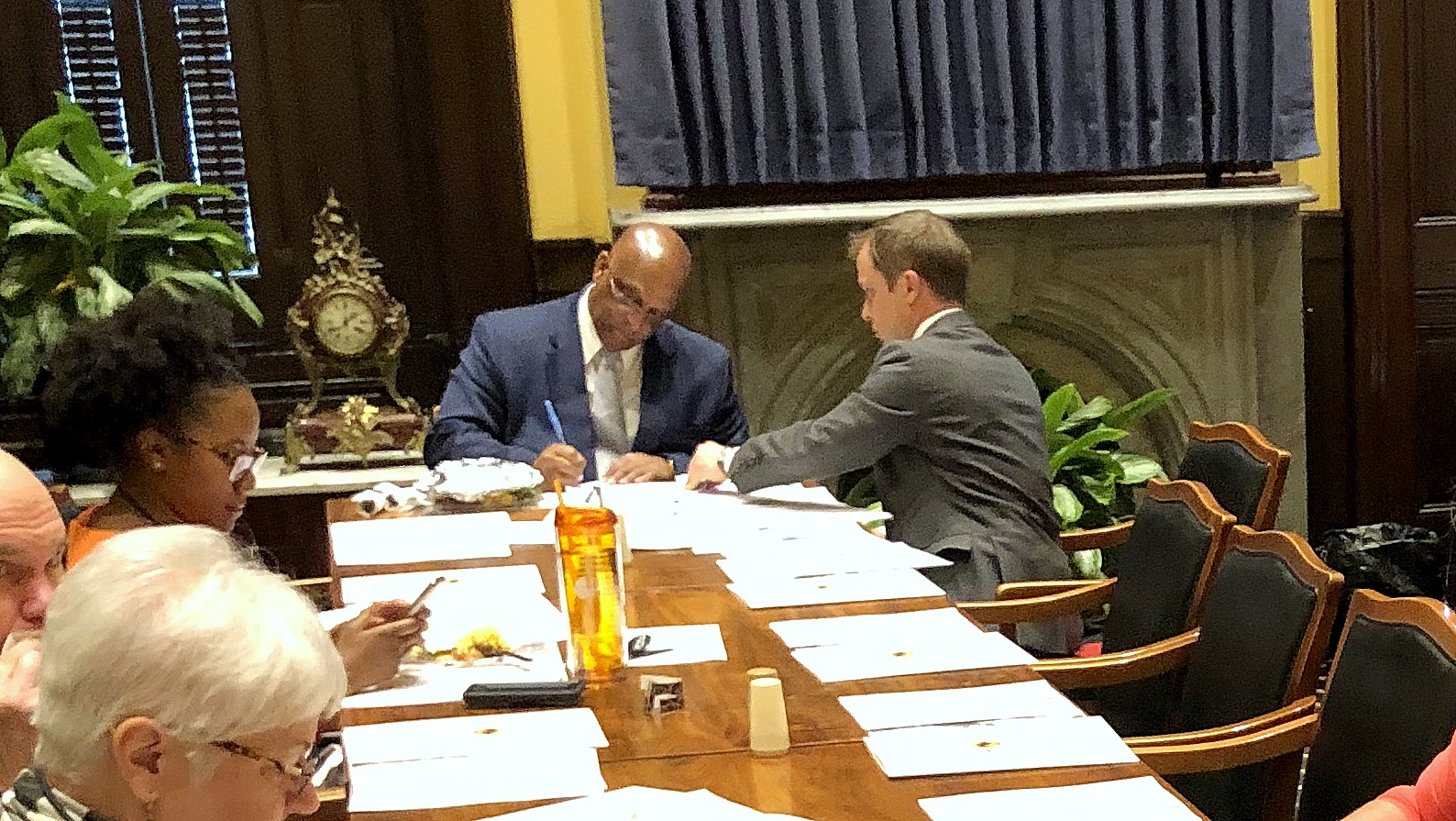 The Brew traced more than $32,000 in campaign contributions to Pugh from top executives at BGE and parent company Exelon.

In addition, John W. Rogers Jr., an Exelon director, paid $3,680 to buy 400 copies of Pugh’s “Healthy Holly” children’s book, which he distributed at a California leadership conference that featured Pugh as a speaker.

Young reported a $1,000 campaign contribution from BGE last November 15, two days after the first Council hearing on the franchise bill.

To appease critics of the franchise price, the law department and BGE recently came up with the $2 million figure.

Last Tuesday, Burnett cited the new figure – taking credit for “an increased payout, an agreement by BGE of $600,000” – when the Housing and Urban Affairs Committee approved the agreement and sent it to the full Council.

As is customary for the chief sponsor of a bill, Burnett was asked yesterday to outline the contents of Bill 18-0298 at the Council luncheon.

That’s when Young announced, “No, no, no,” and Middleton swiftly pivoted to other matters.

Burnett: “Is it on the Board of Estimates agenda? I don’t know about that.”

John Bullock, chair of the committee, later confirmed that the franchise bill was being pulled from the agenda.

Asked if the measure was also being pulled from the BOE, Burnett said, “yes,” but expressed surprise to hear it was still on the agenda. “For Wednesday?” he asked. “I don’t know about that.”

At this point, Michael Huber, a Young aide, interjected to say that the franchise approval would remain on the BOE agenda.

“The board is who officially sets the franchise,” Huber said. “That’s why it has to go to the board and then back to the Council.”

An aide to Young, when asked about the sequence of events: “I’m not talking to you.”

What figure – $2 million or $1.4 million – will come before the board, Huber was asked.

“The board sets the agenda,” he repeated. “You’ll have to read the agenda. I don’t know.”

”And,” turning to directly address the reporter, “I’m not talking to you. I’m talking to him [Burnett].”

By phone last night, Burnett told The Brew that the pipeline franchise was held because the law department told the Council that proper procedure was not being followed.

(The same law department had approved the submission of the bill to the Council before it came under fire by the Friends group.)

The bill would go to the full Council at the $1.4 million level in the near future. After it is approved, he said, the fee will be increased to $2 million by the Board of Estimates.

Asked why it was being done in this way, Burnett said “for consistency” with the 2017 agreement with BGE approved by Pugh, Young and the rest of the BOE.

Elaborating on what Burnett told The Brew, Young’s spokesman Lester Davis said the city charter prescribes the unusual sequence in order for a franchise to be granted, starting with introduction on 1st Reader, followed by referral to committee for a public hearing.

“Following the hearing, the bill is to be sent to the Board of Estimates, which determines the franchise fee and will send it back to the council where it will then be considered on 2nd Reader.” Davis said.

The bill was taken off the Monday night agenda, Davis said, after “somebody at the Law Department noticed that it inadvertently listed Bill 18-0298 on 2nd Reader.”

Among other things, the agreement allowed the utility to cut down nearly 800 parkland trees – 11,345 inches of “accountable tree loss” to be exact – to build the pipeline.

Many of the trees were old-growth trees in what is described by environmentalists as the third largest urban wilderness park in the U.S.

Because BGE wants to inspect the pipeline from the air, the Pugh administration agreed to a 50-foot-wide right-of-way, permanently devoid of trees or brush, to run across 2.2 miles of the park.

BGE has agreed to pay for restoration of a playing field, nature trails and equipment destroyed during construction.