How to make sure that new construction in Baltimore’s historic districts doesn’t weaken the character of the district or dwarf existing buildings.

Especially when more and more urban projects attempt to incorporate large new buildings into older and smaller ones on the same site.

Those were the central issues presented before the Commission for Historical and Architectural Preservation (CHAP) yesterday by projects proposed in Mount Vernon and the Howard Street Commercial Historic District.

• “400 Park Avenue,” the tentative name for the project that includes the old Martick’s Restaurant Francais at 214 West Mulberry Street, would get a six-story, 94 unit apartment building.

“I think this building is way too tall and way too massive,” said Larry Gibson, who argued that the the block’s “natural stepping-up” relationship to the nearby Belvedere Hotel to the north would be “completely eliminated by the new building.”

Matthew Mosca also warned against erecting such an eight-story structure there, predicting that other developers will try to do the same if this one moves ahead.

“It sets a precedent that will be very difficult to overcome,” he warned. “I am not happy about it.”

“It is a significant. . . precedent” in terms of height, agreed the panel’s chair, Tom Liebel. 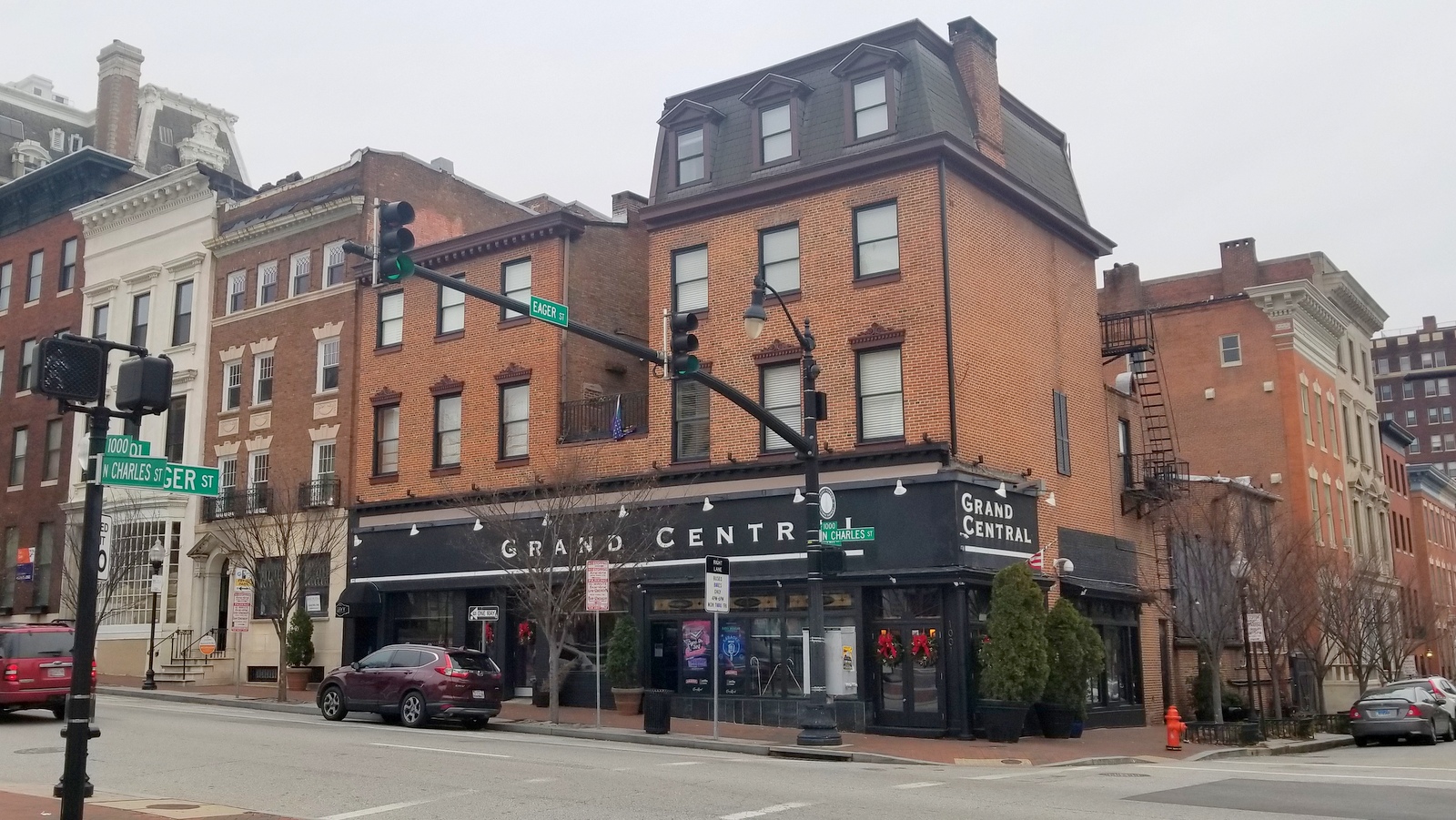 Grand Central, once one of Baltimore’s largest gay nightclubs, was sold earlier this year to a developer. (Ed Gunts)

Similar objections arose when the panel turned to the Park Avenue project where a 75-foot-high apartment building would tower over the the preCivil War Martick’s building.

Questions were also raised about how the apartment structure would fit in with the neighborhood, which includes remnants of Baltimore’s old Chinatown.

In both cases, though, CHAP ultimately gave the projects concept approval with conditions, an action that authorizes the developers to move ahead with their planning.

The votes for approval were 6 to 1 for City House Charles and 7 to 0 for the Park Avenue project.

For City House Charles, a group called Landmark Partners has proposed to retain the fronts of 1001 and 1003 North Charles Street and build an eight-story office building behind them, with access from Eager Street.

Landmark’s architect, SM+P, proposed a series of changes to the structures that would be retained: painting brick walls that aren’t currently painted, adding a floor of office space above 1003 North Charles, and adding six windows to the south wall of 1001 N. Charles.

Commissioners Mosca and Gibson both spoke against painting the brick.

CHAP staff planner Caitlin Audette told the panel that the panel’s design guidelines don’t permit painting unpainted masonry unless there is a compelling reason for doing so or adding new windows on street-facing facades.

She also said the staff questioned replacing the shingles on the mansard roof at 1001 North Charles with a metal surface as well as the design of a low-rise portion of an addition because it would look like a townhouse, even though it is not intended for residential use.

SM+P architect Charles Patterson said he proposed painting the older buildings as a way to unify the historic and new structures and hide imperfections in the brick.

“We’d like to create a cohesive design in the end and make sure this really sings on the corner,” he said. As for the six windows on the side of 1001 North Charles, he said, the idea was to bring more light and air to the offices inside.

Audette said the scale and massing of the proposed addition meet the city’s guidelines, and its proposed height of 90 to 100 feet puts it under the city’s height limit of 120 feet. As a result, she said, the staff felt comfortable recommending concept approval with conditions.

The design received positive comments from several panel members and speakers in the audience.

“I think the height and massing is really thoughtfully done. The setbacks and balconies add vibrancy,” said panel member Laura Penza. “I think the windows actually enhance the corner.”

“Even though the addition is relatively tall,” he said, “it does not overwhelm the historic buildings” or appear to “loom over” them.

For the apartment project, a group called Park Avenue Partners showed plans that indicate it is still working to retain the front third of the Martick’s building.

The skin of the apartment building would be a combination of white and light gray brick, fiber-cement panels, architectural concrete and wood slats. As with the Grand Central building, Quinn Evans recommended painting Martick’s the same color as the apartment structure to unify old and new. 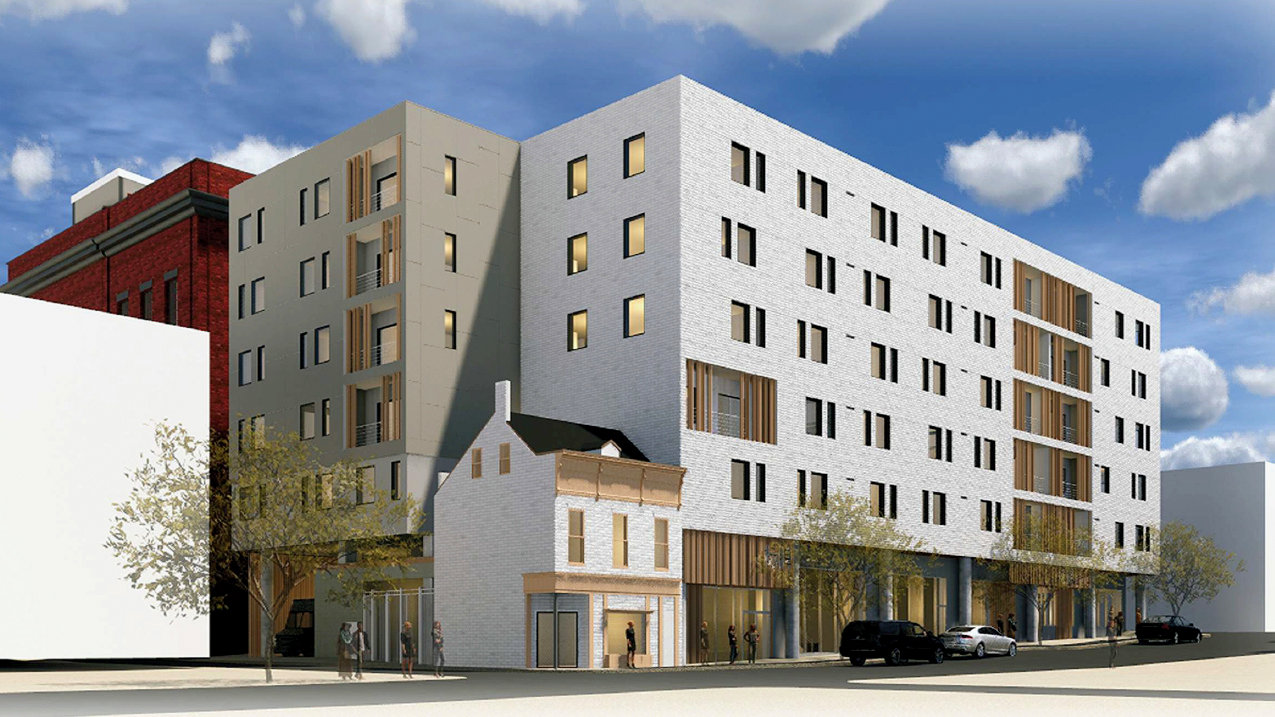 In their comments, CHAP panelists and audience members focused on the way the six-story building interfaced with the smaller Martick’s structure.

Hopkins, from Baltimore Heritage, said his group supports the project, but believes there is “room for improvement” in the way the new building meets the former restaurant.

He said the new building seems “austere,” while Martick’s comes across as “textured.” The apartment portion “looks like a modern building disconnected from its historic setting.”

Shen said members of his group have voiced concerns that the new building “encroaches too close to Martick’s.”

There are also concerns, he said, that the design of the new building is “too trendy” and that the “window-to-wall ratio is low.” One community member, he said, felt that the design treats Martick’s as an inconvenience rather than an asset.

The details “need more time in the oven,” Shen told the panel, “but overall we support the project and the developer.”

Gibson questioned whether more could be done to help the new structure fit in architecturally with the larger Chinatown area to the immediate south.

Chris Janian, of Vitruvius Development and Park Avenue Partners, said his group is working with the Chinatown Collective of Baltimore, the group that mounted a successful Night Market event in the area several months ago, on ways to add programming and design features that help the project fit in with Chinatown.
________________________________
RESTORING BALTIMORE’S CHINATOWN:

He said he is exploring the idea of creating a mural on the Park Avenue side of the apartment building to reflect the spirit of Baltimore’s Chinatown.

A mural is a better way to tie the new construction in with Chinatown than trying to add potentially cliched architectural features, Janian said, adding, “We’re working with Chinatown Collective to select specific artists.”

He said he wants the architecture of the new building to have a clean, pared-down Asian aesthetic.

But primarily, “it’s about programming rather than the architecture.” 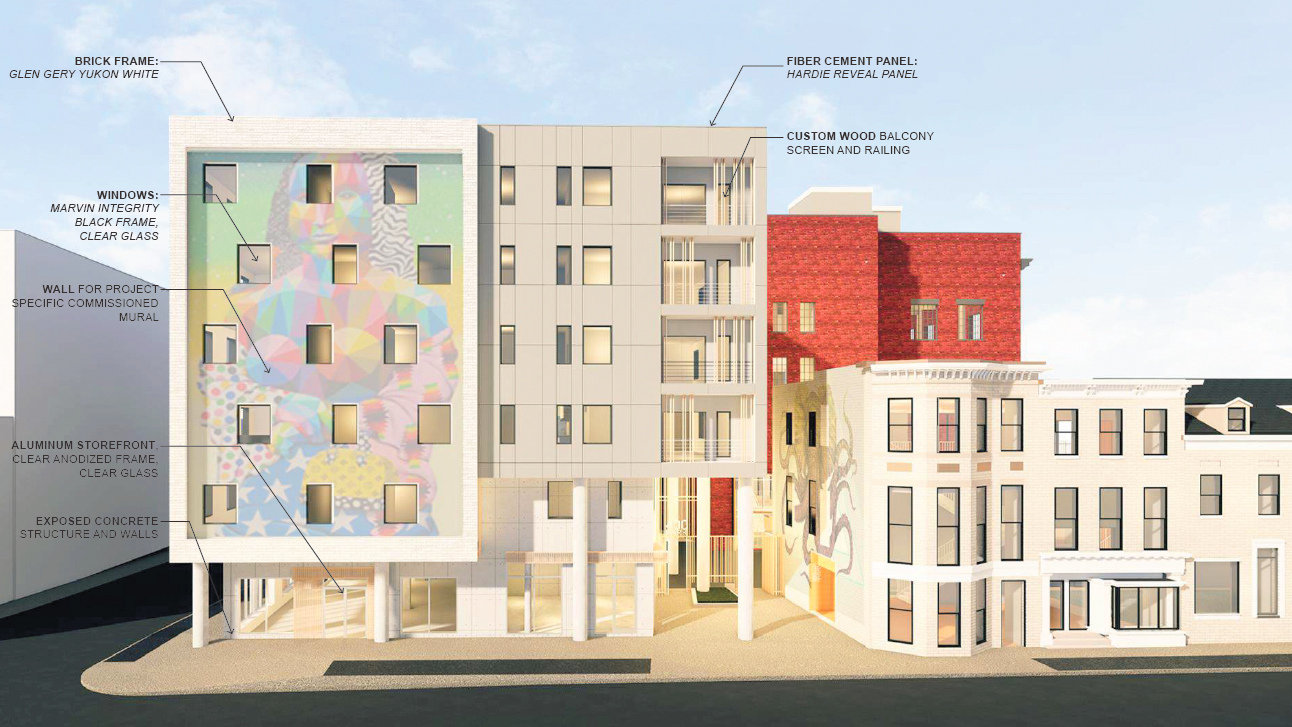 As for suggestions about incorporating features that might give the project more of a traditional Chinatown look, Janian said his goal “wasn’t to create something that wasn’t authentic.”

“It was more to create something new that was inclusive,” he said. “We don’t want to make it a Disney experience.”