Relieving oneself. It’s a euphemism implying that bathrooms are a site of relief. But for trans and gender nonconforming individuals, bathrooms can be quite the opposite – stressful and potentially dangerous.

A widely shared image has a person standing at the crossroads of two public bathrooms with one labeled “Get Yelled At” and the other “Get Beat Up.”

This image is meant to illustrate the fact that for non-binary individuals like myself, choosing a gendered bathroom can often represent a choice between verbal abuse or physical violence.

This is a reality for more than one-third of LGBT community who have reported being harassed when attempting to use public restrooms. The severity of the problem increases for trans individuals – with more than half reporting they avoided using a public restroom to avoid the risk of harassment.

Imagine how the danger multiplies in a law enforcement setting like a police van or jail cell. 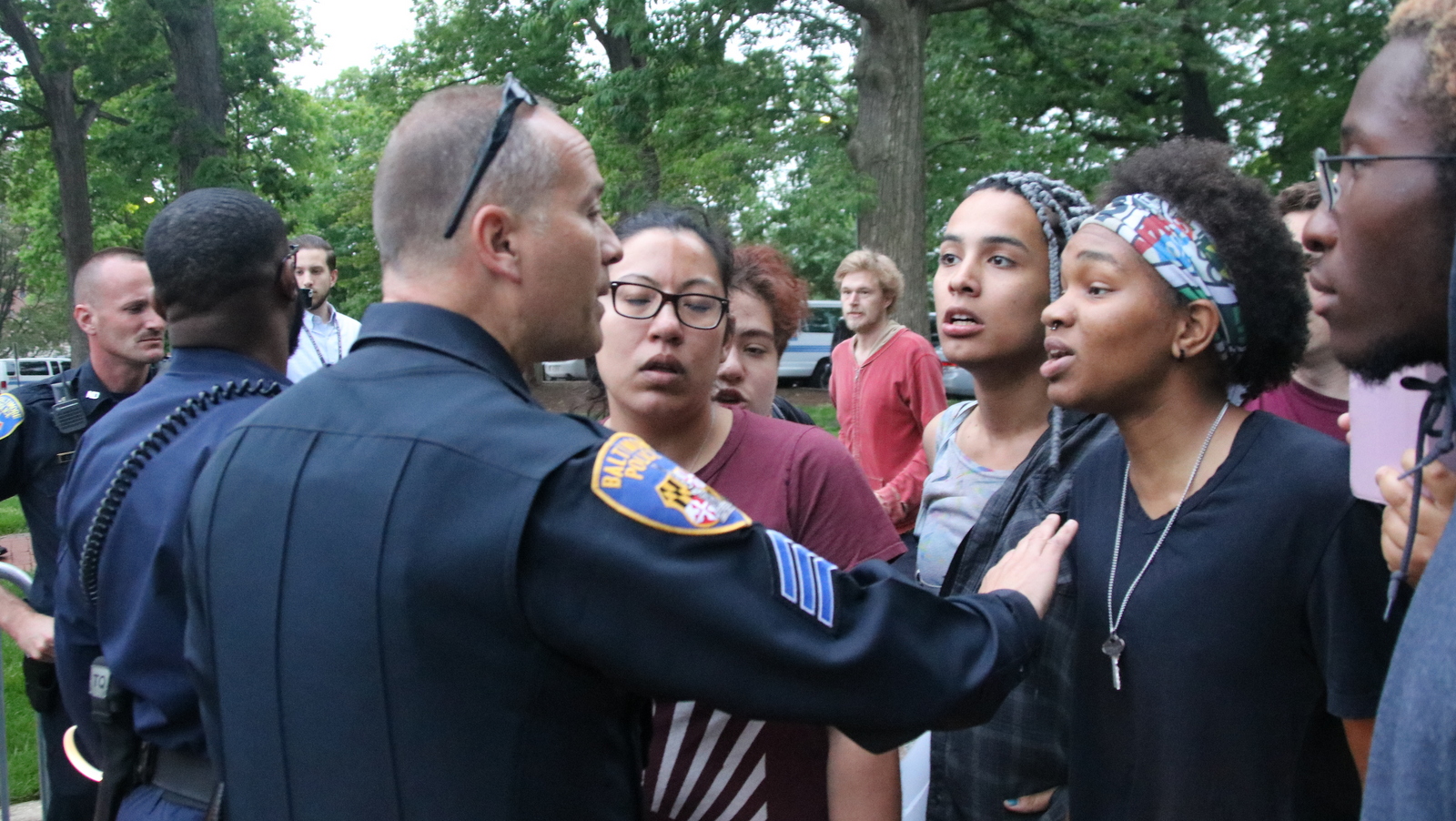 At the Johns Hopkins University protest last month, police insist on transporting a trans woman to Central Booking in a van with men, dismissing the bystanders explaining that they were misgendering her. (Fern Shen)

That’s the reason I was terrified to see my friend arrested by Baltimore police officers for her participation in the occupation at Garland Hall last month.

The protests were against Johns Hopkins University’s attempts to institute its own private, armed police force, something we see as a backward step in police accountability.

Trans community advocates have worked so hard to educate law enforcement about appropriate treatment of people in accordance with their gender identity.

Despite our best attempts, the department’s new “inclusive” policies were quickly cast aside, and officers doubled down on their old discriminatory practices when speaking to members of the public.

“Your friend is a man!” insisted an officer, refusing to correct the misgendering and insisting on transporting this individual in the men’s police van.

A bill before the Baltimore City Council could alleviate some of the anxiety that we experience when using the restroom.

In partnership with the LGBTQ Commission, Councilman Zeke Cohen has introduced legislation that would make all single-stall restrooms across Baltimore gender inclusive.

The bill would not change gender segregated multi-stall spaces, but it would outline protections and signage for single occupancy bathrooms. These private and public spaces are just like the bathrooms in your house.

Similar changes have already been implemented in Philadelphia, Denver, Washington D.C., the states of Vermont and California and many other parts of the country.
______________________
Bill 19-0385, Gender-Inclusive Single-Stall Restroom, was passed unanimously by the City Council on second reader and is scheduled for final passage before the Council next Monday (June 10).
_______________________
Requiring inclusive signage is an important first step in allowing trans and gender non-conforming people to exist in public space.

Measures like this at the local level are even more needed as the Trump administration moves the country backwards on the issue of protections for transgender people.

I understand why this kind of protection is needed. At a spa, while trying to relax, I was told that I couldn’t access the women’s space, but simultaneously was harassed and asked to leave the men’s space.

In other words, there was no place that my body was appropriate.

This experience of gatekeeping also mirrors the experience of my friend who was arrested over the issue of who has access to public space.

As a black trans woman, I feel this issue has a direct connection to my black and trans ancestors, who were historically denied access to segregated restrooms and other public accommodations.

Unfortunately, trans people have at times been strategically left out of the struggle for equality despite facing even more staggering odds. Like those who came before us, trans and gender nonconforming people only seek the ability to relieve ourselves without fear of violence.

These spaces are critical to not just LGBTQ individuals, but nursing mothers and wheelchair users as well. The proposed Council legislation would make restrooms readily available to everyone. All people deserve to have privacy and peace of mind when using a public bathroom.

At a recent hearing, I joined with a powerful coalition of trans and gender non conforming advocates and allies to support bill 19-0385.

We packed City Hall with people whose voices are not often heard in the halls of power. All this to say that this legislation is an important start to a larger conversation about equality for all people.

Let trans folks relieve ourselves in peace. If folks must obsess about public facilities, let’s stick to concerns that we all share, such as whether or not the bathrooms are clean and whether people remember to wash their hands.
________________________
Jamie Grace Alexander is community director of the Baltimore Transgender Alliance.