Officer Evan Anderson defies just about every stereotype commonly applied to Baltimore police except for his physical size: he’s a big-shouldered man with a commanding presence.

Yesterday he and a handful of fellow BPD officers pulled off something that hasn’t happened since the 2015 unrest following Freddie Gray’s in-custody death – a celebratory march through the heart of West Baltimore.

The Historic Pennsylvania Avenue Parade was replete with brightly dressed young people in marching bands, gleaming pairs of Corvettes and a tribute to horse-drawn arabbers, the original Grubhub for under-served neighborhoods.

“This is how we send out a positive message to the community,” said Marvin L. “Doc” Cheatham. The former president of the Baltimore branch of the NAACP dressed for the occasion in one of his trademark eye-catching ensembles – a turquoise seersucker suit, moss-green tie and white straw hat.

“Great to see so many people enjoying the day,” he said.

“This needed to be done”

The parade was the brainchild of Anderson and several other officers, including Charles “Chuck” Lee and Iris Martin.

“This needed to be done,” Anderson said, between breaks directing people to their parade positions.

“Right now, the police and the people are, well, against each other. That’s a problem. And all that’s being shown in the media is negativity.”

Just last week, for example, a BPD sergeant was charged with assault, false imprisonment and misconduct after Commissioner Michael Harrison said he wrongfully chased after a man who had criticized his arrest tactics. 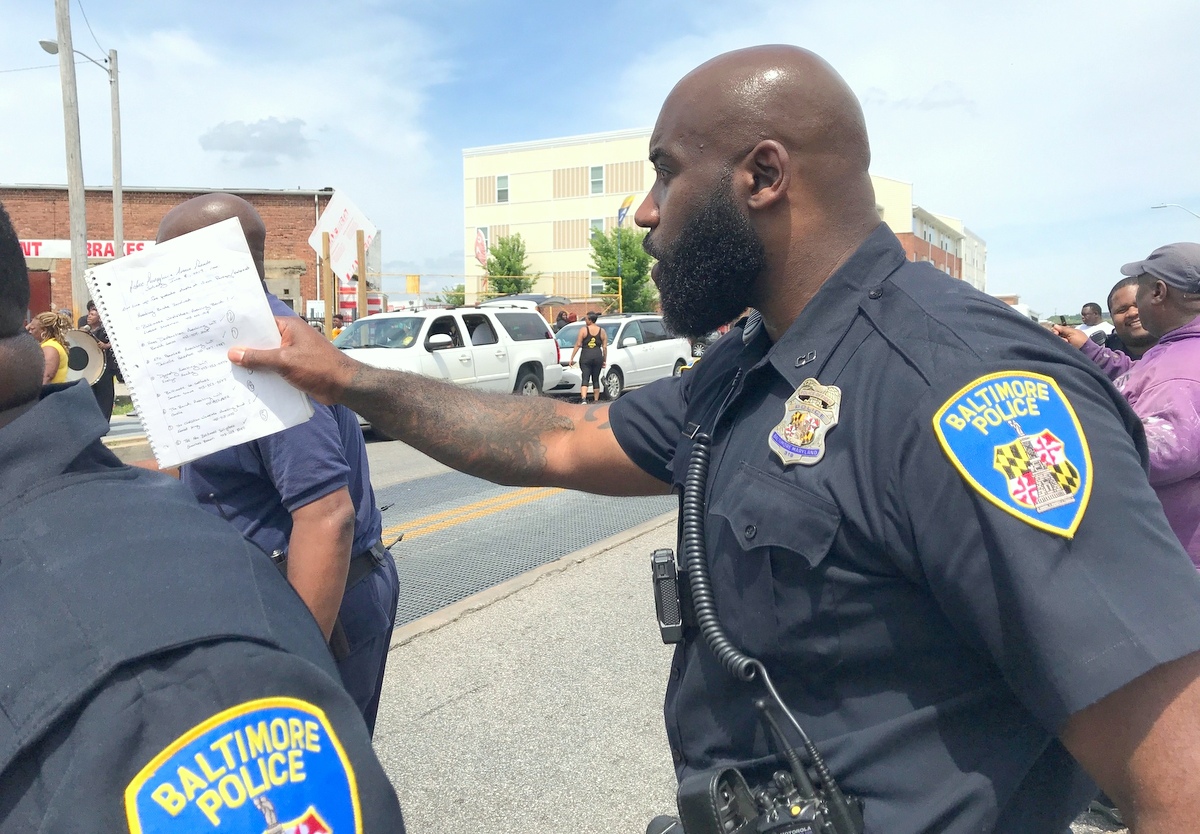 Evan Anderson coordinates the lineup of bands before the start of the parade. (Mark Reutter)

A Baltimore native who grew up in Pen Lucy and became a policeman in 2002, Anderson says he works hard to bridge the mistrust between officers and civilians.

“Being police doesn’t mean just locking people up,” he said. “You got to enforce the law, but you also got to find out what [people] need. Not everybody grew up with rules and values and were taught respect. You got to teach it to some people, talking to them and explaining what it is. You have to learn to have patience.”

He said the best place he has found to do his work is Penn North. “I genuinely care about the community, and the community embraces me.”

Currently posted at Pennsylvania and Laurens Street, he’s been a mainstay up and down the corridor. 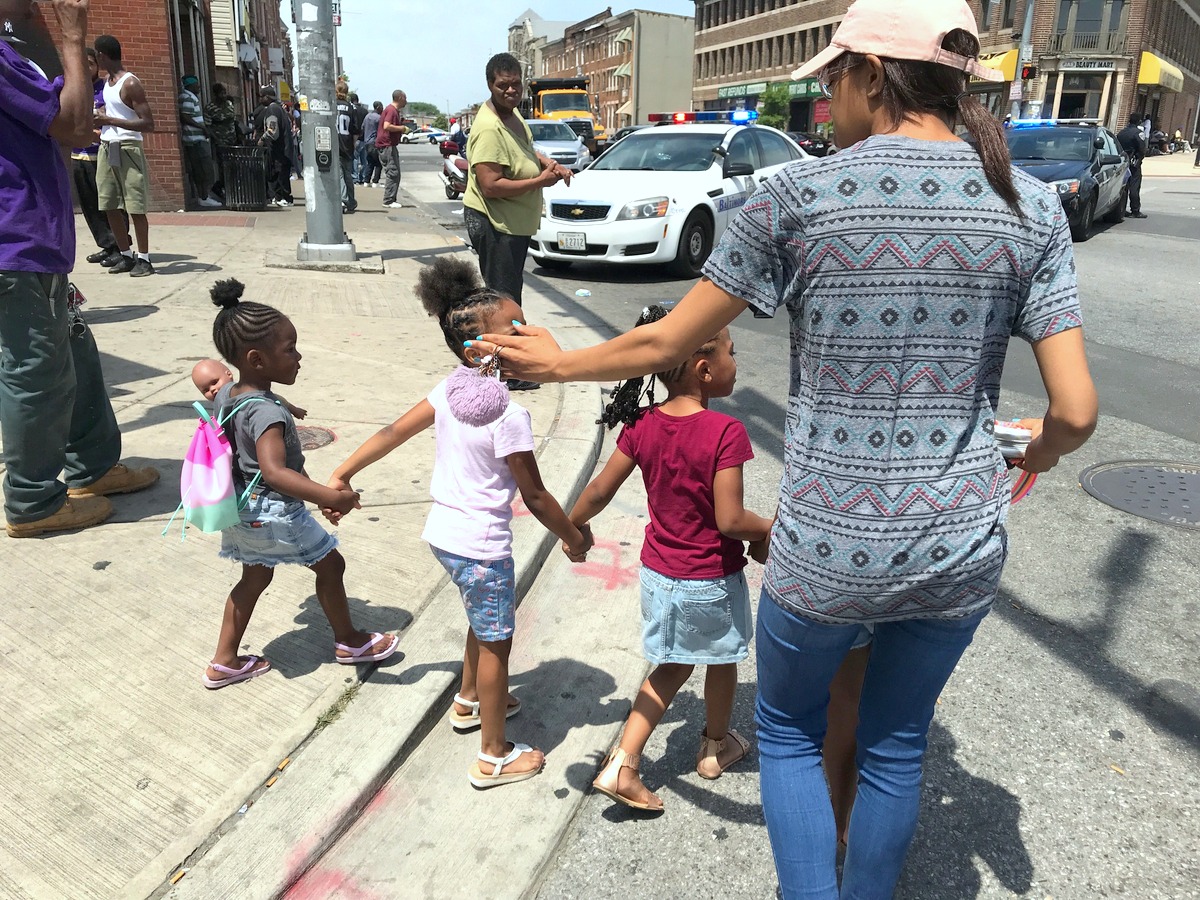 Young and old watch and cheer the first wave of marchers at Penn-North. (Both: Mark Reutter) 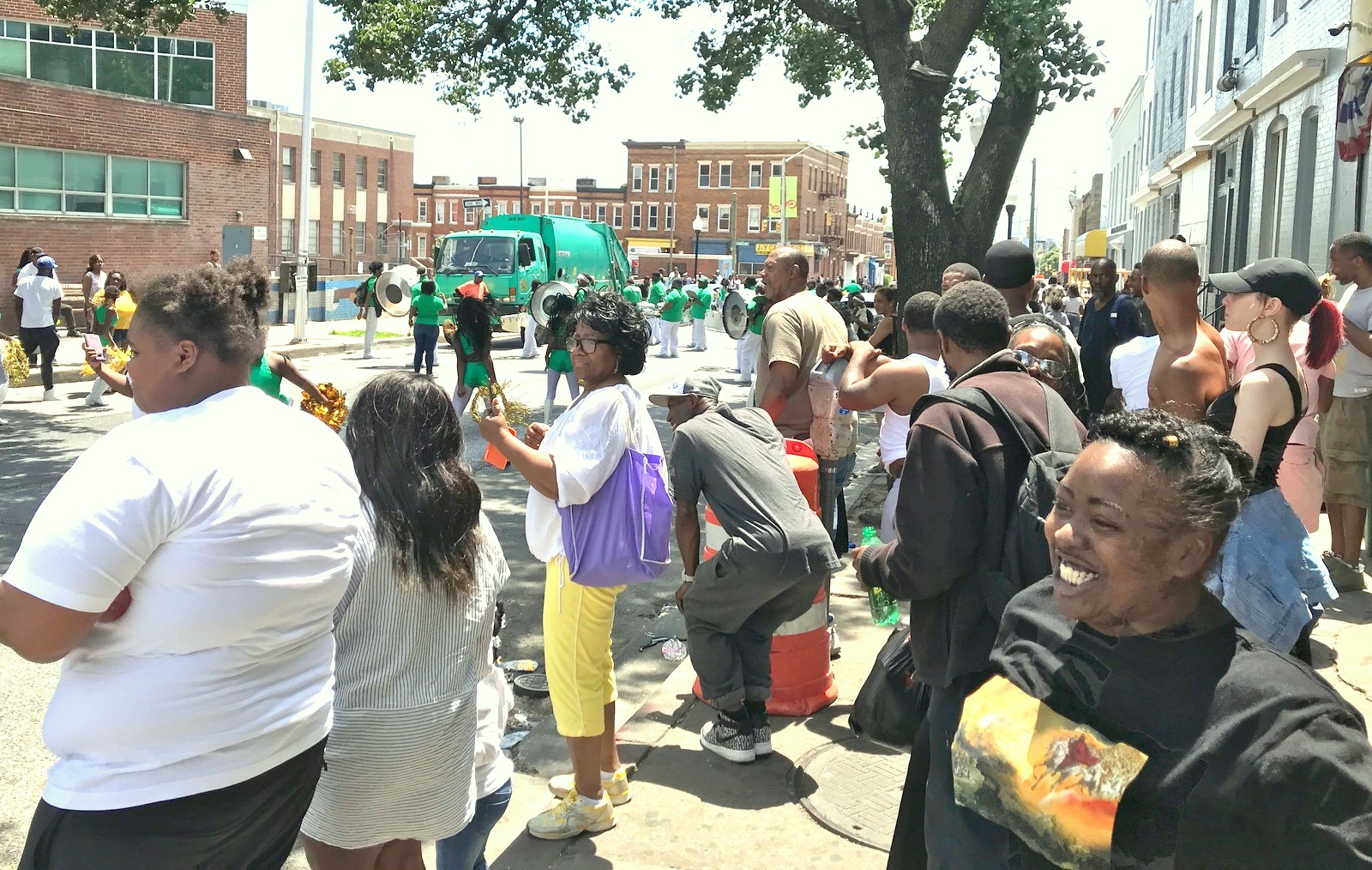 Up from the Ashes

Four years ago in the wake of the unrest after Gray’s death, Anderson helped organize a block party on Laurens Street.

Last year, he and Officer Lee helped stage a small parade near The Avenue Market.

This year his ambition was larger, reviving a parade that hadn’t taken place in West Baltimore since 2010.

“For this, we wanted all the marching bands we could get – and all the Corvettes,” he laughs. 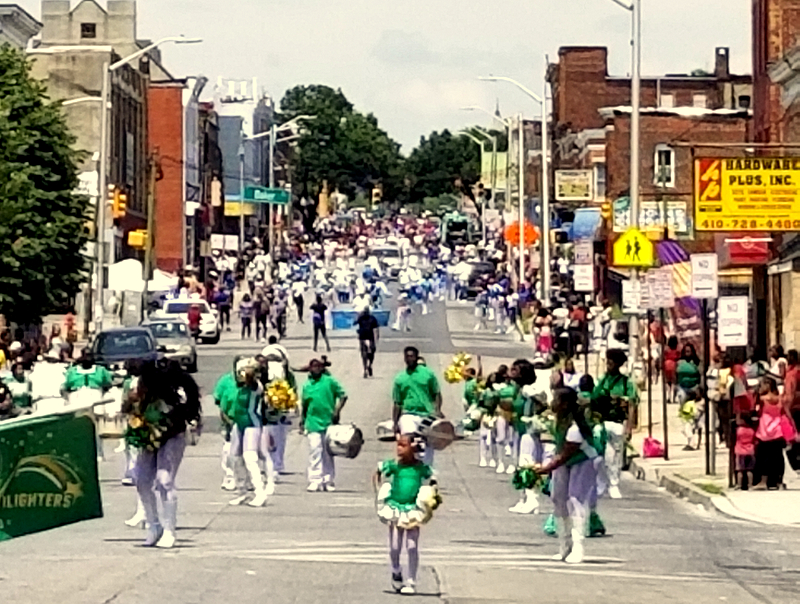 A sea of marchers and spectators viewed from Gold Street and Pennsylvania Avenue. (Doni Glover)

They wound up with a flotilla of classic cars driven by members of the Baltimore County Corvette Club, plus 12 bands who drummed and danced their way past hundreds of surprised spectators at Penn North.

They then made their way down the gently sloping, arrow-straight roadway lined with authentic Baltimore history.

“Beautiful weather. Lots of people. No problems whatsoever,” reported Doni Glover, a volunteer who live-streamed the event on his Bmorenews site.

“It came out well,” agreed a weary-but-upbeat Officer Anderson. “It’s been a positive day for this city.” 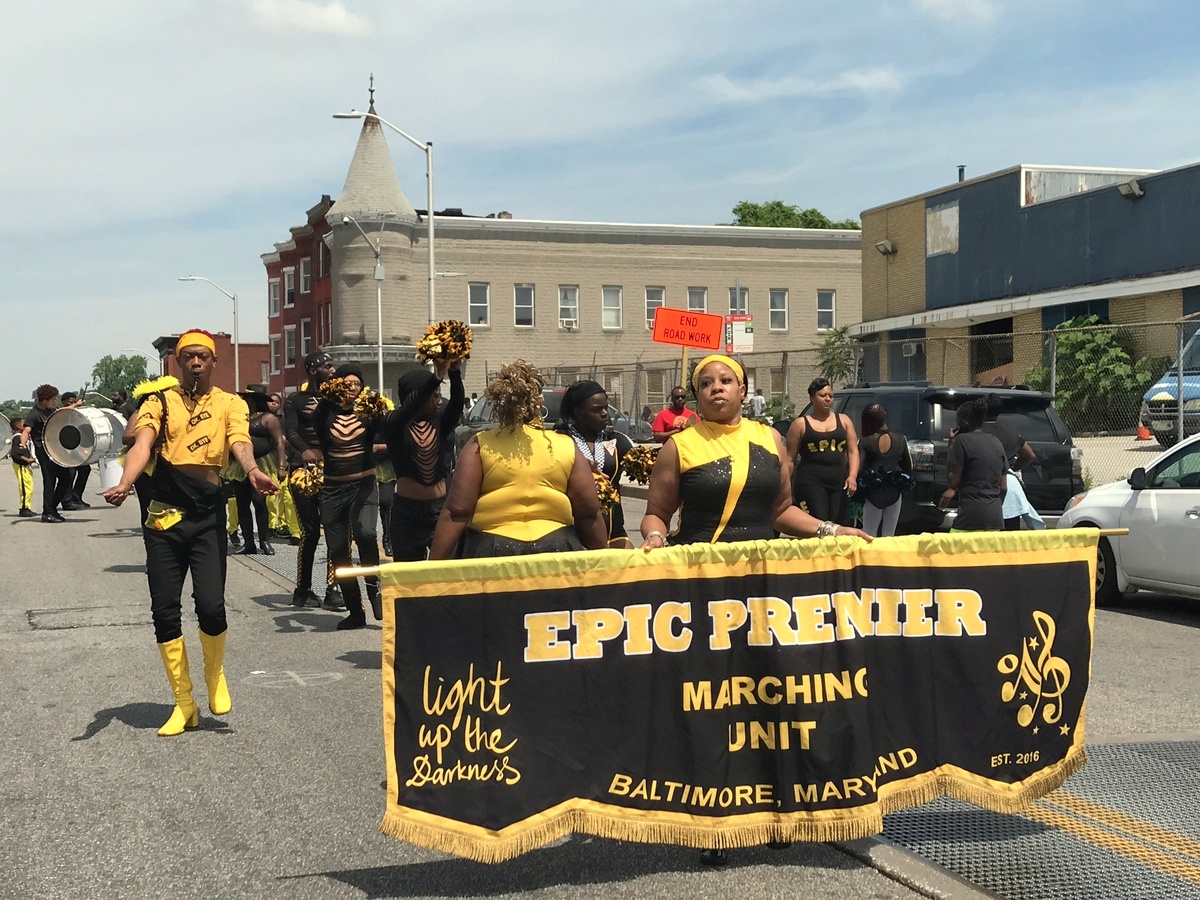 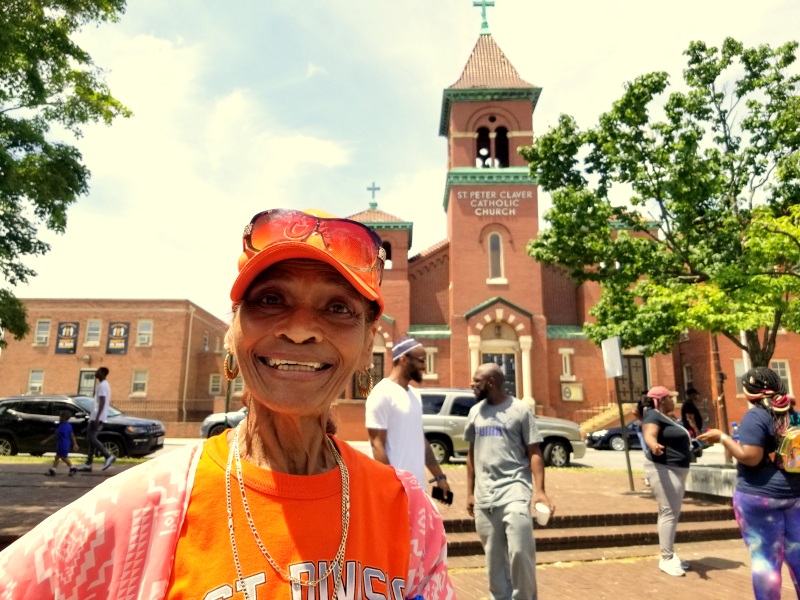 Natalie Mercer watches the parade next to St. Peter Claver Catholic Church, named after the 16th century Spanish priest who is considered the patron saint of slaves. (Doni Glover) 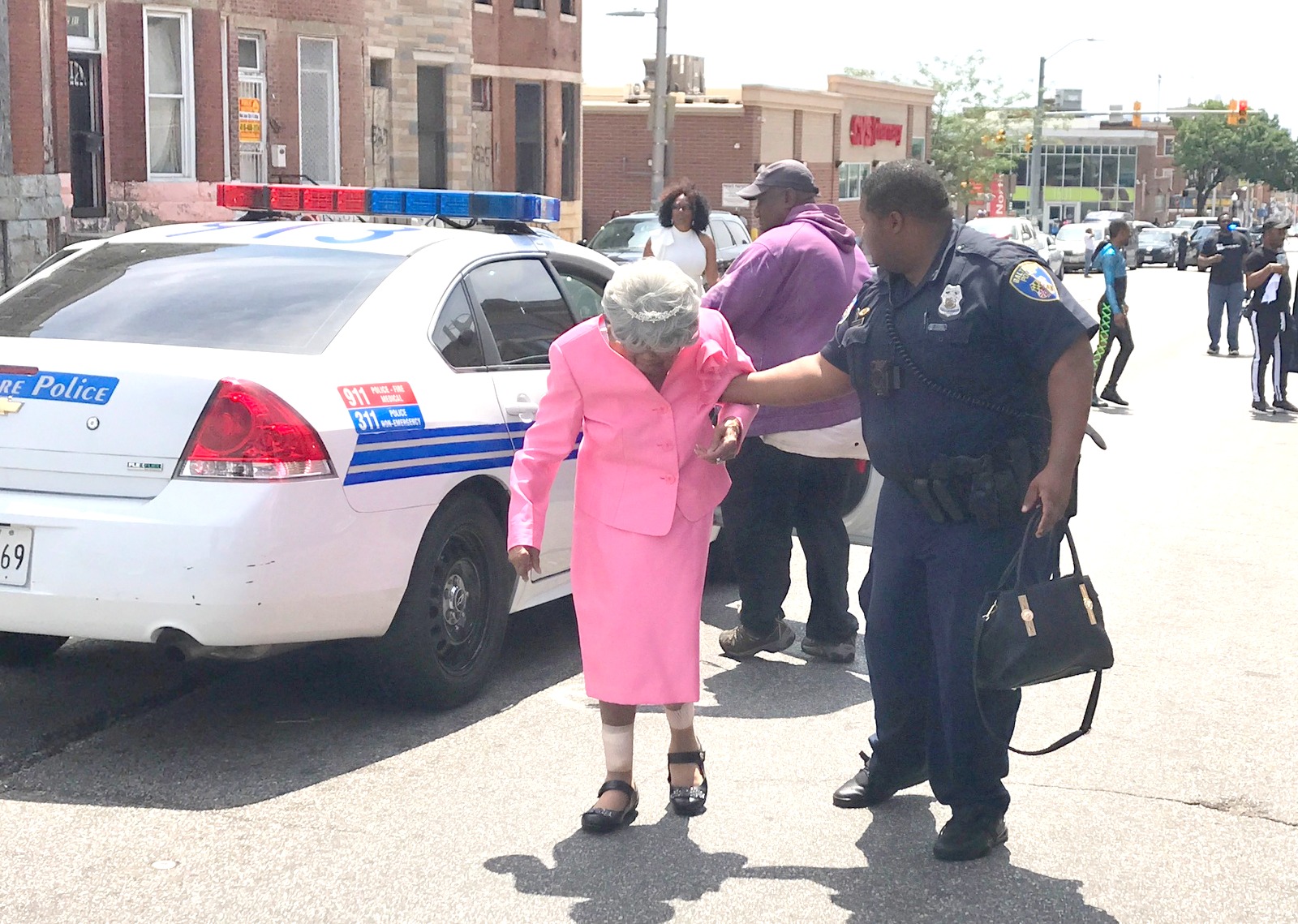 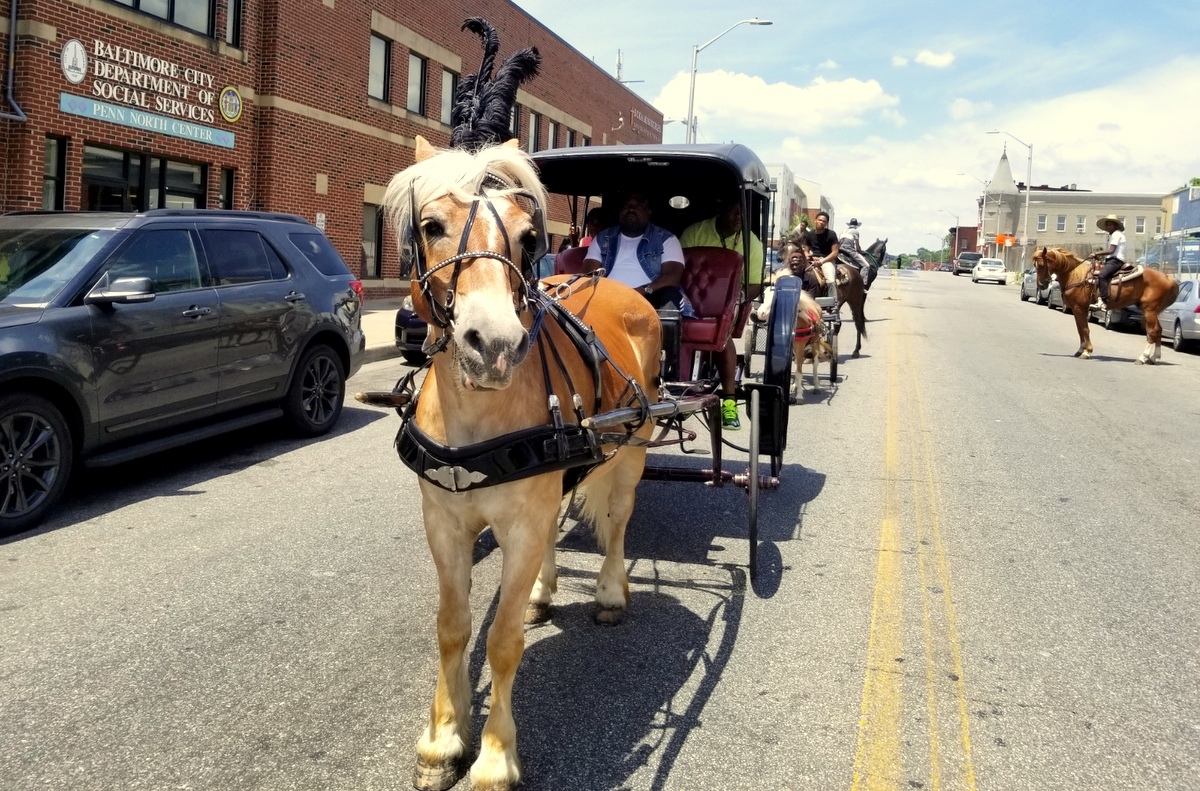 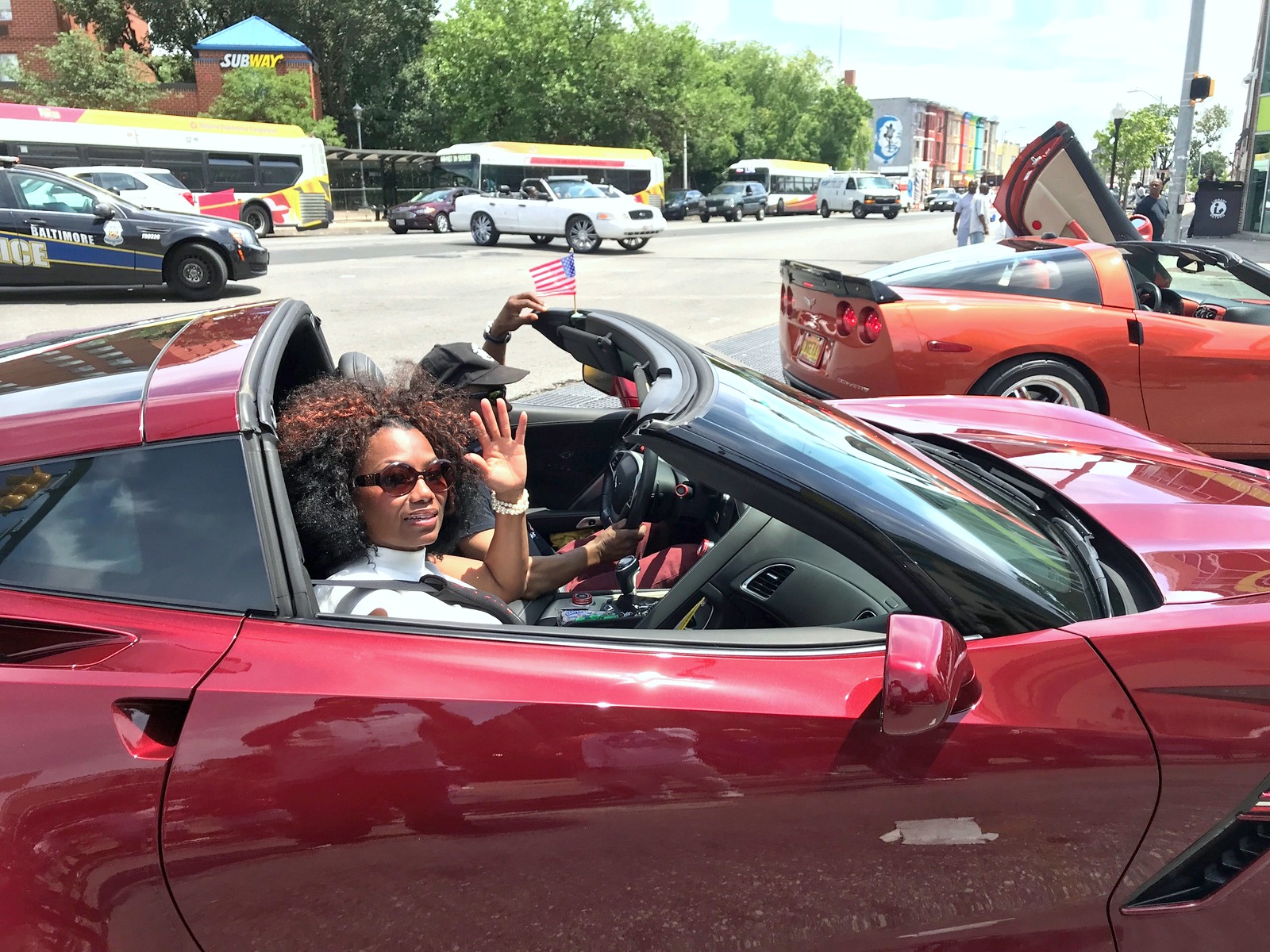