What to do with kitchen scraps if you hate to waste food, but don’t have “a compost pile out back” where you could put them?

“Up to now, I’ve just been throwing it out,” said Annelise Iverson at last Sunday’s Farmers’ Market under the Jones Falls Expressway.

Iverson recently discovered a solution – the Baltimore Office of Sustainability has quietly begun accepting compostables every Sunday from 8 a.m. to noon.

They have set up table at Holliday and Saratoga streets, close to the old Hollywood Diner.

“I heard about it on Instagram – it’s great!” Iverson said, handing her bag of vegetable trimmings and other scraps to the Sustainability Office’s Ava Richardson, who was staffing the table. 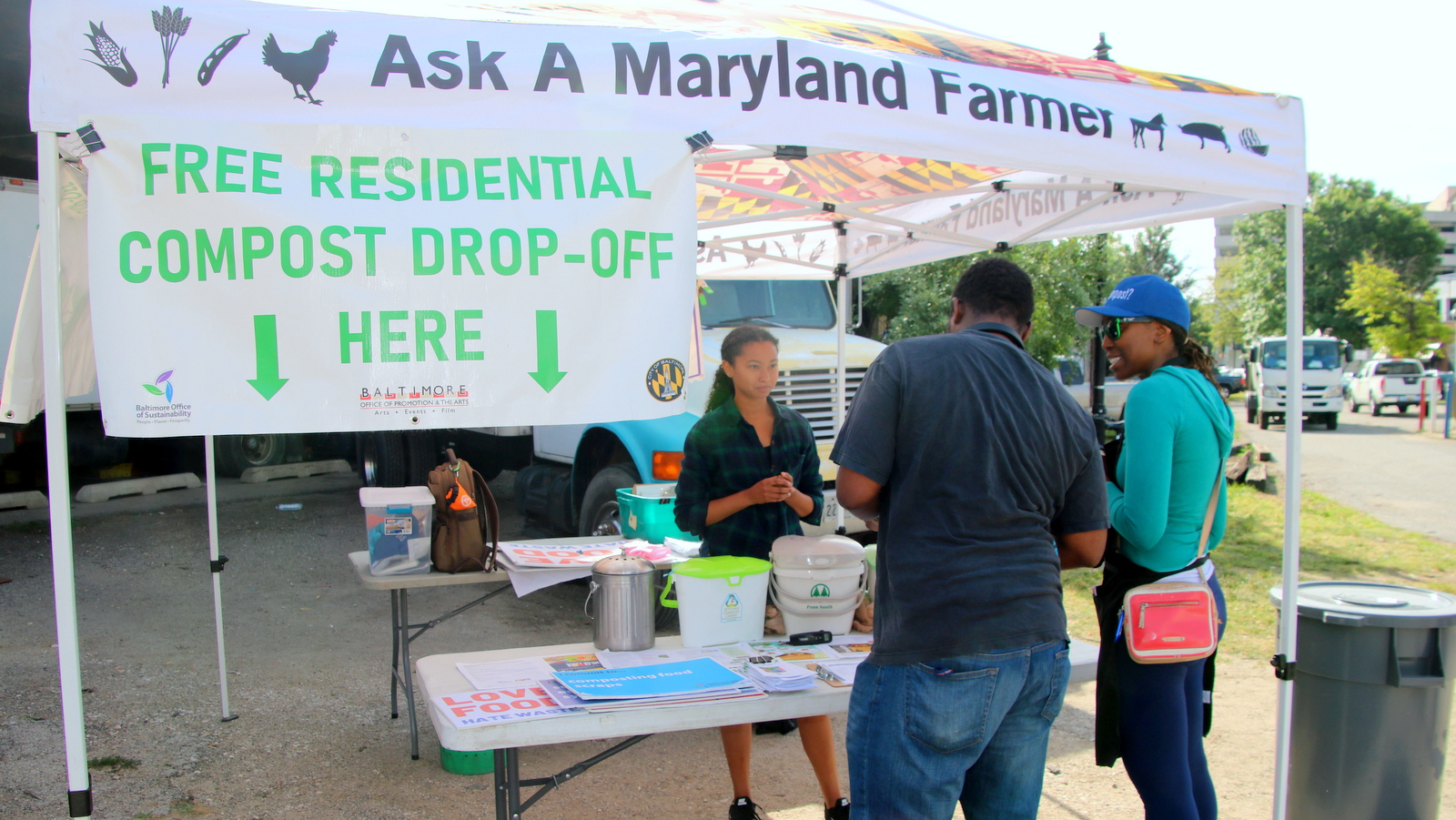 At the Sunday farmers’ market under the Jones Falls Expressway, compostables can be dropped off for free. (Fern Shen)

Richardson said the city will be accepting food waste at this location all summer – and eventually at other farmers’ markets – as a first step towards a Baltimore food waste collection and composting operation they envision to someday be “on a really large scale.”

For now, they’re just getting going.

“Word is getting out there,” she crowed.

Behind Richardson as she spoke were the market vendors hawking vegetables, fruit, flowers, mushrooms, herbs and more, including the farmer who is working with the city’s food waste collection program:

“Albright Farms, from up in Baltimore County, takes these food scraps and uses them for composting,” Richardson explained.

Most of the people who come to dump material into the big plastic bins know what is and isn’t compostable. But Richardson and intern Alyssa Wooden were on hand to provide guidance.

They also had a handout spelling out the dos and don’ts: 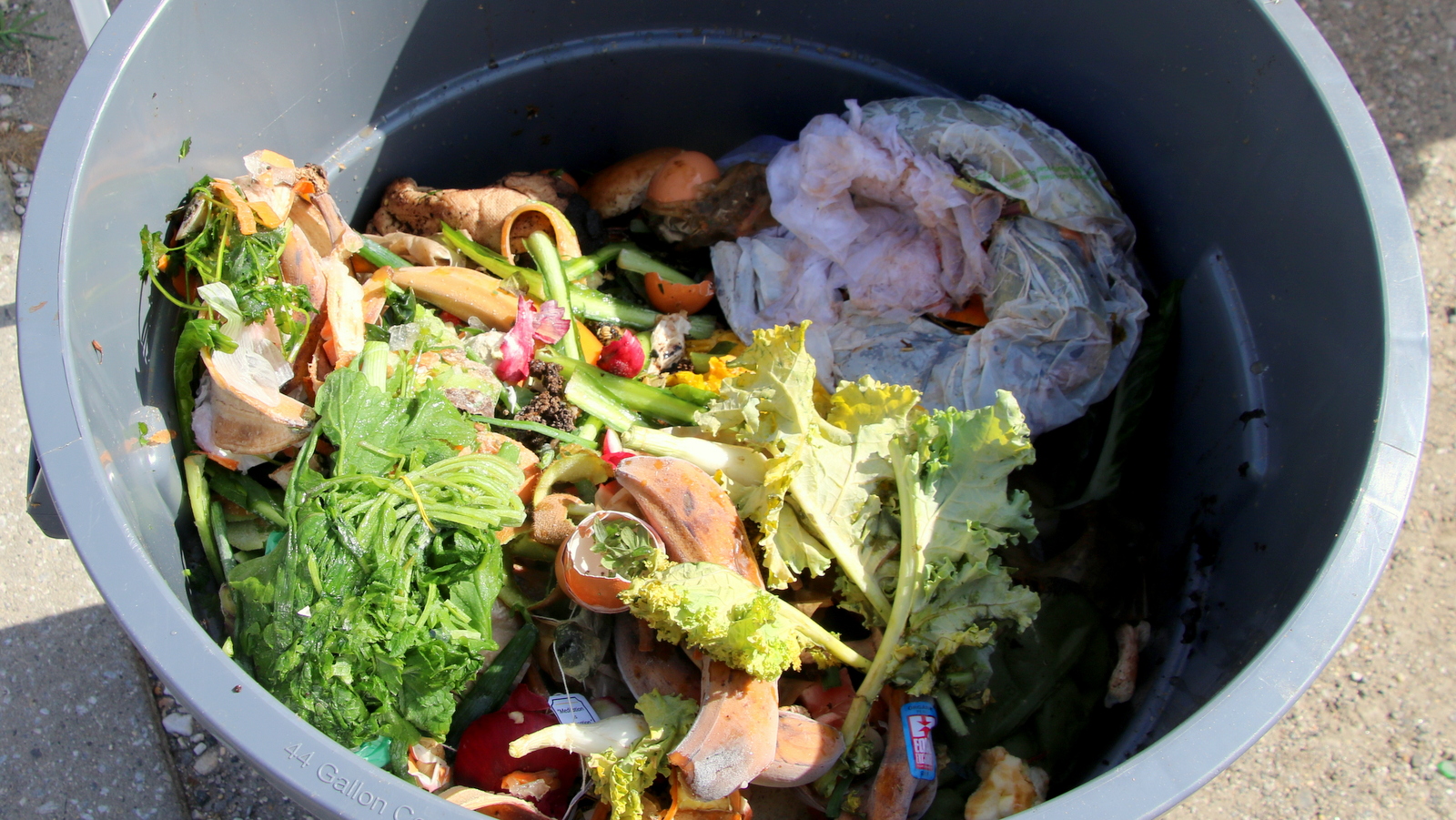 “Yes” to banana peels and coffee grounds. “No” to plastic or meat. (Fern Shen)

The goal is to reduce the massive amount of food that is wasted locally and nationally – as much as 40% of the U.S. food supply goes uneaten – and redirect the resource towards feeding people or enriching the soil.

“What we don’t want to do is feed landfills and incinerators,” Richardson said.

The composting program is part of the city’s grander plan to get food to those who need it,  improve the environment and wean itself off waste.

Baltimore produces 430,000 tons of municipal trash each year, and “the lion’s share of it is burned at the city’s trash incinerator,” according to the 2018 Food Waste & Recovery Strategy plan.

Almost half of a typical household’s trash is organic material, according to the strategy plan. 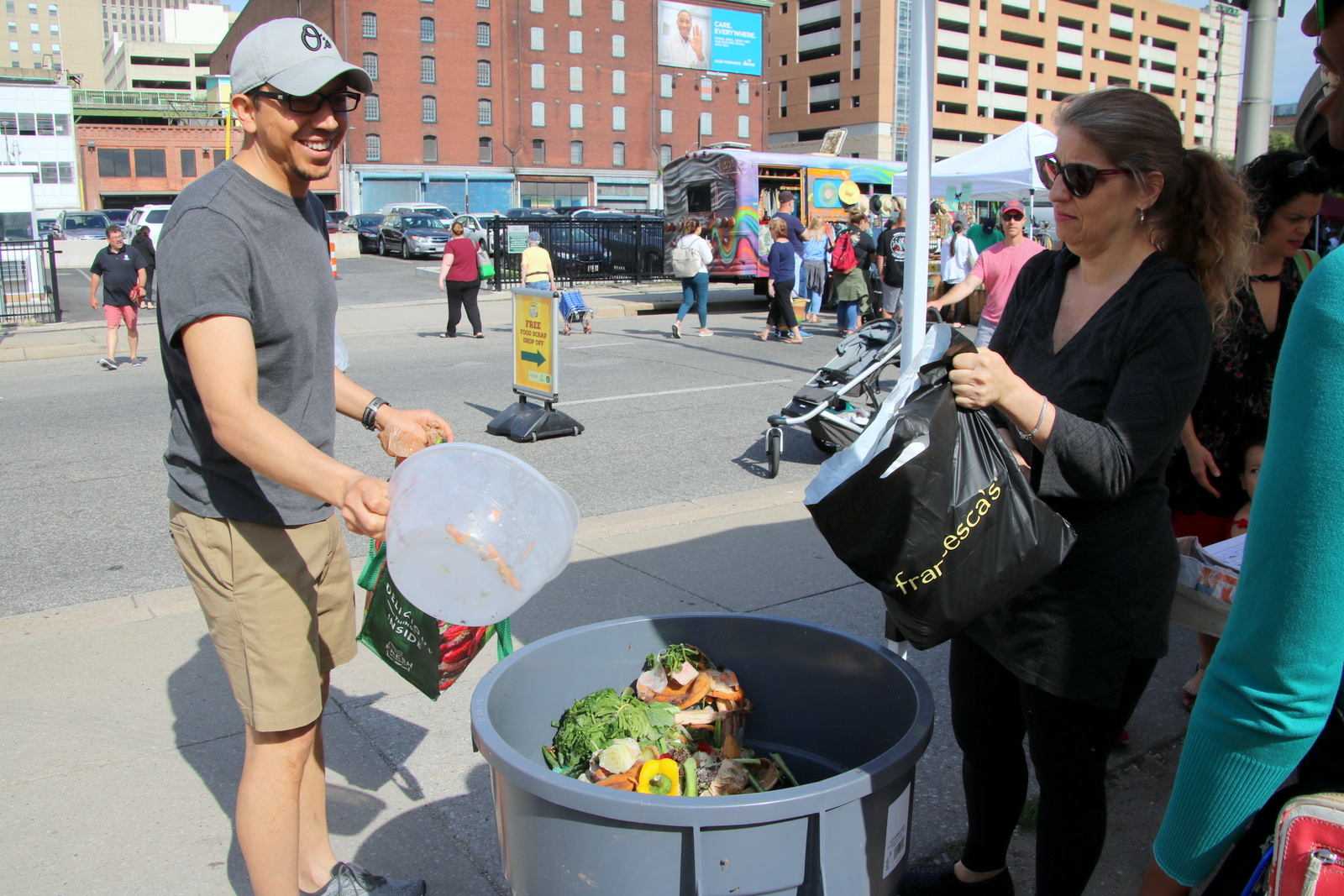 Baltimore’s Office of Sustainability is at the downtown Sunday farmers’ market this summer, accepting food waste for composting. (Fern Shen)

(“Reduction” means preventing waste and getting surplus food to people in need. “Diversion” means getting it to a composting facility instead of a dump or incinerator.)

Other cities are further along in the process, Richardson notes.

While Baltimore officials hope to have a large-scale municipal composting facility one day, they are now trying to build food waste recovery capacity and “a composting culture” little by little.

Their efforts got a major boost last year thanks to a $200,000 grant from the Natural Resources Defense Council and the Rockefeller Foundation. The funding supports Richardson’s position (she’s the “Food Matters Technical Advisor”) and a round of grants distributed to local groups.

Among them is the Countered Fresh Food Market, which provides rescued produce and food to more than 7,000 residents in Penn North and Reservoir Hill.

Another recipient is Whitelock Community Farm, operator of a composting system that has diverted over 13,000 gallons of food waste, and organizes workshops to teach composting methods. 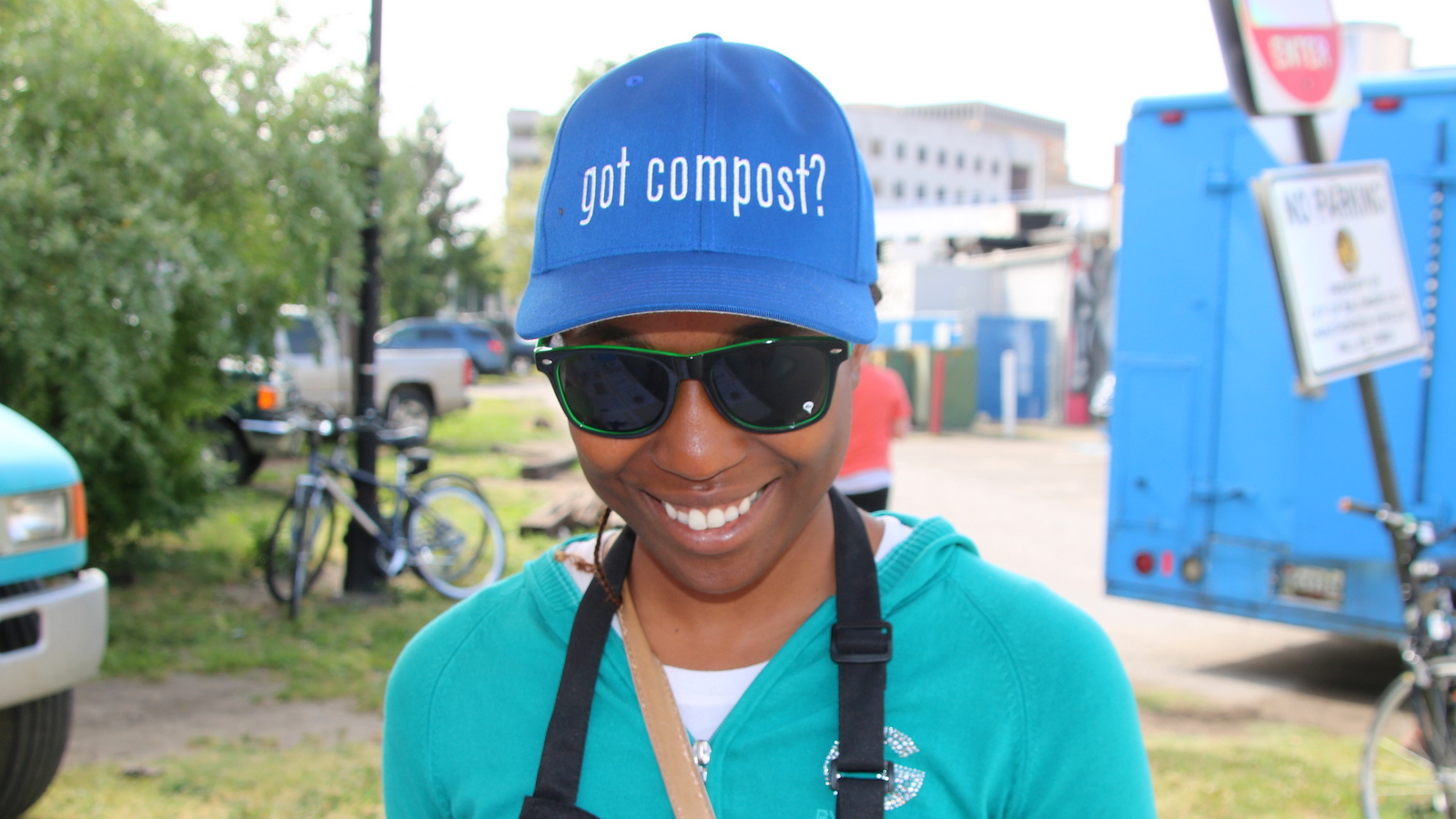 Supporting food recovery efforts can be tricky, Iverson acknowledges, after dropping off her weekly bag.

A busy Johns Hopkins University research fellow, she signed up for Hungry Harvest, which regularly delivers to her door a box of rescued products that farmers can’t otherwise sell.

But she can’t always manage to cook and eat the fruit and produce they send.

Baltimore’s Sustainability Office, she said, has helped her stay out of food waste trouble.

And noting that the compost collection is free, she added, “The price works for me!”