Hours after the story was posted, the MTA announced that the bench – whose detached anchor bolts had turned the seat into a perilous seesaw – was being repaired.

Four people had provided accounts to The Brew of being injured on the bench.

One of them, 68-year-old Curtis Brown, said he was taken to the UMMC Midtown Campus on May 30 after the bench tipped over and threw him against the shelter’s plexiglass window and concrete floor.

According to the MTA, repairs were in the works when The Brew posted the story. Spokesman Paul Shepard gave the following chronology:

“On Friday, June 7, MDOT MTA received a report from the cleaning contractor indicating that the shelter at North Ave. and McCulloh had a bench in need of repair. A work order was issued for the shelter on Monday, June 10, and the repairs were completed within 24 hours.”

Late yesterday, the re-anchored bench was occupied by three people waiting for an eastbound Gold bus.

Gerell, who asked that his last name not be used, said he was well aware of the wobbly bench, saying the anchor bolts had partly broken off weeks before. 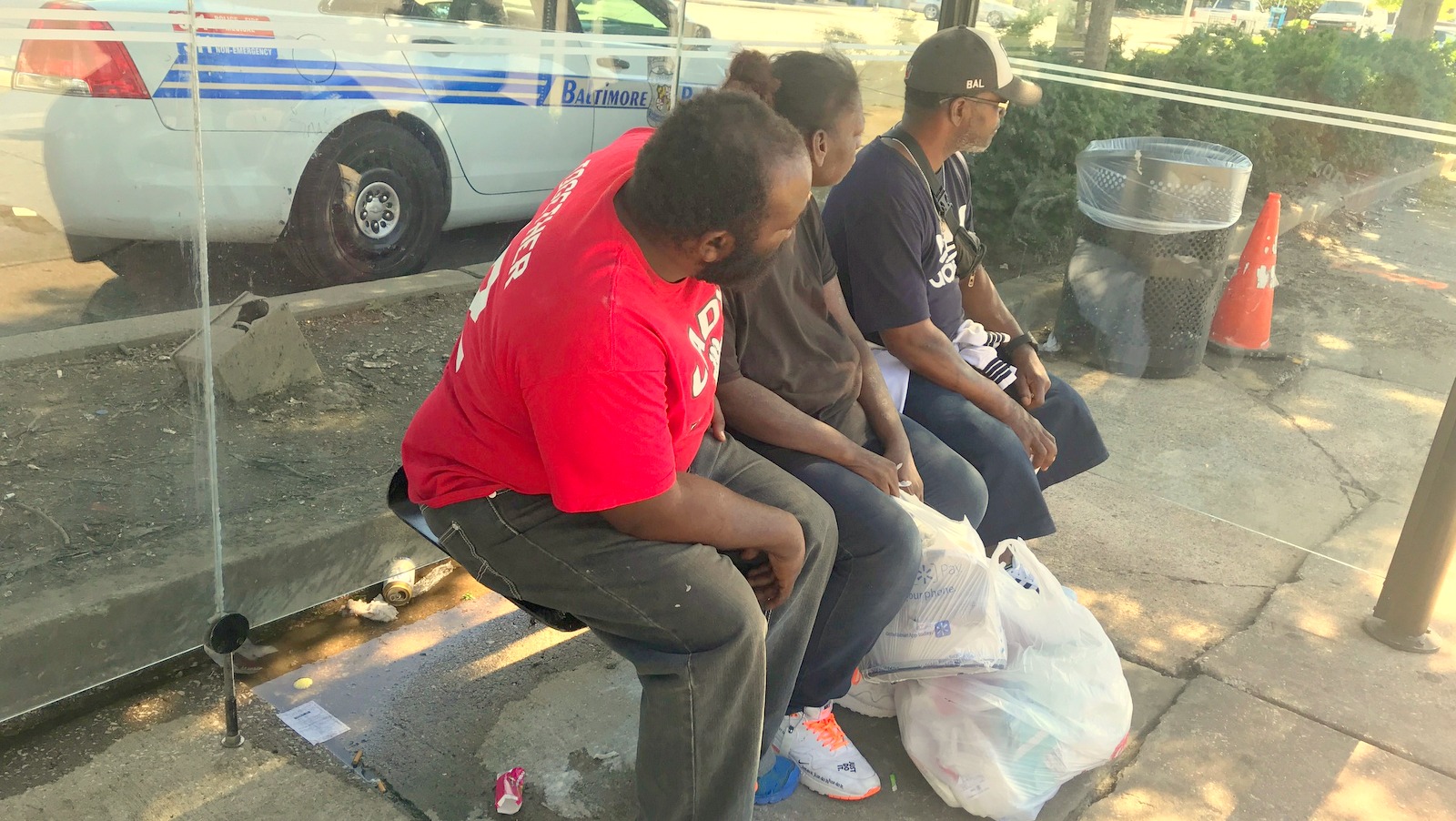 People wait for a bus yesterday afternoon on the repaired bench. (Mark Reutter)

“It’s been a mess for months. First, it was just loose. Then it got to tipping so bad you could fall off if you wasn’t real careful.”

Another waiting passenger named Brittany said the shelter was always dirty because “it don’t count to the MTA.”

She explained, “This ain’t a major transfer point like Penn North or Greenmount [Avenue] or the Light Rail. So nobody cares.”

“Here’s what people say,” Gerell injected. “They say, ‘If this was Towson, this stuff wouldn’t happen.’”

Why didn’t the MTA cordon off the shelter – as a safety measure – when it found out the bench was a hazard?

The Brew had contacted the MTA on Monday about the condition of the bench. There was no response until yesterday (Tuesday) afternoon.

Shepard did not explain why the agency had not cordoned off the shelter – as a safety measure – on Friday when the cleaning contractor noticed the broken bench. Instead, he said that “the report from the cleaning crew is general in nature and didn’t specify the condition of the bench.”

The fact that the bench was off its base was not verified until the agency conducted its own inspection on Monday. 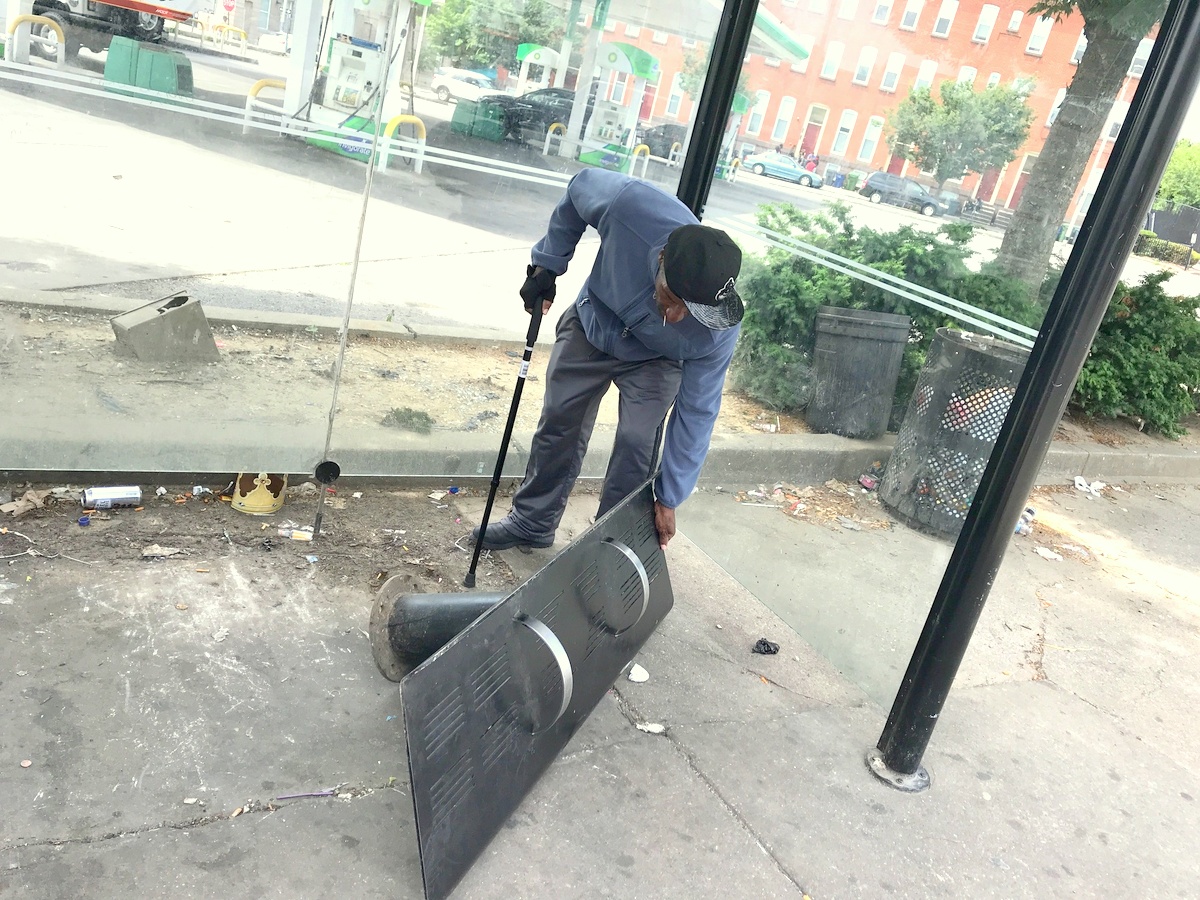 On Saturday, Curtis Brown showed how the bench had separated from the concrete floor. He said he was injured when it tipped over, tossing him against the plexiglass window. (Mark Reutter)

The shelter does not have a hotline phone number or email address for the public to report damaged property or other problems. Shepard said the public can use the MTA’s general information number (open from 6 a.m. to 7 p.m.) at 410-539-5000.

One problem the agency and city should tackle, according to Gerell, is the infestation of rats in the shrubbery that separates the bus shelter from the BP gas station at 1101 West North Avenue.

“See that,” he said, pointing to three tennis-ball-size holes a few feet from the shelter. “A rat just popped his head out of one of ’em. They come out in the day. They’re bold, man!”

He offered a prediction: “Someone’s going to get bit. Then everyone will get real concerned.” 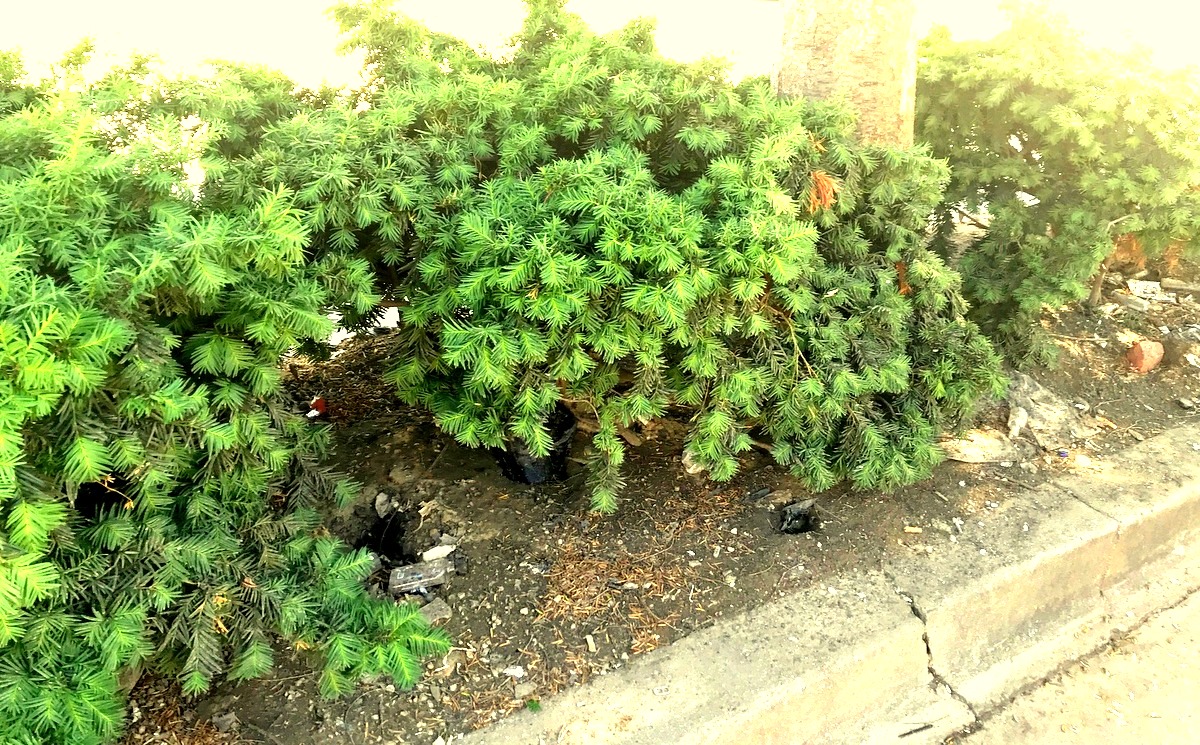 Next challenge: Getting rid of the rats that burrow among the shrubs next to the bus shelter. (Mark Reutter)