The star of the show, however, was an inert (though stately and symbolic) object – an 11-foot tall stone lantern given to Baltimore 35 years ago by its sister city, Kawasaki, Japan.

The ceremony was organized to commemorate the anniversary of the gesture and because, in 2020, the lantern will be moved across the harbor to a spot near the World Trade Center as part of the planned renovation of Rash Field Park.

Among Baltimore’s sister cities, Kawasaki has maintained one of the stronger relationships, stretching back 40 years to its creation during the mayoral administration of William Donald Schaefer.

That warm relationship, speakers said, addressing a crowd of about three dozen people, is symbolized by the low-key Kasuga style lantern that has been standing near the Maryland Science Center for decades.

“The lantern is the touchstone of the Baltimore-Kawasaki group,”  said Kathleen (Kathy) Shiota, Co-Chair of the Baltimore Kawasaki Sister City Committee. (Her husband, Yoshinobu Shiota, is the other co-chair.)

The celebration began with a traditional salute by the Miyako Taiko drumming group.

A representative from Mayor Bernard C. “Jack” Young’s office presented a citation to the Shiotas lauding the 40-year-relationship “that has fostered international goodwill and opportunities and shared experiences among the people of Baltimore and Kawasaki, Japan.” 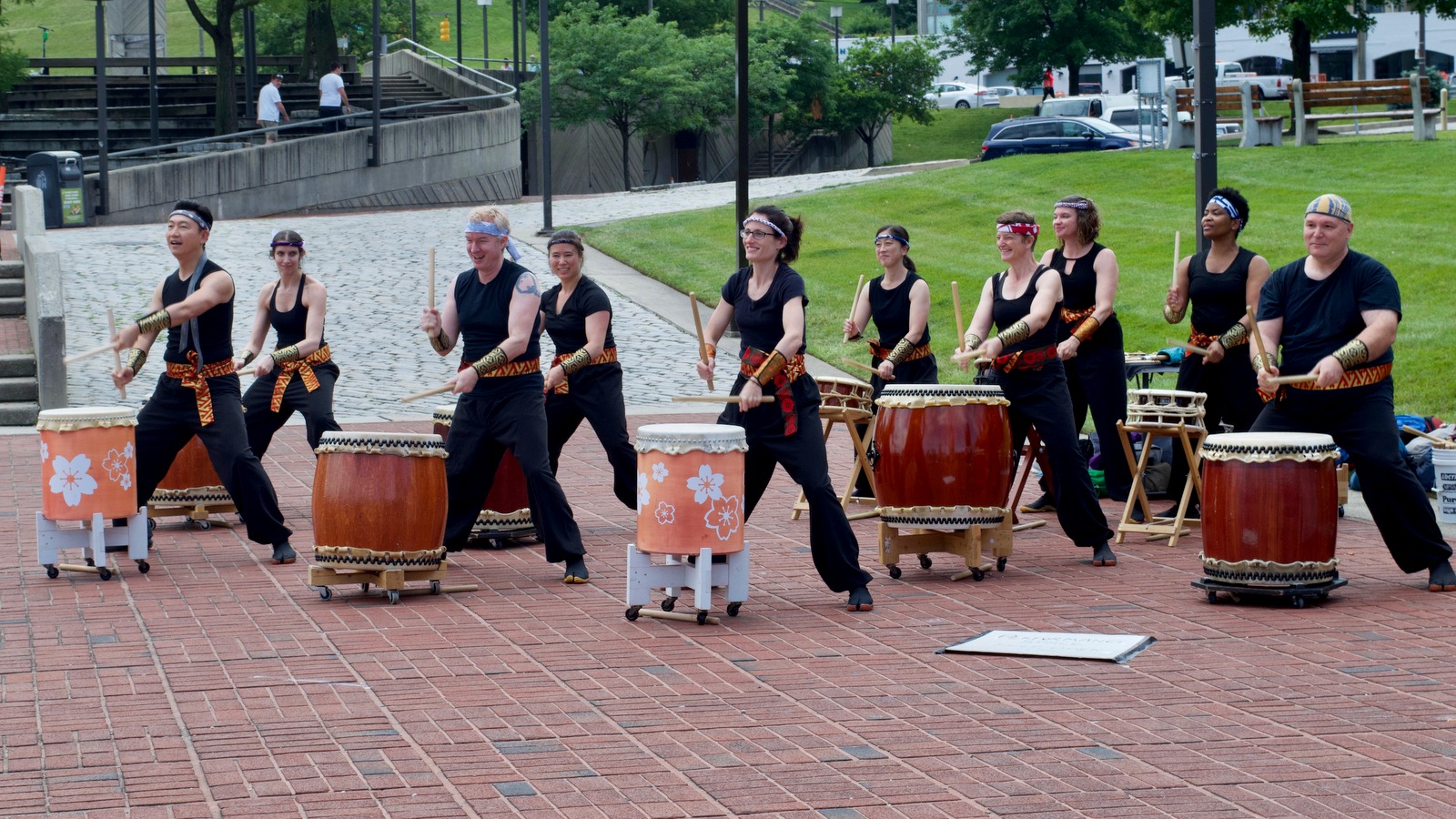 Miyako Taiko led off the lantern ceremony with a drum salute. (Lizzie Kane)

A message from Kawasaki Mayor Norihiko Fukuda was read, expressing his thanks to the organizers and his wish “to see continued progress and exchange activities and stronger ties between our two cities.”

“The spirit of my piece is really about falling in love with Baltimore,” Mears told the crowd. “It was a time of great hope in Baltimore.”

Mears, whose sculpture sits in front of the train station in Kawasaki, explained that the piece referenced waves and water to evoke “energy and life force” and the fact that Kawasaki, like Baltimore, is a port city.

As for the name, “People who are sailors [know] ‘red right returning’ is the way that you remember that you want the red buoy to the right when you are coming into the harbor,” she said. 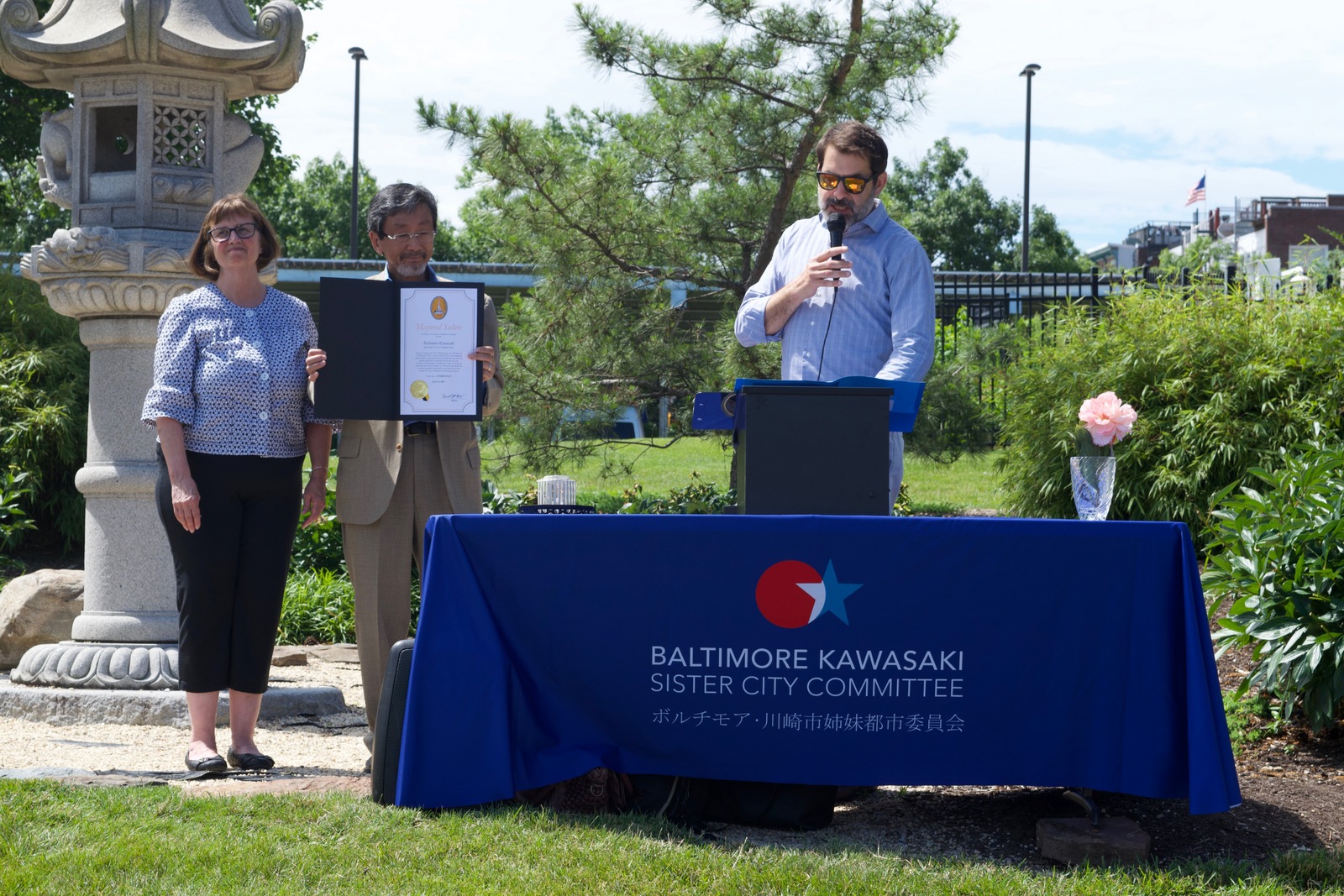 The organizers promise other celebratory events and exhibits through October, when Mayor Fukuda is scheduled to visit Baltimore.

The “exchange activities” Fukuda referenced in his statement includes the Baltimore Kawasaki Scout Delegation, an exchange program between co-ed groups of scouts in both nations.

The groups take turns visiting each other with the support of dedicated leaders, including Satoko Kajima-Best, who has served as an interpreter for the program for more than 10 years.

Another activity is the Cherry Blossom Princess Program a 70-year-old cultural and leadership initiative that brings women from across the country to Washington.

“It allows young women to engage in diplomatic efforts between the United States and Japan for a week,” according to Przyborowski who is also a graduate student at Johns Hopkins University.

At the end of the ceremony, Przyborowski had the honor of lighting the lantern with Fumiko Campbell, another member of the committee.

After the ceremonial lighting, Kajima-Best, along with the help of the scouts, led a “Sakura Saku Ondo” dance with the crowd of invited guests.

And, in keeping with the idea of cultural exchange, some delighted passersby joined in.