A local carpenters’ union is raising questions about the business practices of former Baltimore Mayor Catherine Pugh’s home contractor, Kevin Johnson, and spreading the word that one of his companies is being sued for “wage theft.”

The union has stationed representatives just outside a construction site on York Road in Towson, distributing flyers and displaying a large banner that airs its grievance against Commercial Interiors, one of the companies in Johnson’s Hanover-based Commercial Group.

The union’s accompanying flyer spells out the accusation in greater detail:

“Commercial Interiors Inc.,” it states, “subcontracted drywall work to a series of labor brokers who often shortchanged workers. Commercial Interiors along with their business partners are bad for our communities and workers in the construction industry. Does Towson University care???”

The protest was mounted by the Keystone + Mountain + Lakes Regional Council of Carpenters, a Pittsburgh-based organization that has members in Maryland.

Its representatives were stationed yesterday in the 7800 block of York Road, just off the site where Towson University is constructing a new science complex.

A university representative, Sean Welsh, said that the dispute did not directly relate to the university and referred questions to Commercial.

John Barber, a spokesman for the union, said the banner is being displayed as part of a public awareness campaign to call attention to the way Commercial Interiors does business.

Two lawsuits are pending against Commercial in the District of Columbia. Barber said the union wants Marylanders to know about them because Commercial Interiors is active in Maryland.

He said the Towson site was selected because Commercial Interiors is currently working on the publicly-funded science complex as a subcontractor.

Both legal cases pertain to work performed by Commercial at the Grand Hyatt Hotel in Washington.

They involve a practice by which a contractor brings a foreman onto a site, but then arranges with brokers to provide the actual laborers. Workers can be shortchanged if the broker misclassifies them by calling them independent contractors rather than company employees.

If they are so misclassified, the employer does not take money out of their pay to cover the workers’ compensation or unemployment insurance they are supposed to have. The brokers may also circumvent minority hiring goals required on certain projects. 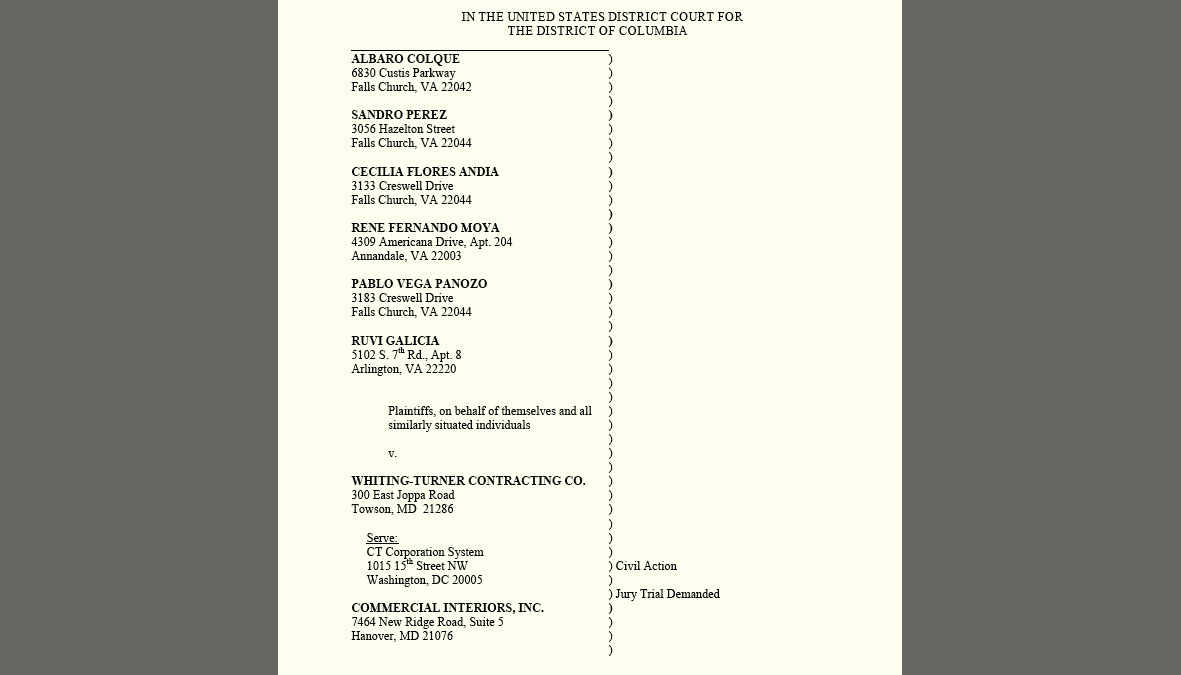 One of two lawsuits filed by the carpenters’ union against Commercial Interiors and Whiting-Turner Contracting Co. (case 1:16-cv-00641)

The first case pits six plaintiffs who worked as carpenters or carpenter’s helpers at the Hyatt site in late 2015 and early 2016.

Albaro Colque, Sandro Perez, Cecilia Flores Andia, Rene Fernando Moya, Pablo Vega Panozo and Ruvi Galicia claim they did not receive overtime for weekly work in excess of 40 hours and, in some cases, were not paid on some weeks by Commercial.

Colque said he was terminated after complaining about not being paid, while others said they simply quit.

They also charge that Commercial did not deduct withholding taxes and mislabeled them as independent contractors.

The general contractor on the project, Whiting-Turner Contracting of Towson, is also named in the suit. A representative for the company declined to comment.

The first case was filed in the U.S. District Court for the District of Columbia and is an action to recover damages for the defendants’ “willful failure to pay wages.”

Asked why the union mentions Towson University in its flyer, Barber said it’s part of the public awareness effort. “We’re not saying they condone anything,” he said of Towson. “We’re asking a question. You’d think they’d want to have contractors that are playing by the rules everywhere, not just in certain places.”

Johnson did not respond to a request for comment. 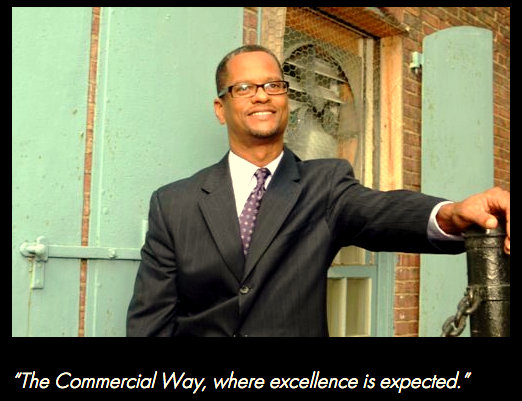 As CEO of Commercial Group, which includes Commercial Interiors, Johnson is the contractor who renovated Pugh’s home in Ashburton at a steeply-discounted price shortly after she became mayor in 2016.

He and his associates also failed to obtain permits for exterior work on the house, as required by city law.

Pugh resigned on May 2 after the FBI raided her house and City Hall office following reports about her undisclosed sale of self-published “Healthy Holly” books to the University of Maryland Medical System, Grant Capital Management and others.

More recently, Johnson has stopped work on the site of The Hendler, a $75 million mixed-use development that was supposed to bring 296 apartments to the former Hendler ice cream plant property at 1100 E. Baltimore Street.

A Mess in Jonestown

Johnson’s Commercial Development unit has left piles of rubble at the Jonestown site.

The walls of the historic Hendler building are precariously propped up by metal bracing. Community leaders say they haven’t heard from Johnson in months and want to know what happened.

Barber said Commercial Interiors is one of several contractors his union plans to single out for practices it believes are breaking the law.

“We’re going to start exposing all the contractors that aren’t playing by the rules,” he said. “It’s a race to the bottom line in the construction industry, and it’s becoming the norm.”

Ultimately “we want to see every contractor treat workers the way they’re supposed to be treated,” whether they’re union or non-union, he said. “That’s our goal – to protect workers’ rights.”