Will this year’s change in the boundaries of Artscape lead to more traffic tribulations than usual for Bolton Hill, the neighborhood closest to a festival that will attract hundreds of thousands of visitors this weekend?

The three-day festival starts on Friday, and residents began envisioning a nightmarish scenario when they saw an orange and black “detour” sign pop up on Monday at Mount Royal Avenue and Lanvale Street.

The sign directed traffic from Interstate-83 into their neighborhood.

A second detour sign, at Lanvale and John streets, then directed drivers to head even deeper into the neighborhood.

“Bolton Hill is the new detour area for Artscape,” Eric Biagioli posted on Facebook, including a video of drivers following the detour sign into the neighborhood from Mount Royal Avenue.

“Did [Artscape’s] layout change really necessitate this?” he asked.

What followed was a flurry of email messages and hasty meetings involving the city’s Department of Transportation, City Council representative Eric Costello, and members of the Bolton Hill Community Association.

FOR BACKGROUND:
• How a bungled bike lane disrupted Artscape and disappointed bike advocates (7/5/19)

Costello posted a Facebook message saying he met with the new director of DOT, Steve Sharkey, and supports the Bolton Hill residents.

“I’ve made it explicitly clear that any detours in the neighborhood outside of N. Howard Street, Mount Royal Avenue and McMechen Street are unacceptable,” Costello wrote.

Costello also posted a copy of a message he sent to DOT:

“We can’t push traffic through the middle of Bolton Hill during Artscape considering the tremendous impact this event has on the neighborhood coupled with the ongoing transportation issues that have gone unaddressed in Bolton Hill over the past 2½ years,” he said. 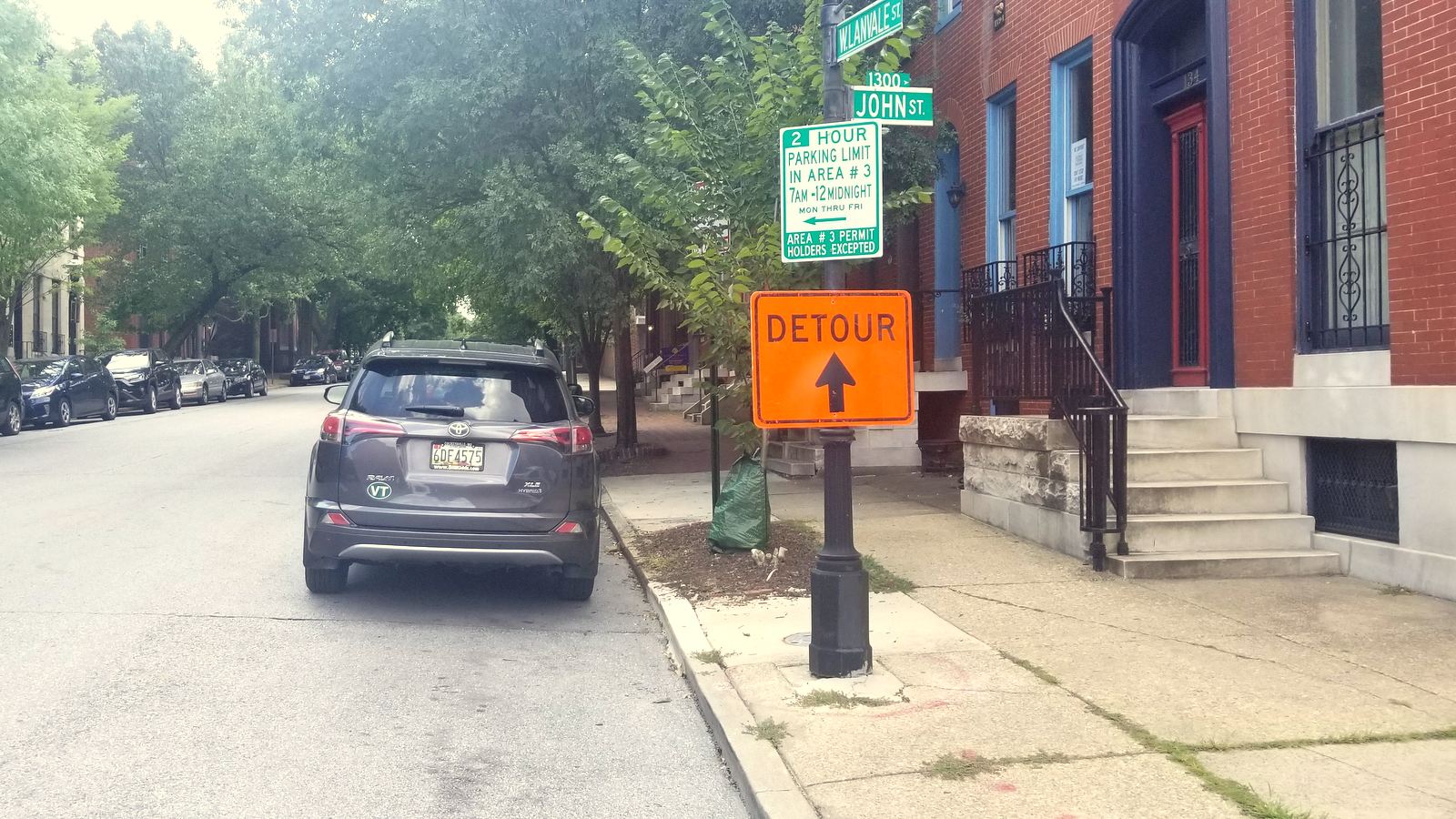 Last night, the president of the Bolton Hill Community Association said he believes the issue is on the way to being resolved, but he wasn’t sure exactly how.

David Nyweide, the president, said he has been told that DOT will make alternate traffic arrangements before the festival starts on Friday.

UPDATE: A new DOT detour sign appeared this morning at Mt. Royal and McMechen, directing traffic west on McMechen, while leaving open the option for drivers to still use Lanvale and other Bolton Hill streets.

“Since the detour signs went up, we’ve been trying to figure out an alternative that would be safer for the residents who live on our streets because it’s not designed to be a high traffic area,” he said. “We’ve been assured that they will be changed.

“I don’t think it was a change in the traffic that galvanized people to do something,” he said. “It was when we saw the detour signs go up.” Directing people to use Lanvale Street, he said, “is not a good option for motorists or residents.”

DOT communications manager German Vigil said that Sharkey, who was named to lead the agency on July 8, was not available to respond to questions about the detour signs and new traffic patterns.

Vigil said he would provide a statement from DOT about the situation. As of this morning, he did not provide any more information.

Artscape is reputedly the largest free arts festival in the nation and draws more than 350,000 visitors a year. This is Artscape’s 38th year.

Traffic is more of a concern for Bolton Hill residents this year because the “footprint” of Artscape has been changed, in part to avoid complications caused by a new bike lane along Mount Royal Avenue.

This year, the festival doesn’t go north of Dolphin Street and the Light Rail tracks. While one might think that change would keep the festival farther away from the homes in Bolton Hill, it also means that sections of Mount Royal Avenue that were closed to traffic in past years won’t be displaced by the festival this year.

Mount Royal Avenue is a concern because Interstate 83 has an exit that channels drivers onto that street, and many drivers use it to get downtown or to Martin Luther King Jr. Boulevard from I-83.

When Mount Royal is closed south of Dolphin Street, as it was this week for Artscape preparations, drivers need an alternate route. The detour signs posted by DOT this week identified Lanvale as the detour, which has not been the case before.

Nyweide said two solutions have been proposed, one using McMechen Street as the detour and the other using North Avenue:

• Close Mount Royal south of McMechen and direct traffic from I-83 to turn west onto McMechen and then south on Eutaw Place.

Nyweide said he believes closing Mount Royal Avenue at North Avenue is the better option, but both were under consideration as of Tuesday night.

Nyweide added that he is grateful for Costello’s help and impressed by how responsive DOT has been under its new director.

If DOT can avert a calamity with Artscape, Nyweide said, “hopefully they will be responsive to other issues in this neighborhood, too.”