After hearing the results of a neighborhood survey in which many residents said they wanted to see Cab Calloway’s childhood home saved from the wrecking ball, community members were told that such an option was off the table.

“No, we’re not restoring the building,” Richard L. Edwards, president of the Druid Heights Community Development Corp. (DHCDC) board, said at a public meeting on Saturday.

Instead, residents were presented with two design concepts. Both would retain the brick and stone facade of 2216 Druid Hill Avenue as a gateway arch to a proposed Cab Calloway Square.

Some additional bricks and perhaps the marble steps could be incorporated into a walkway, Jacquelyn D. Cornish, chair of the DHCDC executive committee, said.

The rest of building would be cleared as a public nuisance given its deteriorated state.

“Why are we having this discussion about [what] citizens think when you’re going to tear down the building anyway,” asked Willie Turner, who said she has lived in Druid Heights for 35 years.

“We don’t want a little statue there,” Turner added, voicing support for restoring the Calloway house into a museum or other public space.

“This is not going to be a Disneyworld. It will be a park for the neighborhood,” Edwards said, as Cornish described the design concepts presented as “professional recommendations with input from community members.”

Asked why the plan did not include restoration of the Calloway house as an option, architect Brian Reetz said, “My team doesn’t have the authority.” 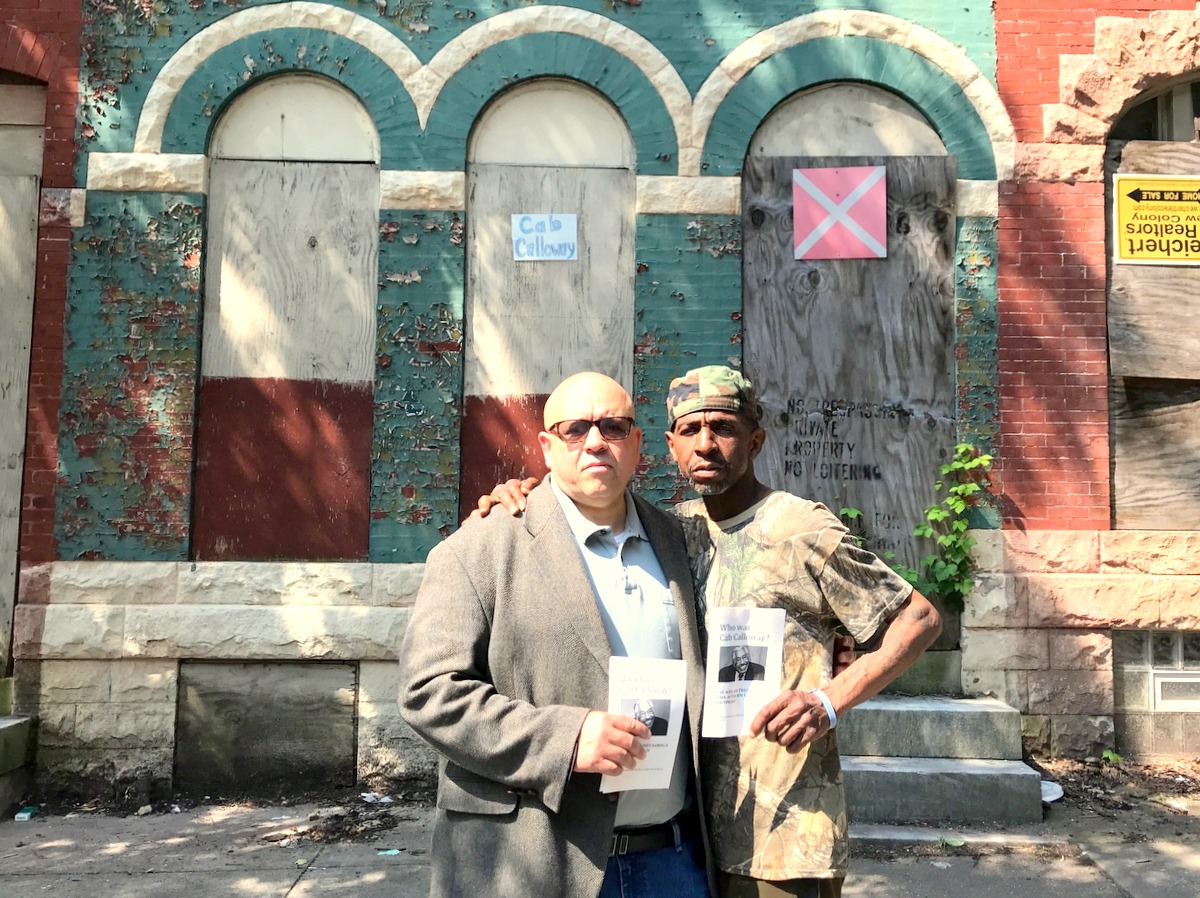 Cornish, Edwards and Reetz were all reacting to a request last month by Peter Brooks, the late bandleader’s grandson, to delay the teardown to give his family and others time to formulate plans on how to retain the building.

Brooks said a restored Calloway house could become a tourist attraction and serve as a catalyst for economic development in the West Baltimore community.

His idea has attracted much public attention as well as kudos from groups like the Tupac Amaru Shakur Foundation.

Cornish acknowledged all of the attention on Saturday, which she said was probably good for the neighborhood but, she also complained, was overshadowing the accomplishments of her organization.

“We’ve been around for 45 years, and our story isn’t out there,” she told the 25 people who attended the meeting, which was held a block from the Calloway house.

Out of the 70-odd houses originally on those blocks, the 14 rowhouses fronting Druid Hill Avenue remain as the only significant buildings.

The rest of the properties have been torn down, except for the Patterson Asbury AME Zion Church on Division Street, would be retained under the two plans unveiled on Saturday. 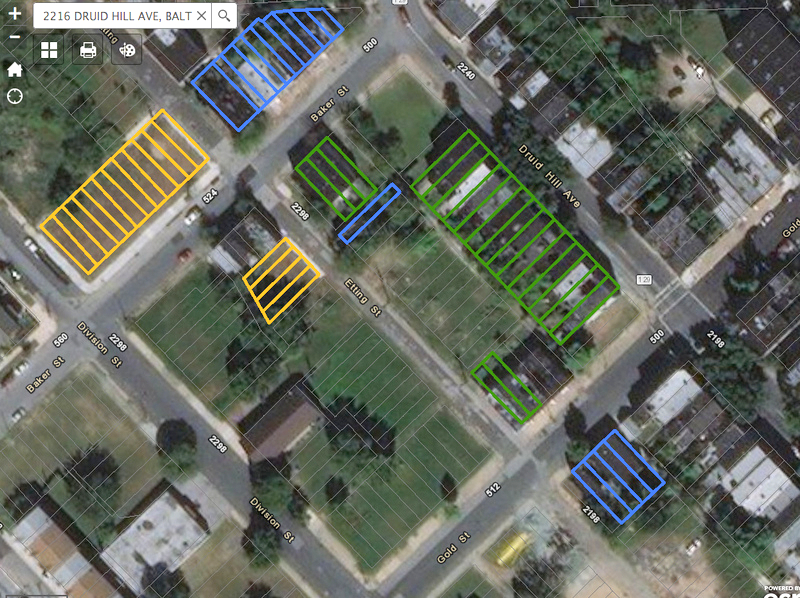 The buildings outlined in green, including the Cab Calloway house, are scheduled for demolition under Project C.O.R.E. The blue and yellow lines denote buildings recently torn down. The white lines show what existed when Calloway lived in the neighborhood. (Project C.O.R.E.)

The city housing department has spent a total of $319,000 purchasing the 14 rowhouses, according to state land records. The buildings are currently slated for demolition under the state-financed Project C.O.R.E. (Creating Opportunities for Renewal and Enterprise).

The former Calloway house, for example, fetched a price of $30,000 when the block still was inhabited by renters back in 2006.

Under municipal ownership, the house has been condemned by city inspectors as “uninhabitable.” At present, much of the roof and some parts of the flooring are missing.

After years of neglect, Cornish says the some of the houses are liable to collapse in a heavy storm due to their advanced state of dilapidation.

The city has committed $700,000 to prepare the general site, according to Cornish and DHCDC executive director Anthony Pressley.

The square itself would cost $5 million and $10 million to develop, Cornish said. As envisioned by landscape architects Design Collective, the three-acre site would include wooded walkways, a playground, a small stage and a sweeping event lawn, together with the gateway “arches” composed of the Calloway house facade.

No money has been firmly committed to build the square, but DHCDC Executive Director Anthony Pressley said he believes the city looks favorably on the project.

It would be part of the Baltimore Green Network Plan, described as a “collective vision” to establish trails, parks, public squares and urban gardens replacing vacant and abandoned buildings in the city’s poorest neighborhoods.

Druid Heights is a prime candidate for what the Baltimore Office of Sustainability describes as “community nodes” that would be integrated with new development. The concept plans for Calloway Square include space for “potential future building.”

Across from the Calloway house, on the odd side of Druid Hill Avenue, the CDC plans to rehab and sell a string of abandoned rowhouses to homeowners. 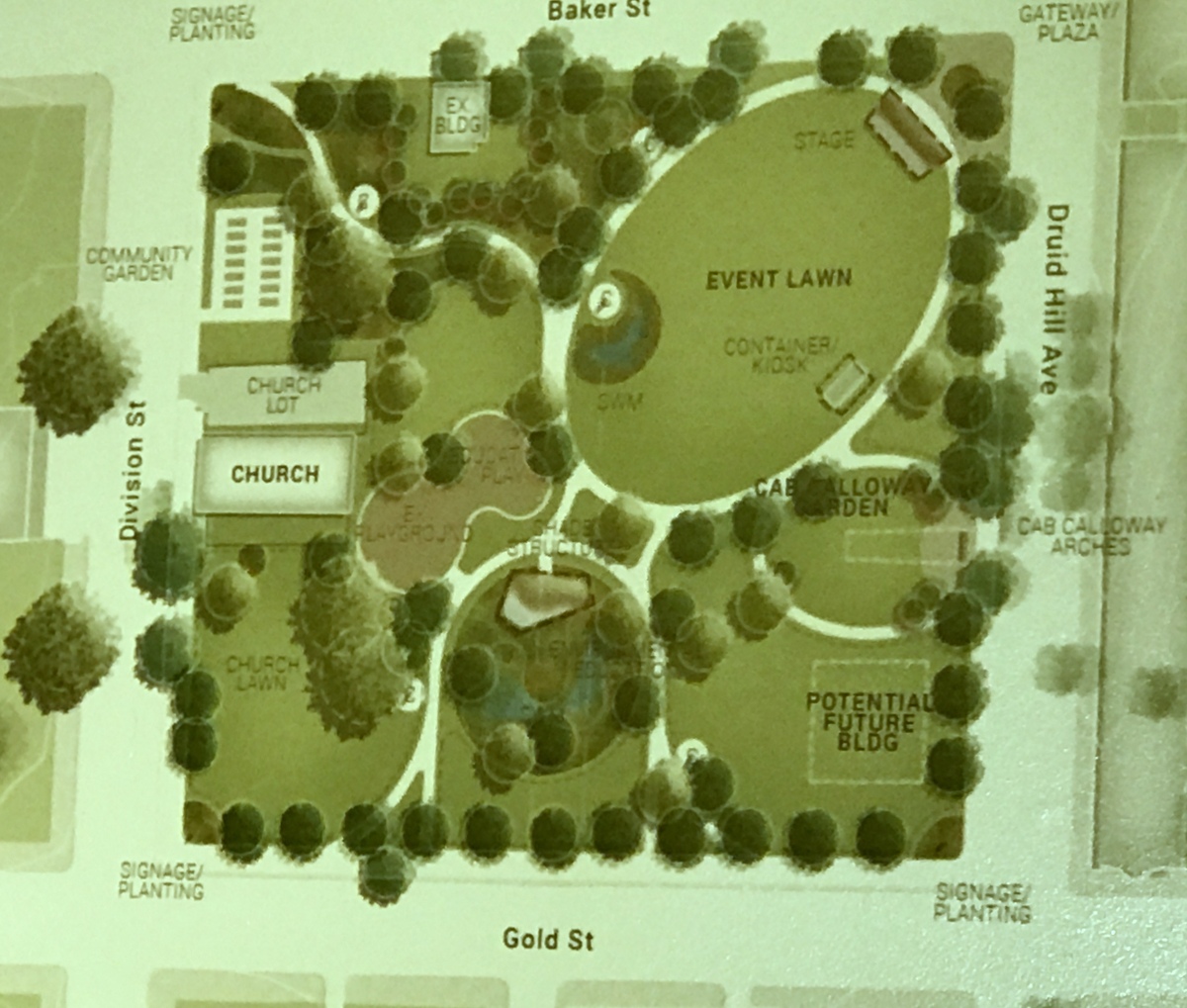 Concept A for the proposed “Cab Calloway Square.” Concept B would shift the focus of the event lawn to the Cab Calloway Arches along Druid Hill Avenue. (Design Collective)