The 65-year-old Drug City Pharmacy in Dundalk is not just a place to get a prescription filled.

It’s a community hub where people can mail a package, pick up a bottle of wine, attend the store’s annual block party or buy one of its local history-themed coloring books with pages devoted to landmarks like the now-leveled Sparrows Point steel mill.

It’s also appropriately named, being the biggest recipient of pain pills in the state of Maryland when the opioid epidemic was taking off.

This according to a newly-released trove of federal data that documents every prescription hydrocodone and oxycodone pill’s path – from manufacturers and distributors in every town and city – between 2006 and 2012.

During those years, Drug City received 16,391,690 opioid tablets, according to the Washington Post, which sued to gain access to the Drug Enforcement Administration’s Automation of Reports and Consolidated Orders System, known as ARCOS.

Drug City’s owner, George Fotis, who worked at the store but didn’t own it during those years, said he and the pharmacists there believed they were following the law.

“We were filling out what we thought were legitimate prescriptions,” said Fotis, a native of Baltimore’s Greektown whose first stint working at the North Point Point Road business was as a cashier in 1996.

“Yes, we were top five in pain pills. We were also top five in heart medicine, top five in reflux medicine,” Fotis said, speaking with The Brew as customers waited in line for the store’s five pharmacists to serve them.

“We didn’t do anything different than any other mom-and-pop drugstore. We just did it at a higher volume.”

Staffed with with 30 employees, serving a clientele of mostly retirees, offering everything from greeting cards and knickknacks to craft bourbon and nebulizers, Drug City’s role in the deadly epidemic was hard to see on a recent afternoon.

But now, as tens of thousands of Americans die from opioid overdoses annually, including more than 2,000 opioid overdoses in Maryland in 2018, the new data puts the spotlight on the gush of pain pills that pharmacies large and small dispensed a decade ago.

“America’s largest drug companies saturated the country with 76 billion oxycodone and hydrocodone pain pills from 2006 through 2012 as the nation’s deadliest drug epidemic spun out of control, the Post found, citing company data now being released “as part of the largest civil action in U.S. history.”

Fotis has his own perspective to offer on that process.

“We didn’t do anything different than any other mom-and-pop drugstore,” he said. “We just did it at a higher volume.”

And yet Fotis, who took ownership of the business in September 2016, knows there is more to the story of the opioid boom – and more to say about his store’s role in it.

On November 2, 2016, the previous owner, Mark Lichtman, and Drug City Pharmacy, Inc. acknowledged violating the Controlled Substances Act and agreed to pay a $900,000 settlement to the federal government. 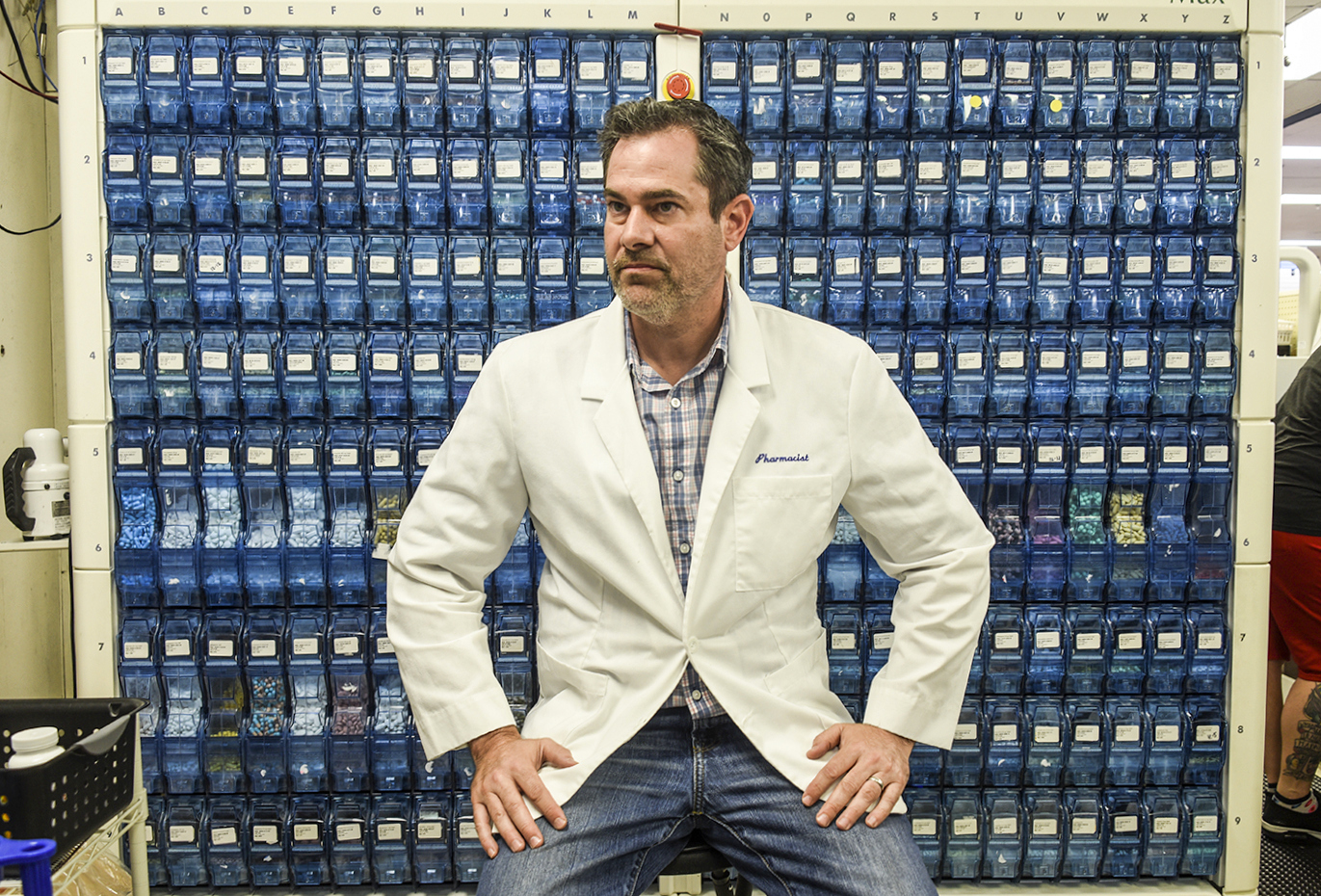 Between January 1, 2010 and April 4, 2012, the settlement says, the pharmacy failed to fulfill its responsibility to ensure that it “dispense controlled substances only pursuant to prescriptions that were issued for a legitimate medical purpose.”

During that time, Drug City was selling to individuals they “should have known were diverting controlled substances.”

There was no media coverage of the 2012 raid, and the 2016 settlement merited a brief press release by the Department of Justice.

“I always wish I could somehow move that [press release] down in the Internet searches,” Fotis said with a sigh.

Despite his misgivings (“No matter what, I’m going to come off sounding like I’m making excuses”), Fotis agreed to talk about what happened in the wake of the newly released ARCOS data.

Drilling into the Data

The Drug City prosecution came at a time when prescription painkillers were flooding the country.

Federal officials were pushing back, fining the largest drug distributors and pharmacies and tightening the supply, turning many addicts toward the next phases of the epidemic – heroin and the powerful synthetic opioid, fentanyl.

More pills were shipped to Baltimore County than to Baltimore City during this period – 38 pills per person in the county compared to 30 pills in the city.

“The abuse of prescription drugs has rampantly spread throughout our communities,” the Drug Enforcement Agency’s Karl C. Colder said in announcing Drug City’s sizeable settlement in 2016.

The tragic impact of this “gateway” relationship has been documented chillingly in local and national statistics and searingly in the lives of a wide swath of Americans:

• Nearly one-in-three people surveyed by the American Psychiatric Association said they know someone who is or has been addicted to opioids or prescription painkillers. 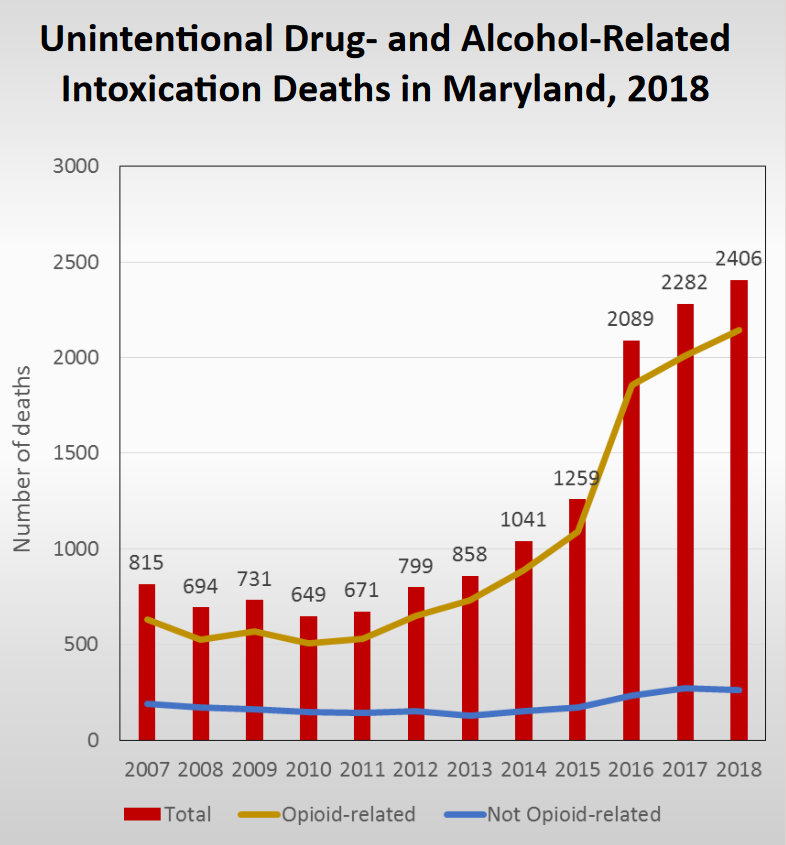 From the annual 2018 Maryland Drug and Alcohol Intoxication Report. (bha.health.maryland.gov)

The Post and HD Media, which publishes the Charleston Gazette-Mail in West Virginia, waged a year-long legal battle to get access to the data, which the government and the drug industry had sought to keep secret.

Litigation by states and thousands of local jurisdictions, including Baltimore, is now targeting opioid makers, distributors and others alleging they share responsibility for the epidemic. Drugstore chains are also being sued.

“Doctors and pharmacists are the gatekeepers in preventing abuse and diversion,” Rod J. Rosenstein, former U.S. attorney for Maryland, said in the Drug City press release.

“We trusted the doctors”

It was a different era before federal agents descended on the North Point Road pharmacy, according to Fotis. “We trusted the doctors. Of course, there were dirty doctors, but we felt we knew who to trust.”

Fotis began at Drug City just as he was starting pharmacy school. Training under the eye of the store’s original owner, Harry Lichtman, Fotis said he immediately took a shine to the work.

“I always knew I wanted to run the store one day,” he said, never imagining that the ownership change would happen in the shadow of a federal prosecution.

During the late 2000s, the very years pinpointed in the federal data, the message from the doctors began to change.

“It became a thing where the thinking was, ‘We are not treating pain enough,’” he said. “The doctors were saying, ‘George, you know there is no ceiling on narcotics.’ I thought, ‘Wow! Well, they’re the doctor.’”

“People forget, there are cases where patients are thrilled to get this medicine to relieve real pain. They tell you, ‘Hey, look at me, I can move around!’”

The more aggressive prescribing, in some instances, seemed to him legitimate. “People forget, there are cases where patients are thrilled to get this medicine to relieve real pain,” he said. “They tell you, ‘Hey, look at me, I can move around!’”

Fotis said he reported abuse when he suspected it, pointing to commendations on the wall, like the one from Baltimore County Police noting his 2009-2010 assistance in fraudulent prescription cases leading to multiple conviction.

But some painkiller customers, he now realizes, should have been a red flag. “I feel, we were all learning,” he said, meaning all pharmacists.

“Did we do things I would cringe at now? Yes,” he volunteers. “Younger kids – you look at them and they have that glazed-eye look,” he said. “Even if we had a prescription from a doctor we trusted, I wouldn’t fill it for them now.” 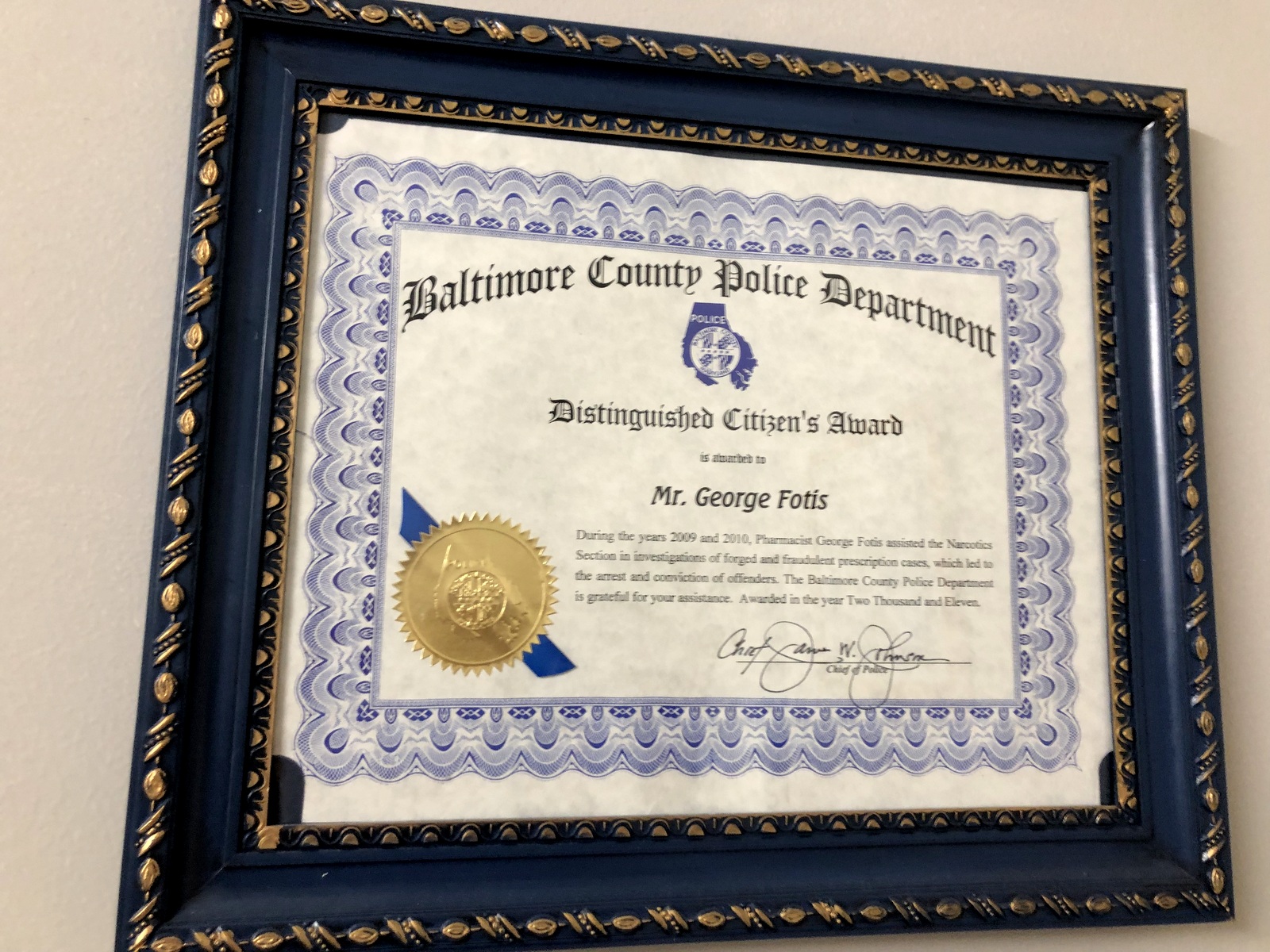 Outside a nearby methadone clinic, Michael Maynor says he’s not surprised to hear that Drug City was the state’s biggest recipient of prescription pain pills not long ago.

“They’ve been there so long, a mom-and-pop, a lot of people in this area just are loyal to them,” he said, describing the store as more personal and friendly than chain drugstores.

“There was just two employees here talking the other day about CVS – how they had such a hard time getting their medicine there,” Maynor said. “They’re tired of all these big pharmacies that don’t treat people with respect.” 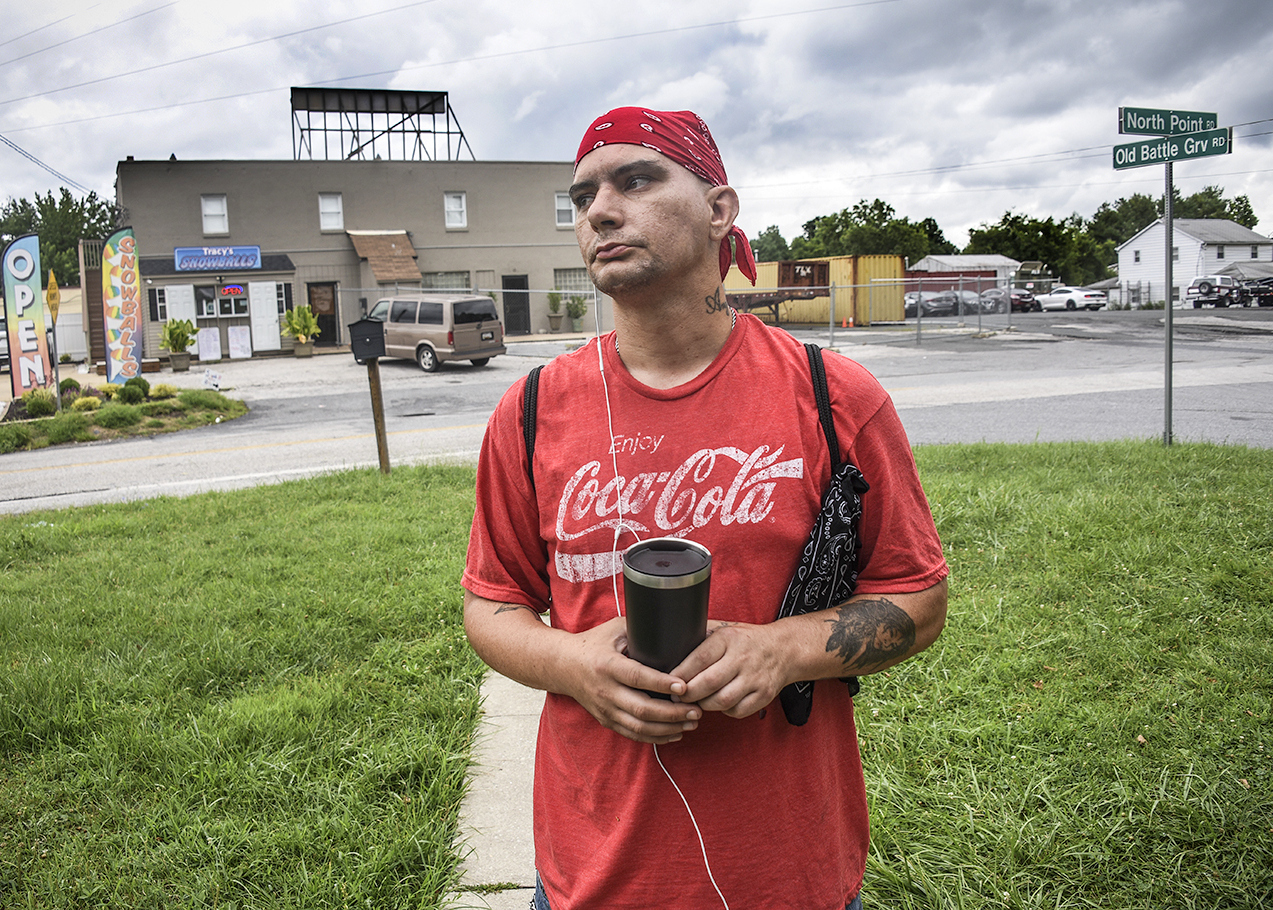 At Drug City “everybody knows everybody – they know your name,” Maynor said, likening the store to the old sitcom “Cheers.”

Maynor, who describes himself as “Dundalk born and bred,” said he is on disability but works at his father’s tractor trailer business.

“I been on methadone for seven or eight years,” he said, outside the facility at the intersection of Battle Grove Road and North Point Road where he receives treatment. “It’s kept me off drugs.”

Thinking more about Drug City’s popularity, he volunteers that it does not stem from accepting fraudulent prescriptions.

“If you want to bust a scrip – make a fake scrip – that wouldn’t be the place to go,” he said. “I’ve seen people go in there and try to use phony prescriptions and stuff. They would say, ‘Try somewhere else, but we’re not going to fill em.’” 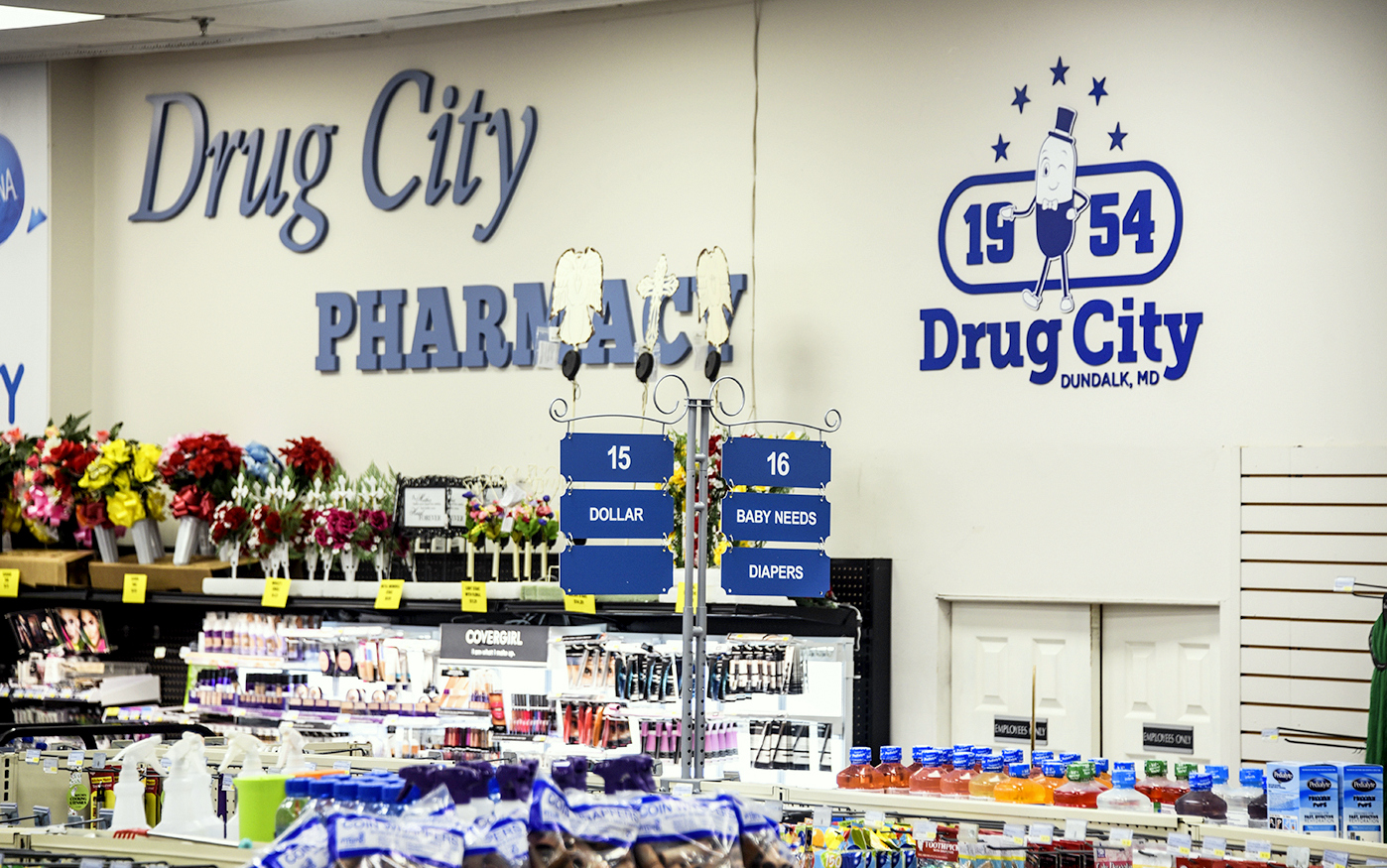 That aligns with what Fotis says about the changes Drug City made after the DEA showed up.

They no longer sell the higher dosage 15 and 30 milligram tablets. And for the 5 and 10-milligram pills, they impose a limit of 120 pills a month.

“And we only deal with doctors we know,” he said. “And if something doesn’t feel right, even if it’s a doc we do know – we don’t do it.”

Drug City is not the only pharmacy at the top of one of the Post’s data sets to be hit with federal prosecution.

In Baltimore, Newcare Home Health Services, in the 3400 block of Sinclair Lane, was the biggest pill recipient in the city, getting 6,133,600 pain pills from distributors between 2006 and 2012.

But the mail-order-only pharmacy long ago went out of business – its owner-operators convicted in 2008 of selling almost 10 million units of hydrocodone illegally over the Internet to anyone with a valid credit card.

Federal prosecutors said the company filled prescriptions emailed to them that were signed by a small group of doctors who never actually saw the customers. Newcare was paid $20 for each prescription it filled.

In terms of those receiving opioids, the biggest number of pills went to rural jurisdictions in Maryland, especially on either side of the Chesapeake Bay.

In addition to the high per-person usage in Kent County cited above, Calvert, Cecil, Wicomico and Worcester counties had substantially more pill usage than either Baltimore County or Baltimore City.

On the other hand, the least prevalence of opioids were in the Washington suburbs – 15 pills per person in Montgomery County, 16 pills in Prince George’s County and 23 pills in Howard County.

For more on what the Washington Post uncovered, check out The Opioid Files.