The Baltimore Sun journalists who have taken their bylines off stories this week in protest are offering readers a narrative they hope will be compelling – their own.

After foregoing salary increases in previous contract extensions – and seeing other Tribune Publishing Co. employees get raises and shareholders reap a $56 million cash dividend – Sun employees are fighting a proposal they say is an attempt to “systematically dismantle” their contract.

“There’s some energy in the newsroom because people are so dismayed by the proposals put forward by the company,” said reporter Kevin Rector, a member of the Washington-Baltimore News Guild.

The proposed parking fee, in a lot provided by landlord Kevin Plank’s Sagamore Development, has gotten the attention of Councilman Ryan Dorsey.

He tweeted that charging employees to park would require the Tribune Co. to register under the city’s Commuter Parking Facilities Licensure law and would make it subject to an annual fee and taxes on the revenue.

So far, no one has been charged for parking since the newspaper moved from North Calvert Street to “Sun Park” at Port Covington.

“And they expect us to consider it a raise if they leave that past practice in place?” said a recent Guild statement. “C’mon!”

The cumulative effect of  all of the company’s proposals, according to Rector, is to thwart the union’s efforts “to make sure hardworking employees who deserve a fair shake can stay comfortably in the middle class.”

“These proposals are a slap in the face in a lot of different ways,” Rector said, pointing to the award-winning work produced by the staff of Maryland’s largest daily news operation.

“The Baltimore Sun is committed to providing timely, relevant news to our customers,” said spokesperson Tilden Katz. “We are hopeful we can negotiate a new labor contract, one that meets the needs of readers, staff and the company.”

Last month, Guild unit chair Scott Dance released and responded to a lengthier statement by management about the bargaining over the expired 2007 contract: 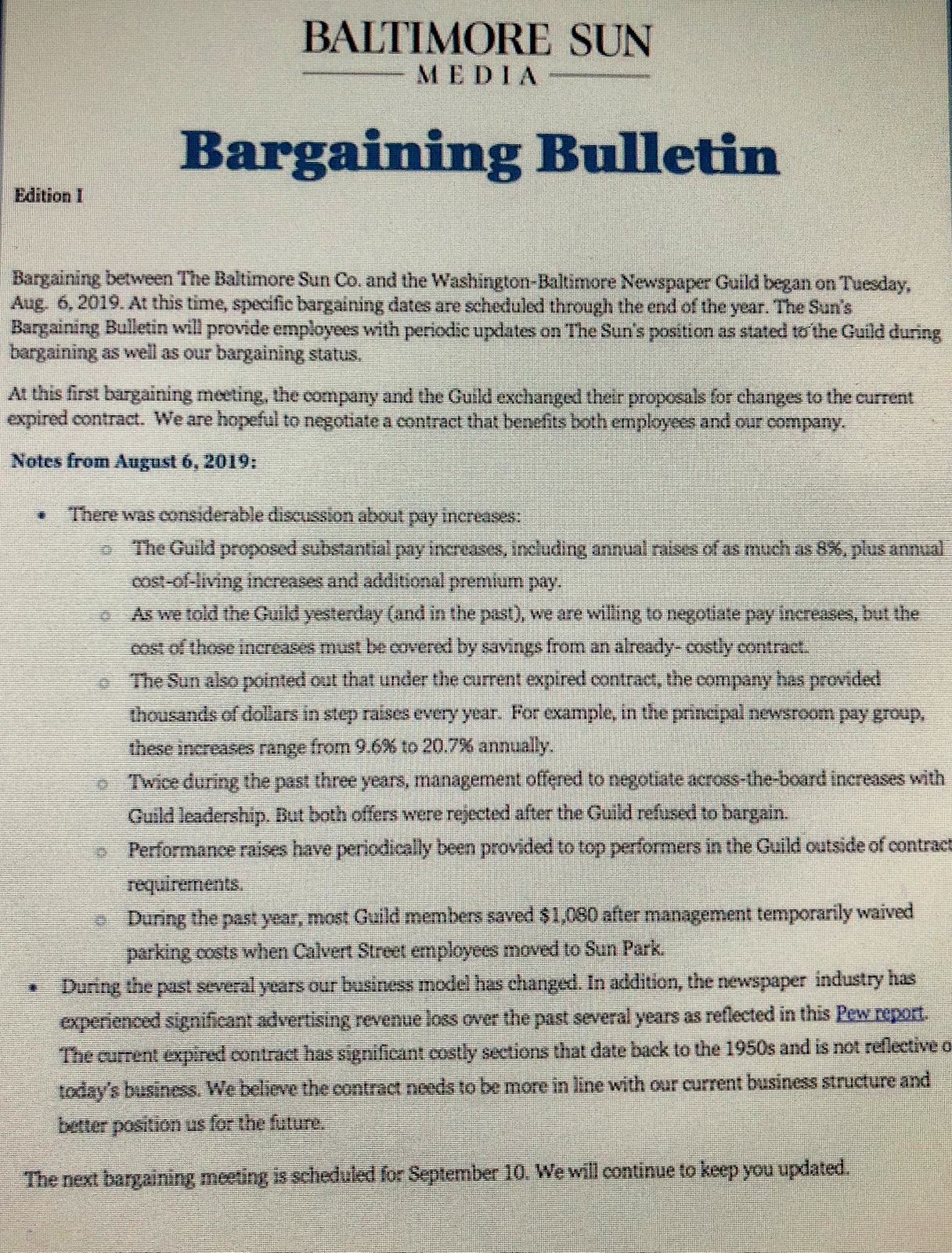 The August statement by Baltimore Sun management about bargaining talks with the Guild. Below: the Guild’s response (@baltsunguild) 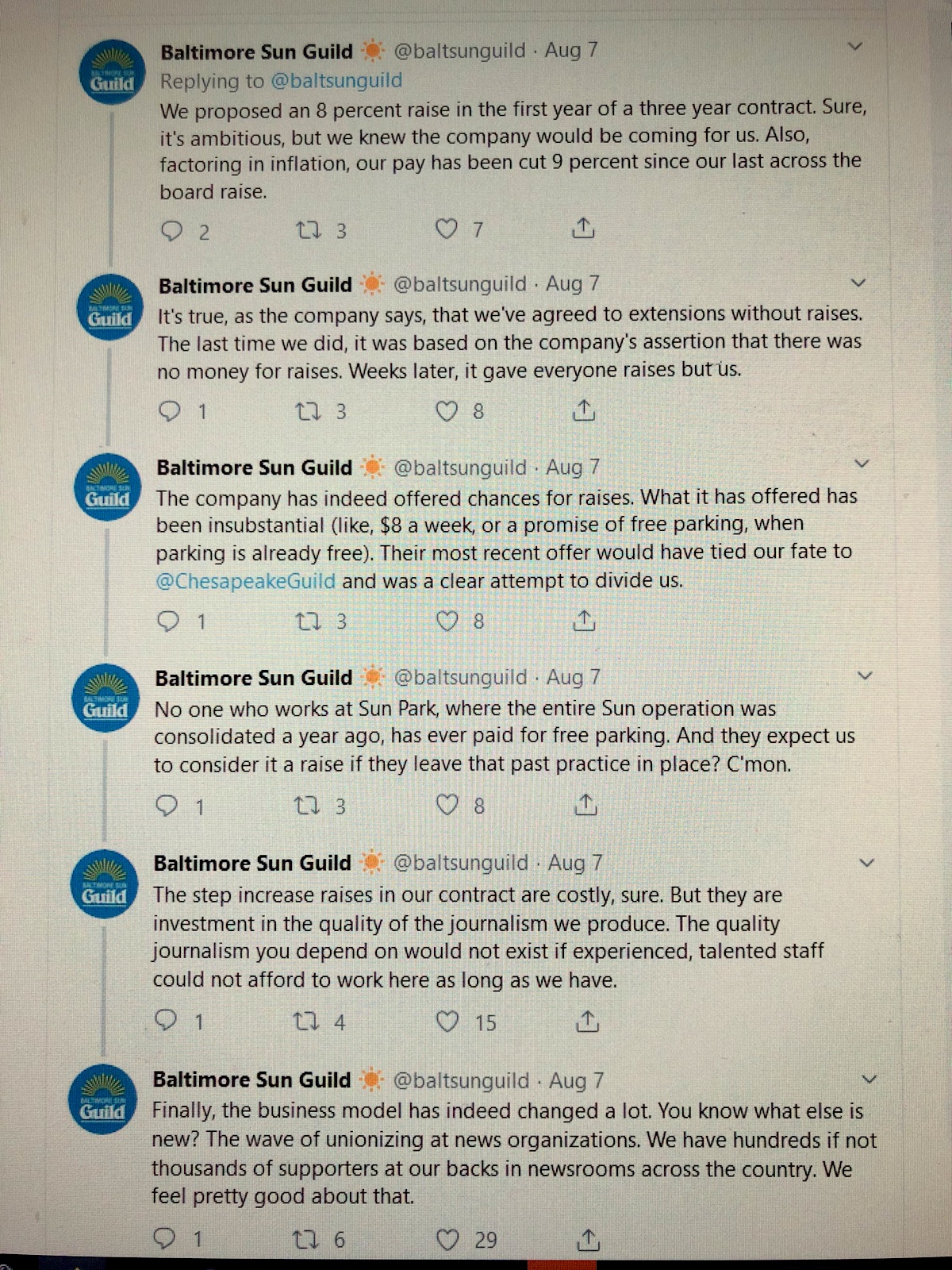 In August, the Guild bargaining committee entered into negotiations on the unit’s proposed first wage increase on its pay scale since 2013. The contract was first signed in 2007 and has been extended several times since.

Rector said the byline strike, launched intentionally on Labor Day, is meant to convey a larger message about what is at stake in the current contract negotiations.

Those anonymous bylines at the tops of stories and in photo captions – “Baltimore Sun staff” – represent people who need to pay their bills, Guild leaders said in announcing the action.

“Imagine what our daily newspaper would look like without these stories.”

Along with the elimination of step increases, other proposed changes include the right to eliminate jobs through outsourcing and the end of seniority.

“We’re going to have reporters with significantly less experience, less institutional knowledge about their beats,” said Rector. “We think this is a vital public interest issue.”

The proposal that the Tribune has put on the table, according to Guild leaders, reserve to management the right to:

• Remove the advertising employees from the Guild, leaving them unprotected.

• Eliminate the requirement of four weeks’ notice before layoffs.

• Move Guild members into different jobs, with the ability to cut pay by 25% for those who cannot perform their new role to managers’ satisfaction.

• Extend the 40-hour work week across six days at the publisher’s discretion.

• Reduce sick leave to five days a year and leave employees trusting that the company will offer short-term disability.

• Lift the cap that prevents health care contributions from going up more than 4% a year.

Some bylines remain on Sun stories, notably those of members of the Chesapeake News Guild, who are barred by management from participating in the strike.

These employees (at the Baltimore Sun Media Group’s community papers including The Capital, The Carroll County Times and others) don’t have a contract with the company and are still trying to negotiate one.

Capital Gazette photojournalist Joshua McKerrow tweeted one of his photos on the printed page with his name blacked out by hand.

“We know you all value news,” he tweeted. “If we are cut to nothing for nothing but greed, we all lose.”