Over the summer, a platoon of student journalists descended on East Baltimore to explore the impact of the planet’s climate crisis on the people who live in the city’s hottest neighborhood: McElderry Park, as it turns out.

Even when it cooled down at night, it remained miserable inside these homes. In one rowhouse, the heat index (a combination of heat and humidity) was 116 degrees – fully 22 degrees higher than the heat index just outside the house.

In many cases, this high heat persisted despite window air conditioners, which many said they only used in upstairs rooms, fearing that putting them on the ground floor might make them vulnerable to break-ins.

At another home – where the reporters found the temperature averaged 99 degrees during a seven-day period in July – a mother was asked why she would not allow her three young sons to play outside in the evening to get a break from the heat.

After first reviewing the grim science documenting a warming planet and increasingly extreme weather patterns, the series drills down on Baltimore to illustrate how urban communities are already suffering disproportionately.

“Code Red: Baltimore’s Climate Divide” is a unique journalistic collaboration of the University of Maryland’s new Howard Center for Investigative Journalism and Capital News Service, along with other partners, including National Public Radio, Wide Angle Youth Media in Baltimore and WMAR television.

Climate change is hitting Baltimore especially hard – and hitting its poor residents of color even harder.

After their year-long review of data on everything from emergency room visits to tree cover – along with street reporting during the hottest July on record – the Code Red team comes away with a highly detailed and rather bleak picture of the city’s climate future.

At present, they found, Baltimore averages six 100-plus days a year. That number, if major steps aren’t taken to head off the climate crisis, is expected to rise to 37 days by 2036.

Multiple data points show how climate change is hitting Baltimore especially hard – and hitting its poor residents of color even harder. Racial and economic disparity was one of the project’s major findings.

Average annual temperatures in Baltimore have gone up more than 3 degrees over the last century. That’s nearly twice as much as the rest of the country.

A mini-tutorial on the urban “heat island” effect, the project identifies the phenomenon as a major source of disparity.

Temperatures are higher in these pavement-heavy, tree-deprived areas – found disproportionately in the same majority-black, historically red-lined East and West-side neighborhoods where residents tend to be poorer, sicker and have shorter life spans.

If McElderry Park was the hottest part of Baltimore, according to 2018 climate data, Dickeyvillle, an affluent pocket of historic homes near Leakin Park, turned out to be the coolest.

(That finding comes from a comparison of temperatures across the city on a single afternoon, conducted by researchers from Portland State University and the Science Museum of Virginia.)

“We wouldn’t need cooling centers if we had healthy neighborhoods,” state Delegate Robbyn Lewis is quoted saying in the piece.

The series, published Monday, examines multiple subject areas: Heat and Inequality, Heat and Health, Heat and Income, The Role of Trees, Heat and Mental Health and Heat and Trees. Each is chock-full of maps, data, photos, interviews and tons of tidbits to engage city residents curious to learn more about how climate impacts daily life.

On hotter days, the students found, the rate of emergency medical calls for psychiatric disorders and drug overdoses goes up. 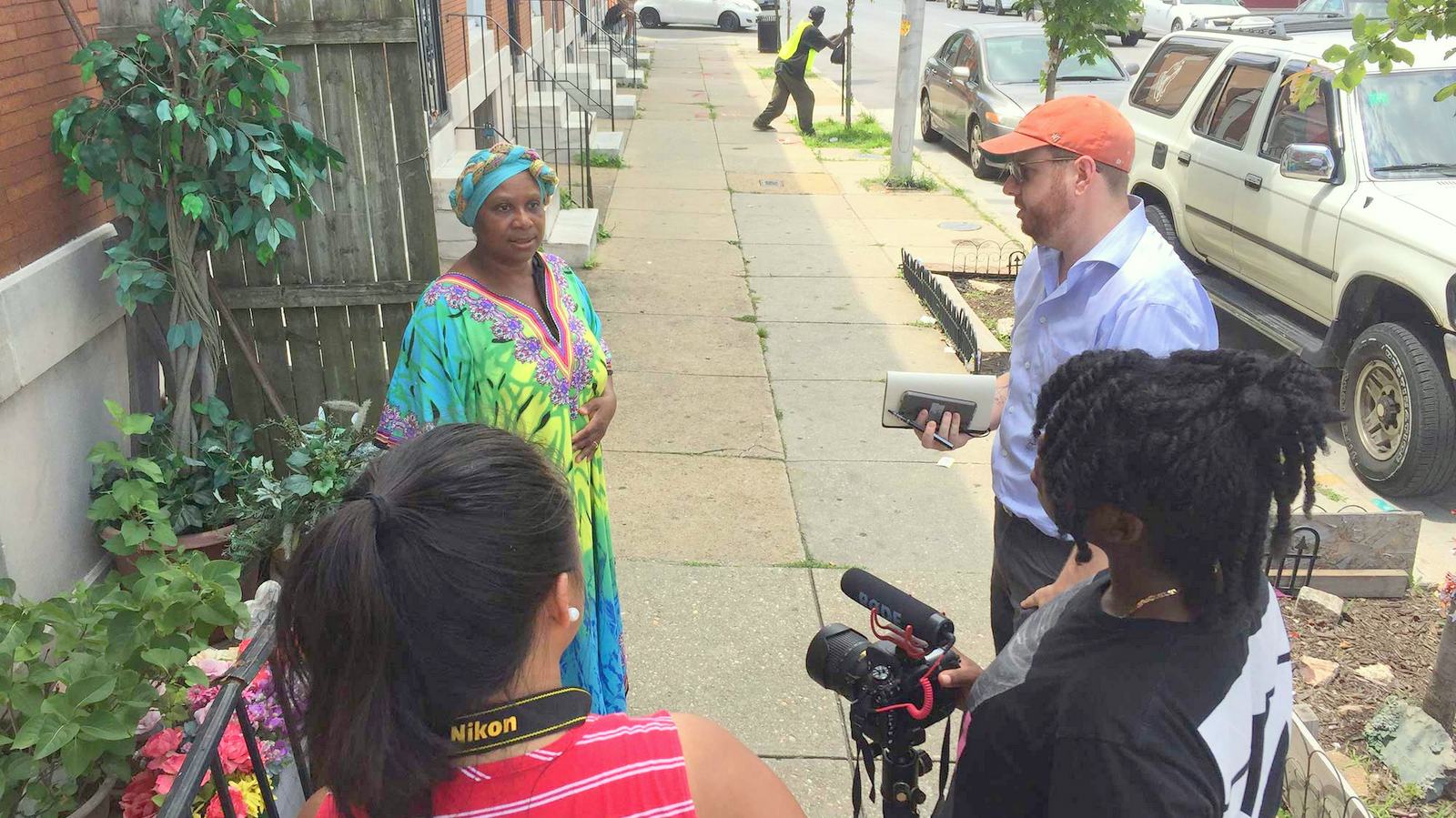 A sidebar in the series spells out what it is about Baltimore rowhouses – the brick, the formstone, the black-tar roof, the lack of windows – that holds heat and makes them so unbearable in hot weather.

City Council members who have pushed for better mass transit and tougher emissions standards for the city’s trash incinerator are recognized in the series. But others come in for criticism.

Mayor Bernard C. “Jack” Young did not respond to repeated requests by the student journalists to explain his comment to a Daily Record reporter – following torrential rain last month that caused severe flooding in Harbor East and Fells Point – that he is not worried about the effect of climate change on waterfront development.

The reporters did speak to City Council President Brandon Scott, who told them that global warming is intertwined with other issues he is concerned about.

But they note that when Scott released his 26 priorities for city government – on a day after temperatures reached 96 degrees – none specifically mentioned climate change.