Circling the wagons to ward off bad publicity and possible legal liability, Baltimore’s Department of Public Works refuses to admit – even to state officials – its responsibility for a recent fish kill in Leakin Park.

“We’re not commenting further at this point,” DPW spokesman Jeffrey Raymond said, declining to answer questions about a broken main that spewed tens of million of gallons of chlorinated water into Dead Run between September 7 and 9.

Nearly 2,000 fish – including 78 mature (and endangered) American eel – were killed by the spill, according to an on-site inspection by the Maryland Department of the Environment.

The dead fish were found along a two-mile stretch of Dead Run below the water pipe that broke under the Ingleside Avenue Bridge in Woodlawn.

The fish were discovered two days after George Farrant, vice president of Friends the Gwynns Falls/Leakin Park, reported to the city that grey water, with a strong odor of chlorine, was rushing into the stream.

“I knew the chlorine could be a real blow to the stream system,” Farrant told The Brew. “After many years, Dead Run was showing signs of life. Now I saw the stream turning dead before my eyes.”

MDE that found chlorine levels of 0.78 mg/L – or eight times above the legal limit for a waterway.

(A 0.78 mg/L chlorine level in water is considered safe for human consumption.) 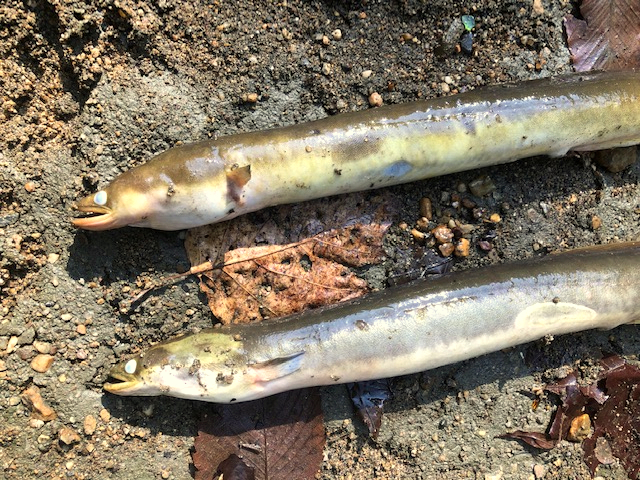 Dead eel were washed up more than a mile from the pipe break (Mark Reutter). BELOW: MDE’s “Kill Information” report.

Violations but no Penalty

MDE cited the city for violating Article 9-342 of the Maryland  Environmental Code for releasing pollutants into a freshwater stream.

Such violations are subject to up to $10,000 a day in civil penalties.

So far, no penalties have been assessed against Baltimore City. The matter “remains under review” by MDE’s compliance office, said spokesman Jay Apperson.

MDE inspection reports and emails reviewed by The Brew show that city officials not only failed to notify the state of the water main break within the specified 24 hours – but waited three more days before responding to phone calls and email requests for information.

This delay was in addition to the two days (September 7 and 8) in which the city failed to respond to Farrant’s complaint of chlorine smells. A 311 operator incorrectly told Farrant that Baltimore County was responsible and should be contacted. 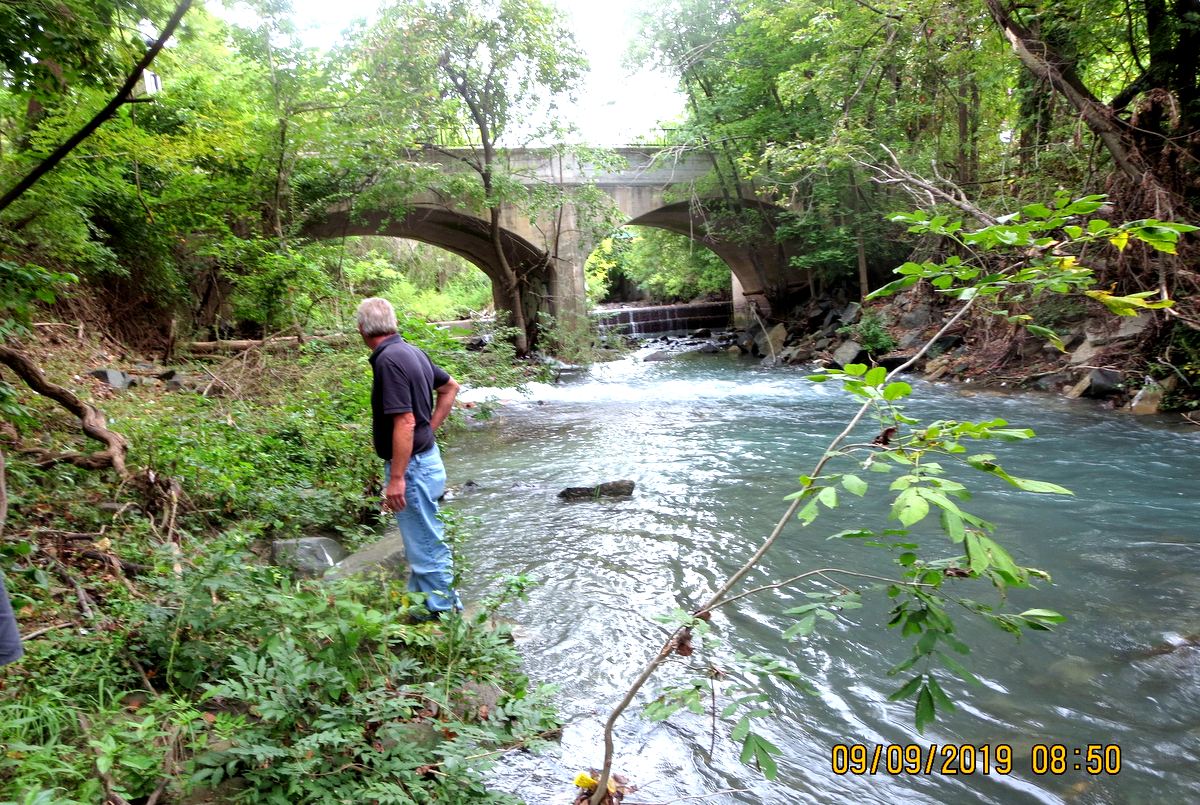 An MDE inspector observes grey chlorinated water rushing into Dead Run from the broken pipe under the Ingleside Avenue Bridge in the background. BELOW: A park volunteer handles a small fish found dead in the creek. (MDE, Mark Reutter) 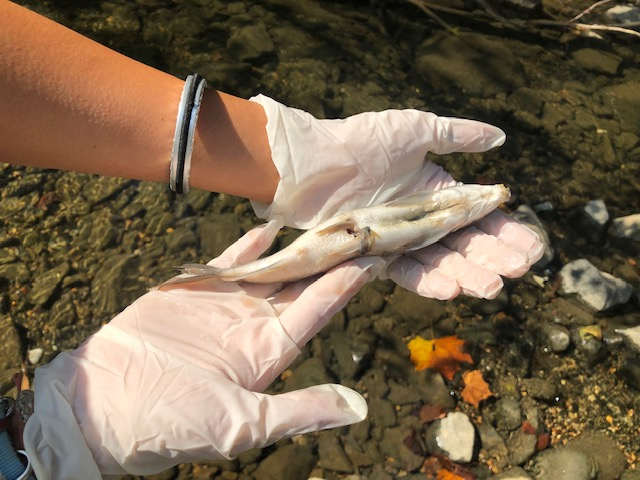 “This line was superfluous”

It was not until September 12 that DPW’s chief legal counsel, Paul De Santis, responded to MDE request for information about the broken pipe.

“The County and City have determined that this line was superfluous and can be abandoned,” he wrote in an email to Sharon E. Talley, chief of MDE’s water compliance enforcement.

Two-and-a-half days passed before DPW shut down the pipe.

De Santis made no mention of the fish kill documented by state inspectors nor did he explain why the city was so slow to respond to the incident. His email was sent at 4:16 p.m.

Two minutes earlier, at 4:14 p.m., DPW spokesman Raymond emailed the same information to The Brew, also brushing aside questions about the dead fish observed in the creek. 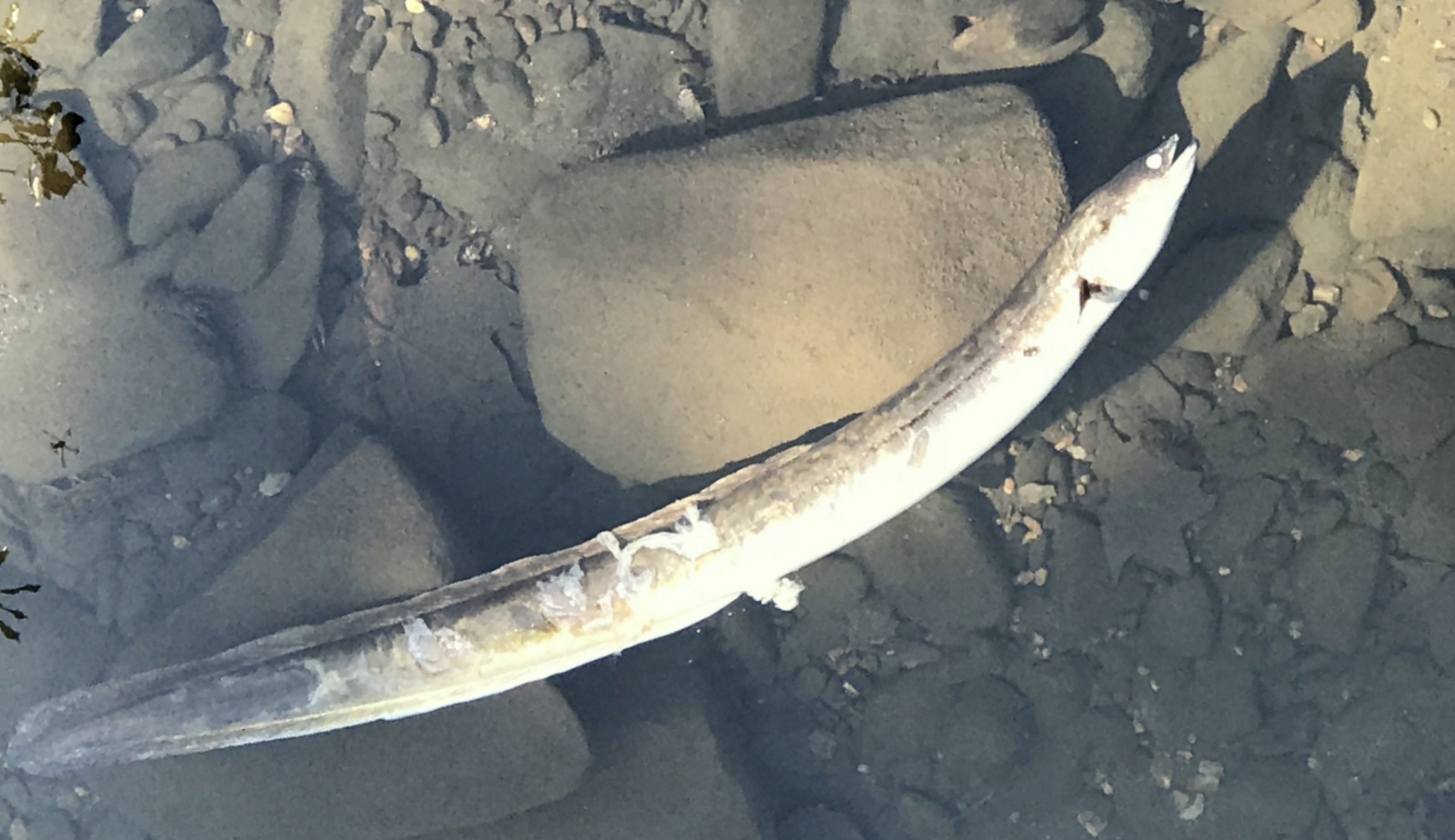 As DPW prepared its response to the state and to The Brew, this decomposing 30-inch-long eel was found floating in Dead Run. (Mark Reutter)

George Farrant described his efforts to get DPW to respond as “worthless.” He said a Baltimore County employee did meet with him on Sunday, September 8, but told him he was not authorized to turn off the valve that would have stopped the chlorinated water flow.

Paul De Santis’ reply to Sharon Talley of MDE (above) and Jeffrey Raymond’s reply to The Brew (below) about the broken pipe. Both avoided mention of the fish kill.

Over the next three days, MDE Inspector Joseph Miller tried in vain to contact DPW by phone and email. “No response from Baltimore City has been returned,” he noted.

Miller was shuffled to various outposts of the DPW’s hierarchy, including to the Office of Asset Management, whose chief, Carlos A. Espinosa, told him responsibility lay not with him, but with “our engineering team.”

A member of the engineering team, Daniel Sullivan, confirmed what Miller already knew – that the broken water main had been turned off – while Espinosa advised Miller, “Moving forward, any questions regarding water main breaks should be addressed to Anthony Galloway.”

“On call 24/7 for responding on site and directing response efforts to water/sewer main breaks, basement back-ups and SSO’s in accordance with the Consent Degree in Baltimore City and proactive storm inlet cleaning and waterway debris removal.”

No such “24/7 response” was made by Galloway or his staff during this incident, according to the MDE reports.

However, it was noted that an employee at the Department of Recreation and Parks, which oversees Leakin Park, was aware that something was wrong at Dead Run as early as Saturday, September 7. 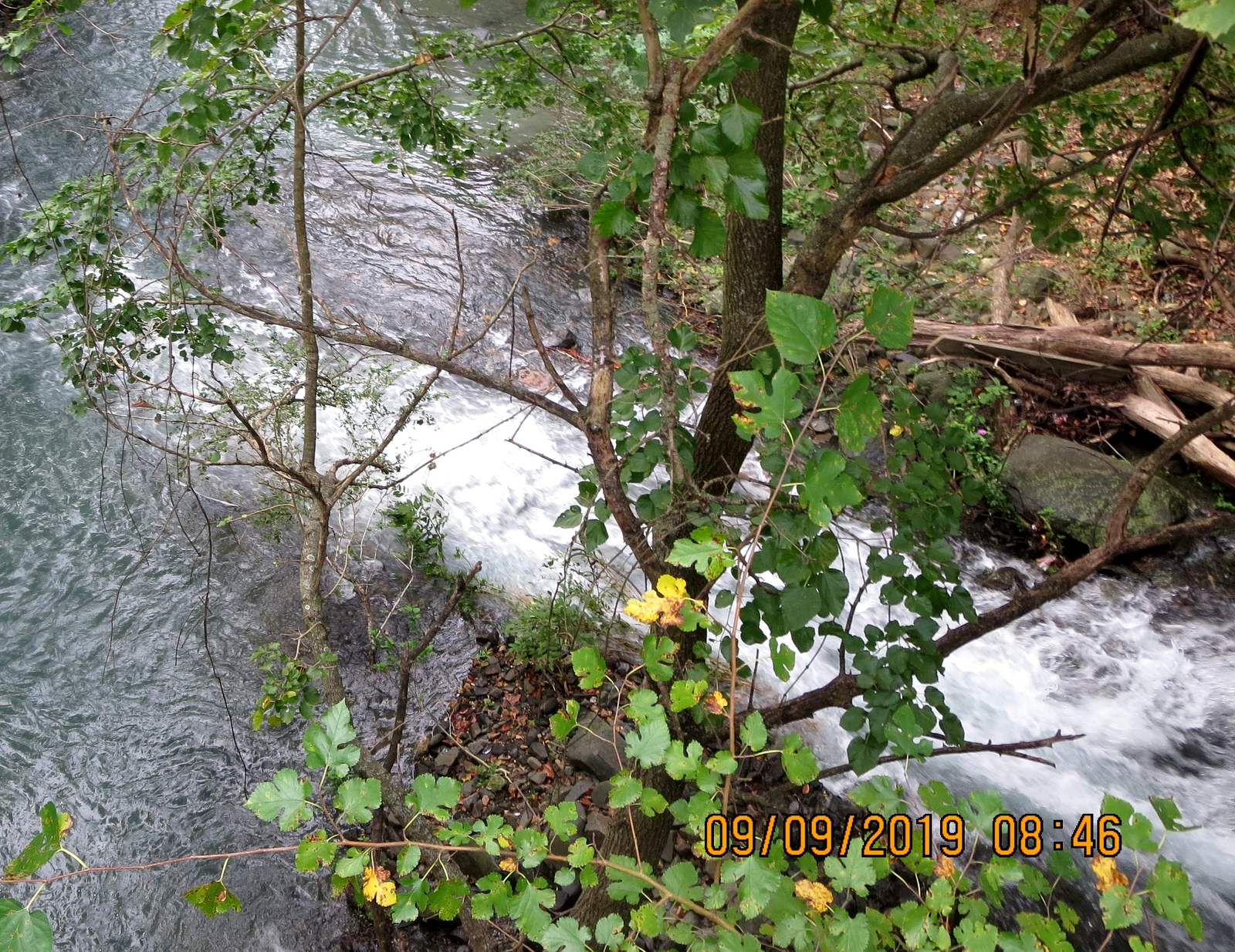