After saying he’d run for his former job as president of the City Council in 2020, Mayor Bernard C. “Jack” Young officially launched his campaign for mayor today.

“Jack changed his mind!” exclaimed Councilwoman Mary Pat Clarke to about 150 well-wishers on the Ynot Lot at the corner of Charles Street and North Avenue.

“He got to this [decision] because he knows how much more he can do to help the people,” Clarke said, before introducing 10-year-old Madison Young, who bashfully introduced her grandfather, a veteran of 23 years of local elected office.

Young, who became mayor six months ago when scandal-ridden Catherine Pugh resigned, spoke in generalities about his vision for Baltimore, saying he will unveil specific proposals in the coming months.

Instead, he mostly lauded his accomplishments as City Council president, a post he held between February 2010 and last May.

It was he, he said, who first called on the U.S. Department of Justice to conduct an investigation of the Baltimore Police Department that found widespread abuses of civil liberties.

It was he who placed body cameras on officers, created a dedicated Children and Youth Fund, and established “equity” as a criteria “in every decision we make as a government.”

Since becoming mayor, he and his team have overcome many difficulties, he said, such as a cyberattack that left major government functions immobilized.

“My team did a workaround to get Baltimore back sooner than anyone thought possible,” he boasted. 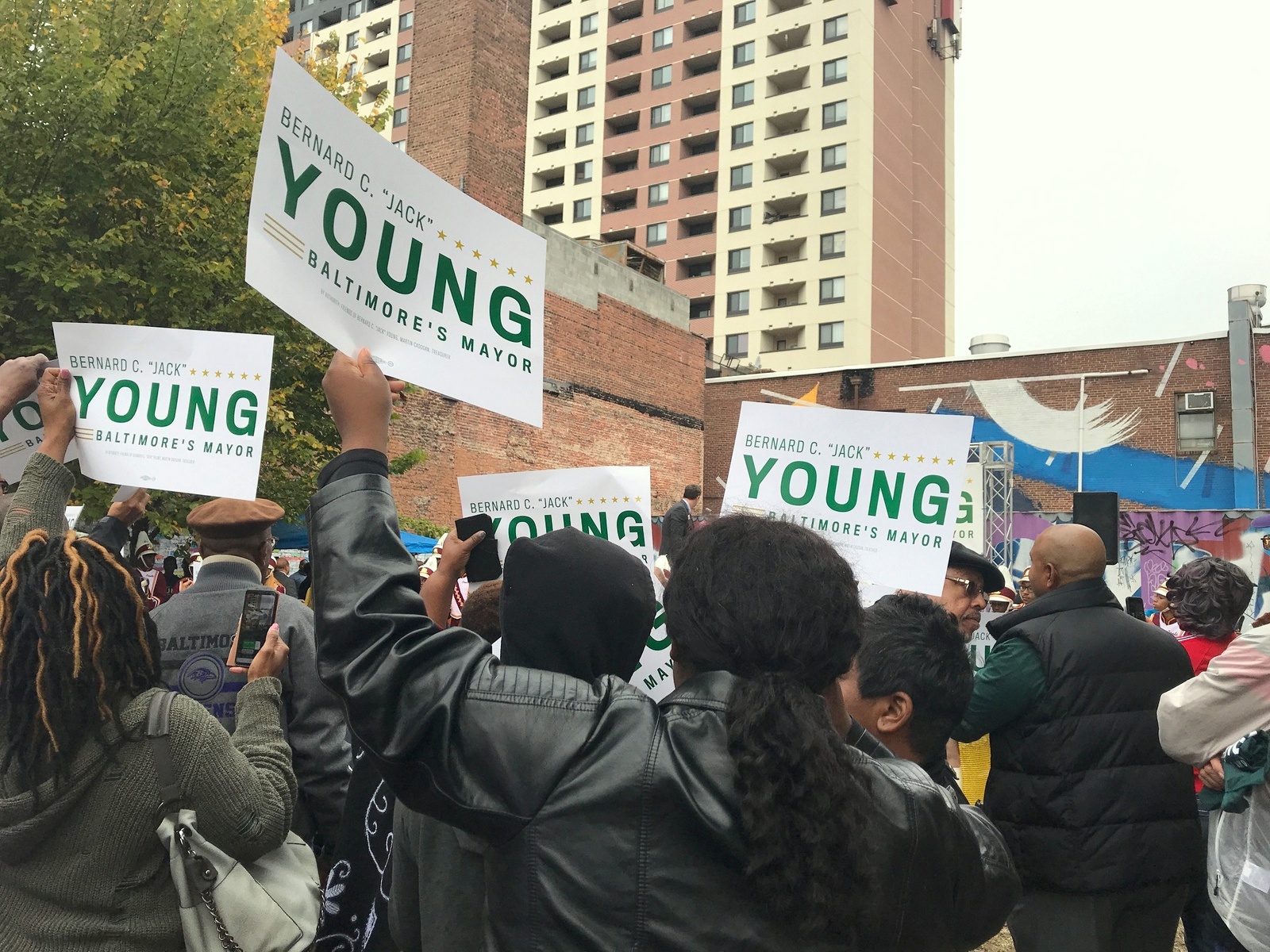 Skirting around the city’s plague of homicides, with the current total (255 fatalities at the end of September) substantially above the 2018 figure, Young said one of his objectives is to make Baltimore “one of the nation’s safest cities.”

“We have to do this together,” he said of the challenges ahead, addressing an applauding crowd as a gentle rain fell. “I can’t do it myself.”

During his four-minute-long speech, he said he wanted to “move Baltimore forward,” adopting the same phase that was used by his predecessor in her 2016 mayoral campaign.

In what appeared to be his most heartfelt moment, Young spoke of his love and respect for Congressman Elijah Cummings, whose funeral yesterday was attended by former presidents Barack Obama and Bill Clinton as well as many other Washington dignitaries.

“As long as I have blood in my body, we’re going to keep his legacy alive,” Young vowed. 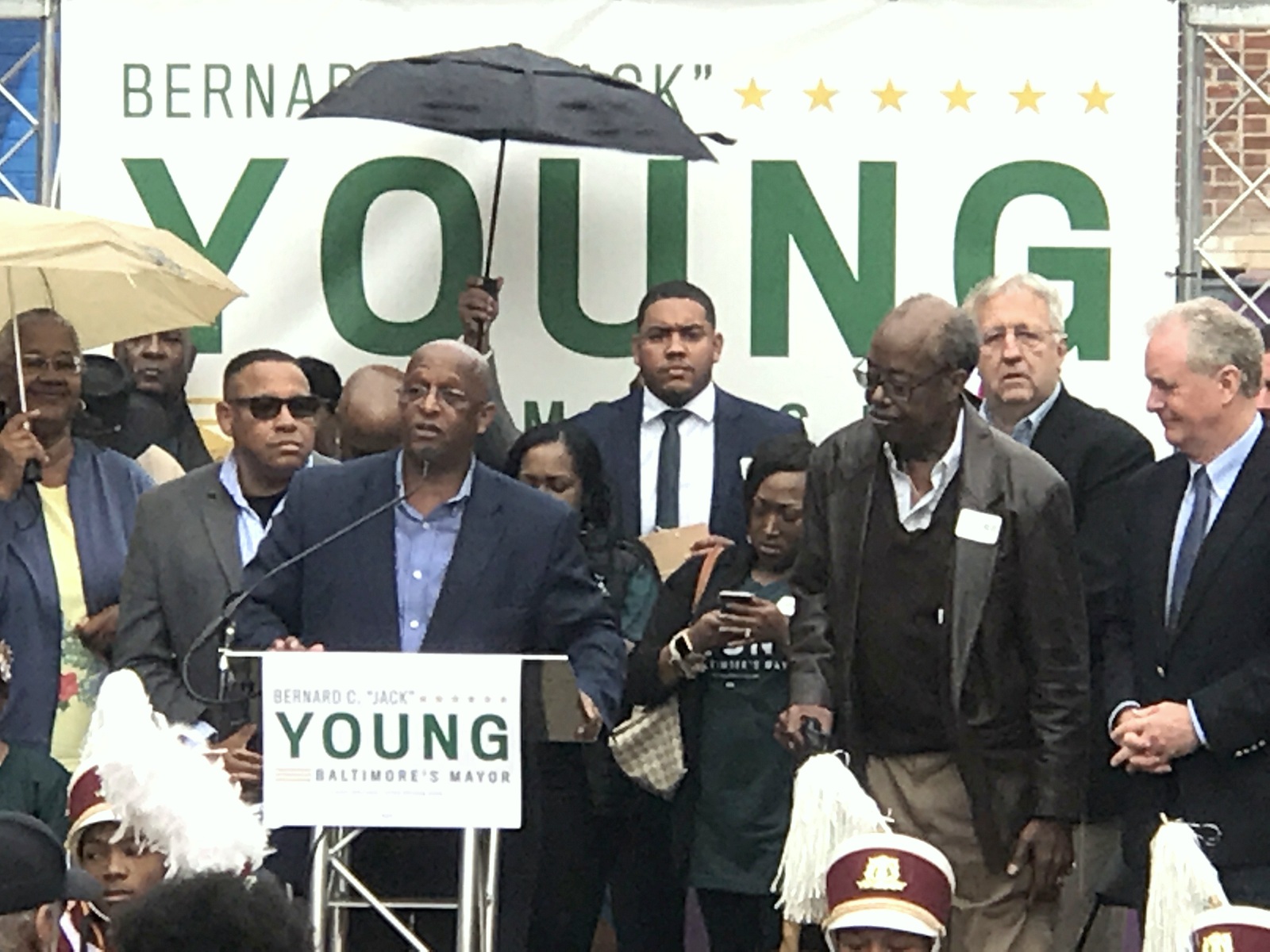 ECHOES OF THE PAST: Several times, Young and his admirers used the 2016 campaign slogan of his predecessor.

“He is a man who will roll up his sleeves to get the job done,” declared Baltimore County Executive Johnny Olszewski.

“Part of it I can’t really explain,” he acknowledged before quickly adding, “It’s a heart thing. . . He’s curious, he’s always asking questions, and he’ll tell you something you don’t want to hear.”

Pittman then lauded Young’s efforts to keep the Pimlico racetrack and Preakness race in Baltimore. 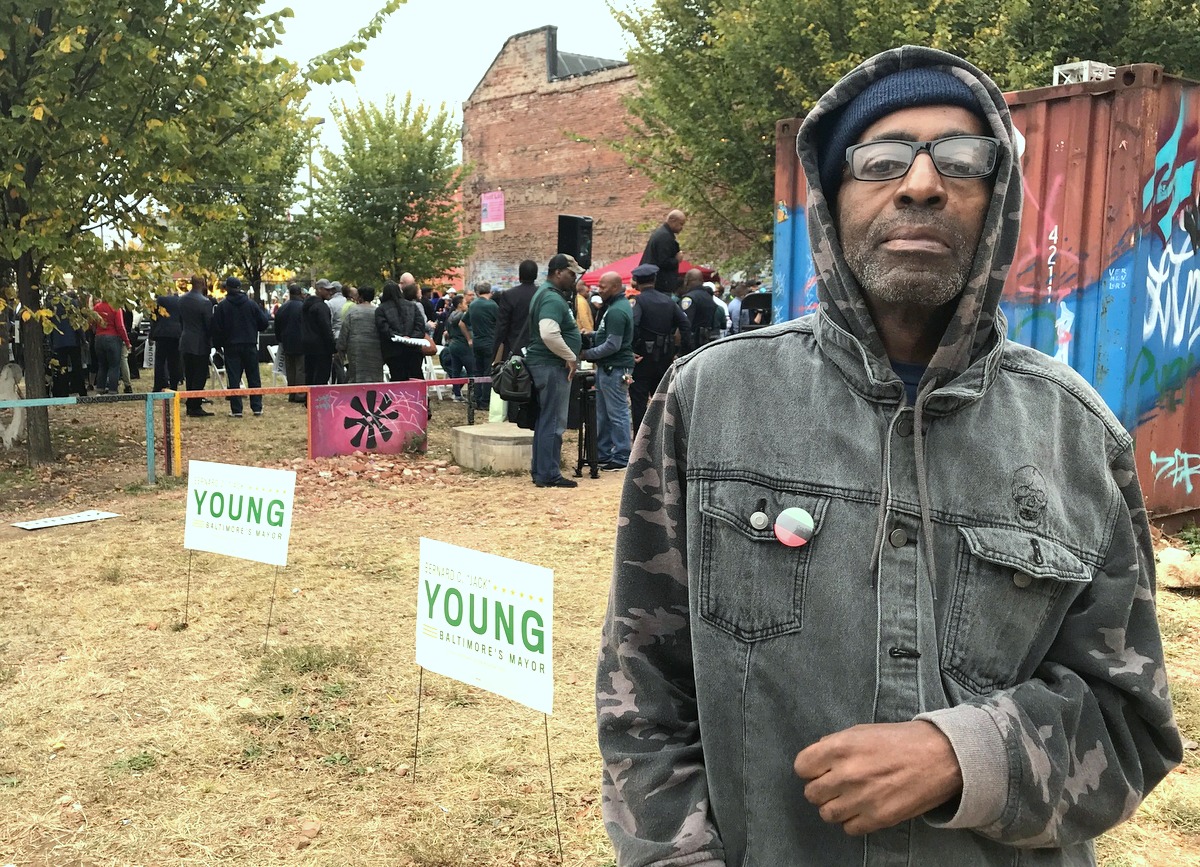 Daniel Griffin said crime is the most pressing issue in Baltimore. (Mark Reutter)

Looking for a Bright Light

Listening to the talk coming over the loudspeaker, Daniel Griffin, a street merchant, said he heard nothing new about the issue that most most affects his well-being.

“Crime. Now what about that?” asked the 62-year-old, who was selling his wares (CDs, cosmetics and clothes) across Charles Street from the campaign kickoff.

“Year by year it gets worse,” he said based on the 13 years he has lived in midtown Baltimore and the six years he has been selling merchandise on the street.

“Is the law being enforced? Not really. Why doesn’t anyone talk about that?”

Griffin said he has no preferred candidate, though that might change if former Mayor Sheila Dixon enters the mayoral race.

“I’m an optimist,” he explained about his outlook on life. “I believe good is gonna happen. It’s been bad for so long, something has to be at the end of the tunnel – a bright light, I hope.”