The church leaders in charge of St. Vincent Park, a longtime refuge for the homeless people of Baltimore, changed their policy in September and stopped letting people stay there “until further notice.”

Asked what life has been like since the park at the corner of Fayette and Front streets closed, several had horror stories.

Some of the homeless lost all of their belongings after the park closed, said Shaq Jones and Dion Phillips, who said they’d spent time in the park. Property was whisked away in a 1-800-GOT-JUNK vehicle.

“They set our clothes on fire,” Phillips recalled. “Then they threw our stuff away in a dump truck.” City workers who came by at one point told them to “go to City Hall to complain.”

Worse than the loss of property were the physical attacks.

More than a dozen homeless people and advocates for the homeless, including Jones and Phillips, held a rally at City Hall on Wednesday and then marched to the park to call for it to be reopened.

They urged Mayor Bernard C. “Jack” Young to better address the needs of homeless people this winter, including women and families who aren’t welcome at shelters that take men only.

To Christina Flowers, one of the protest organizers, the closing of St. Vincent Park is part of a pattern that gives homeless people fewer and fewer places to go.

“What is next when we’ve got organizations closing their doors and closing the establishments and running them away?”asked Flowers, who operates Belvedere Real Care Providers.

Baltimore’s Saint Vincent Park, near the entrance to I-83, was a refuge for homeless people until September. (Ed Gunts)

Unable to stay in the small park enclosed by a black metal fence, some homeless people have moved across East Fayette Street to the base of the Shot Tower.

Because that land is city-owned, police officers do a periodic sweep and make people move on.

Others have scattered elsewhere, including the area around North Avenue and St. Paul Street where two homeless people have been murdered this year.

(One woman was found dead this summer on the porch of St. Mark’s Lutheran Church by the church’s organist who described the grisly sight. Her head was bashed in and blood was running down the church steps. She’d been covered with a blanket to make it look like she was sleeping.)

Most, though, have huddled not far from St. Vincent’s along the Fallsway, where they can get meals at the Our Daily Bread Employment Center and receive medical attention at Health Care for the Homeless.

Leaders of the Catholic church say they closed the park because it was unsafe due to drug activity. Jones said life for the park denizens has gotten considerably worse after it closed.

Young “absolutely has a plan”

Attending at least part of the rally at City Hall were two representatives of Young administration – James Bentley, the mayor’s press secretary, and Jerrianne Anthony, director of the Mayor’s Office of Homeless Services.

Bentley said he got to the rally only in time to hear the end of the remarks, but would report what he heard back to the mayor.

He noted that Young has moved homeless services out of the Mayor’s Office of Human Services and made it an independent agency – a sign of how important he believes its work is. 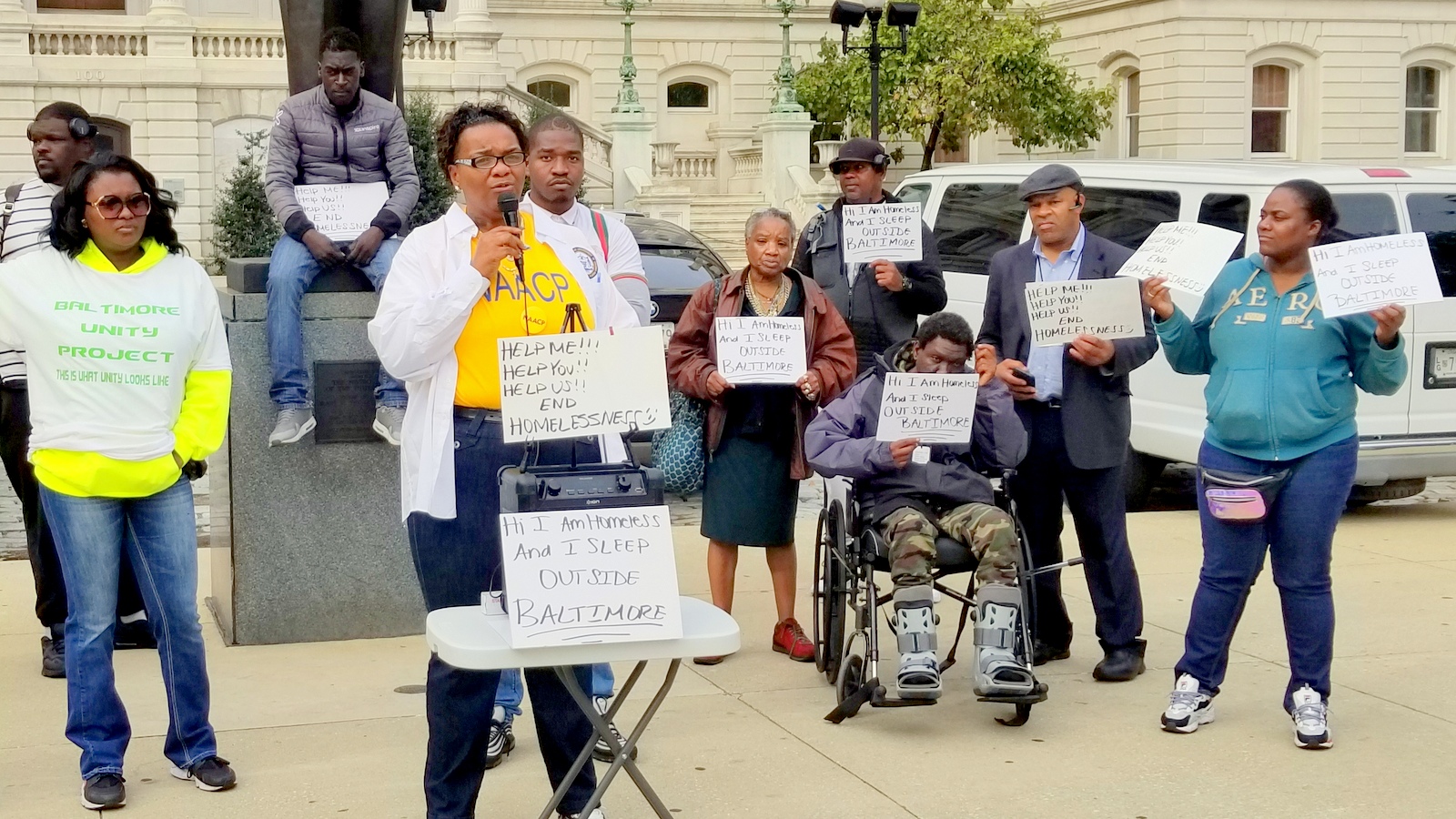 Christina Flowers calls on Baltimore leaders to do more for homeless people as they are pushed out of places like St. Vincent Park. (Ed Gunts)

Anthony said she disagreed with the suggestion that the city doesn’t have a plan to address the needs of homeless people this winter.

The mayor “absolutely has a plan,” she said. In fact, a “five-point plan” for providing temporary shelter and wraparound services for homeless people.

She said the city and other stakeholders meet monthly to discuss issues facing businesses and service providers along the Fallsway corridor, including the plight of homeless.

She said the church has been invited to the meetings but has not sent a representative to date.

A Refuge for Many Years

Located three blocks east of City Hall, St. Vincent Park has been a haven for homeless people since the 1960s.

Under Rev. Richard Lawrence, the church acquired the property from the city in 2000 and let homeless people stay there after dusk, when city-owned parks close.

Last year, parish leaders dedicated a bronze statue, called “Homeless Jesus,” on the grounds to symbolize the church’s commitment to serving the poor.

People were not allowed to keep items in the park for more than 22 hours and build up an encampment. Everyone had to clear out between 7 and 9 am for “cleaning.” Still the place was a relatively safe haven.

This summer, advocates said, just about every bench in the park had someone sleeping on it at night, with even more sleeping on the church’s front steps.

The church’s policy was often questioned by local hotel operators and others who argued that having a large and visible concentration of poor people so close to the Inner Harbor was bad for tourism. 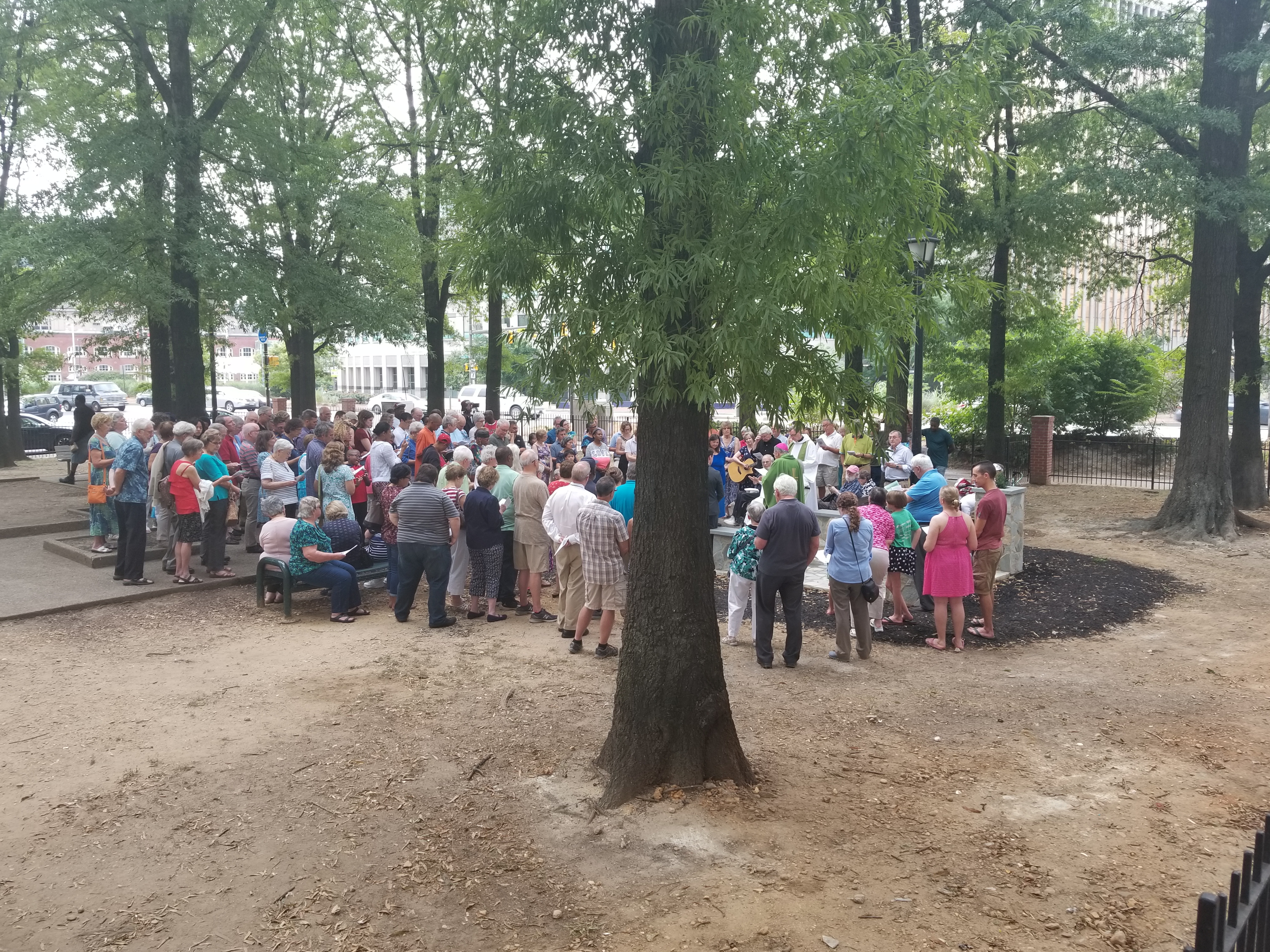 But Lawrence insisted that the park remain open to all.

Last year, parish leaders dedicated a bronze sculpture, called “Homeless Jesus,” on the grounds of the church to symbolize its mission of serving the poor.

But on September 21, the parish – now under Rev. Ray Chase – closed the park, after giving regulars three days notice.

According to Chase and his pastoral associate, Colleen McCahill, the main problem was a spike in drug dealing by outsiders who preyed on the homeless population by selling the cheap and illegal street drug known as K-2 from the church steps.

Some of the people who bought K-2 would go into the park while high, they said, and their aggressive behavior would disrupt and alarm regular park visitors who wanted nothing to do with drugs.

They felt the park no longer served as the quiet haven it was meant to be, and they decided to close it until they could come up with a plan to make it safe again.

When the park was closed, parish leaders said they fully intended to reopen the park, but only after they were satisfied it could be the “peaceful place” it was before the drug dealing got out of control. 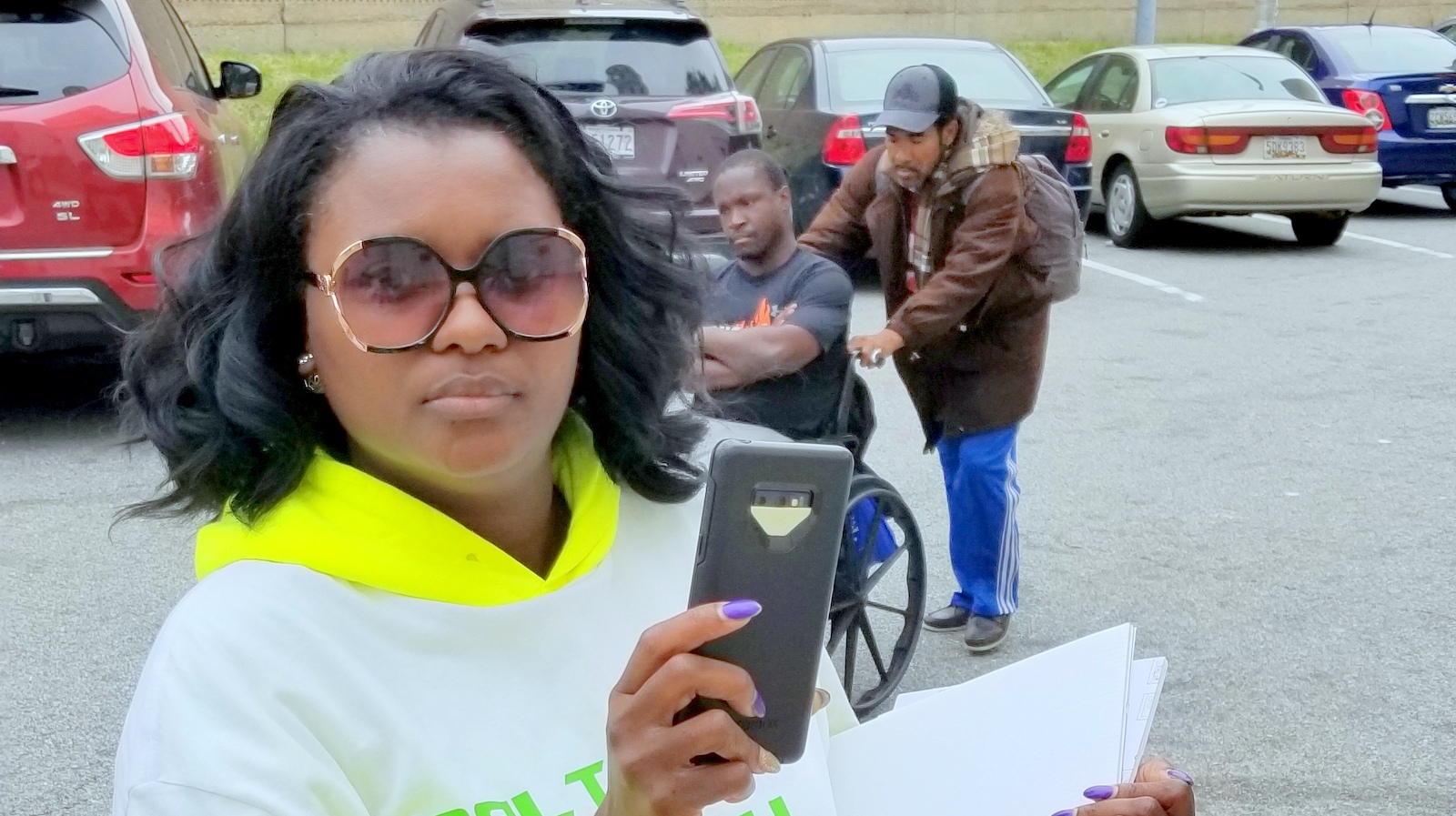 McCahill said the parish is still working toward reopening the park for the homeless, but has no date for when that might happen.

She said she wasn’t aware of the monthly meetings that Anthony mentioned involving Fallsway stakeholders and didn’t know that the parish had been invited to attend.

Adonna Black, a community advocate with the Baltimore Unity Project, said the closing of St. Vincent Park has traumatized those who had counted on it as their last resort.

They’ve gotten “displaced twice,” she said. They’re “already homeless, living in a homeless park. And then they put you out of the homeless park. It’s the lowest of the low. We need someone to care.”