It’s the million-dollar question nobody seems to want to answer: What will happen to the campaign committee funds of Catherine Pugh, who pleaded guilty last week to four counts of tax evasion, fraud and conspiracy?

Those funds, tucked away in a checking account at Harbor Bank of Maryland, were $968,790.35 as of January 16, 2019, the last public reporting date of the ex-mayor’s campaign committee.

The Maryland Board of Elections, U.S. Attorney for Maryland, and State Prosecutor’s office all declined to comment today on the fate of the funds.

“Due to the litigation, we’re not in a position to make a statement,” said Donna J. Duncan, a top aide to Elections Board Administrator Linda Lamone.

Jared DeMarinis, head of the Board’s campaign finance division, was “out of the office and will not be checking messages,” according to his voicemail.

“I am not able to respond,” Marcia Murphy, spokesperson for Maryland U.S. Attorney Robert K. Hur, added today, as did a member of State Prosecutor’s office.

Traditionally, a campaign committee is considered legally separate and distinct from the candidate it bankrolls, which means that campaign funds typically go untouched after an official is convicted.

That was the case with two high-profile convictions: those of Nathaniel T. Oaks and Thomas L. Bromwell.

Both were veteran Maryland legislators who were convicted of bribery and other corruption charges and went to federal prison.

In each case, their campaign committees remained intact – not receiving any new contributions, but also not forced to return contributions, transfer funds to other candidate committees, or donate funds to charitable causes and liquidate.

(The final route was taken by the campaign committee of Kevin Kamenetz, the Baltimore County Executive who died suddenly in office in May 2018.)

The two registered officers of “Committee to Elect Catherine E. Pugh” – chairman Steven J. Sibel and treasurer Eileen Thompson – did not respond to The Brew.

Sibel is a partner at Caves Valley Partners, which has substantial real estate holdings in Baltimore, and Thompson is the wife of Brian D. Thompson, the law partner of Steven D. Silverman, Pugh’s criminal lawyer, who also would not comment today.

The fate of Pugh’s campaign committee is complicated because, unlike the Bromwell and Oaks convictions, Pugh admitted last week that she used more than $35,000 of “Healthy Holly” book money to illegally fund her campaign for mayor in 2016.

Her scheme was to disguise the book receipts – most, if not all of them, “fraudulently obtained” by double selling of “HH” books intended for Baltimore school children – as straw, or fake, donations put in the names of other people.

After the State Prosecutor’s office indicted Brown in January 2017 for election law violations, $18,000 of the laundered “HH” money was diverted to pay for attorneys to represent Brown rather than returned to either the straw donors or the “HH” bank account.

Specifically, the funds went to the law firm of William H. “Billy” Murphy Jr., based on court records and the U.S. Attorney’s statement of facts that Pugh signed as accurate and truthful last week.

The Murphy firm’s lawyers won a probation verdict for Brown in May 2017, even though Brown refused to cooperate with state prosecutors, thereby keeping the true origin of the $18,000 secret.

The 2018 financial report by the Pugh campaign committee continued the fiction that the $18,000 was returned to donors rather than diverted to the Murphy law firm.

Sibel and Thompson attested to the accuracy of the inaccurate January 17, 2018 report to the Elections Board, signing their names below this printed statement:

Under penalty of perjury, we declare that we have examined this report, including the accompanying schedules, and to the best of our knowledge and belief they are complete and accurate.

Election-law violations have a three-year statue of limitations, which means that any potential fine or other penalty assessed against the Pugh committee would have to be filed very soon by the State Prosecutor’s office. 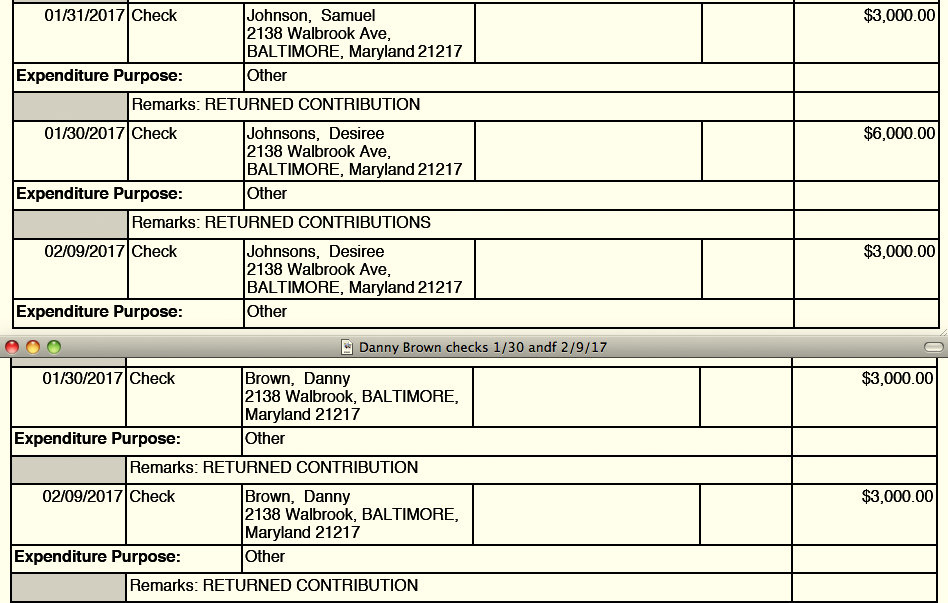 Meanwhile, the U.S. Attorney last week said the government will seek “a sum of money equal to the value of the property obtained by the scheme to defraud, which amount is at least $769,688,” as well as Pugh’s house on Ellamont Road, which was partly purchased by money donated in the name of her “Healthy Holly” books.

How the federal government proposes to extract nearly $800,000 from a 69-year-old who may well be seeing prison time when she is sentenced in February is an open question.

So is whether the feds may try to claw back the Healthy Holly money diverted to her campaign committee.

And, finally, this key question: Who will ultimately determine the disposal of her campaign war chest – Pugh, her committee officers, or the government?