J.P. Grant, whose leasing contracts at City Hall were placed under investigation last week, is set to pick up a fresh $13 million contract tomorrow from the mayor and Board of Estimates.

The contract, disclosed on pages 78 and 79 of this week’s board agenda, involves $18 million worth of Motorola radio equipment for police and other city departments.

Of that amount, $13,117,085.53 is designated to “be financed through the city’s master lease program administered by the Bureau of Treasury Management.”

Left unstated in the agenda (see full text below) is that Grant Capital Management is the “originator,” or middleman, of the $13 million in lease financing.

Based on prior contracts, Grant is slated to get roughly a 1.75% fee for arranging the financing for the lease.

That potentially puts about $230,000 in the hands of the small Columbia-based company with outsized political clout in Baltimore government.

Scott’s request followed reports in The Brew and elsewhere of Grant’s $100,000 payment to help former mayor Catherine Pugh buy a second house in 2016.

Grant’s payment, made in the form of a donation to Pugh’s “Healthy Holly” book company, was revealed in Pugh’s guilty plea on federal tax evasion and conspiracy charges last month.

With ties to City Hall dating back to the Martin O’Malley administration, Grant has been awarded dozens of lucrative leasing contracts.

His company does not finance the purchase of municipal trucks and cars, computers, communications equipment and other items. Instead, it assigns the leases to banks and other financial institutions, picking up a fee in the process.

As of June 2018, his company had originated contracts with outstanding balances totaling $136.8 million, according to the Department of Finance.

Grant did not respond today to a request for comment. Nor did Steve Kraus, the deputy finance director who oversees the Bureau of Treasury Management.

The Motorola master lease was first approved by the Board of Estimates in January 2016, when Baltimore’s current mayor, Bernard C. “Jack” Young, was City Council president. It provided $10 million for Motorola equipment for police and other agencies.

Tomorrow’s agreement amends the agreement to permit “the acquisition of additional system equipment upgrades and replacements required for use with the city’s 800 MHz [911] communications infrastructure for all city agencies,” according to the agenda.

According to the city, “The procurement is of such a nature that no advantage will result in seeking. . . competitive bids.”

The contract did not undergo competitive bidding because “the procurement is of such a nature that no advantage will result in seeking, nor would it be practicable, to obtain competitive bids,” according to the agenda.

(The agreement permits the city to rely exclusively on Grant Capital, with no competitive bids, through January 2026.)

Mayor Young controls three of the five votes on the Board of Estimates; Comptroller Joan M. Pratt and Council President Scott each have a single vote.

While Scott is president of the BOE, the spending items that come before the board are reviewed, approved and placed on the agenda by the mayor’s office. 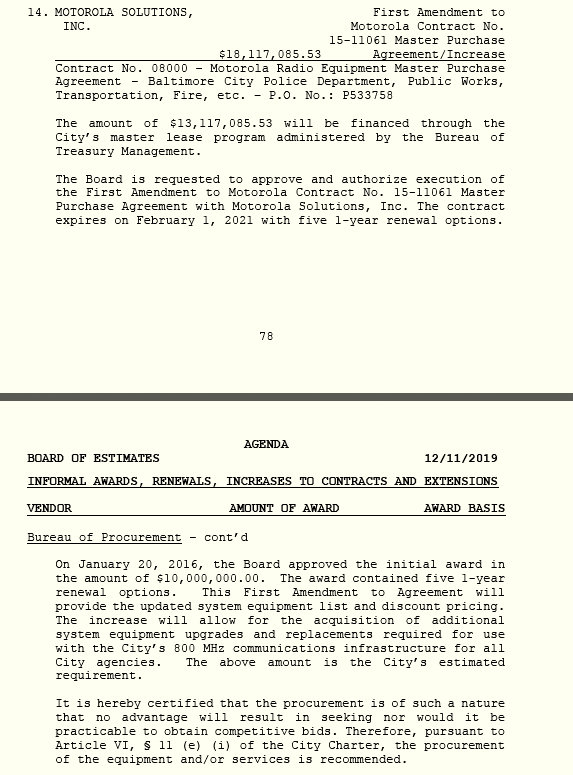