The hold that J.P. Grant has over the Young administration was on vivid display today as the mayor and two appointees pushed through the Board of Estimates an $18 million contract, much of which will directly benefit the Columbia-based leasing mogul.

Faced with Thiru Vignarajah, a former prosecutor and mayoral rival, at a lectern outside of City Hall denouncing the contract and Council President Brandon Scott requesting an investigation of Grant’s contracts, Mayor Bernard C. “Jack” Young was under pressure to justify the expenditure during the BOE’s “pre-meeting.”

(The media is allowed to attend the pre-meeting, which is held before the public meeting in a side room, but few do.)

Before the pre-meeting got underway, City Solicitor Andre Davis and Public Works Director Rudy Chow were summoned into the mayor’s private quarters, together with Finance Director Henry Raymond.

Minutes later, the three men reappeared, accompanied by the mayor.

Scott wanted to defer the Grant contract because of the businessman’s connection with the Healthy Holly scandal of former Mayor Catherine Pugh. But Young quickly steered the conversation away from ethical concerns about the politically-connected businessman.

Instead, the importance of new Motorola radio equipment, to be purchased for the police department through the Grant contract, became the focus of discussion.

“This is a public safety issue,” Raymond chimed in. Seconds later, Davis invoked the federal consent decree and Judge James K. Bredar, saying the police department must have the new equipment to comply with the decree and the judge’s wishes.

“If the allegations do turn out to be accurate, we do have processes to terminate,” Finance Director Raymond reassured.

Raymond also had a ready answer to Scott’s call to defer the contract: “We have processes in place that if the allegations do turn out to be accurate, we do have processes to terminate the agreement and proceed with debarring.”

Scott did not question what processes Raymond was referring to given the near absence of administrative actions historically taken against city contractors who violate the law.

Almost immediately, Capt. Jessica Leitch was brought into the room.

“We are taking parts out of old radios to fix other radios we have,” the police representative said. “We don’t have interoperability with the state right now.”

Asked by Young how important the new radios were for the department, Leitch answered, “Highly important.”

Throughout the exchange, the words “Grant,” “J.P.” or “Grant Capital Management” were never uttered. The same pattern of omission could be found in this week’s board agenda.

The agenda only identified the $18 million expenditure as the “Motorola radio equipment master purchase agreement.” The item was buried on pages 78-79 of the online document. 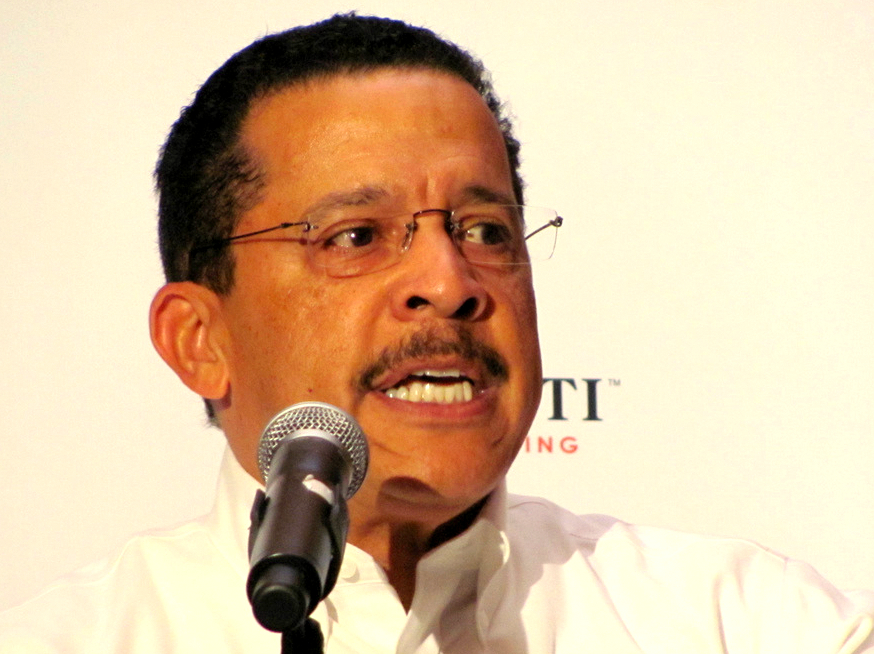 James Preston Grant is the founder, president and CEO of a municipal advisory firm that has more than $135 million in lease purchase contracts with Baltimore City. (Brew file photo)

Yesterday, The Brew exposed the contract as directly benefiting Grant Capital Management, whose founder, president and CEO “donated” $150,000 to Pugh through her Healthy Holly book company.

The contract is among many other single-source contracts between the city and GCM that amount to some $136 million in total equipment leasing, according to the Department of Finance.

The Finance Department has not responded to The Brew’s request for the total monetary value of the city’s contracts with GCM.

But based on the terms of a contract between GCM and the Housing Authority of Baltimore City, today’s contract would yield about $220,000 to the Grant firm, which acts as a middleman and will pass  the actual financing of the Motorola equipment to a larger financial institution.

At today’s BOE meeting, the Grant contract was ratified as one of scores of items that were approved – without comment by the board – as part of the “routine” agenda.

While a closemouthed Scott and Pratt abstained, Young, Davis and Chow approved the expenditure equally silently.

After the meeting, Scott addressed a scrum of TV reporters. “Listen, I didn’t vote for this. . . I was the first person to call for an investigation. This is not just about Mr. Grant. There is much more to that. We have to rebuild our system from top to bottom to gain public trust.” 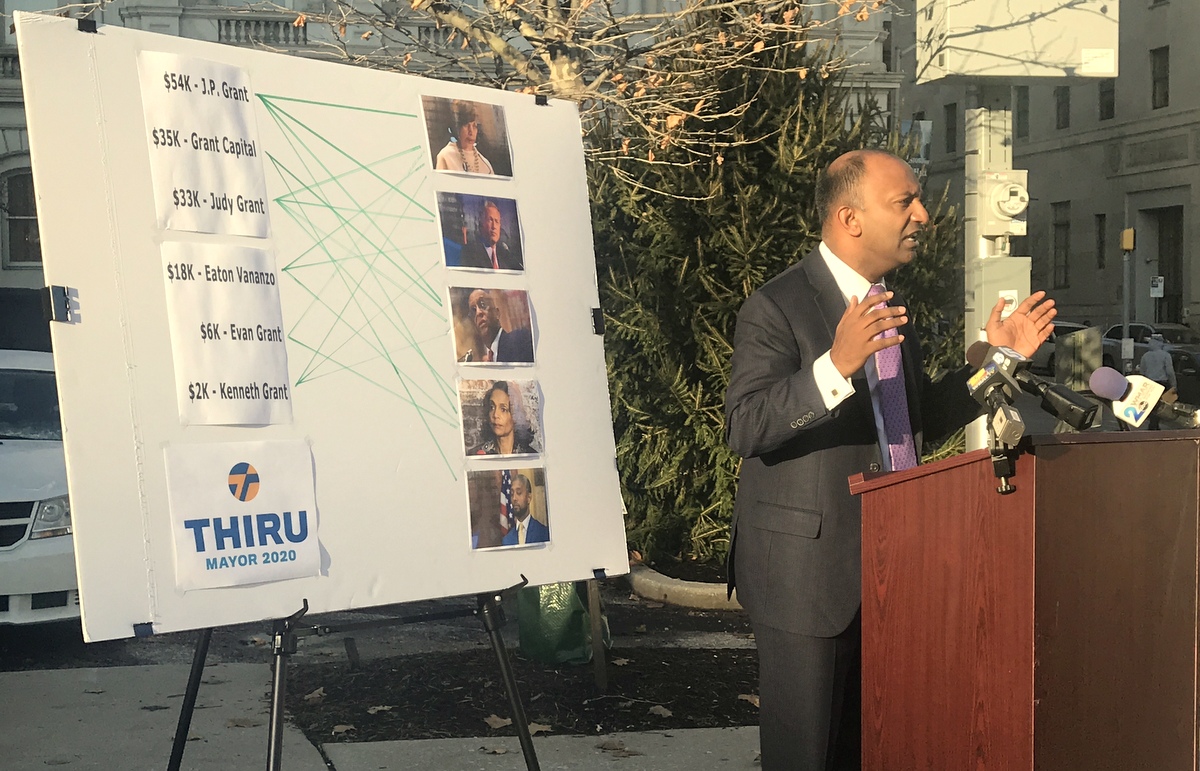 Thiru Vignarajah, a former federal prosecutor who is running for mayor, denounced the Grant contract in front of City Hall. (Mark Reutter)

Earlier outside City Hall, Vignarajah said the board’s approval of the Grant contract would represent “the height of hubris and hypocrisy” by local leaders who had received hundreds of thousands of dollars of contributions from Grant, his leasing company, his staff, his wife and other relatives.

“We now know that Mr. Grant, who many years ago became a middleman master-lease holder, has gotten millions of dollars of taxpayer money. . . When The Baltimore Brew revealed that current city politicians had gotten Grant money, the next day, the Council president and the mayor turned around and feigned an apology and represented that they would give back the donations,” Vignarajah said.

(In fact, Scott returned nearly $5,000 of Grant contributions, while Young has neither returned Grant donations nor called for a review of his contracts, saying through a spokesman that the businessman is still under federal investigation.)

“This week the mayor got caught with his hands in the cookie jar,” said Vignarajah, who is running against Young in the Democratic Party primary in April.

State senator Mary Washington, who is also running for mayor in the primary, had this to say after the board vote:

“City Hall’s shameful approval of a $13 million contract going to a man under investigation is a poignant reminder that our current leadership hasn’t done anything to substantially address massive loopholes, including what kind of contract can go ahead and be approved. Baltimore deserves better.”