If there are enough voters like Dollie Truesdale, the answer would be yes.

Seated prominently near the podium as Dixon announced her 2020 mayoral campaign Saturday, Truesdale explained to The Brew how she sat through every day of Dixon’s 2009 corruption trial, then accompanied her to Our Daily Bread and My Sister’s Place for her court-ordered community service.

“I stuck with her every day,” said Truesdale, owner of God’s Little Cherubs daycare in Northwest Baltimore.

Why, she was asked, should voters return someone to City Hall who committed a crime the last time she was there?

Truesdale replied with a version of what Dixon had just told the gaggle of media and supporters: “Sheila has learned from her mistakes.”

Noting that “we’ve got the crime rate, the grime rate, all of the things that happened in this city,” she said Baltimore needs someone “who can lead the city forward.”

Then without prompting, she added, “I will say that Sheila has to have boundaries.” 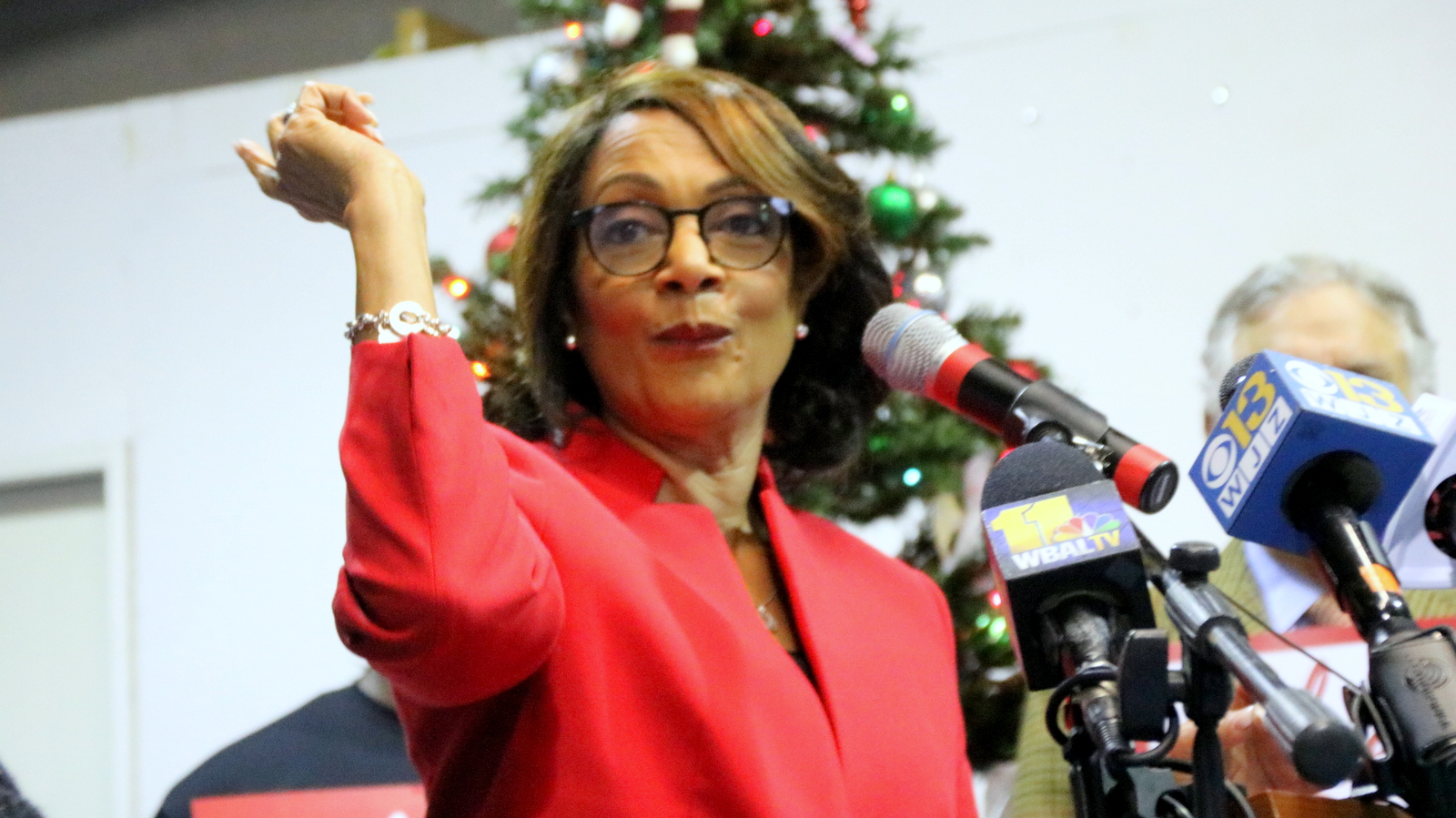 “Redemption makes you even stronger,” Sheila Dixon said at her the kick-off of her latest campaign to recapture her former job. (Fern Shen)

There was little talk of boundaries at Dixon’s announcement. The candidate spoke, instead, of the limitless possibilities for progress if Baltimore would return her to office.

“And even though that mistake happened, it doesn’t define me, and I know that we could get out of what we’re in now,” she said. “And I know if I begin to get back involved in the process of reducing crime and working on so many basic fundamental areas, that we can.”

Dixon held her event in the heart of her West Baltimore turf, at Arthur “Squeaky” Kirk’s community center, a haven for city Democrats who have strayed outside the party mainstream in the past and even flirted with Republicans.

Wearing a jacket in her campaign’s signature red, the 65-year-old Dixon shouted out thanks to longtime supporters, including media figures Hassan Giordano and Doni Glover and local contractors like George Mahoney, of Monumental Paving & Excavating, and P&J Contracting, a demolition company. 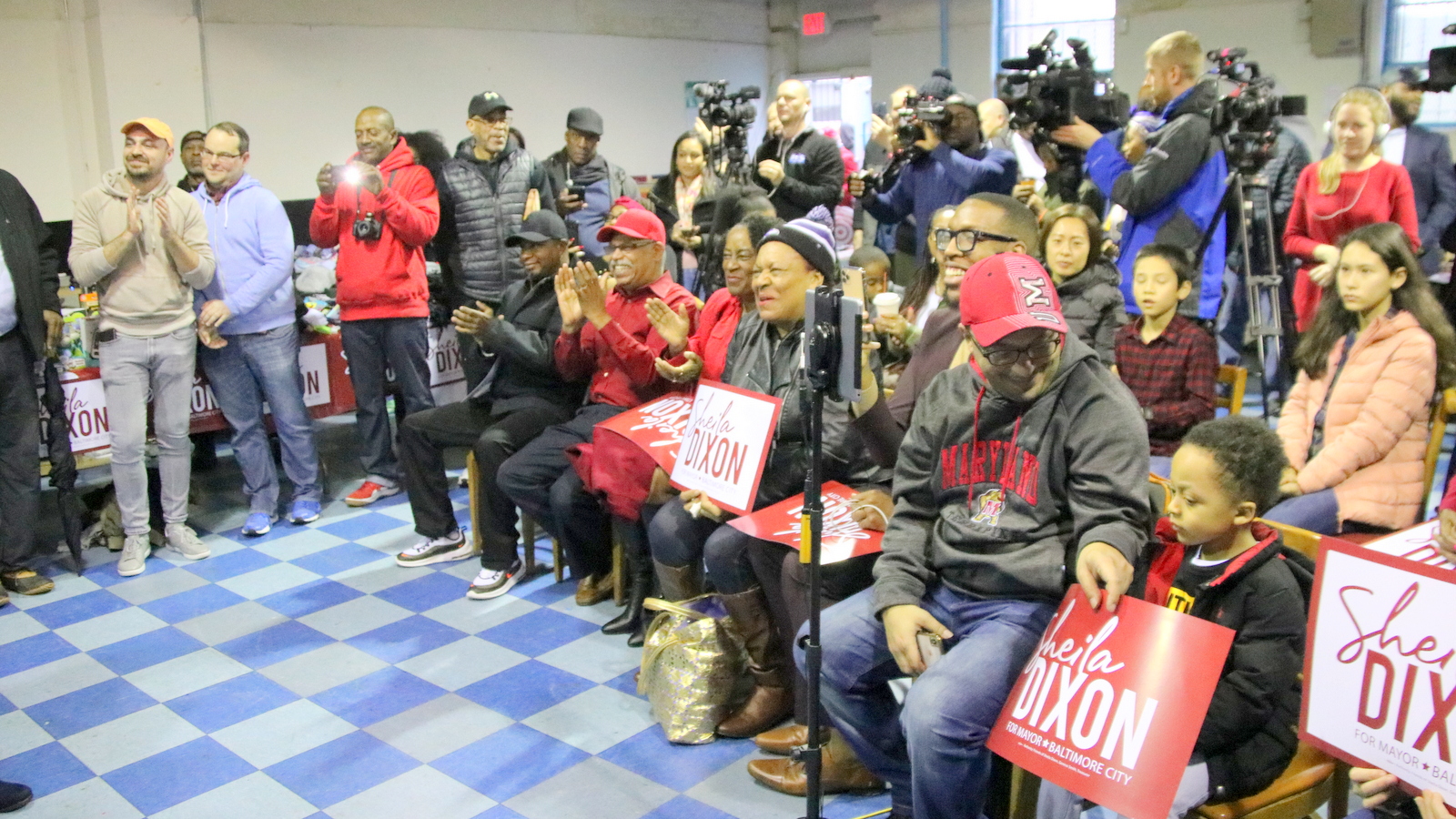 She said she figured out how to respond to those encouraging her after consulting with her family and conducting a poll (“yes, I have my base, but there is a path”).

“After many months of prayers and many considerations, the answer is a surrounding yes!” she said.

As a crowd of about 75 cheered, Dixon noted that a staffer was available to sign people up as volunteers. She promised to return to the rec center next Saturday to participate in its annual Christmas toy and clothing giveaway.

Piled up on tables in the room underneath “Sheila Dixon for Mayor” signs were dolls, scooters, gloves, hats, socks, Batman toys, board games and other items. Outside, a pink food truck dispensed doughnuts and hot cocoa.

The event was billed as a “Cocoa, Coffee and Winter Clothing Drive” and guests were asked to bring donations.

A volunteer explained they would be given away to anyone who showed up at next Saturday’s event. Then he joked to a reporter, “I’m going to pile them in my car and sell them on the street.” 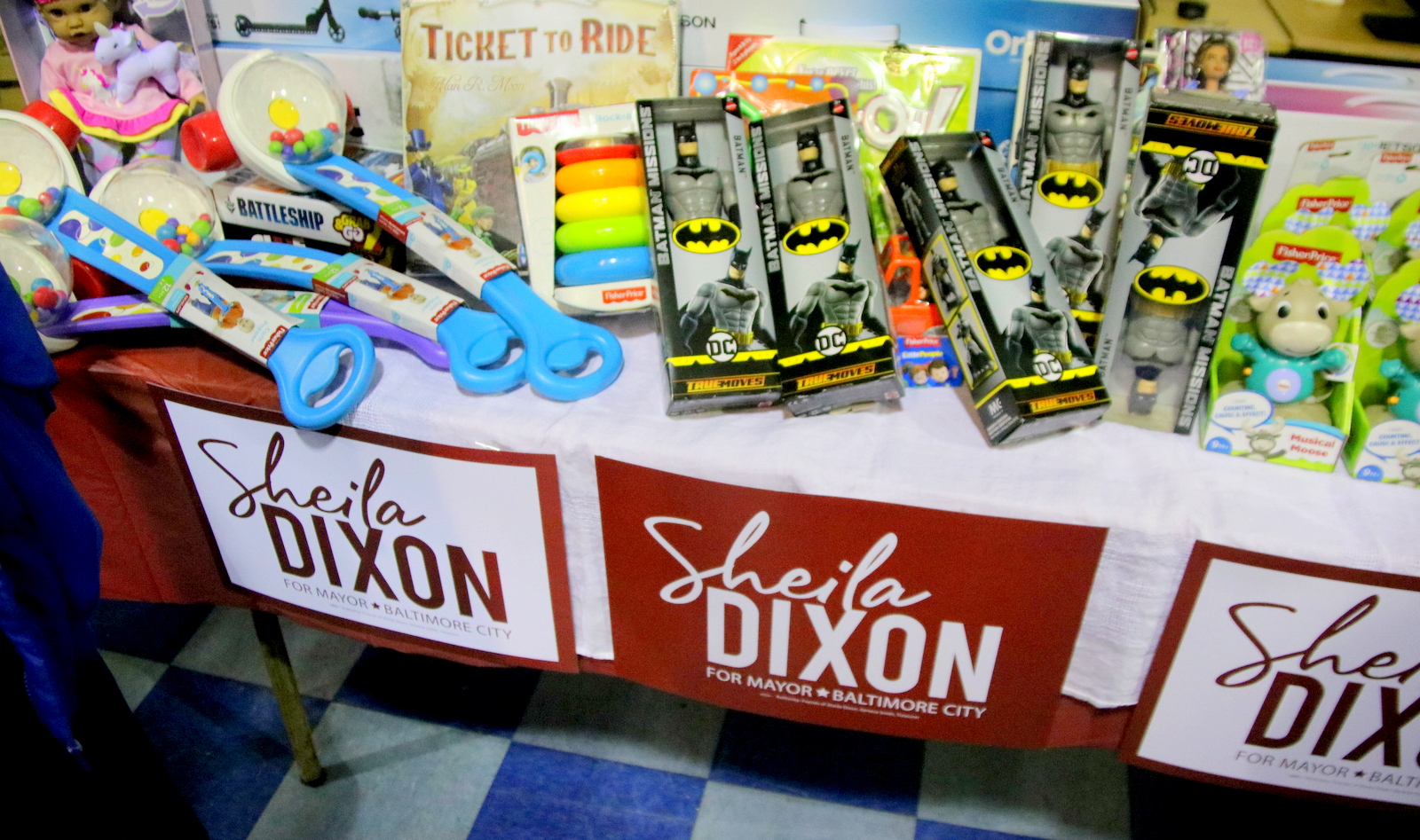 Toys donated by supporters at Sheila Dixon’s campaign announcement are to be given away to children next week. (Fern Shen)

Never spelled out at Saturday’s kickoff was the crime that brought Dixon down a decade ago.

After her trial in 2009, a jury found Dixon guilty of taking gift cards intended for poor children. Prosecutors showed that she solicited the gift cards from a wealthy developer and used them to buy electronics at Best Buy, clothes at Old Navy and other items at Target.

Prosecutors said she failed to disclose presents from her former boyfriend, another developer named Ronald H. Lipscomb, in 2003 and 2004 when she was the president of the City Council. The gifts included furs and shopping spree trips to Chicago, New York and Colorado.

In one case, Dixon and Lipscomb left for New York City by train just hours after she voted to approve a $13.6 million tax break for his Harbor East apartment project.

“I am sorry for the mistakes I made that brought my term to an end,” she said on Saturday, vowing to “work three times as hard” because of them.

Asked what those mistakes were – how she would characterize what she did wrong – her answer was brief: “Failing to disclose a personal relationship.”

How Dixon’s chances stand depends on how one views what has happened since she left office.

Barred for a time from elective office, Dixon ran in the 2016 Democratic primary, losing narrowly to Pugh, in a race she contends the former state senator “stole” from her.

Pugh then faced her own corruption revelations centered around a self-published children’s book scheme in which individuals and companies paid her hundreds of thousand of dollars that she used on her 2016 political campaign, a house purchase and other spending.

If that group splits the vote in the April 28, 2020 primary (the only election that counts in heavily Democratic Baltimore), thereby allowing Dixon to win, Kevin O’Keeffe thinks that would be just fine.

“City government functioned better under her. I feel like she could manage the city and bring the crime down, she knows how it works, she knows the players,” the Baltimore attorney said on Saturday. “She generates a good feeling to a diverse community. People feel a connection to her.”

Asked about Dixon’s corruption trial and resignation, O’Keeffe winced and said, “What other choices do we have? This is not the time for on-the-job training.”