Mayor Bernard C. “Jack” Young tonight promised to return about $1,000 of a homestead tax credit he improperly took for a property he does not live in and said he will register the same property as a non-owner-occupied building.

The mayor’s pledge came hours after The Brew published a story about how Young has gotten thousands of dollars in homestead tax credits by claiming a rowhouse on East Madison Street as his “principal residence.”

The mayor’s spokesman, Lester Davis, said Young would register the property, now occupied by his daughter and her husband, with the city housing department as required by a law that was passed by the City Council when Young was its president.

Earlier today, the mayor’s office suggested that he did not have to register the property because it was not a rental unit.

Davis said the mayor considers the East Madison Street property his family’s “historic home,” even though he and his wife moved out of the building about a year ago so that his newly-wed daughter and husband could “start their family and launch their own lives together.”

Young failed to notify the State Department of Taxation and Assessments (SDAT) that he was no longer an occupant of the building and, therefore, was not eligible for a homestead tax credit.

The Brew posted the mayor’s 2019-20 tax records showing that he got $1,254 in state, city and special tax credits by listing the house as his legal address – and wound up paying only $396.40 in property taxes: 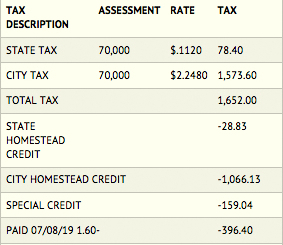 Apparently the $1,254 in credits, or a large portion of it, will be returned to SDAT, according to Davis, who said details of the payback have not yet been worked out.

Mayor’s spokesman: “You may be well-intentioned, but you sometimes don’t cross all your t’s and dot all your i’s.”

Davis blamed the mayor’s failure to update his paperwork with SDAT, the Baltimore City Ethics Board and the Baltimore Housing Department on  “life circumstances,” including the emotional stress of helping his youngest daughter get married and his sudden elevation to mayor following the resignation of Catherine Pugh last May.

“You may be well-intentioned, but you sometimes don’t cross all your t’s and dot all your i’s,” Davis said.

Last Thursday, after WBAL-TV reported that police interviewed the mayor’s daughter, rather than the mayor, when a rock damaged the East Madison Street house, Young took sharp exception to any criticism that he had improperly listed the building.

“That’s my primary residence. . . My daughter is living in my property, and I can stay there anytime I want,” he told Fox 45 News before abruptly ending the interview.

Moving Back and Forth

Tonight Davis said the mayor sees his decision to return the tax credit money as a teaching moment for residents of the city.

“He feels good that he is in a position to be able to be an example for folks. We have a number of  regulations on the books that are very well meaning. But we have to make sure we can walk folks through all the compliance reminders,” Davis said.

Davis said that the mayor and his wife had lived at the East Madison Street address for over 30 years.

This information contradicted Young’s own statements to the media in 2010 that he and his wife lived at a nearby Central Avenue rowhouse that he co-owned with his sister. Young famously took reporters to that house to show them a drawerful of underwear to prove that he lived there.

Since 2010, Young and his wife have moved between the two homes as their daughters grew up and they became empty nesters, according to Davis.

“But for any calendar year prior to this calendar year,” Davis said, “they spent the majority of their time in the Madison Street property,” adding that rumors that the Youngs lived outside of city boundaries were false and malicious.