Arcane details of Baltimore zoning law, a debate over traffic control vs. affordable housing, allegations of City Hall influence buying by a developer – all of these issues swirled in 2017 around a proposed 80-foot-tall apartment building in north Baltimore.

When a judge last week reversed the City Council’s approval of a bill to allow “The Overlook at Roland Park” project to move forward, his 117-page decision touched on them all.

For example, he noted what happened after 3rd District Councilman Ryan Dorsey prefaced his vote with a critique of the “extremely excessive number of parking spaces planned” and the high cost to rent the units.

A key issue was whether the proposed building, to be built near the intersection of Falls Road and Northern Parkway, would be subject to 80-foot-height restrictions under the old zoning code or to the 35-foot limit under the new TransForm Baltimore zoning code.

The project came under the new code’s stricter height limit, Fletcher-Hill concluded, throwing out the Planned Unit Development (PUD) approved on June 19, 2017 by the City Council. (All Council members voted “yes” save for Mary Pat Clarke, who abstained because her daughter lives in one of the nearby neighborhoods.)

“The City Council erred as a matter of law, based on the erroneous recommendations of the City Law Department and Planning Department, in assessing the PUD application as if the developer continued to have a right to build an 80-foot structure,” Fletcher-Hill wrote in an opinion released last Friday.

The developer, Blue Ocean Realty, and its principal, Jonathan Ehrenfeld, had argued that its application met the criteria to be grandfathered in under the old zoning code.

Calling the Council’s fact-finding “insufficient” and a good reason to throw out the decision “even if there were no other errors,”  Fletcher-Hill had withering observations about the process that local decisionmakers followed in approving the project.

“Pure boilerplate,” Fletcher-Hill called the document that the Council’s Land Use Committee cited to approve the project.

He noted that the Planning Commission green-lighted it before the traffic analysis was completed and that the Council’s Land Use and Transportation Committee took its vote without considering detailed testimony by the opponents’ expert and “binders” full of material.

“Pure boilerplate,” Fletcher-Hill wrote, of the two-page “Finding of Fact” the committee cited as it voted to approve the project.

Asked by the committee if the Overlook project would be built at “the worst intersection in Baltimore,” a Transportation Department representative was unable to answer.

Chairman Edward Reisinger then asked DOT to provide a chart with the data in a few days, which led Fletcher-Hill to marvel at “the notion of leaving the record open for additional evidence but then voting on the findings at the end of the hearing.” 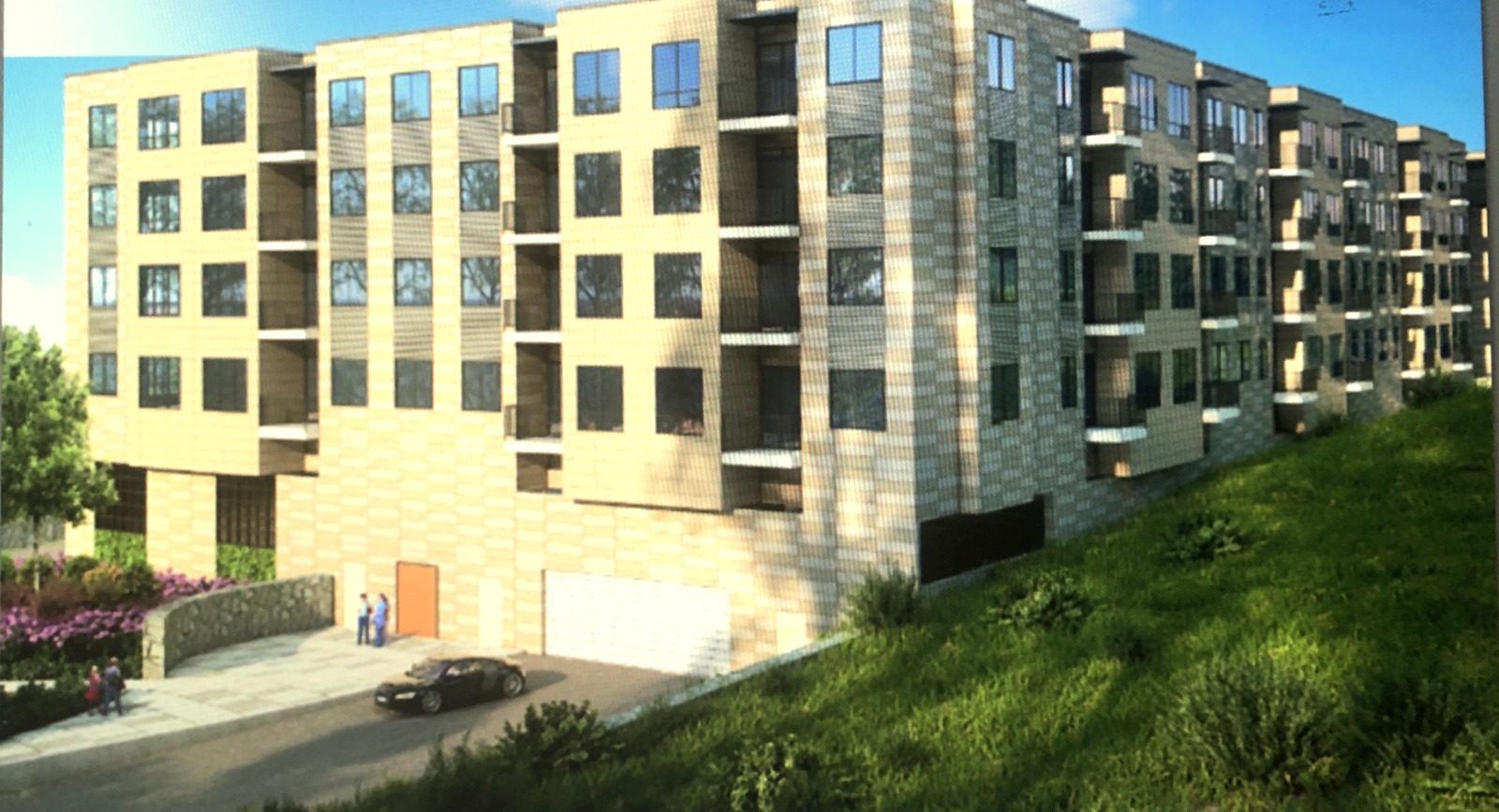 A sketch of the proposed 148-unit “Overlook” project on a hill above Falls Road and Northern Parkway. (Blue Ocean)

The case before the judge was formed by the consolidation of three lawsuits brought by individuals and organizations, including property owners Hunter and Margaret Cochrane, the Lehr Stream Association, Roland Park Civic League and Mattfeldt Community Association.

Opponents charged that the intersection, located near an I-83 entrance ramp, could not handle more traffic and that such a tall structure, located on top of a hill, would be out-of-character with the neighborhood.

The 148-unit apartment “would be an absolute eyesore,” attorney Shale D. Stiller said.

Fletcher-Hill’s ruling walks though the history of the project, proposed to be built above Belvedere Towers, now known as The Falls at Roland Park.

He concluded the project missed key deadlines under the city’s “Transform” zoning overhaul, which took effect at the start of June 2017.

“The Developer in this case did not submit any building permit application for this property as of June 5, 2017, much less a complete application,” the judge wrote.

The project opponents criticized not only timing and procedural deficiencies, but also the degree to which lawmakers followed the City Hall tradition of “councilmanic courtesy.”

The term refers to a practice that comes into play when a project that only affects one council district is voted on by the full body. The Council follows the advice of the member of the affected district and will typically vote “yea” based on the recommendation made by that member.

The role of councilmanic courtesy is usually subtle, but in this case Councilwoman Sharon Middleton announced it explicitly.

“Ordinarily, the extent of the deference a councilmember gives to the position of the sponsoring councilmember may be subtle. Here, Councilmember [Sharon Greene] Middleton announced it explicitly,” the judge noted, quoting Middleton as saying:

The judge, however, ultimately backed away from assessing the impact of councilmanic courtesy on the vote.

“Because the Court is reversing the decision on other grounds, the Court declines to decide in isolation whether this record requires reversal on the ground that the Committee’s decision was improperly affected by councilmanic courtesy,” he wrote. 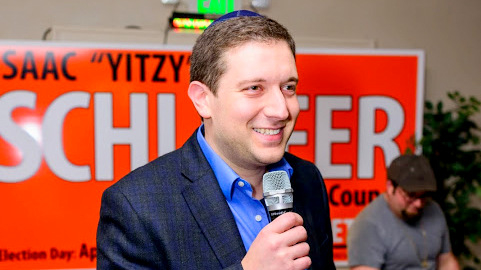 ABOVE: Overlook developer Jon Ehrenfeld speaks at a Yitzy Schleifer fundraiser in 2016. BELOW: Schleifer speaks in favor of the Overlook project in 2017. (Facebook, Fern Shen) 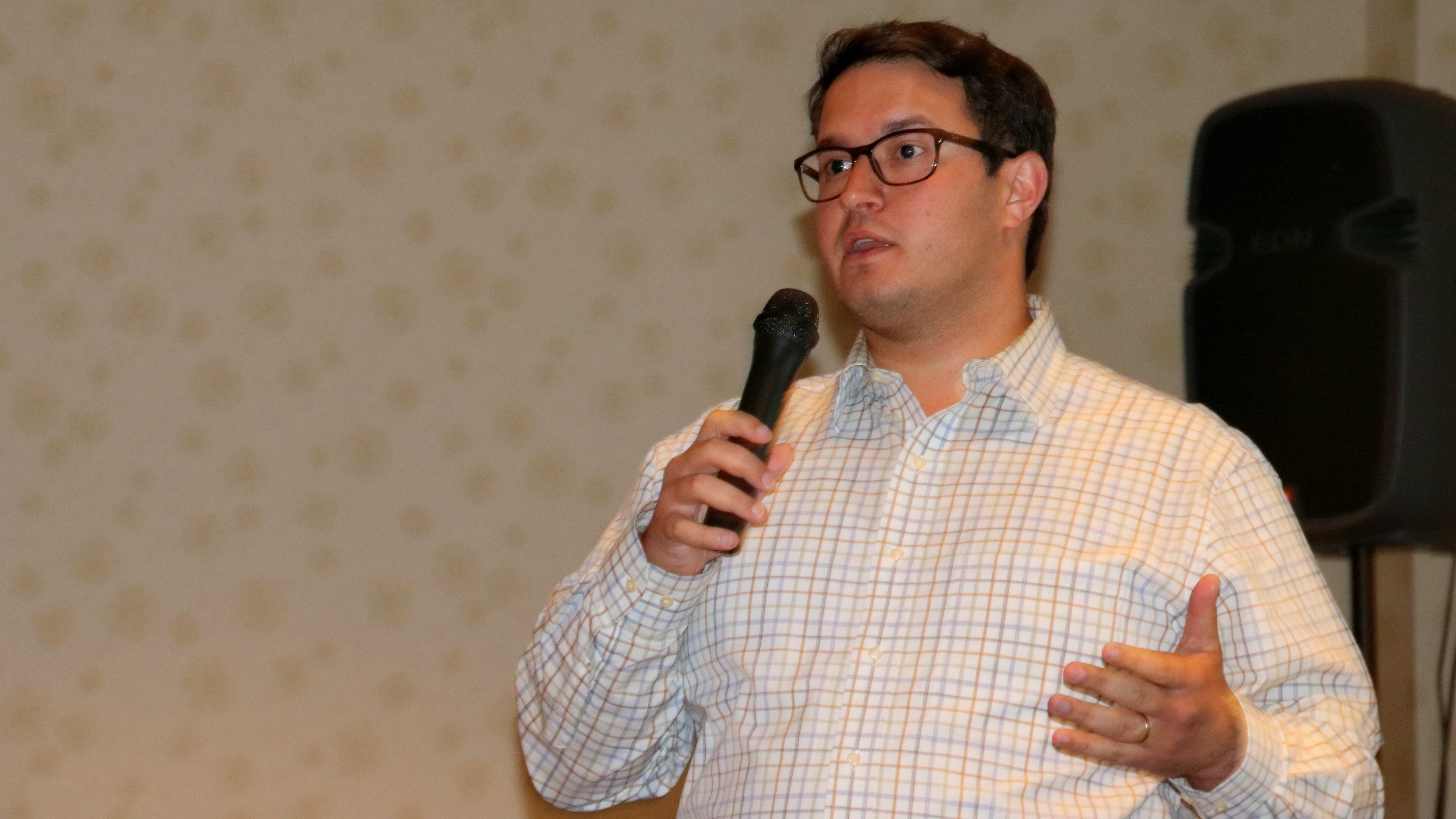 What about the petitioners’ contention that the proceeding was tainted by the influence that developer Ehrenfeld exercised over Councilman Isaac “Yitzy” Schleifer, in whose 5th District the project was proposed?

“The entire proceeding reflects the rubber stamping of one councilman’s support of a development proposed by the most significant sponsor, fundraiser and financial contributor to his campaign,” the opponents argued.

But the opponents “offered no specific factual foundation for any allegation of impropriety,” Fletcher-Hill wrote.

The judge, however, faulted the Planning Department’s position that the project fit with an objective of the city’s Master Plan “to strategically redevelop vacant properties throughout the city.”

The undeveloped wooded parcel “cannot conceivably be regarded as contributing to the city’s vacant and abandoned housing problem,” Fletcher-Hill wrote.

“If anything,” he said, “the objectives of the City Master Plan more apt for this proposed project are those that relate to open space.”

Back to City Council

In sending the project back to the City Council for possible reconsideration, Fletcher-Hill charted a path that Blue Ocean would have to follow to succeed.

Namely, that it would have to successfully argue that a building twice the allowable height of the TransForm code was justifiable to meet a competing public need, such as more housing.

Blue Ocean did not respond to Brew questions about its future plans for the site.