Turnout was light at West Baltimore’s Harlem Park Recreation Center yesterday, but most of those who did show up to vote for a successor to the late Rep. Elijah Cummings were senior citizens – and most said they voted for Kweisi Mfume.

“I don’t think that he would play politics,” said Kwesi Gray, 65, a retired city employee. “I think he’ll represent the community well.”

Most of the Democrats who voted in the special election appeared to agree – they gave Mfume the nomination by a wide margin, with 43% of the total vote.

Coming in a distant second was Cummings’ widow, Maya Rockeymoore Cummings, with 17%, followed by State Senator Jill Carter, who placed third with 16.1%.

(These results were with 312 of 313 precincts reporting as of this morning.) 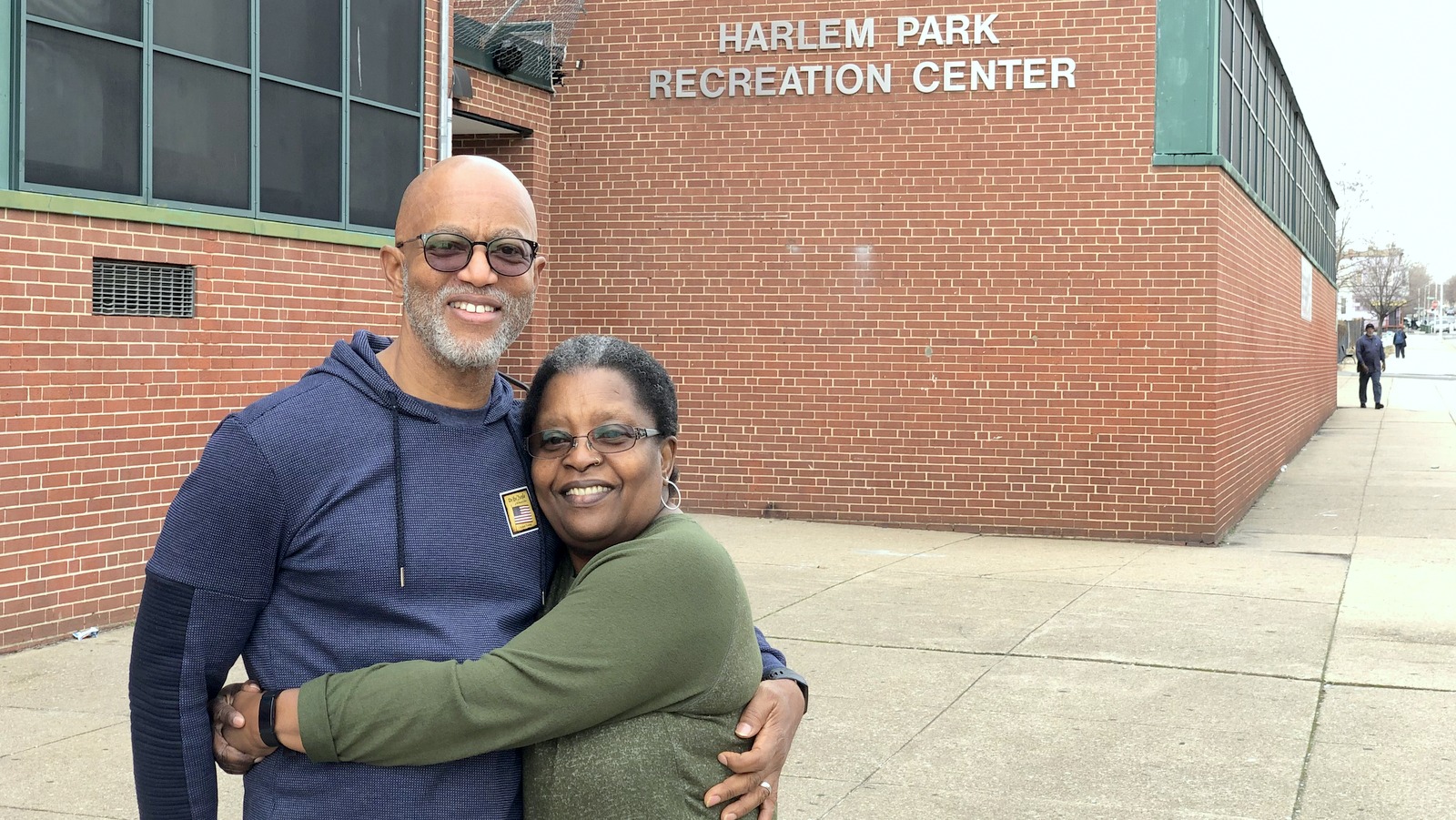 Voters Kwesi and Bisa Gray at a polling place in West Baltimore’s Harlem Park . (Ian Round)

A crowded field jumped into the race after Cummings died last October – 24 Democrats and eight Republicans eventually got in.

Baltimore-born Mfume enjoyed multiple advantages, including a familiar name and – even though he campaigned in a leased Porsche – an approachable demeanor, some said yesterday.

In addition to being road-tested, “he speaks to the common man,” said Bisa Gray, Kwesi Gray’s wife.

What’s more, Mfume’s hometown is the heart of the sprawling, heavily Democratic district.

Although the district geographically includes portions of Howard and Baltimore counties, about 60% its 343,168 Democrats live in Baltimore City.

Mfume had some challenges during the short 11-week campaign, particularly a news story detailing sexual harassment allegations and other issues during his time as president of the NAACP.

But isolated bad press apparently did little to undermine his appeal.

“We hit a lot of senior centers today,” Mfume said, standing outside of the Margaret Brent Elementary School in Charles Village.

Mfume had support from traditional power sources in town – the Interdenominational Ministerial Alliance, the Afro-American Newspapers – and connected individuals in the city. Former Mayor Stephanie Rawlings and lawyer Billy Murphy, for instance, were on the scene at his victory party.

The loss was especially disappointing for Carter supporters, who regarded the 55-year-old as a progressive champion, knocking on doors and plastering social media with pleas for voters to put #JillOnTheHill.

For some, her loss was a rude awakening.

“Mfume is going to run away with this isn’t he,” @FoxForceFlacco tweeted early in the evening. “Remind me never to pay attention to Twitter as an electoral harbinger again.”

Mfume’s win sent a chill through those who want to unseat incumbents and insiders in Baltimore’s upcoming April 28 Democratic primary.

“If Baltimore voters are all older folks who like to support former elected officials that is a *terrible* sign for the Mayoral primary,” @elipousson observed on Twitter.

Running as the farthest left of the candidates, Carter successfully sponsored “ban the box” legislation in Annapolis and stood nearly alone in opposing Johns Hopkins University’s efforts to get a private police force. 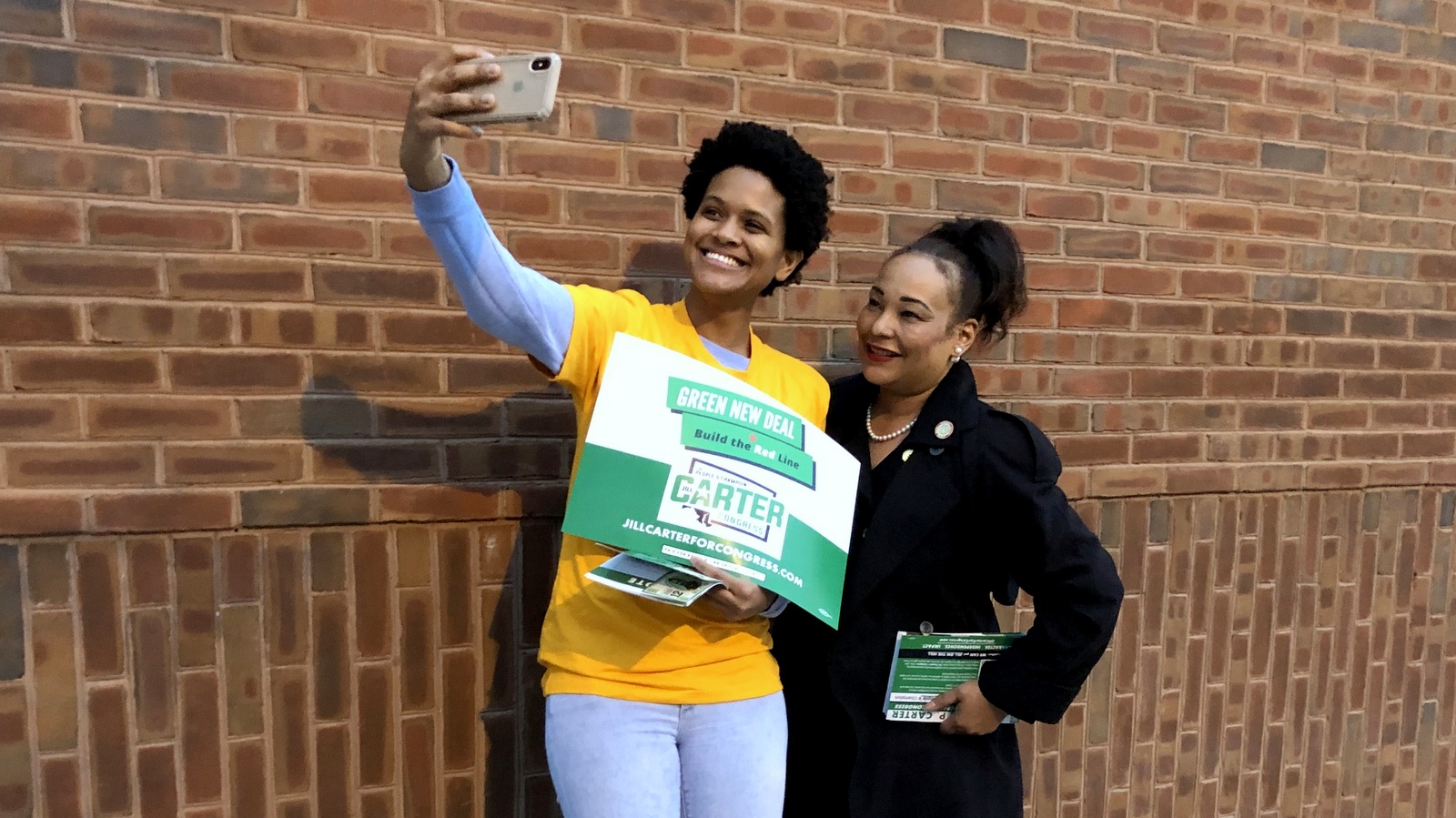 Those stances appealed to supporters like Anjana Turner, who worked for Carter’s campaign and three weeks ago was in Iowa knocking on doors for Bernie Sanders.

But it was something more that made Turner giddy as she took a selfie with her boss during an Election Day campaign stop.

While other Democrats have “these little progressive platforms,” Turner said, what sets Carter apart is her independence.

“You don’t have to wonder where she stands on things. I trust her to do the right thing and have a backbone when politicians are being corrupt.” 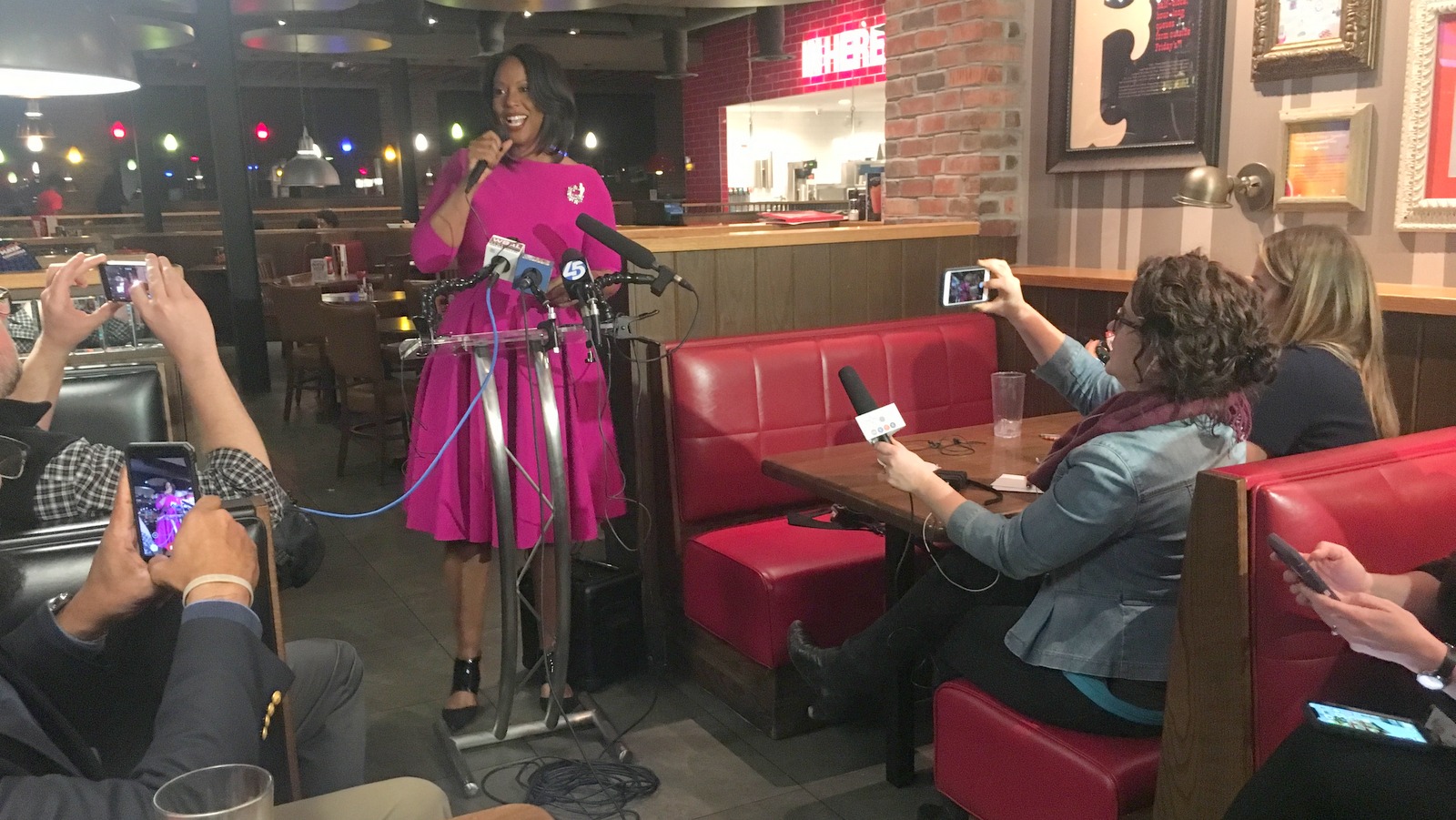 Another voter at the Margaret Brent school was 37-year-old writer Dave Woodworth, who explained why he voted for Rockeymoore Cummings.

Woodworth said he wants an insider. Even though he supports Carter’s platform more, he said he doesn’t see her proposals getting support from fellow Democrats and ever coming up for a vote.

“The district needs someone who’s an advocate who can bring money into the city,” he said.

At 600 Light Street in the Inner Harbor, an election judge said the turnout was strikingly low. (Maryland Election Board officials said last night that it appeared that only 18% of the district’s registered voters had voted.) 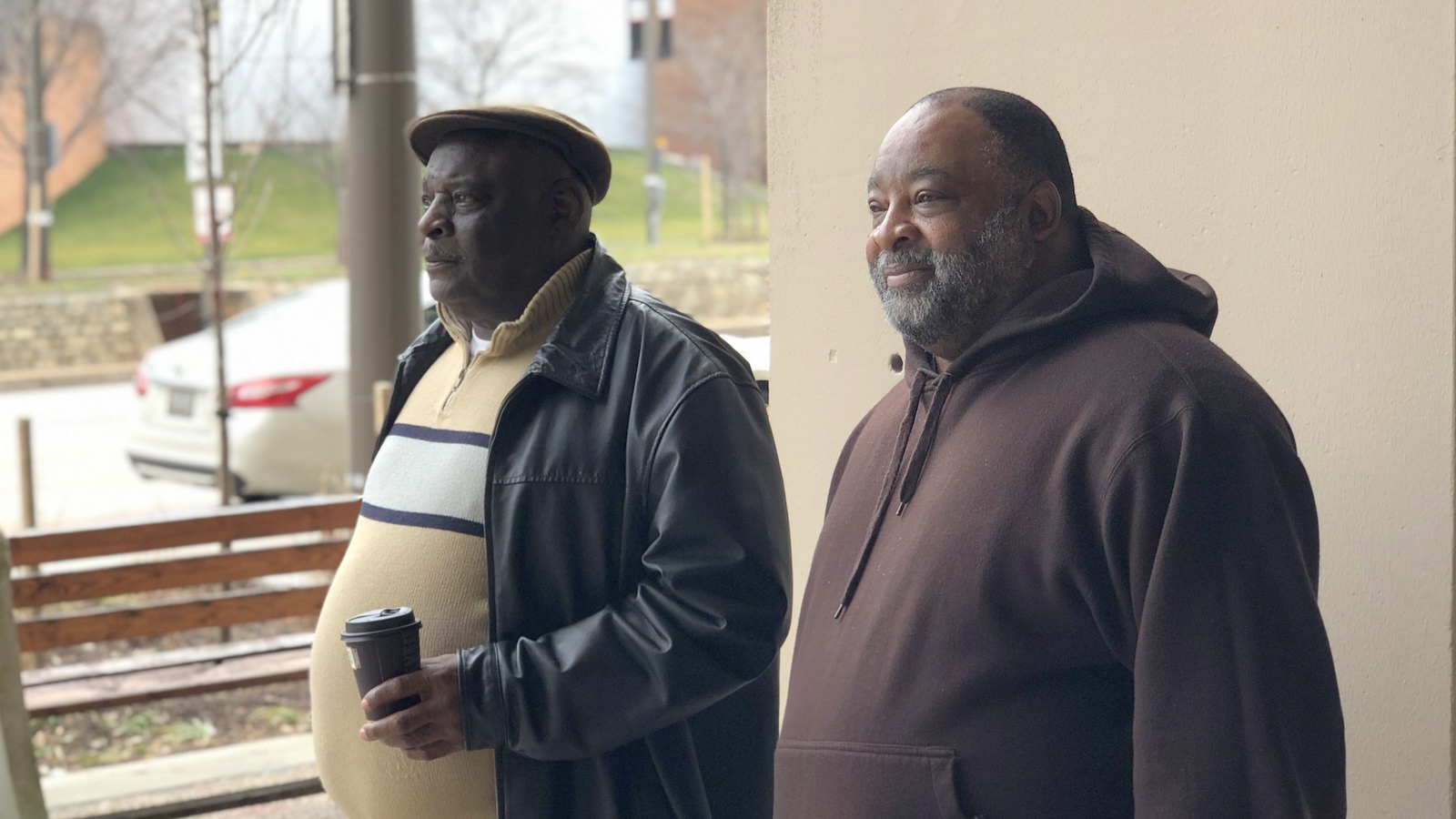 Alvin Jones and Donald Sketers at a downtown Baltimore polling place, . (Ian Round)

Two friends outside traded observations about the city, most of them pretty negative.

Donald Sketers, a lifelong Baltimorean, said he wasn’t sure who he was going to vote for, or even if he would vote. He said there wasn’t enough information for him to make an educated decision.

A disabled former Amtrak employee, the 61-year-old had a laundry list of priority issues, most of them local.

He mentioned police brutality and disproportionate harassment of people of color.

He spoke about the free Circulator bus that only serves white neighborhoods, and disproportionate economic development in the white neighborhoods. He said there aren’t enough opportunities for young people like there were when William Donald Schaefer was mayor (“Mayor Schaefer had the city rolling!”).

A resident of Christ Church Harbor Apartments, he said some of his neighbors optimistically point out the growing economy and strong job growth. But Sketers said economic inequality was as bad as ever.

“They got jobs, but they ain’t got career jobs,” he said.

Whether any of the candidates could do much about any of that, he just didn’t know.

Alvin Jones, 71, a retired transit and taxi driver, had a much simpler perspective. He planned to vote for Mfume.

“He been there,” Jones said. “Anybody else you gon’ have to train.”