But in an attempt to slow the progress of these and other bills, Councilman Robert Stokes introduced an “emergency resolution” at the request of Mayor Bernard C. “Jack” Young.

Stokes’s resolution seeks to create another commission to deliberate on the charter amendments. The resolution’s supporters say the Equity and Structure Committee, which Council President Brandon M. Scott created and which Councilman Bill Henry chairs, has not listened to the community enough.

“I believe ample community participation and due diligence is necessary,” said Councilman Leon Pinkett, who discussed the resolution at the Council’s working lunch Monday in Stokes’s absence.

Thirteen charter amendment bills are making their way through readings and committee hearings, as the council attempts to pass them before the August deadline to add them to this November’s ballot.

The Young Administration has said that some of them contradict each other and a few organizations and some Council members to call for a slower process.

“The three that we’re talking about tonight are some of the simplest ones that exist,” Henry said, pushing back.

“Sounds like the fox guarding the henhouse to me”  – Kris Burnett.

The mayor would nominate commission members and the Council would confirm them. The commission would submit a report June 1. There would be one from each Council district, and several from agencies under the mayor. Stokes, the mayor’s closest ally on the Council, chairs the appointments committee.

Councilman Kristerfer Burnett took issue with the number of people working for the mayor on the proposed commission, a fifth of the members would be from the executive branch.

“I questioned the level of appropriateness of that,” Burnett said. The parallel process, he said, would “duplicate efforts and create confusion.”

“Sounds like the fox guarding the henhouse to me,” Burnett said. 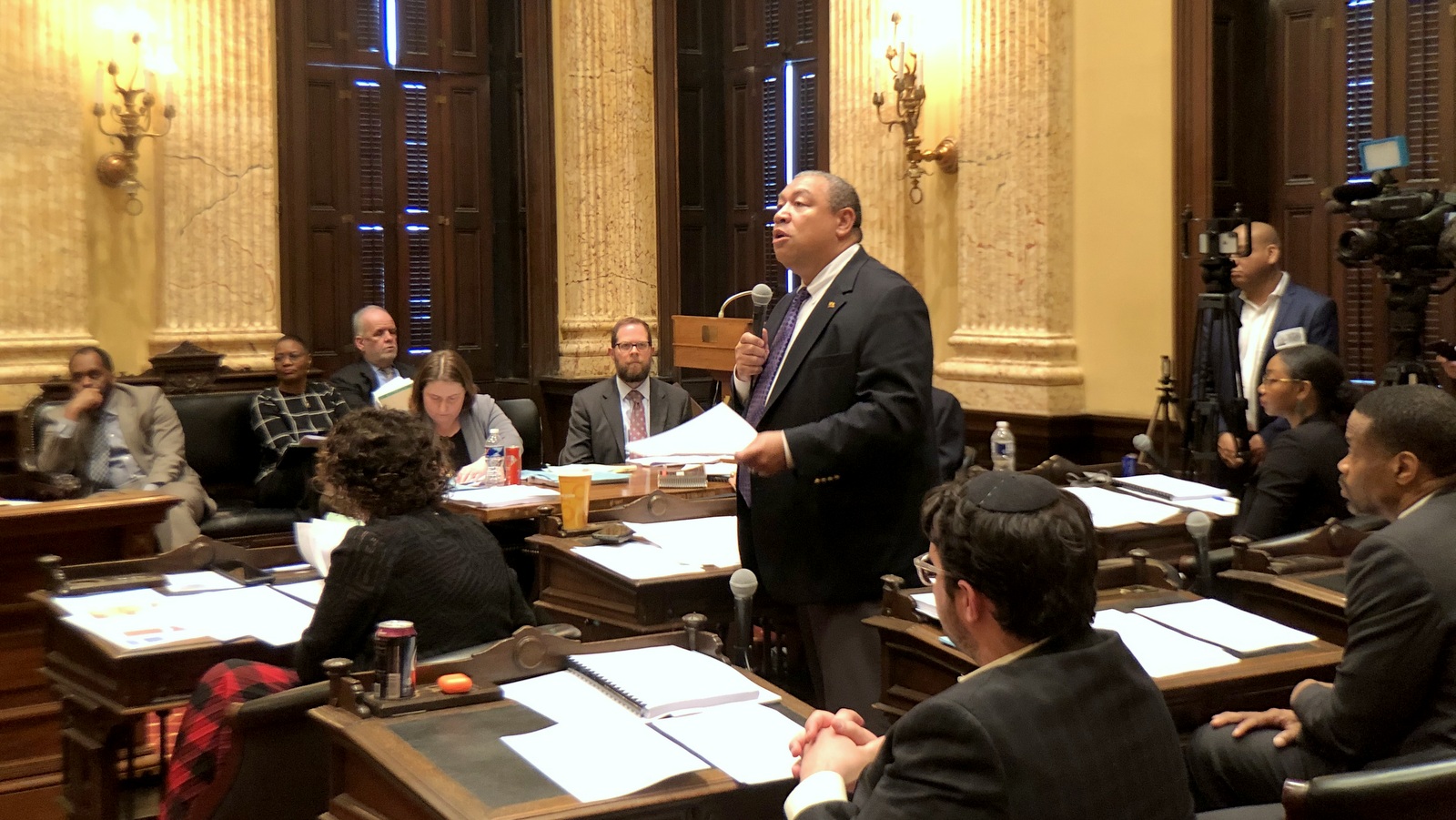 Councilman Bill Henry, chair of the Council’s Equity and Structure Committee. (Ian Round)

The three charter amendments passed their second reading, setting them up for a likely third and final passage at the City Council’s next full meeting, in two weeks.

The amendments were:
19-0441, which creates a commission to review the City Charter and make recommendations for changes every ten years. Scott introduced the bill last September.
19-0467, which eliminates a loophole by which the mayor can avoid an overridden veto because of the Council’s schedule. Dorsey introduced it in November.
19-0380, which allows the Council to override a veto with 10 votes instead of 12. Henry introduced the bill last April. The Council passed an amendment requested by the Finance Department; the mayor’s ability to veto line items of budgets will not be on the ballot.

At the lunch Monday afternoon, Henry, Burnett and Ryan Dorsey defended the way the Council is conducting the process.

They said the necessary deliberative body already exists, and it’s the City Council, whose members are elected by the public.

“We reject that,” said Lester Davis, Young’s spokesman. “We can’t have a situation where the people who are gonna be impacted aren’t driving it.”

Davis said the three members of the Equity and Structure Committee “are not engaging the public in a real way.”

Davis said the mayor would be open to having the mayor’s commission members only serve to give advice; they don’t need to have voting power.

“The process has been rushed,” he said.

“I appreciate the work of the Council and their desire to move quickly, but we can’t ignore our residents,” Young said in a statement. “I think taking a pause in the process and standing up the [commission] is the best way to make sure the people who elected us are truly in the driver’s seat of this legislative process.”

“The process has been rushed”  – Eric Costello.

In addition to its meetings at City Hall, Henry’s committee has held two meetings in other locations. Its next meeting is at Fort Worthington Elementary School next Monday.

Scott noted at the lunch that in August 2018, when Young was Council President, he introduced and passed a charter amendment bill in just one afternoon.

Citizens are eager to see discussion of structural changes at City Hall, Scott said, in a statement released yesterday.

“The residents of Baltimore have been very clear – they want greater transparency and accountability in their local government,” he said.

Costello’s security camera rebate program passed its third and final reading, and it is now headed to the mayor’s desk.

Councilman Dorsey cast the only vote against the bill, even though members Zeke Cohen, Danielle McCray and Shannon Sneed expressed concerns about how much the program would cost.

Cohen said he had received more information since he threatened to vote no. He was persuaded by the guarantee that, at least to start, the program will be funded by grants from the Mayor’s Office of Criminal Justice already dedicated to public safety.
Cohen has said he opposed using the general fund for camera rebates when the city has to find money to fund the recommendations of the Kirwan Commission.

When the program expands, Cohen said, “It’s going to require a much greater degree of scrutiny.”

But Costello said there is no pilot program; indeed, the bill includes no mention of a pilot.

“This is a program,” Costello said. “The program has been established.”