A nurse working at FutureCare’s Randallstown facility died last week of complications due to the novel coronavirus.

She is the first person known to have died of the virus who was employed by the nursing home chain, whose Lochearn facility is now the site of the biggest nursing home Covid-19 outbreak in Maryland.

Quen Agbor Ako “was beloved by the families, the residents and her peers,” said Gina Cooper, health care administrator at Pickersgill Retirement Community in Towson, where Ako previously worked as an LPN.

She said Ako, determined to better herself, went back to school and earned her RN degree, taking a full-time job at FutureCare as a nurse and occasionally returning to work at Pickersgill as an RN, on an as-needed basis.

Cooper told The Brew she was stunned to hear from Ako’s daughter that the 53-year-old had died on April 10 from complications due to COVID-19.

“She’s young. She had a family. It’s just shocking,” said Cooper, who said she last heard from Ako in February.

Officials at FutureCare Old Court, located at 5412 Old Court Road opposite Northwest Hospital, have not responded to requests for comment from The Brew.

The company has not issued a statement about Ako’s death, nor has it said how many coronavirus cases have been confirmed in its 15 area locations in addition to the 129 residents and 41 staff identified yesterday with the infection at Lochearn.

While the company has not publicly spoken of her passing, colleagues and family have posted prayers and tributes to the Cameroon-born mother on social media and on an online memorial.

Josso Yank, a former colleague at the Randallstown facility and fellow Cameroonian, commemorated Ako on Facebook.

“Your calmness! Your charisma! Your smile! Your encouraging words! Your maturity!” Yank wrote. “OMG! Your positive attitude! Your determination to live life to the fullest…. What happened sis? YOUR LOVE FOR LIFE! I AM STILL DREAMING…. Your Futurecare Old Court family will definitely miss you. A big branch has fallen. Profound Peace sis.”

Multiple staff members have told The Brew that FutureCare management did little to stem the spread of COVID-19 in its facilities during the early stages of the pandemic.

Indeed, staff at various locations have said management withheld protective equipment for a brief period, and only implemented greater safety measures after an emergency order by Governor Larry Hogan on April 5.

In a statement released in the wake of the COVID-19 outbreak at Lochearn, FutureCare said its “highest priority continues to be the safety and well-being of our staff and residents.”

The company added, “FutureCare has aggressively implemented infection control procedures and was an early adapter of visitation restriction, universal masking, and have implemented all of Gov. Hogan’s orders.” 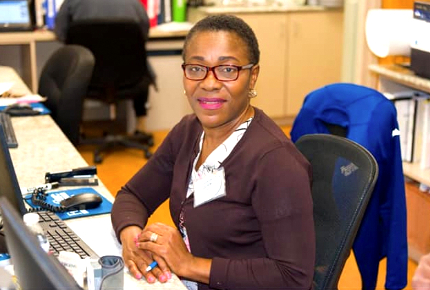 Ako began her career as a teacher and guidance counselor in her native Cameroon and became a nurse after moving to the United States in 2004.

Commenting on the forevermissed.com page, Giorgiana Koko Asah said Ako treated her daughter Daniela as her own.

“I want to ask everyone, if a friend shows so much love to your only child, how will you feel about that person,” wrote Asah, who lives in California.

“I am heartbroken, I am helpless, I am lost,” she wrote. “I can’t fill the gap she has left in Daniela’s life. What am I going to do?”

“Quen, you were a remarkably fine lady,” she wrote on the memorial page. “A dedicated and committed nurse.”