The contracts held by Lorenz Inc. were up for a one-year renewal – and there was nothing on the agenda to suggest anything but a routine approval – when Young interrupted City Council President Brandon Scott at the Board of Estimates meeting.

“I want to say something before you go any further,” he said. “I want people to know that when I was president of the City Council, I had a big problem with the mowing contracts.”

Back when those contracts were approved, Young did not have the votes to veto them. But now as mayor, controlling three of five BOE votes, Young exercised his right to terminate the agreements, citing the contracts by name while not specifically identifying Lorenz as the vendor.

“I think we can do a better job,” he told Scott and the panel’s other elected official, Comptroller Joan Pratt, who both listened in silence.

Young did not say how his administration plans to keep parks and roadway median strips clear of tall grass this spring and summer with its chief mowing vendor terminated.

Earlier this year, Young promised to look at ways to employ young people for mowing and park maintenance.

Today he said he had asked the Finance Department “to look at doing this in-house as opposed to paying all these millions of dollars to this one company.”

“What in the world is he talking about?” asked Joe Lorenz, president of the company, when informed of the mayor’s decision by The Brew.

“We have never been written up or verbally warned that our work was substandard. In fact, I got a letter this week that I’m fully in compliance in terms of our minority participation, certified payroll and other matters,” he said.

“Already Patterson Park and Druid Hill Park are overgrown. If the city doesn’t want us to do the mowing and maintenance, what are these parks going to look like by July?” – Joe Lorenz.

Lorenz received $12.4 million from the city for maintaining about 6,000 acres of public land between 2016 and 2019, according to purchasing department records. 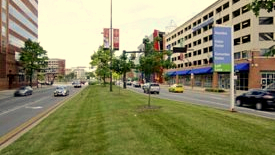 President Street is featured as one of the median strips Lorenz mows and maintains for the Baltimore Department of Transportation. (lorenzinc.net)

Lorenz said he had heard that Young was irked about a reservoir brush-clearing project that the Department of Public Works wanted his company to perform last January.

Community activist Kim Trueheart challenged the $40,000 contract, saying former “squeegee boys” she helped train in landscaping could do the work.

Young voiced support for the squeegee boys and flashed anger during a BOE meeting when he was told that the work was too dangerous for young people.

“I think that’s what did us in,” said Lorenz, who said he has never met the mayor nor contributed to his political committee.

Young did not mention the reservoir contract today. His spokesman, Lester Davis, did not respond to Brew requests for comment.

A “gut punch” coming to the minority and women’s businesses that subcontract with Lorenz.

Lorenz said the company was started 20 years and has expanded to become one of the largest turf maintenance companies in Maryland, handling soil drainage, reforestation and sports field maintenance in addition to mowing and tree planting.

He said termination of the contracts will be a blow for his company, but will be “a gut punch” to his MBE/WBE partners, listed in city records as 4 Evergreen Lawncare and Fouts Lawn.

“These guys have 36% of the contracts I do with the city. They employ 40 people. They are going to be affected in a huge way.”

“Already Patterson Park and Druid Hill [Park] are overgrown. If the city doesn’t want us to do the mowing and maintenance, what are these parks going to look like by July?”
__________________
To reach this reporter: reuttermark@yahoo.com