Maggie Sabo and her housemates like to work outside in the garden, but lately this once-peaceful activity has been spoiled, the West Baltimore resident says, by a loud droning noise from which there is no escape.

That’s because the Baltimore Police Department’s new surveillance plane has been flying directly over their house on its circular route almost every day.

“It’s the same exact flight path for five hours at a time. While all of us are gardening, we just hear it buzzing constantly,” said Sabo, who added that many people move to her Garwyn Oaks neighborhood for its quiet streets.

“It feels really shitty, like we’re being targeted,” the 40-year-old said.

The small Cessna, outfitted with a bank of cameras recording everything on the ground within its range, began flying over Baltimore on May 1, pitched by its backers as a crime-fighting tool.

After being denounced by the ACLU of Maryland and others as an unconstitutional invasion of privacy, it’s now generating negative reactions as a noise nuisance.

Criticism on social media has been building, many complaining that they can hear the Cessna not just from outside their house but from inside, too. 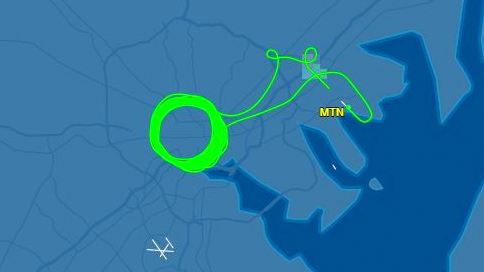 The Baltimore police surveillance plane’s route on Saturday, May 2. (flightaware.com)

On Twitter, several have directed their anger at the Texas philanthropists footing the bill for the $3.7 million Aerial Investigation Research (AIR) program, more commonly known as the “spy plane.”

“Could we get a motor producing the same level of decibels and crank it outside the Texas home of billionaire spy plane funders Laura and John Arnold for 40 hours a week?” wrote @FoxForceFlacco. 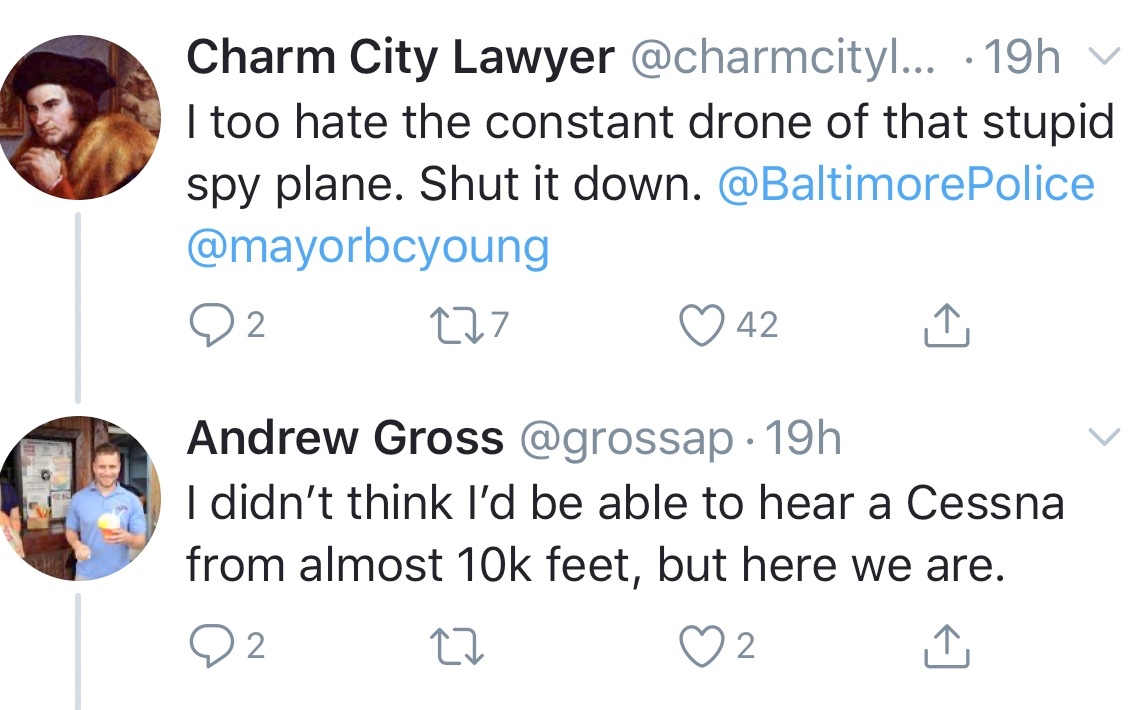 The noise may become more noticeable when two additional planes  start humming over the city as part of the AIR program.

Eldridge said the BPD so far has not received any complaints about the noise.

“The department takes any complaints about noise from the AIR Program very seriously,” she added.

The plane is flying as part of an agreement between the city and Ohio-based Persistent Surveillance Systems that was approved in March by the Board of Estimates.

But the company has operated in Baltimore before. Police allowed company planes to fly over town secretly in 2016 in a program that was only disclosed through reporting by Bloomberg News.

When the company returned last year to pitch the surveillance flights, Police Commissioner Michael Harrison was initially skeptical, but eventually supported the idea, which has had the backing of Mayor Bernard C. “Jack” Young.

Civil liberties lawyers, who sued unsuccessfully in federal court to halt the flights, say the program is ripe for abuse.

Under the agreement reached with Baltimore, AIR will fly camera-laden planes that can track the locations of people and vehicles in a 32-square-mile area.

The footage is supposed to be used to assist police in investigations of shootings, homicides, robberies and carjackings.

The plane operates during daytime hours. It typically circles one part of the city from 9 a.m. to 2 p.m., then flies around a different area from roughly 3:30 to 8 p.m., according to public flight data.

Online tracking for the surveillance plane (N73266) on May 12. (flightaware.com) shows its altitude was around 3,000 feet.

So far, the prop plane being used, N73266, has flown at significantly different altitudes each day, largely determined by the weather since the plane must fly below the clouds to collect footage.

On Monday, for example, the plane flew at 7,500 feet for a few hours in the morning before dropping down to 3,500 feet for most of the afternoon.

Other days it has flown much higher – on Saturday, May 2, for example, the plane flew at about 9,300 feet for most of the day.

Some city residents, like Sara Anderson, say they have been so bothered by the sound that they are keeping a record of it. Anderson noticed the noise 12 times during a 90-minute walk around her Ednor Gardens neighborhood in North Baltimore.

“I might lose my damned mind with three [planes],” she said in a message to The Brew. “That’s leaf blower auditory-obnoxious levels.”

While the plane’s drone is bothersome, Anderson said, she is more concerned about what a private company might do with the data it collects on people’s locations.

Tavon Benson, a 28-year-old West Baltimore resident, said his friends have noticed the plane, but didn’t know why it was there.

“A lot of people in our neighborhood don’t pay attention to the news and know that it’s up there spying on them,” Benson said.

Asked if he thinks the AIR program makes sense, Benson called it a “band-aid” that doesn’t address the underlying causes of crime, such as a lack of jobs and quality education.

“I think this strange plane idea shows the city government’s inability to come up with an actual plan to combat violence in these neighborhoods,” Benson said.

“Spying on them won’t change the 30% unemployment rate in West Baltimore,” he added.

Marvin Hayes said he wasn’t too focused on the noise because in Sandtown where he lives, it has been drowned out by other sounds, like police sirens, shouting from corner open-drug markets and the police helicopters that also fly overhead.

But Hayes echoed Benson’s concern that few in his community know about the surveillance.

“The city hasn’t done enough to educate us on all the capabilities of this plane, like, I don’t even know what it’s actually doing,” Hayes said.

“The whole thing makes me a little uncomfortable, since they’re putting this plane up to spy on people without doing a good job to explain it to the community.”

Police say it is “too soon to determine the use the plane’s imagery for any investigation.”

Asked if the camera footage has been used to solve any crimes so far, BPD’s Eldridge would only say it’s “too soon to determine the use of the plane’s imagery for any investigation.”

Part of the concern on social media has been that the plane appears to fly primarily over West and East Baltimore in black neighborhoods.

Eldridge said the department is using historical data on homicides, shootings and armed robberies to determine the plane’s flight pattern.

As for the noise, Eldridge said the program may try to respond to the criticism if possible.

“We continue to consider the weather and other potential complaints to have the plane fly higher to reduce noise,” she said.