The big block letters painted on Gay Street in front of City Hall may say, “DEFUND THE POLICE,” but the Board of Estimates did the exact opposite yesterday – it refunded the department’s body camera program.

Axon is the Scottsdale, Arizona, weapons and apps contractor (its slogan: “transforming public safety with technology”) hired to outfit police with body-worn cameras.

What began as a relatively low-cost way to curb excessive police use-of-force behavior in the wake of the in-custody death of Freddie Gray has morphed into a grand exercise in expensive software and vast reams of data.

Including yesterday’s award, the program’s costs have tripled from $11.3 million to $35.1 million.

In return for the latest slug of money ($13,287,594.08, according to yesterday’s board agenda), Axon will replace the police department’s legacy Record Management System with its own Evidence.com System to store and manage body camera video and audio footage.

The new software is needed, according to the agenda, so that police can meet a 2021 deadline to make their Incident-Based Reporting System compatible with the FBI’s system and to comply with the Justice Department consent decree.

As an added bonus, Axon also will agree to “allow the BPD to keep the current pricing [of body-camera equipment] through 2026,” according to the agenda. 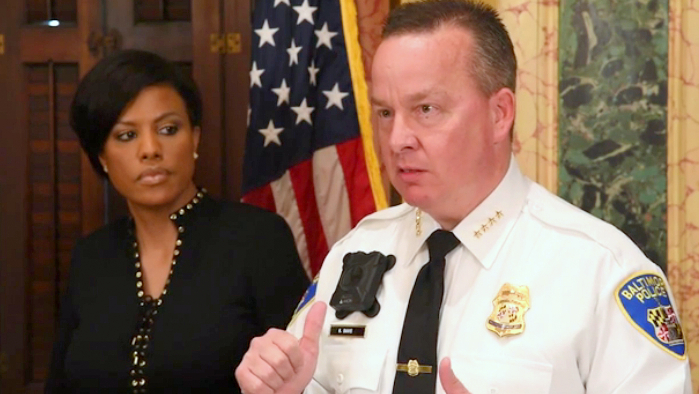 Jury Out on Cameras

Communities across the country are continuing to invest in body-worn camera programs, even as their effectiveness remains a subject for debate.

While the video footage can provide valuable information about police behavior, it can also be manipulated (or simply turned off) by officers making violent arrests or even planting evidence.

“Police video is still hindered by a larger operating system: police training, practices, and cultures that promote aggressiveness and exacerbate existing racial biases, as well as old laws and police unions that foil transparency and accountability,” this Fast Company investigation of police body camera use points out.

A 2017 study of the Washington Metro police by The Lab @ DC found that police didn’t act much differently when outfitted with cameras. The study concluded that the public “should not expect dramatic reductions in use of force complaints or other large-scale shifts in police behavior solely from the deployment of this technology.”

In Baltimore, much of recent body camera spending by police has involved acquiring various enhancements peddled by Axon.

For example, in January 2019, the Board of Estimates agreed to pay  $3.4 million for Axon software that permitted police cameras to be “integrated” with tasers and “automatically triggered” at the sound of gunshots.

At this same January 30, 2019 meeting, the BOE also agreed to pay Axon another $4.6 million for police tasers through October 2023.

Protests and a Primary

Since George Floyd’s death under the knee of a Minneapolis police officer, demonstrations have spread across the globe to protest harsh police tactics, especially those applied to Black Americans.

In Baltimore, “Defund the Police” was the rallying call of demonstrations just two weeks ago that resulted in the pink lettering on Gay Street.

And a week before that, Scott had officially won the Democratic Party primary for mayor, campaigning a platform of accountability, openness and reform in city government, especially regarding police matters.

Campaign slogans, however, have not yet translated into changed procedures at the Board of Estimates, which Mayor Young controls with three of the five votes, but which Scott has a strong say over as the body’s president.

Voiceless Before a Vote

At yesterday’s virtual meeting presided over by Scott, neither Axon nor the police department was asked to appear before the board and explain the latest cost overrun.

There was, in fact, no mention of the $13 million expenditure before it was approved in a blanket voice vote involving dozens of spending items.

Unless you downloaded the board’s agenda and worked your way to page 95 of its contents, you (and the rest of Baltimore) would be none the wiser.

Page 95 of  the June 24, 2020 Board of Estimates agenda discloses the latest price increase for the body cam program.