More than 30 people, including three Republican lawmakers from Baltimore County, stood at the base of the Christopher Columbus statue in Little Italy today, demanding that Mayor Bernard C. “Jack” Young protect the controversial monument, which protesters have threatened to take down.

“These people who publicly threaten to destroy these statues are not protesters. They terrorize and ruin communities, and discredit those who legitimately protest,” said Delegate Nino Mangione, whose district stretches north to the Pennsylvania line.

“If you do not like or appreciate Christopher Columbus, don’t visit this statue,” Mangione said. “Stay the hell away from it.”

“He wasn’t perfect,” Szeliga said of Columbus. “No man is perfect, and no government is perfect. But we are to celebrate men and women, warts and all.”

Pica announced that two unarmed security guards would be placed near the statue on 24-hour surveillance duties starting tomorrow, noting that the guards had been instructed to contact Pica and Baltimore City Police, “who have been made aware of this.” 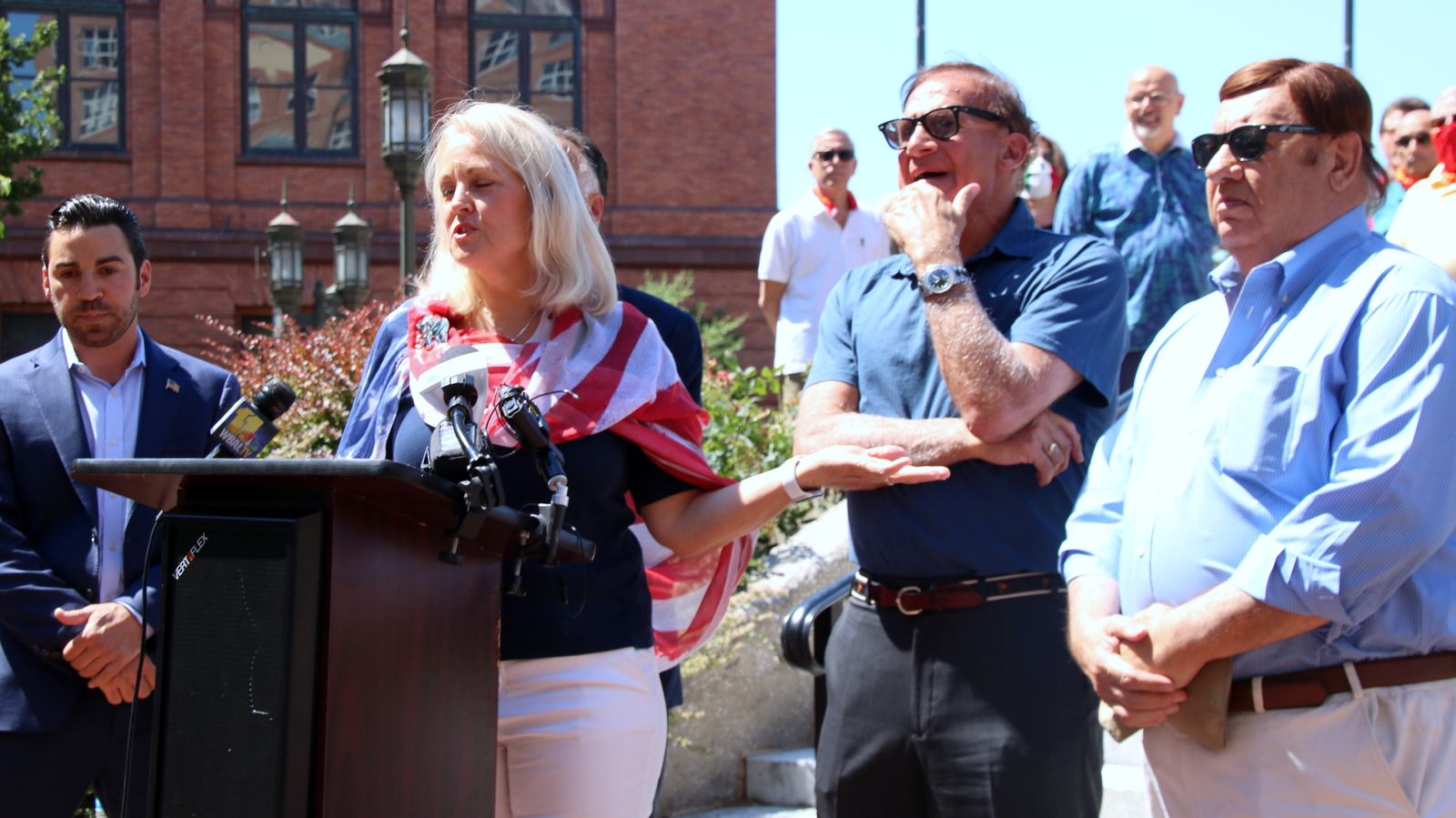 Amid a surge of Black Lives Matter protests following the death of George Floyd at the hands of Minneapolis police, scores of monuments across the country with ties to slavery, White supremacy and the genocide of Native Americans have been toppled and destroyed by protesters or removed by local leaders.

Last week, the group Baltimore Bloc issued a public warning to Mayor Young, saying on Twitter that if he does not take down the city’s three Columbus statues, he risks “leaving it up to The People.”

Today Mangione and Szeliga said they sent one letter to Young, asking that he prevent the statues from being taken down, and another  to Maryland Gov. Larry Hogan, asking that he send in the National Guard to protect the monuments if Young does not act.

(Young’s office did not respond to a request for comment. A spokesman for Hogan said he “has no response at this time.”)

Behind the designated speakers were dozens of monument supporters lined up next to the statue, many of them wearing scarves that read “Roma Sausage & Meatballs.”

Justin Pecora, vice president of Roma Sausage, called the taking down of statues “extremism” that should be stopped.

“For all us as Italian Americans, Columbus is an icon,” Pecora said. “They say he didn’t actually discover America, but he was the first one who connected the Old World to America, and we’re proud of that.” 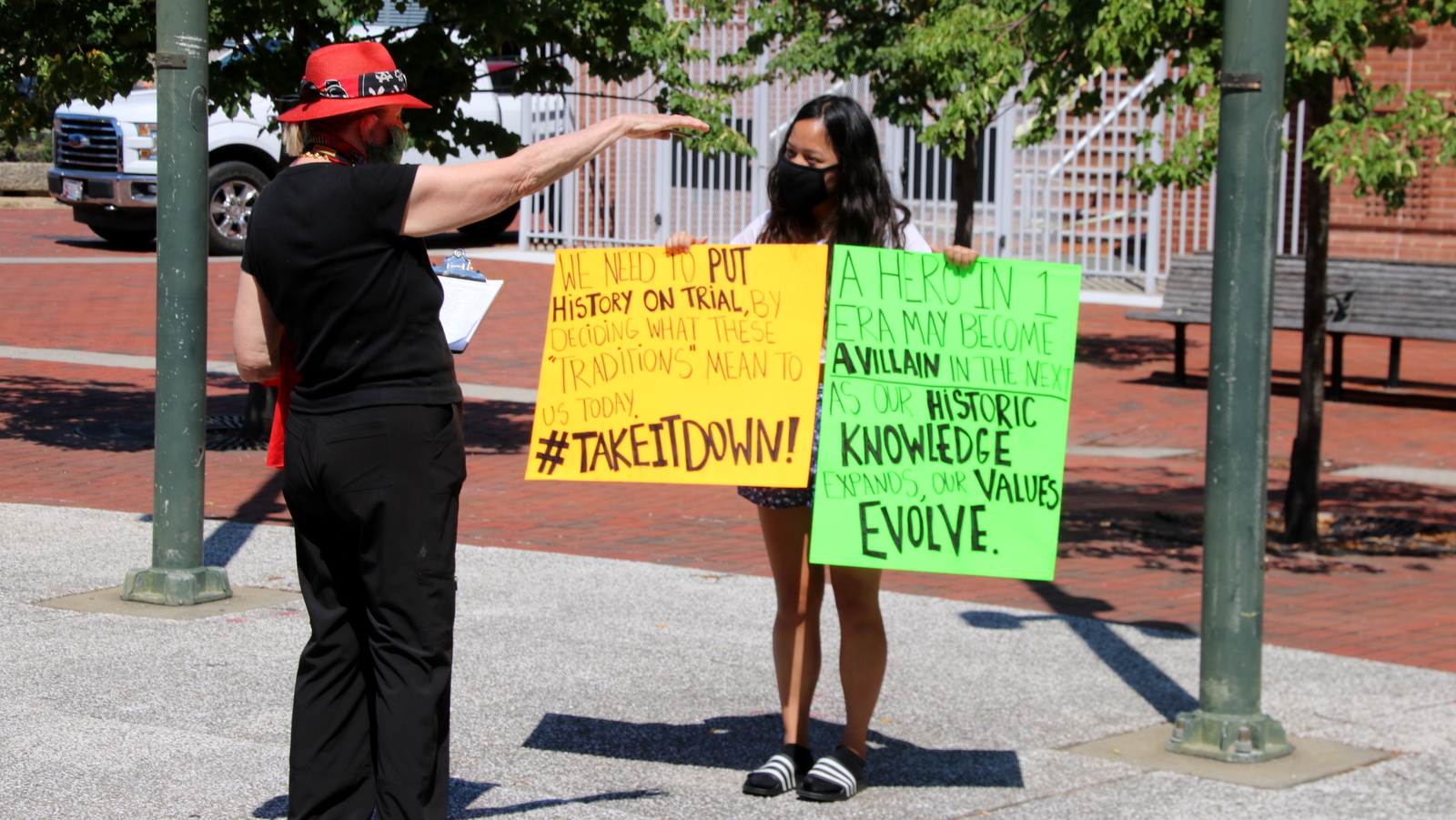 A critic of Baltimore’s Columbus statue in Little Italy is confronted by one of its defenders. (Louis Krauss)

But those calling for tributes to the 15th Century navigator to be removed point to racist behavior, including Columbus treatment of indigenous people upon his arrival to North America, enslaving them and dissuading rebellion by parading dismembered bodies through the streets.

When a reporter asked about this history, one man in the crowd shouted, “Move to Canada!”

Away from the television cameras and speakers, three protesters stood and held signs in opposition to the statue.

“A hero in one era may become a villain in the next as our historic knowledge expands, our values evolve,” read the sign held by Sarah Nguyen, who lives in the apartment building next to the statue.

Pica, speaking to a reporter, offered an elaborate defense of the Genoese navigator.

“There are a lot of naysayers of Columbus, but the first criticism of Columbus came from the Ku Klux Klan in the 1930s, because they didn’t like Catholics,” he said. “Since then there has been a lot of criticism, but it’s not based on any evidence. The only evidence is a dossier compiled by the man who sought to remove Columbus and replace him.” 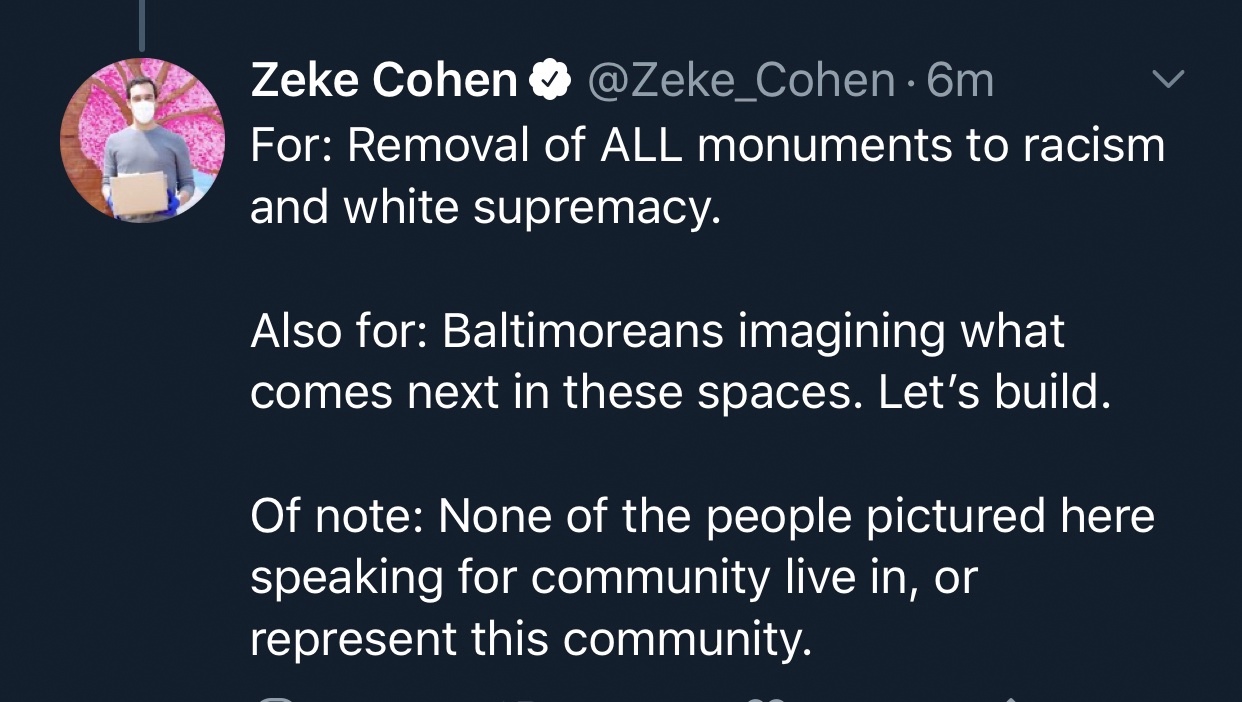 Councilman Zeke Cohen’s reply on Twitter, when asked if he supports the removal of the Columbus statue near the Inner Harbor.

Reached after the news conference, Ashley Minner, an enrolled member of the Lumbee tribe, said Columbus’ brutal treatment of indigenous people is well documented and questioned why a man at the news conference would say “All Lives Matter” while defending Columbus.

“There are many wonderful Italian figures all of us could hold in high esteem. Pick another hero,” said Minner, an artist and scholar who is a professor of the practice at the University of Maryland, Baltimore County.

“How can those who actually believe ‘all lives matter’ defend or celebrate a murderer, rapist, and slaver?” she said.

“Baltimore’s American Indian community, like its Italian American community, was formed by folks who migrated to this city seeking work and a better quality of life,” Minner continued. “Our people suffered similar indignities in the transition. We have a lot in common – more that should unite us than what divides us.”

“We urge mayor to take action”

The next move for statue opponents is unclear, but Baltimore Bloc indicated they are not backing down.

In a statement provided to The Brew, the organization said that it stands in support of people who aim to take down statues “glorifying white supremacists.”

“We urge the mayor and other politicians to take action before any of our young black and brown kinfolk take matters into their own hands,” the group said.

“Doing so would ensure the safety of our kinfolk who risk being targeted by violent Baltimore police officers and their racist vigilante sympathizes who have already been making threats of violence against us.”