Last year, the landscape architecture and urban design firm West 8 won a contract, potentially worth up to $2 million, to re-envision miles of the Middle Branch waterfront.

Now the contract is coming under question after a community member found a photo allegedly depicting a West 8 employee participating in a controversial Dutch tradition at a St. Nicholas party at the company’s headquarters in Rotterdam, the Netherlands.

The photo shows three white people dressed as Black Pete (Zwarte Piet), St. Nicholas’ “helper” according to Dutch folklore, which has increasingly come under fire as an offensive racist stereotype. It was circulated in an email from someone identifying themselves only as a “Middle Branch citizen.”

The Brew has not been able to independently confirm that the photo is of West 8 employees. But on the wall in the background, there appear to be landscape architecture designs, and the photo’s metadata include the date, longitude and latitude of the photo.

It shows that the photo was taken on the afternoon of November 30, 2012 at the company’s Rotterdam office.

Responding to an email, “Middle Branch citizen” said the man dressed as Sinterclaas, the Dutch take on St. Nicholas, was a West 8 employee who no longer works there. The people in blackface were the ex-employee’s children. The use of blackface was said to be a custom at the Rotterdam office.

Community members say the company has acknowledged the photo is from its 2012 Christmas party.

West 8 has not returned The Brew’s multiple requests for comment. A spokesman for Mayor Bernard C. “Jack” Young did not return a request for comment either. 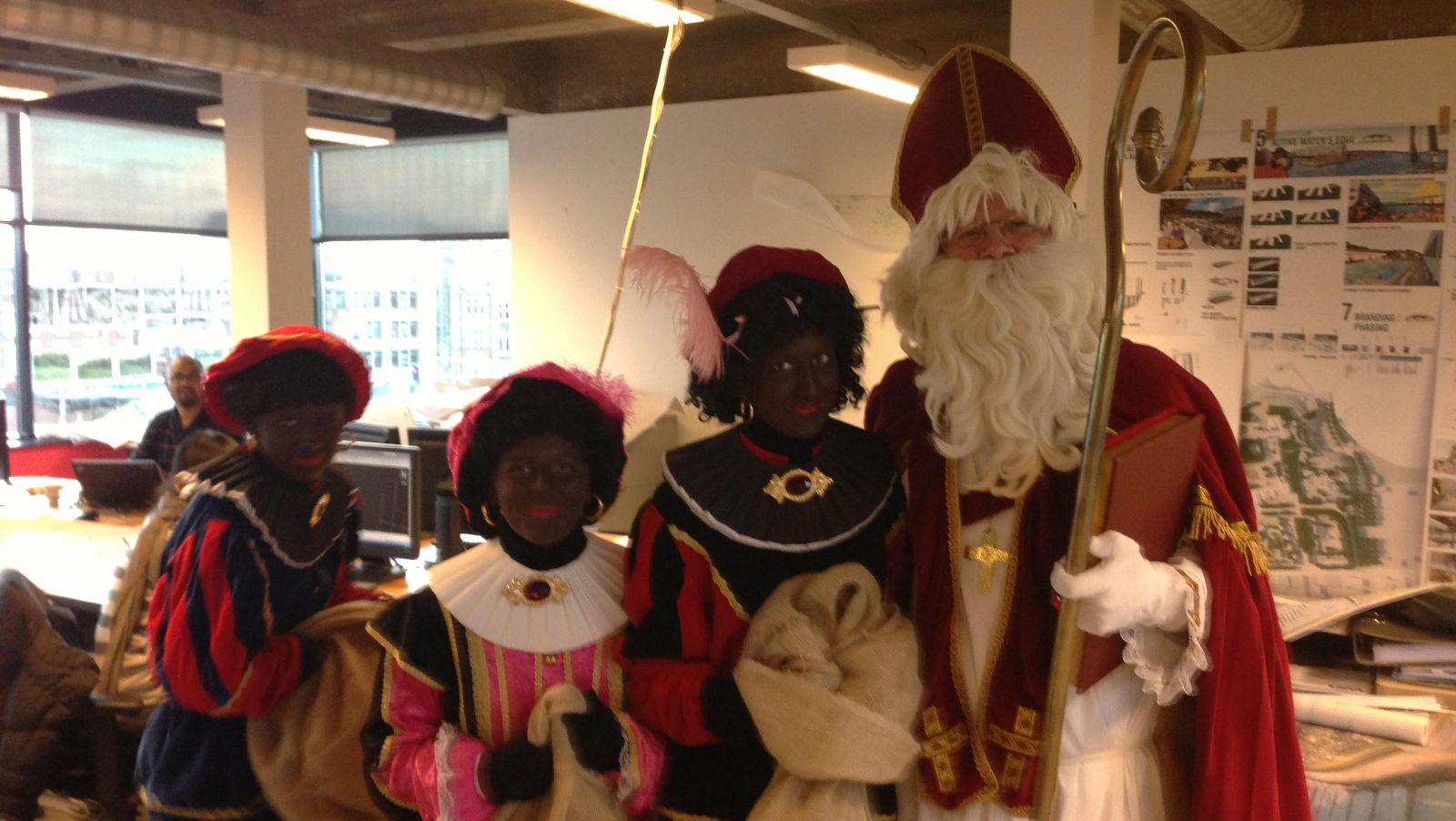 A 2012 photo allegedly showing a West 8 employee and family acting out the blackface “Zwarte Piet” tradition.

Some are now demanding the company step away from the project.

“We have to set the standard that racism will not be tolerated,” Phylicia Porter told The Brew.

Porter, who won the Democratic Party primary last month and stands to become southwest Baltimore’s next City Council representative, is also the vice chair of South Baltimore Gateway Partnership, which is supplying some of the waterfront design funding.

When Keisha Allen saw the photo, “I was like, ‘Holy you-know-what.’ That’s just one culture and one tradition that I can’t get past,” she told The Brew. Allen is president of the Westport Neighborhood Association.

“I was like, ‘Holy you-know-what.’ That’s just one culture and one tradition that I can’t get past”  – Keisha Allen.

“While I am aware that there is a tradition in Dutch culture to dress up this way, the work West 8 has been tasked with doing is to take place in a majority Black city and requires a level of cultural competence not displayed by that practice,” she said, in a statement to the Partnership which she released to the public.

Hodges-Hiken said she is “doubtful there is further information that would contextualize this behavior that would make it acceptable.”

A protester at a recent rally against the holiday tradition at Eindhoven, the Netherlands. (npr.org)

In Support of BLM

West 8 recently posted a pro-Black Lives Matter statement on its website, which did not mention the Baltimore project.

The statement reads, in part:

“West 8 strongly stands by the Black Lives Matter movement and we believe, unequivocally, that there is zero room for any form of racism or discrimination, in our offices, our field and the rest of the world. The recent protests have opened the door to serious conversations, not only in North America but also in the Netherlands. It is not enough to be complacent; going forward we must be actively anti-racist and call out systematic injustices within our communities to create positive change.”

The company pledged to increase local hiring and make a greater effort to offer internships and mentorship opportunities to minorities.

Porter said that on the City Council, she will work to make sure the project continues without delay if a new firm takes over. The firms that came in second and third in the bidding process – James Corner Field Operations and Hargreaves Jones – would likely be selected.

“I’m trying to make it so that we do not lose momentum,” she said.

Allen and Hodges-Hiken said they want Black local architects to take over. Both expressed doubts that a firm willing to tolerate blackface would provide equitable access to the water for Black neighborhoods such as Westport and Cherry Hill.

“I could not bear to see the look on the face of one of our Westport children interacting with the built environment created by West 8, questioning whether their value system worked to include or exclude that child,” said Hodges-Hiken. “Let’s turn this crisis into an opportunity.”

West 8’s master plan would return much of the long-neglected tributary of the Patapsco River to wetlands and nature trails.

One of its ideas is a redesigned Hanover Street bridge “liberated” from traffic as well as pavilions and a boat house.

The architects also propose a new bridge between Port Covington and Brooklyn, building an artificial island midway along the route. No price tag has been set on such an undertaking. 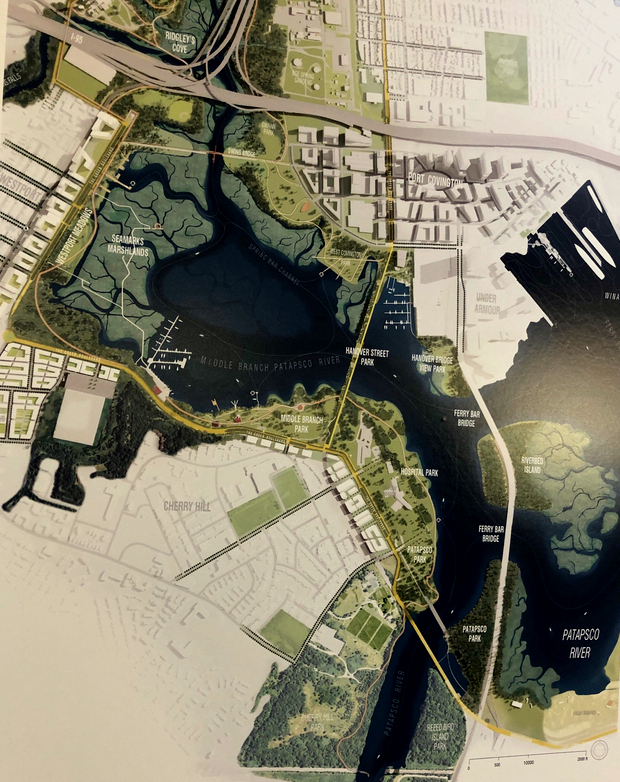 West 8 has proposed a bridge linking Port Covington (where Under Armour’s global headquarters project is on indefinite hold) and Frankfurst Avenue in Brooklyn. An artificial island and network of new wetlands are also shown. (West 8)

The firm was chosen in 2019 through a process managed by the Parks and People Foundation on behalf of the city.

West 8’s entry received the top ranking from a five-member jury of local leaders and design pros. Mayor Young praised their proposal for the Middle Branch waterfront as the one that “most closely aligns with what residents want to see in their communities.”

This year the company was awarded a $325,200 contract with the city for the initial phases of the project.

Parks and People Foundation managed community engagement and design team selection for the city under a contract with the city and the South Baltimore Gateway Partnership.

The foundation’s executive director, Frank Lance, directed all questions about the photo to the Young administration and the Gateway Partnership.