Baltimore’s Board of School Commissioners was set to award a no-bid $6 million contract to a brand-new company this afternoon.

But the item was pulled from the meeting agenda between last night and this morning after a parent voiced concern on social media.

A Boston-based company, Reconstruction US, would have tutored 5,000 Baltimore public school students from elementary school through high school for the 2020-2021 school year.

Reconstruction US offers “unapologetic Black education,” according to its website. It supplements school curricula by teaching about Black history and culture in an “authentic, identity-affirming way so that students of all backgrounds benefit from a more complete understanding of our shared history and society.”

The catch: the company appears to have been founded just this month, according to its profiles on LinkedIn and Twitter. And two people associated with it have faced ethics complaints in recent years.

Melissa Schober, an advocate and parent of a student, found the proposed contract and wrote about it on Twitter. She questioned why City Schools would award it to a brand-new company without a competitive bid.

“Excellent, sounds amazing!” Schober tweeted about the curriculum. “However, can you say what led you to contract with a company that was formed this month?”

The item disappeared from the agenda today, but Schober posted a PDF after downloading it yesterday.

The company’s CEO, Kaya Henderson, led Washington, D.C.’s public schools from 2010 to 2016. She won praise for increased enrollment and test scores, but was the subject of a D.C. Inspector General investigation that found she gave preferential treatment to the children of city officials.

The Washington Post reported that Henderson allowed those children to enroll in high-performing schools outside their attendance boundaries.

She was also censured by the city’s ethics board for soliciting a six-figure contribution for a gala for teachers.

Henderson is now a co-host of the Crooked Media podcast, “Pod Save the People.” DeRay Mckesson, a former City Schools official and a Black Lives Matter activist, co-hosts the show. 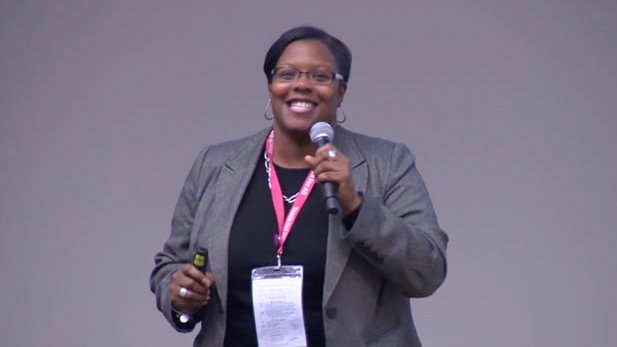 Kaya Henderson from a 2015 photo when she was the D.C. Public Schools chancellor. (Vimeo)

According to a search on who.is, the owner of the company’s website is Roland Fryer, a prominent Harvard economist who was suspended for sexual harassment last year.

Tina Hike-Hubbard, City Schools chief of communications, wrote in the since-removed agenda item that Reconstruction US’s curriculum and focus on the Black diaspora justified awarding it a contract without competition.

She wrote, in part:

“While City Schools currently has contracts with several organizations that provide tutoring services, none of our district-approved vendors are able to provide what Reconstruction US can offer. This is the only vendor that combines a supplemental K-12 curriculum designed by curriculum experts with deep knowledge of the Black experience in America, programming designed to affirm the identity of Black students, and online tutoring provided by educators with a focus on recruiting educators who have deep knowledge of and empathy towards the Black experience.”

Gwendolyn Chambers, a spokesperson for CEO Sonja Santelises, said she didn’t know why the contract was removed from the agenda, nor who removed it.

The document says tutors would be paid $12 an hour, but the job posting on the company’s website advertises $20-per-hour wages.