For decades, Duncan Street Miracle Garden, hidden by vacant rowhouses on three sides, has provided bushels of fresh vegetables and fruits to the Broadway East community.

In the 1980s and 1990s, this was one of Baltimore’s biggest community gardens, says Lewis Sharpe, who has stewarded the land since then, giving everything raised there away for free.

Usually, Sharpe plants around $800 worth of seeds and seedlings each season, assisted by small grants and assorted community do-gooders. But this year, he didn’t plant anything, in part because he didn’t have enough people to help.

Planting season coincided with the beginning of the coronavirus pandemic, and volunteers didn’t want to expose themselves to the virus. It’s a challenge faced across the country these days by community gardens, whose volunteers typically work in close contact, sharing tools and handling produce.

“What you’re looking at are the impacts of Covid,” said Katie Lautar, executive director of Baltimore Green Space, which owns the land.
“People in the neighborhood are fearful of volunteering.”

Another factor is that Sharpe, who is featured in a two-story-tall mural on the side of a rowhouse facing the garden, was sick for a time earlier this year and couldn’t work. 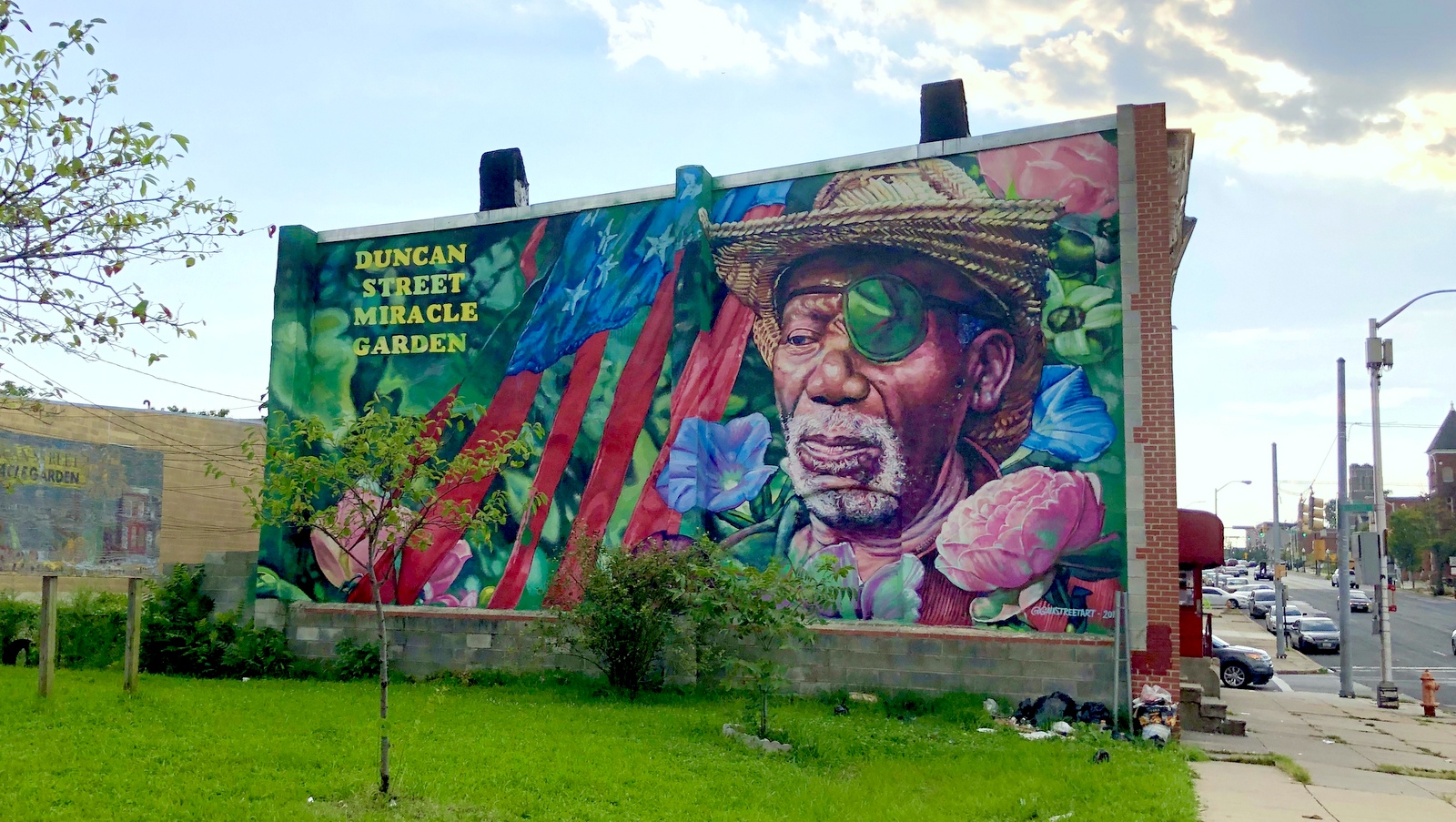 A mural, by the artist Gaia, pays tribute to the Duncan Street Miracle Garden’s longtime steward, Lewis Sharpe. (Ian Round)

On a recent afternoon in the garden, he downplayed the situation.

“I’m doing all right. I’m trying to help the people who need it,” he said. “When it ain’t hot, I guess I spend every day here.”

But the contrast with photographs of past years’ abundant crops and enthusiastic volunteers – from the Maryland Institute College of Art and Johns Hopkins Bloomberg School of Public Health, among other institutions –  made the impact of the pandemic clear. 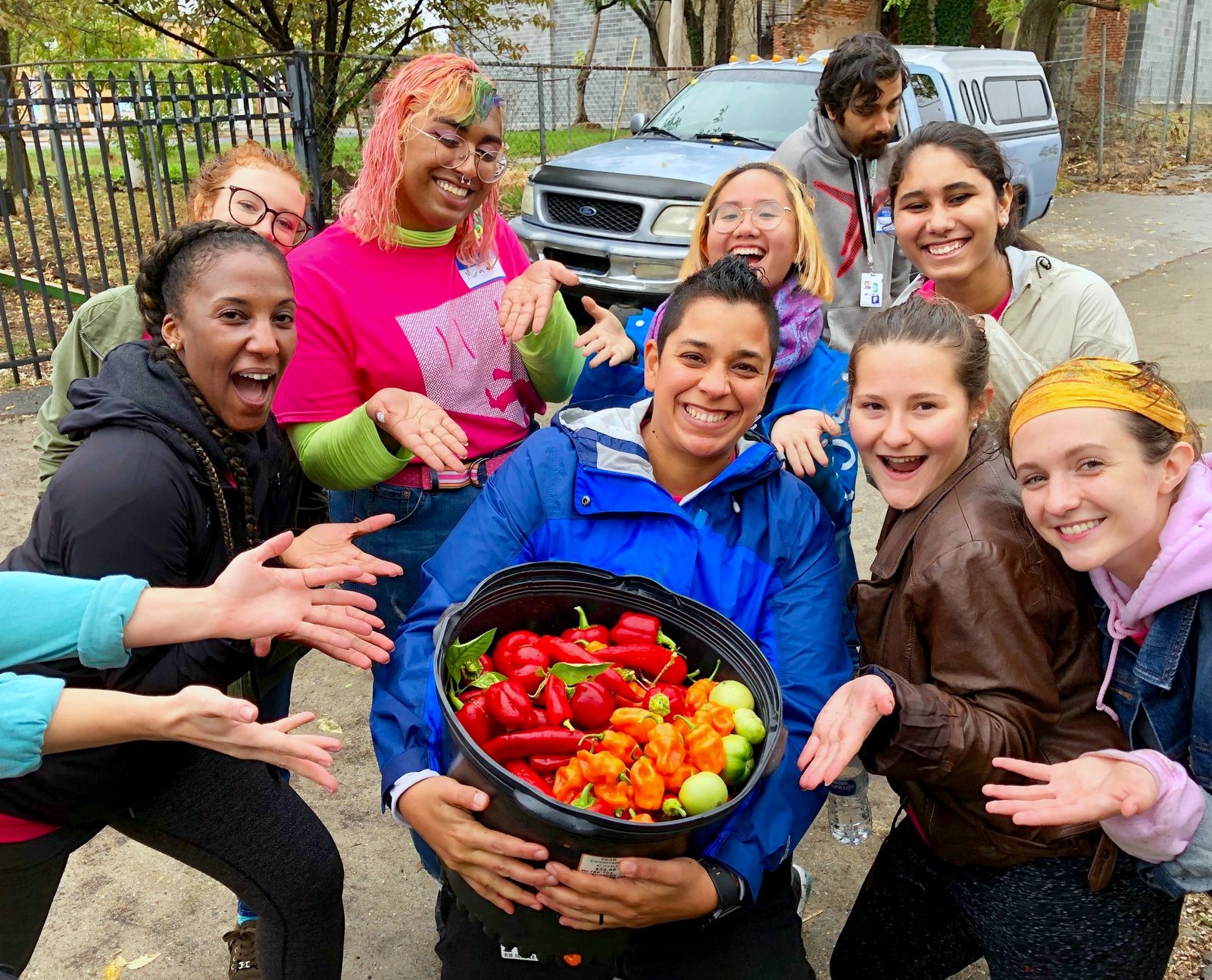 Volunteers from the MICA Center for Student Engagement show off the harvest last fall at Duncan Street Miracle Garden. (Facebook)

The weeds need to be pulled and the grass needs a cut. Broken glass, single-use surgical masks, to-go cups and other litter need to be picked up, especially on the part of the garden along North Avenue.

At 81, Sharpe can’t keep up with everything the way he used to.

He used to have four chickens, he said, “but they flew away.”

This summer, he’s been content with what the fruit trees have given him. He picked as many peaches as he wanted, but most have fallen onto the gravel.

He said over the years, many of his fellow gardeners have died, and not enough neighbors know about the garden.

“Last year I had more hands than I needed,” he said. “This year I could use a whole lot.” 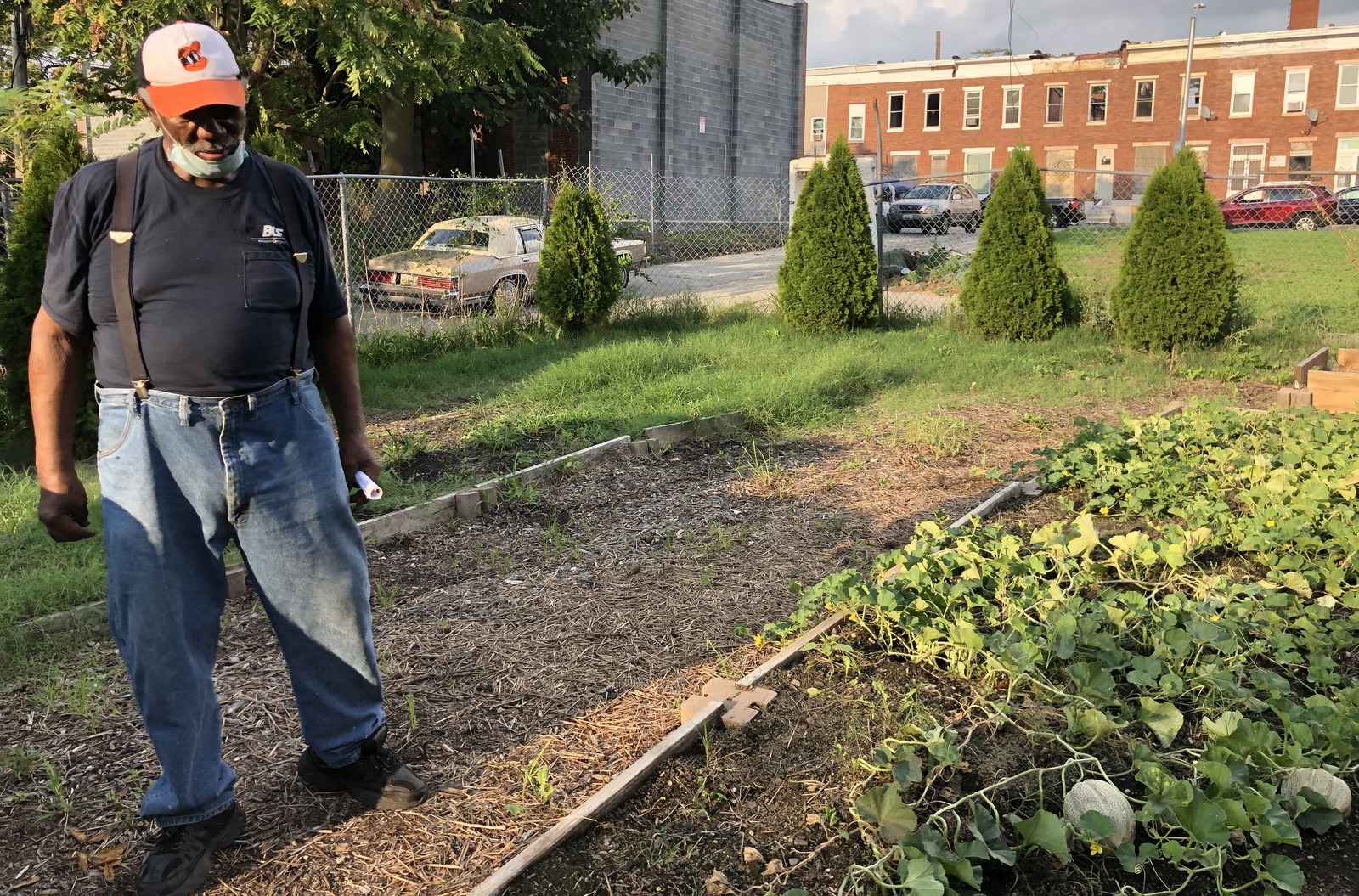 Lewis Sharpe beside the melon patch at the Duncan Street Miracle Garden. (Ian Round)

During the world wars, the government urged citizens to grow as much of their own food as possible. At one point, “victory gardens” became so popular and widespread that Americans sourced an estimated 40% of their vegetables from them.

Now, as the coronavirus pandemic has deepened the problem of food insecurity in the United States, victory gardens are regaining their popularity.

City Councilman Kristerfer Burnett and his chief of staff, Thyra Lowe, are leading that movement in Baltimore.

Lowe said a small amount of investment in farms such as Duncan Street Miracle Garden could dramatically improve public health and community morale, and stabilize the economy as well.

Residents of Broadway East, a neighborhood once stable with factory jobs, are now among the poorest in the city, and have some of the lowest access to fresh food.

“This is something we have to do if we want to keep existing,” Lowe said.

Lowe, 52, worked in emergency management for 25 years before coming to City Hall. She said the continued threat of Covid, combined with an ineffective federal response, put our food supply at risk.

“Nothing could be worse than food insecurity in the middle of a pandemic,” she told The Brew. “I’m beyond alarmed.”

Burnett held a hearing last week with gardeners and city agencies to discuss how to promote 21st Century victory gardens. Lowe said she aims to be a “conductor” between already-existing groups.

What Dollars Could do

Doris Minor-Terrell, president of the Broadway East Community Association, said she believes the idea could gain traction in her neighborhood.

“We have a lot of senior citizens who would like to take on the task of having a garden,” she said at the hearing. “What’s missing is the connections.” 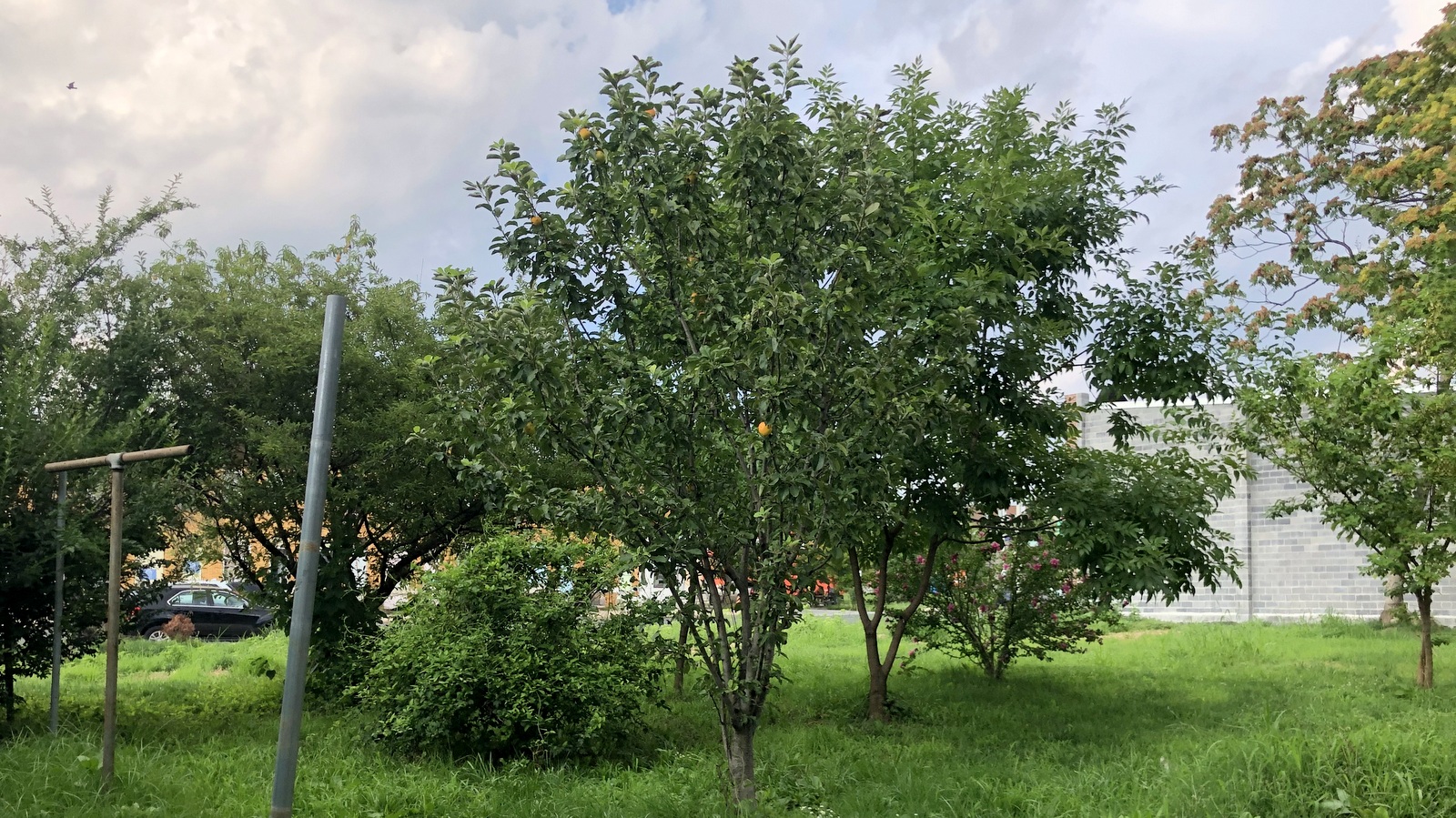 Pears are ripening at the Duncan Street Miracle Garden in Broadway East. (Ian Round)

Sharpe likes the sound of that. He’s full of ideas on how extra funds would help, beyond the obvious immediate needs of picking up trash and weeding.

He wants a playground for kids, a pavilion for seniors, livestock, perhaps, and another mural.

“To me, it’s all about the kids,” he said. “This place could be beautiful.”

To reach Mr. Sharpe or get involved in the garden, you can email Doris Minor-Terrell, Broadway East Community Association president: dminorterrell@gmail.com