A report issued today by the Office of the Inspector General provides more details about mismanagement at Baltimore’s Department of General Services, disclosing that a “high-level employee” approved nearly $130,000 in unauthorized services for a private towing company between 2014 and 2019.

The Brew can identify the employee as Robert J. “Rob” Schley, a 33-year city veteran, who was Superintendent of Fleet Operations until last January, when he was placed on leave, then told to retire.

The tow company that overcharged the city (also not named in today’s report) is Auto Barn Inc., according to procurement records.

In 2014, Auto Barn became the preferred provider for towing disabled city trucks and heavy equipment, winning an $800,000 chunk of a $1 million contract approved by the Board of Estimates.

Its bid specified flat rate prices for the first two hours of towing and either no charge or a reduced rate for subsequent services.

But invoices reviewed by the OIG showed that the invoices submitted to Fleet Management included mileage, taxes, tolls, labor, wait time and administrative fees not permitted under the contract.

Auto Barn’s president told the OIG that he “made multiple verbal agreements” with Fleet Management employees to permit the charges. Schley acknowledged that he approved invoices containing charges that should not have been included in the company’s flat rate.

“The employee [Schley] stated he believed the company’s billing practices were in accordance with the contract because the company ‘practiced integrity,’” the report noted.

So far this year, her office has published three critical reports about the division, with additional reports uncovering related poor practices at the Finance Department’s procurement office.

The investigation into General Services began last year. In January, Robert W. Gibson was escorted out of the George L. Winfield Fleet Maintenance Facility, forced to retire as division chief, along with his subordinate, Schley.

The Brew disclosed that the Inspector General had accused Gibson (unidentified in the publicly-released report) with conspiring with a southeast Baltimore repair shop to inflate the price of municipal vehicle repairs.

Holabird Fleet’s owner, Lawrence Ward, has denied all charges. He and his company are now facing a debarment proceeding.

If “convicted” by the Board of Estimates, Ward and his company would be barred from city contracts for at least five years.

On August 24, Ward and Holabird Enterprises of Maryland asked the Baltimore Circuit Court to dismiss the debarment proceeding because the city had not acted in a timely manner.

According to the OIG, Gibson and Schley serviced their private collection of classic cars at Holabird Fleet.

Gibson maintained a shipping container full of parts on the company’s premises, while Schley used Holabird’s equipment to restore his vintage Mustang.

In a separate report published in March, the OIG accused Gibson of circumventing the competitive bidding process for front-loaders needed by city agencies.

Gibson reportedly convened a private meeting that switched the contract from the low bidder to a vendor who threatened to protest the contract before the Board of Estimates. 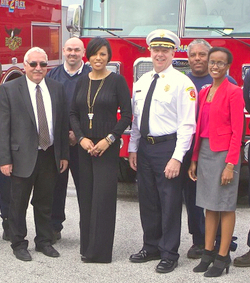 Though humiliated by his forced removal, Gibson got the last laugh.

The latest update of the city’s salary database shows that, despite his mandatory retirement midway through FY 2020, he was paid $373,111.19.

After his forced retirement in January, Gibson collected more than $223,000 in accrued vacation and sick time.

Schley did not fare as well.

Auto Barn’s bid price was not reflected in the bills that were approved by former Fleet Superintendent Rob Schley. (oig.baltimorecity.gov)

In the case of the Auto Barn, the company won the $800,000 towing contract despite being cited, just three months earlier, for letting unlicensed towers remove more than 200 vehicles from private properties.

The Baltimore City Trespass Towing Board had ordered the company to reimburse the owners of the improperly towed vehicles, and it suspended Auto Barn’s trespass towing license for 45 days.

That suspension, however, did not prevent the Board of Estimates from giving the company the truck towing contract on December 24, 2014.

According to today’s report, Auto Barn’s general manager claimed that he was not aware of the inflated invoices because he was not involved in the billing process.

The report points out that the general manager was listed as the point of contact on the company’s bid price sheet.

Phone messages left with Schley and at Auto Barn were not returned.

• To reach a Brew reporter: editors@baltimorebrew.com