In a poor, shrinking and dysfunctional city – a city known far more for its government scandals than its civic successes – some major structural government changes are finally being suggested as a remedy.

That’s because the power structure of city government here is absurdly imbalanced.

“If there is a government with a stronger mayor, I haven’t been able to find one,” said Matthew A. Crenson, professor emeritus in urban government and American political science at Johns Hopkins University.

Like others in the U.S. right now, Baltimoreans may be horrified to see the power that Donald Trump has galvanized in the office of the president. But do they realize that their own mayor has possessed for over a century nearly as much supreme power?

Imagine the head of an American city with:

• Legal authority to approve out-of-town trips for municipal employees, including his own staff, and to set an annual budget with next-to-zero input from the City Council.

• Sole authority to hike water and sewer rates – no matter how steep and unaffordable – for city residents who have no legal recourse to appeal.

If you live in Baltimore, your imagination doesn’t have to go far. Mayors here have a lot of power and – as far back as our memories go – they’ve liked it that way.

Four former mayors – brought together for a panel discussion by the Greater Baltimore Committee – said so last month.

“We should not lightly throw out the strong mayor system,” said Martin O’Malley, who served as mayor between 1999 and 2007.

Sheila Dixon, mayor from 2007 to 2010, also dismissed the idea of bringing in a city administrator or of shrinking the size of the Board of Estimates to take power away from the mayor, who controls the majority of votes.

These two suggestions have been put forth by City Council President Brandon Scott, who defeated Dixon and other mayoral candidates in the June Democratic primary.

Panelist Dixon warned that reducing the size of the Board of Estimates (in order to eliminate the mayor’s controlling votes) “will make business in the city, as well as city government, function a lot slower.”

“This will destroy many issues and priorities that need to be put in place,” said Dixon, who was convicted of embezzlement, pleaded guilty to perjury and resigned in 2010. 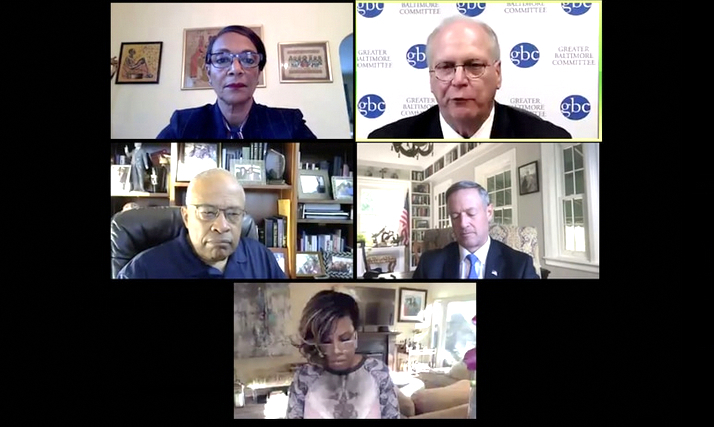 What the Mayor Wants

Let’s take a look at the legal structure they were defending so strongly.

The city’s charter establishing the Board of Estimates gives the mayor control of three out of five votes:

The mayor’s two appointees – the City Solicitor and the Director of the Department of Public Works – vote with their boss.

The City Council President and the Comptroller, both independently elected, have the two other votes.

Other cities have moved away from the strong mayor system, says Prof. Lawrence Brown.

Baltimore leaders give it a benign and wonky name: “a strong mayor system.”

But it really means: what the mayor wants, the mayor gets. And it’s been going on for 122 years. Even in a city with a grudge against change, that is pretty hard to swallow.

There may be no other city in the U.S with such a lopsided power structure, as JHU’s Crenson says. Lawrence Brown, former associate professor at Morgan State University, agrees.

Other cities have built more checks and balances into their governing structures.

“They’ve moved away from a strong mayor system,” said Brown, now a visiting associate professor at the University of Wisconsin.

Indeed, the power of Maryland’s other local governments is more balanced.

In Howard County, the County Council must approve all multi-year contracts, says Ray Wacks, who worked as budget director in both Howard County and Baltimore City. 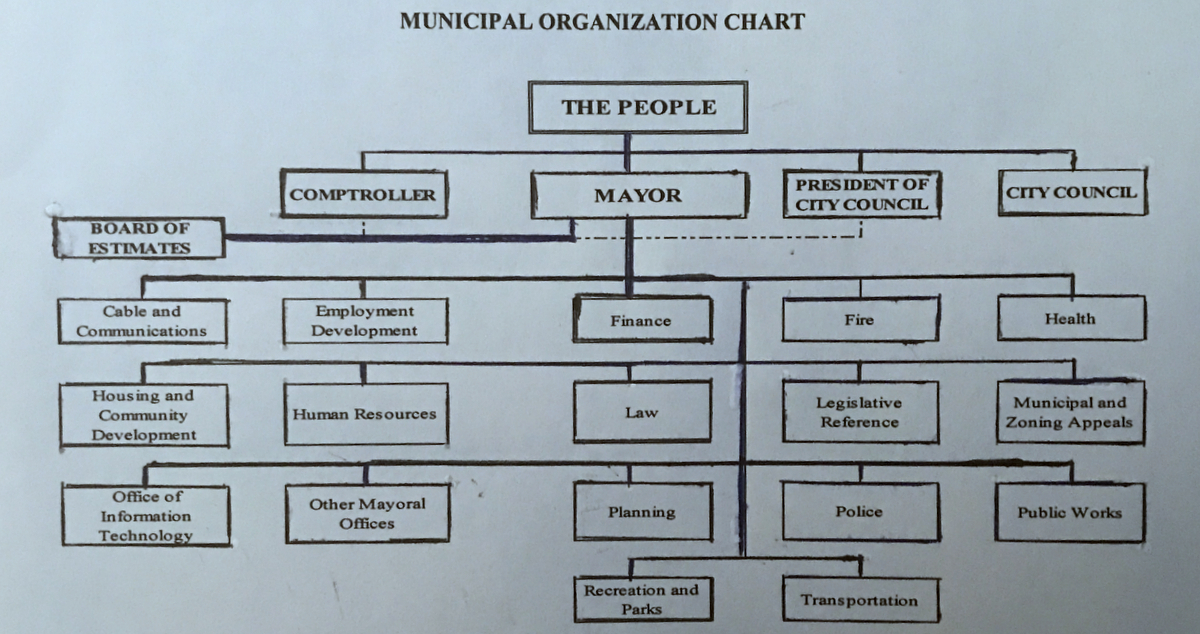 Under Baltimore’s system of governance, the mayor represents “the people,” while the City Council has little influence over the daily running of the city. (2020 Organization Chart)

Now there is a real chance to reconfigure the power dynamic on the Board of Estimates, to decentralize city government and make it more responsive to “the people” it claims to represent.

Scott – the presumptive next mayor after November’s general election – has vowed to get the City Council to pass a bill seeking a charter referendum to reconfigure the BOE and give the mayor less control.

A bill that would remove the mayor’s two appointees (leaving the three elected positions) hasn’t yet been voted out of committee.

The bill was stalled after the law department expressed concerns of a possible stalemate in voting if one member abstains due to a conflict, while the other two vote against each other.

The city’s lawyers also wrote that if any two members of a three-member board have a private conversation, they would be violating the state’s open meetings law.

Now, Scott says, he’s studying other cities’ forms of government to come up with a new way to balance power on the BOE.

The bill’s stagnation has raised concerns that Scott might be backing down from a campaign promise – a concern he says is unwarranted.

One way or another, Scott says he’s committed to changing the BOE.

“My word is my word. We know Baltimore has systems that are outdated and need to change,” he said, vowing to get a bill passed before he leaves the City Council, as expected, on December 8 to be sworn in as mayor.

That would delay a referendum to voters until November 2022, with a newly configured BOE convening 30 days later.

Hopefully, Scott will consult on matters of reorganization with Councilman Bill Henry, winner of the primary comptroller’s race and uncontested candidate for the general election.

Henry, who represents the 4th District, has heard suggestions for changing the balance of power at City Hall for the last 30 years.

Taking the mayor’s two appointees off the BOE may take power away from the mayor, but it doesn’t give power to the City Council, he says. “It only empowers the Council president and comptroller.”

Henry points out that the City Council President is elected by citywide voters, not by the Council itself. To give the body true power on the BOE, the city charter could be changed in one of several ways:

• Make the Council Vice President, currently elected by the Council instead of the voters, a member of the BOE.

• Reduce mayoral power by eliminating one – but not both – of the mayor’s appointees.

Henry has been trying for several years to give the City Council more control at City Hall.

After a few failed attempts, the Council this year passed his bill to allow its members to shift money around the mayor’s proposed budget. (Currently, the Council can only cut funds; it cannot move them from one program to another or increase the budget.)

The Council also overrode a veto by Mayor Bernard C. “Jack” Young that will allow the body to override future mayoral vetoes by fewer votes. These two charter amendments will go to voters next month.

The third elected member of the BOE will likely be State Delegate Nick Mosby, who won the City Council President’s primary in June. This gives him the role of president of the spending board.

While his role in any government reorganization will be pivotal, his voice has not been heard.

Mosby has not publicly expressed his viewpoint about reconfiguring the BOE.

And he has not responded to requests by The Brew for comment, despite contact through email, voicemail, text, Facebook and his campaign website.
____________________________
The Imperial Mayor Part 2: Transparency? Checks and balances? Those are for losers!