Children in Baltimore suffer from asthma at a rate more than double the national average, but the city’s response to this long-recognized  disparity has continued to fall short, according to a new report.

“The current ‘system’ for addressing uncontrolled asthma symptoms and asthma disparities in Baltimore City is inadequate and uncoordinated,” concludes Sarah LaFave of Johns Hopkins University, author of the study prepared for the Abell Foundation.

In Baltimore, 20% of children, or about 24,000 youth, have an asthma diagnosis – more than twice the national rate of 9%, the report noted.

She argues that Black children, living in historically redlined neighborhoods with concentrated poverty, inadequate housing and environmental pollutants, bear the brunt of the disease.

“Asthma disparities are a major contributor to poor educational, health and quality of life outcomes as well as to avoidable taxpayer spending,” LaFave wrote. 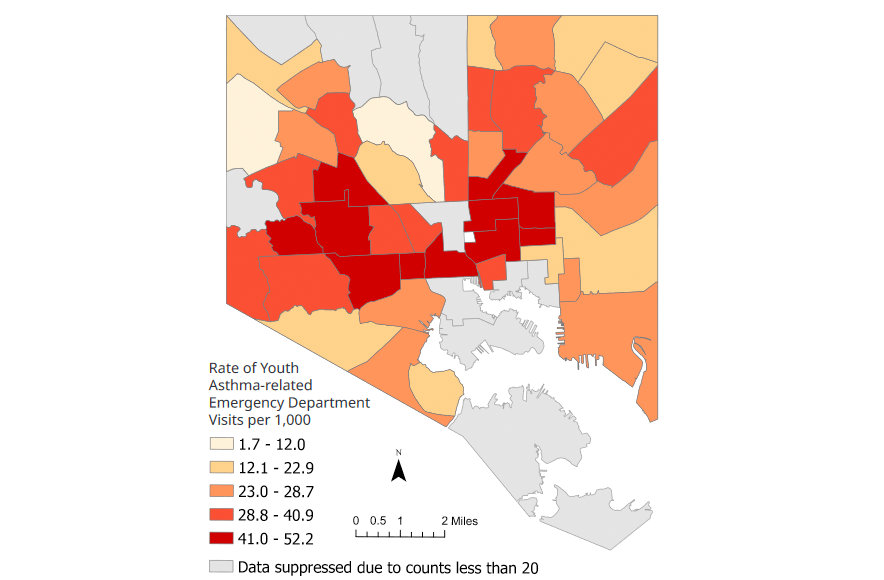 • Black children nationwide have three to five times higher risk of being sent to the emergency room or being hospitalized due to asthma than white children, LaFave noted.

• Black children are at risk of dying from asthma at a seven-fold rate, compared to white children, she also reported.

• 90% of pediatric asthma-related hospitalizations in Baltimore and 85% of emergency room visits were for children with Medicaid health insurance coverage.

A map of Baltimore in the report, with the location of 2016 youth emergency room visits for asthma, shows a familiar pattern.

It indicates that many of the “Black Butterfly” areas of Baltimore, as Lawrence Brown has named them, had between 41 and 52 emergency room visits per 1,000 youths.

In contrast, areas within the city’s “White L” neighborhoods often had – in total – less than 20 emergency room visits.

LaFave looked at ways the city can lower asthma rates by either implementing new prevention and treatment strategies or expanding or refining existing ones.

One approach addresses the fact that many children are not receiving prescribed doses of asthma medication for any number of possible reasons, including lack of access to transportation and to a consistent health care provider.

According to a 2015 review of pharmacy data, only 12% of patients from one of the city’s largest pediatric clinics filled their prescriptions for asthma medications in a three-month period.

One solution could be to create what’s called Directly Observed Therapy, a program in which schools and their nurses personally supervise children using their inhalers to ensure they receive medication.

A team of Johns Hopkins pediatric clinicians is currently implementing one such program, serving more than 1,500 students at a Baltimore school.

Project BREATHE, delivered through Hopkins’ Rales Health Center, led to a 70% decline in unscheduled use of albuterol as a rescue inhaler during the 2018-2019 school year. It decreased acute asthma visits to the school’s health center by 53%, LaFave said.

There is data to support other community-based approaches, such as the University of Maryland’s Breathmobile that provides testing, care and medication management.

But one study found that children who benefited from a Breathmobile visit did not experience a sustained improvement past the intervention period, a finding that led LaFave to conclude more study is needed to determine how best to keep children engaged with the program.

The report notes asthma symptoms are triggered by nitrogen oxide (NOx), though it doesn’t mention the city’s biggest industrial source of it, the BRESCO trash incinerator.

Children are more likely to experience asthma “exacerbations” in areas with high rates of housing code violations or if they are exposed to high levels of allergens or environmental triggers.

Children are more likely to experience asthma “exacerbations” if they live in areas with high rates of housing code violations or if they are exposed to high levels of allergens or environmental triggers in the home, the report stated.

More than 84% of homes of city children with asthma contain detectable levels of mouse allergens in bedroom dust and air samples.

City initiatives like the Health Department’s Community Asthma Program and the Green and the Healthy Homes Initiative (GHHI), which provides assessment, education, and in-home environmental remediation, have been successful.

But housing stability and poverty issues undermine the programs, the Abell study noted. Uncooperative or hard-to-reach landlords may not cooperate. Allergens in schools may be higher than those in the home.

“The Associated Press reports that Maryland’s public housing is the worst performing of any state’s in health and safety scores,” LaFave notes.

The report concludes that Baltimore and Maryland have the resources to close racial and economic gaps in asthma rates and calls on the city to reduce asthma-related emergency room visits by at least 30% within five years.

It also calls for:

• A citywide approach to pediatric asthma management that provides a battle plan that includes scaling up existing programs.

• Development of a centralized infrastructure for data monitoring and case management to track health care utilization and coordinate services for pediatric asthma.

• An Asthma Policy and Payment Summit, convened by city and state health officials, to determine a path forward for addressing financial barriers and coordination challenges. 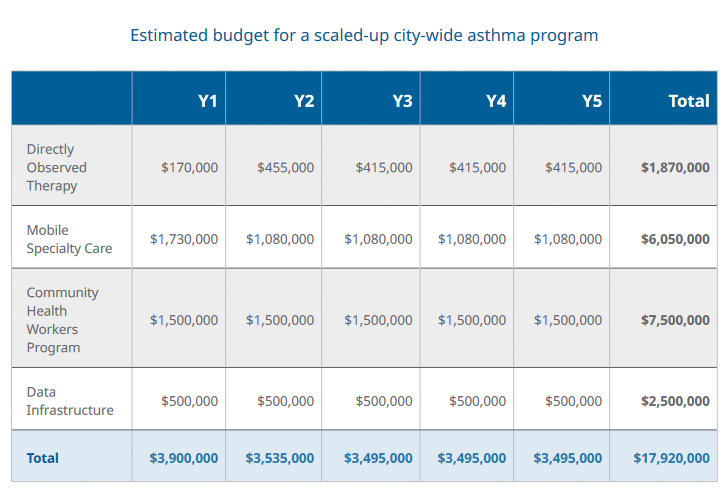 Cost of a coordinated approach to reducing pediatric asthma rates in Baltimore over five years. (abell.org)

Achieving the goal outlined in the report would cost nearly $18 million over five years.

But it would have significant social benefits by narrowing “the outcome gaps in quality of life, education and health for children living with asthma whose communities have experienced historical disinvestment.”