If the Johns Hopkins University is serious about saving energy and following best practices for sustainability, Stephanie Hulman asks, why would it tear down seven large rowhouses in Charles Village rather than recycle them for new uses?

If Hopkins wishes to teach its students about art and cultural heritage, why would it destroy 110-year-old buildings that are prime examples of Edwardian architecture?

And if the university wants to be sure its properties are accessible to disabled people, why couldn’t it challenge its students to come up with creative ways to make older buildings more accessible as a class project?

Those are just a few of the questions Hulman brought to a community meeting about Hopkins’ plans to knock down the rowhouses it owns at 5-19 West 29th Street, leaving in its wake an open “grassy area” – and nothing more – opposite Wyman Park Dell.

She came armed with facts and figures about how much debris the demolition would add to the landfill (1,848 tons, by her calculations) and spoke passionately about how much history would be lost, down to the original doorknobs.

After the meeting, organized by the Charles Village Civic Association and conducted via Zoom last Thursday, the local homeowner said she wasn’t happy with what she heard.

“I’m extremely upset,” she said. “I spend so much time and effort preserving and restoring my home, the thought that in 20 years, Hopkins could have bought my entire block piece by piece to tear it down, it just breaks my heart.”

She’s also alarmed by the quick timeline sought by the university and the way it has presented the demolition as a done deal. “There’s been no time for the community to discuss this.” 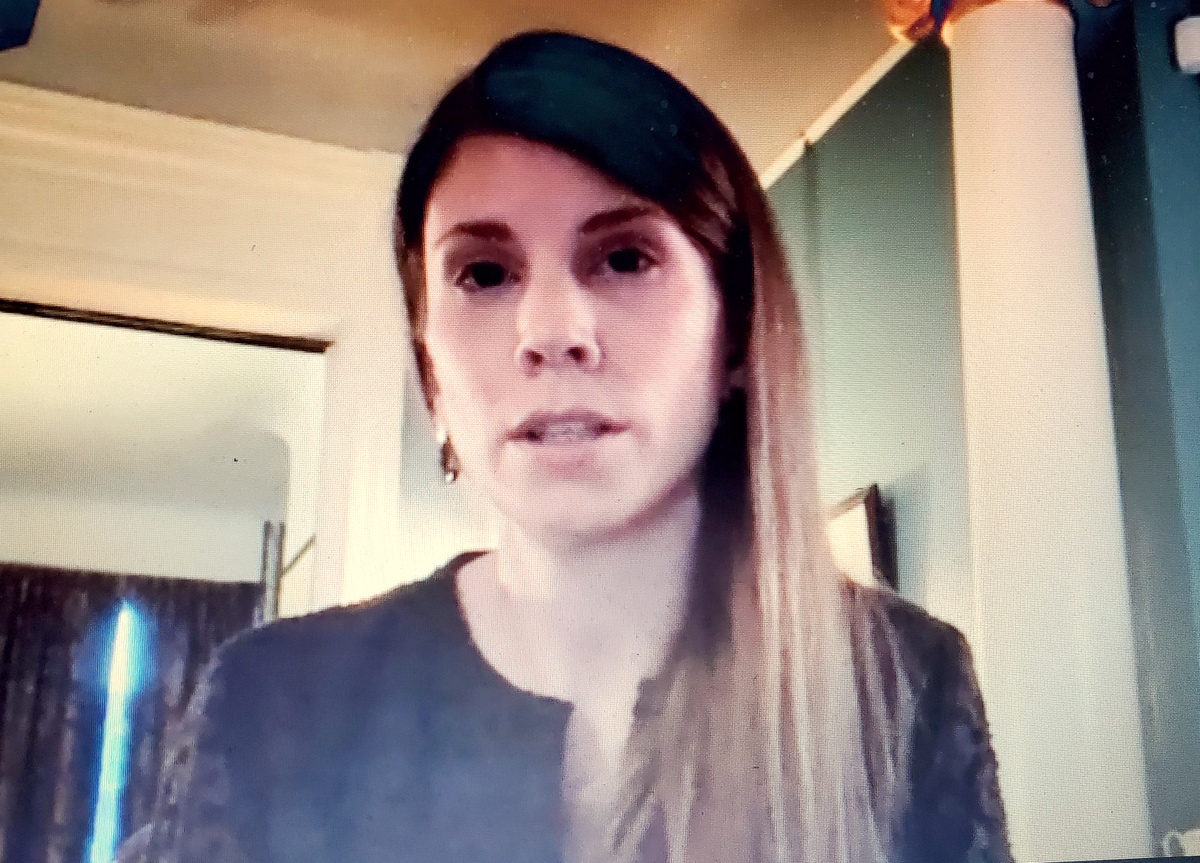 “There’s been no time for the community to discuss this,” says Charles Village resident Stephanie Hulman. (Zoom)

Chris Hyde was equally upset after he heard Hopkins representatives mention graffiti and rats as two reasons for tearing the houses down.

“Gimme a break,” he wrote in the comments section while the online meeting was underway. “You’re demolishing these houses because of graffiti and rats? If that’s your case, then we should demolish the entire city of Baltimore!”

A historic preservationist, Hyde said the 29th Street houses still look good to him. “Quite frankly, these are some of the nicest vacant houses I’ve seen – posh, really.” 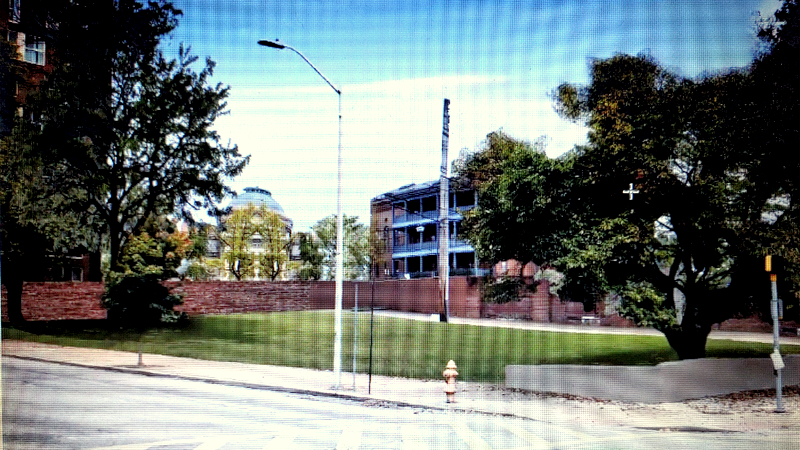 A rendering of the grassy lot that Hopkins proposes in place of the seven rowhouses it owns. (Johns Hopkins University, Ed Gunts) 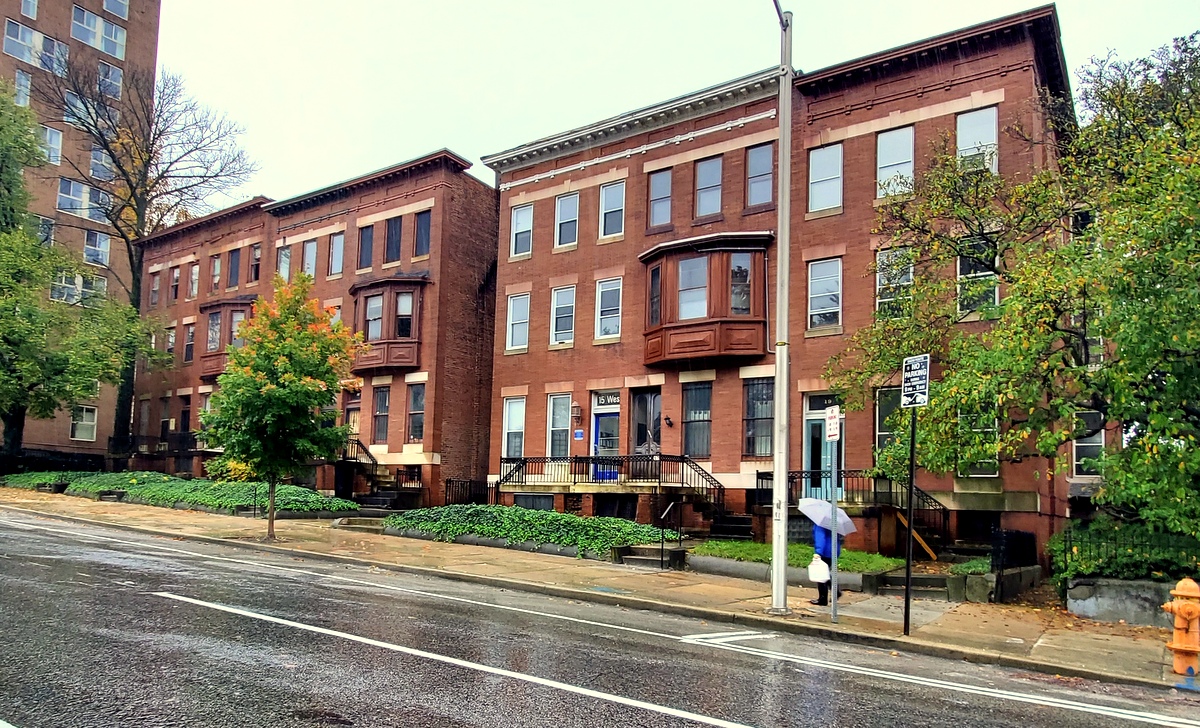 The Zoom session was billed as a “community input meeting” to brief the residents about Hopkins’ demolition plans, as opposed to a meeting to present options and see what the community would prefer.

The “grassy area” plan was the only option shown at the meeting and was presented as a fait accompli.

Coretta Bennett, director of operations, design and construction for Hopkins, said the university intends to raze the houses over a four-month period starting in December. After that, “we do not know what the future holds,” said Lee Coyle, Hopkins’ senior director of planning and architecture.

“We cannot predict a time because obviously the idea of constructing something else on this site requires not only a program and the need, but the funds, the money to do it, and that is not the case today,” Coyle said.

Hopkins has no immediate plans for Dell House, a 14-story apartment building it owns just east of the seven houses at Charles and 29th streets.

The building, which has been vacant for years, will not be torn down as part of the grassy area project, the community was told. 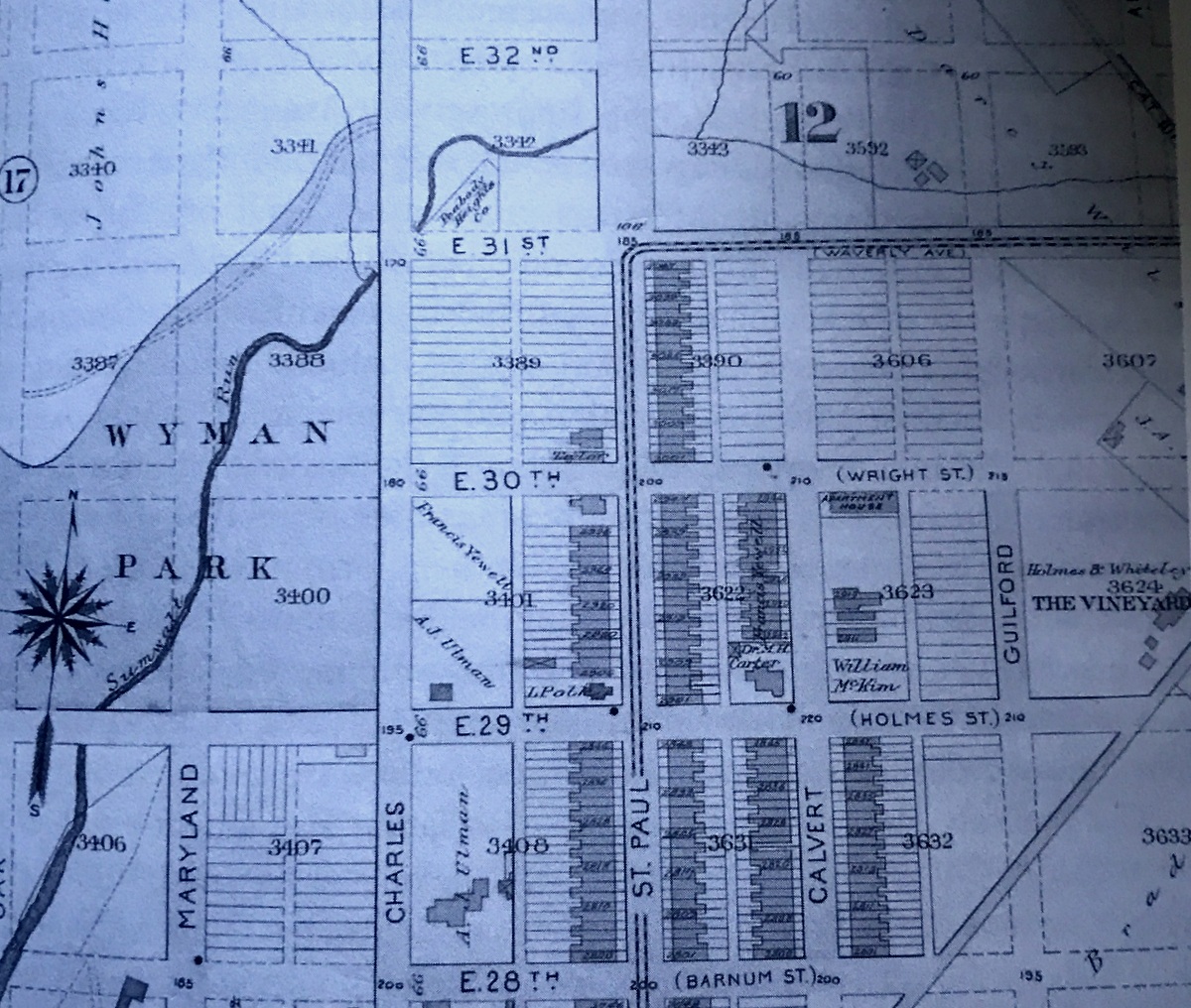 A 1906 map shows seven deep lots at 29th Street and Maryland Avenue set aside for rowhouses across from Wyman Park Dell. The houses were built in 1911. (A Brief History of Charles Village, 2009)

The seven rowhouses were designed by John R. Forsythe, a popular Baltimore architect who later designed the art deco Pimlico Theatre near the Pimlico Race Course.

They were erected in 1911 by James T. Miller. Each was advertised as luxury housing priced at $9,500, a considerable sum for the time, according to A Brief History of Charles Village.

Tammy Hawley, a spokesperson for the Baltimore housing department, says the university has applied for the demolition permits, but they have not yet been issued. The buildings are not protected by local landmark status.

Most of the meeting consisted of Charles Village residents asking questions about the plan and Hopkins representatives trying to provide answers.

To explain why Hopkins wants to tear down the Edwardian houses rather than sell or re-purpose them, representatives pointed to their condition, which they described as severely deteriorated and uninhabitable.

The roofs of three of the buildings are collapsing, said Hopkins asset manager Suzanne Kozarski, and the properties have become a magnet for homeless people, who have been breaking in.

“I don’t think that the intention initially was to have the properties in the condition and the state that they are in now”  – JHU’s Coretta Bennett.

Asked how properties owned by Hopkins could get so run down so close to its Homewood campus, at least two of the representatives said they couldn’t speak to what happened before they were hired.

“Most of us on this call have not been at the Johns Hopkins University for a long period of time,” Coyle said. 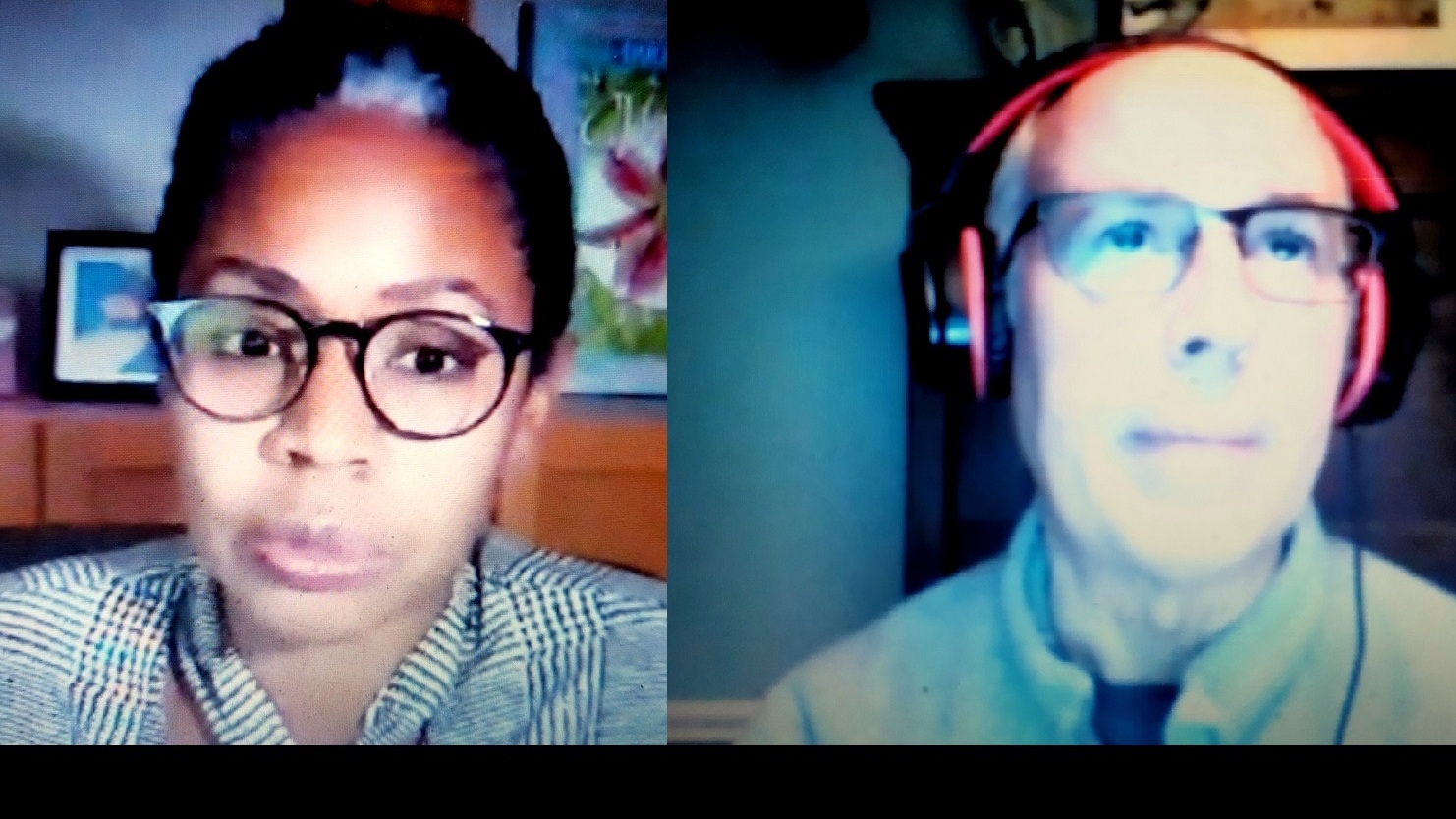 “You guys have money”

Six of the seven buildings have been under Hopkins’ ownership since 2006, and Ross Fischer, director of asset management, said they had been in partial use for a number of years and didn’t start deteriorating until recently.

“The downturn in condition really happened over the last year, that we’ve really been noticing it,” said Fischer, who noted that he, too, has worked for Hopkins for just over a year.

“That’s when Suzanne and I got involved,” he said, “and have worked diligently to get those units stabilized from a safety standpoint. That, coupled with leadership decisions that moved forward with the demolition, is kind of where we sit today.”

“So JHU bought a house 19 years ago and then proceeded to do nothing and let the house crumble just so you could tear it down?” another resident asked. “I know you guys have money and the ability to maintain properties.”

Selling the houses is not the direction “senior leadership” decided to take, the community is told.

“I don’t think that the intention initially was to have the properties in the condition and the state that they are in now,” Bennett said. “As we all know, deterioration happens over time and there are a variety of reasons.”

“I can’t understand an academic institution that has Master’s programs in cultural heritage, preservation and museum studies letting historic properties deteriorate like that,” Hulman said. “I don’t get that.”

“I don’t want to get into semantics,” Bennett responded, “but I know these structures are not landmarked and classified as historic structures.”

Asked why the buildings couldn’t be fixed up, Fischer said their size and configuration limits how they can be used.

“Putting the condition aside, they’re very limiting just from a size standpoint,” he said. “If we were to rehab them, that would be a substantial, substantial investment and then we’d still be sitting with the exact same size structure.”

They also aren’t accessible to people in wheelchairs because they have multiple levels and no elevators that would help the buildings comply with the Americans with Disabilities Act, Coyle said.

Asked why Hopkins doesn’t put the houses on the market if it can’t use them, the representatives said, without elaboration, this is not the direction that “senior leadership” of the university decided to take.

Asked what the grassy field will be used for, Jennifer Mielke, director of local and community affairs, said it might be a good place for Charles Village to have festivals or other neighborhood events “if we ever get past COVID.”

While dog walkers probably wouldn’t be chased away, Hopkins would not want to see the land become an encampment site for homeless people, she added.

After slightly more than an hour, CVCA President Miller Roberts III ended the meeting. There was a suggestion that Hopkins representatives should meet with Remington residents about the demolition, too.

Hulman said she never thought Charles Village needed to be designated a local historic district to prevent unwanted demolition. But now, she said, she thinks that might be worth considering.

• Mark Reutter contributed to this article.