Critics on social media called the purchase an example of the city’s misplaced priorities, citing the department’s half-billion annual budget and abuses of civil liberties revealed by the Gun Trace Task Force and other scandals.

Today the $112,893 request for the “combat proven” guns is back on track, likely to be approved by the board without anyone the wiser.

That’s because the order is listed on the board’s “routine agenda,” which cloaks the expenditure among dozens of other spending items in a blanket vote taken by the panel.

Unless the expenditure is transferred this morning to the “non-routine agenda,” it will be approved without any discussion – or even public mention.

City Council President Brandon Scott – to be sworn in as Baltimore’s next mayor next month after winning the general election yesterday – can place the contract on the non-routine agenda, thus open to discussion, but appears not to have done so.

His weekly memo did not list the contract in the non-routine category. His spokesperson could not be reached for comment last night.

Back in September, Scott said that “he would need a pretty good explanation” about why police needed the new guns, adding that his focus is on “re-imagining public safety and responsibly reducing BPD’s budget over time.”

UPDATE:  With the words “I move to approve all items on the routine agenda,” Scott and the rest of the board unanimously awarded the rifle contract to a Colorado gun shop named below. 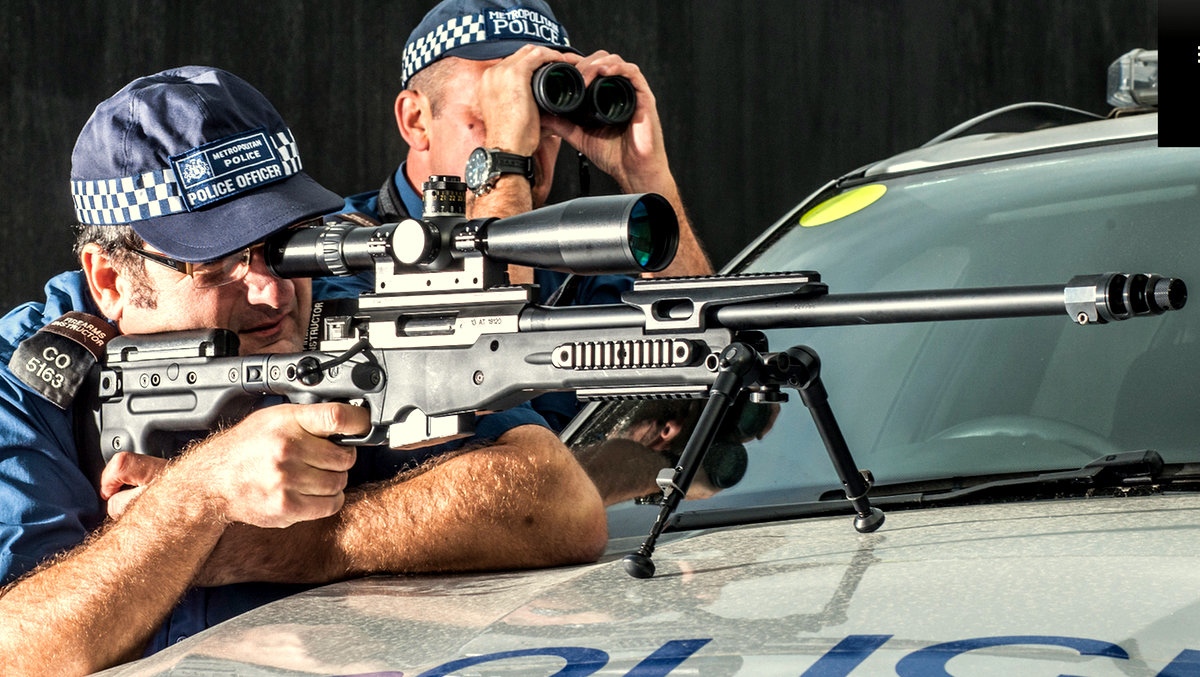 A mockup of officers deploying an AT308 sniper rifle by the gun’s British manufacturer, Accuracy International Ltd. (accuracyinternational.com)

The twelve AT308 rifles will replace an equal number of 10-year-old Remington sniper rifles that, according to the police, have fired off 5,000 rounds in practice and now are approaching obsolescence.

Like the old guns, the new guns will be used for training and practice by the SWAT Emergency Response Team, but also could be deployed for the following:

• barricade scenes (even though the SWAT team never used the Remington rifles in the field).

• presidential and high-level dignitary visits to Baltimore “where the BPD works closely with the U.S. Secret Service and other federal agencies on security.”

• large-scale sporting, entertainment and cultural events that could be terrorist targets.

“BPD believes that it is important to be as prepared as possible and have either of these types of rifles [the old Remingtons or the new AT308s] and not need them rather than need them and not have them,” says the board agenda.

The department further notes that in reaching the end of their useful life, the Remington rifles are less accurate than newer rifles.

What’s more, the SWAT team practices with the State Police and teams from Anne Arundel, Howard and Baltimore counties that generally have more modern equipment.

The guns will be sold through Mile High Shooting Accessories, a Colorado gun shop that will accept BPD’s old rifles, with the trade-in value discounted from the purchase price.

The contract for the new sniper rifles will be sole sourced to Mile High Shooting Accessories, a gun shop outside of Denver, Colorado. (Board of Estimates, November 4, 2020, page 42)