A new law guaranteeing Baltimore renters the right to a lawyer in eviction cases is being hailed as a lifesaver, providing resources to keep people from losing their homes during a surging pandemic and historic economic downturn.

“So many people we work with are scared to make demands on their landlord because the landlord may retaliate with an eviction action,” said Tiffany Ralph, secretary of the Bolton House Residents Association. “Right to counsel gives support to residents who stand up for their right to live in safe, healthy housing.”

But while the needs amid Covid-19 are immediate, the bill signed into law last week by outgoing mayor Bernard C. “Jack” Young will take months – and perhaps years – to fully implement.

It requires the Department of Housing and Community Development to contract with nonprofit legal service groups to provide an attorney to tenants in eviction cases.

But the timeline is unclear.

A program providing lawyers to all persons covered under the bill must be “phased-in during a period of time not to exceed four years.” But the text also says the legislation is to go into effect within 120 days.

“I’m obviously concerned that the bill allows a four-year period,” said Matt Hill, of the Public Justice Center. “We look forward to working with HCD to implement it as quickly as possible.”

The legislation aims to level the playing field in rent court, where landlords almost always have an agent or lawyer representing them.

Asked how rapidly HCD plans to move, spokeswoman Tammy Hawley did not provide a specific timetable.

“We will be working through the necessary components with city agencies and working to identify funding sources in support of an ongoing program,” she said.

She pointed out that the agency is already providing some additional resources to help renters facing eviction and other landlord-tenant issues, naming a half-dozen nonprofit groups, including the Pro Bono Resource Center of Maryland and the Homeless Persons Representation Project.

Bill 20-0625, making Baltimore one of a few U.S. cities to recognize the tenant’s right to counsel in eviction cases, was a long-sought victory for housing advocates.

In addition to guaranteeing renters legal representation, it calls for:

• Requiring yearly reports and hearings on implementation of the right to counsel.

The legislation aims to level the playing field in rent court, where landlords almost always have an agent or lawyer representing them.

A whopping 96% of Baltimore landlords were found to have lawyers in their eviction cases, compared to 1% of tenants, according to an Abell Foundation report released last May.

Supporters also note that an estimated 80% of renters have a reasonable defense to make. But without counsel, only 8% of them successfully raise a defense based on conditions of disrepair, according to the coalition group, Baltimore Renters United.

The cost of the new legislation will depend on how it is implemented.

For tenants who earn less than 50% of the Baltimore Area Median Income, providing counsel to them in eviction cases would require an annual investment of $5.7 million, the Abell study estimated.

On the other hand, by trimming the need for emergency shelter, Medicaid and other costs, stopping unwarranted evictions could result in a savings of $17.5 million for the city and $18.1 million for the state. An estimated 5,700 households would be prevented from displacement.

Molly Amster, the local director of Jews United for Justice, said she recognizes the challenge of establishing the program.

Baltimore could follow the lead of other cities that have used the first year as a planning period before setting up criteria for eligibility, she said.

“I think this will still be extremely helpful to tenants, and I’m not concerned about the implementation timeline at this time,” added Carisa Hatfield, an attorney with the Homeless Persons Representation Project.

If the city does implement the bill on a citywide scale, as opposed to using specific zip codes, “it would probably be a relatively slow implementation period,” Hatfield said. 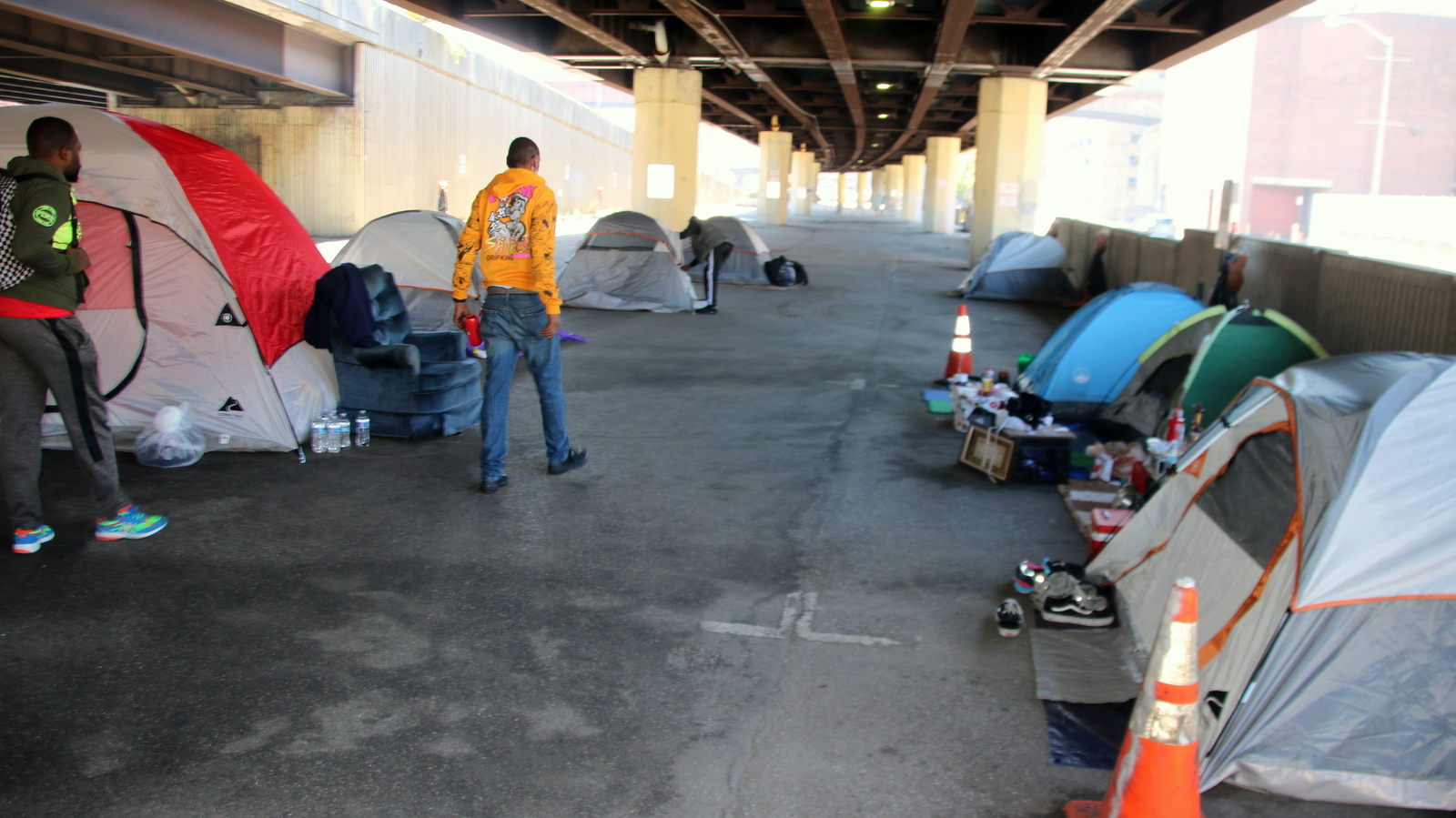 The city planned last month to raze an encampment of about 30 people living under the Jones Falls Expressway, but dropped the plan after a public outcry. (Louis Krauss)

While her group and others are currently representing some renters at risk for eviction, advocates said it isn’t enough.

“I know the city has allocated additional resources for legal counsel, but it’s not sufficient to providing every renter with counsel,” Amster said.

She said she is hoping for a speedy implementation of the program’s community education component.

“If people don’t know they can access counsel, they won’t,” she noted. 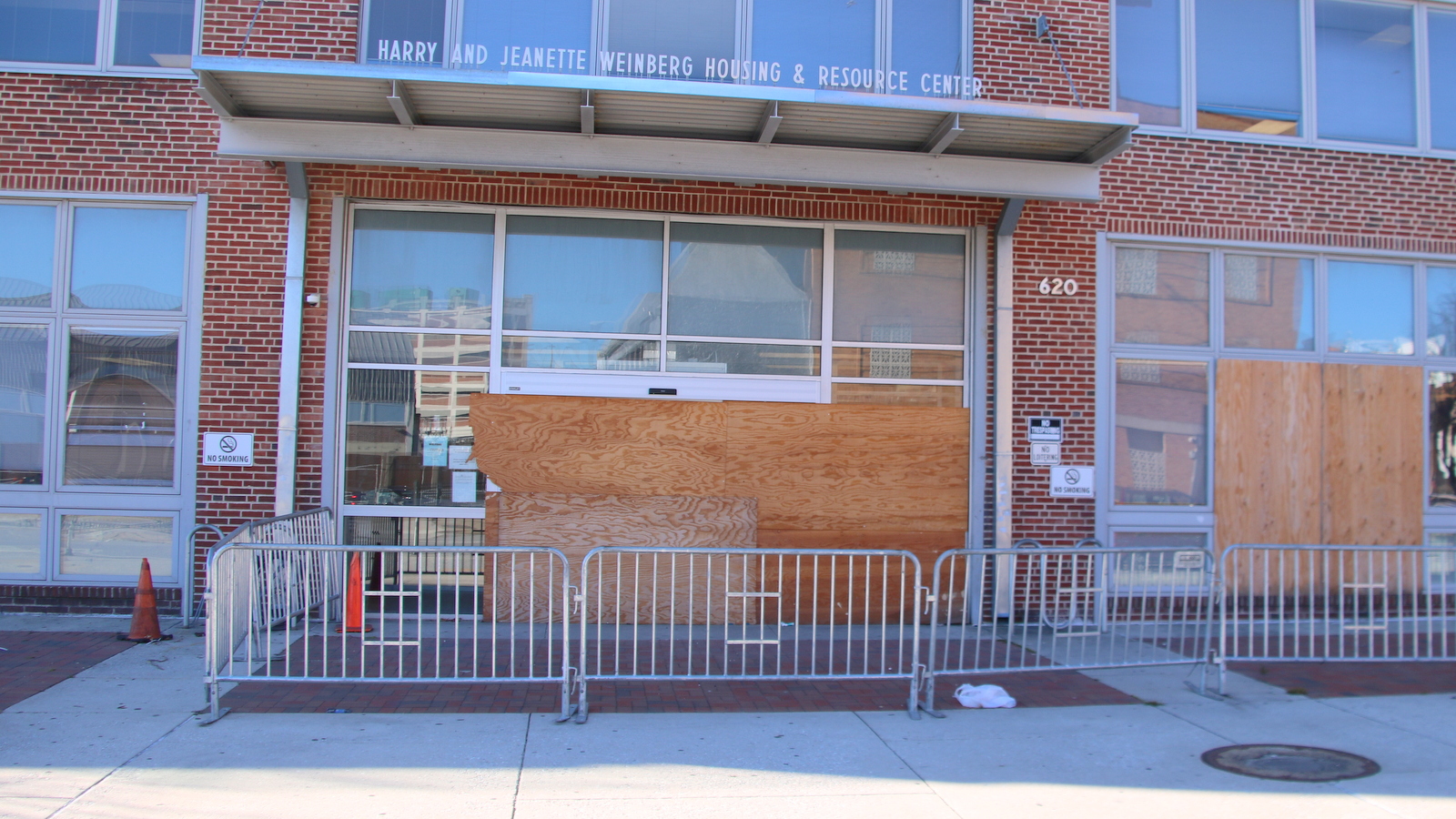 Baltimore’s main shelter on the Fallsway has been closed since the spring, when people living there tested positive for Covid-19. (Fern Shen)

Despite the slowdown in court proceedings and a federal moratorium on evictions declared at the start of the pandemic, evictions have been taking place.

The sheriff’s office reports that more than 537 families in Baltimore were evicted from August through November alone, not including families illegally evicted by their landlords, according to Baltimore Renters United.

Pre-pandemic, many more were being evicted. In 2019, there were 6,519 evictions in the city, said Zafar Shah, an attorney with the Public Justice Center, citing data from the Baltimore Eviction Study.

“Of course, the problem isn’t a comparative one,” Shah told The Brew. “We’re talking about 112 evictions per month during a pandemic when everyone assumed there were policies in place to prevent that.”

“We’re talking about 112 evictions per month during a pandemic when everyone assumed there were policies in place to prevent that”  – Zafar Shah of the Public Justice Center.

During a pandemic, any evictions are a concern because there are so few safe options.

“What we’re finding is they’re very limited in what they can do after being evicted and put on the street,” Hatfield said.

“They can go to family or friends, which can increase the spread. And if they can’t stay with family they’ll stay in a congregate facility, which the CDC has advised against as being unsafe.”