Two weeks before today’s hearing at the Baltimore Liquor Board, more than a dozen Fells Point residents, who were scheduled to testify against The Choptank, received a letter from the restaurant’s attorney.

Accusing them of protesting the renewal of the restaurant’s liquor license “under false pretenses,” the letter warned that “the Choptank intends to take all necessary steps to protect its legal rights, including filing suit against you.”

“Preserve all evidence,” advised attorney Scott H. Marder in his January 15 letter, describing a laundry list of the evidence to be preserved “including, but not limited to, PDF, Word, Email, etc.”

Those who did not follow these instructions, Marder wrote, could be subject to “sanctions for spoilation of evidence.”

“Please govern yourself accordingly,” the letter warned in closing.

All 15 people who formally complained about the Fells Point establishment appear to have received the letter, said Becky Witt, the Community Law Center attorney who represented them today before the board.

“It has caused a lot of fear and anxiety in the people I talked to,” said Witt, who was representing the Fells Point Residents Association.

At the end of today’s virtual hearing, in which only three of the 15 people testified against the Choptank, the board ruled unanimously in favor of the licensee. 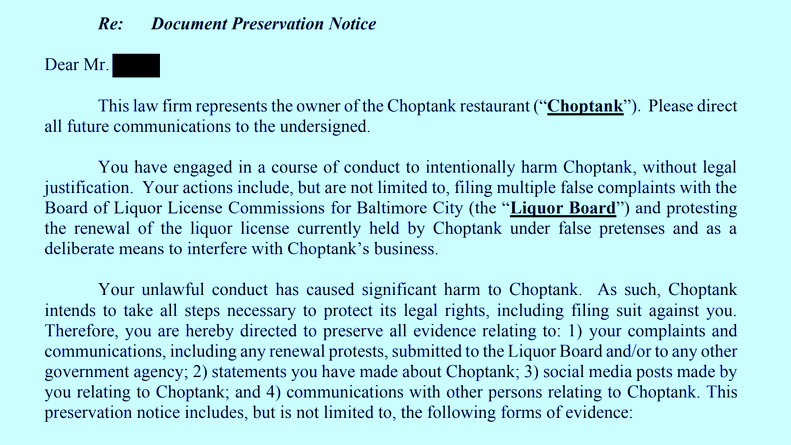 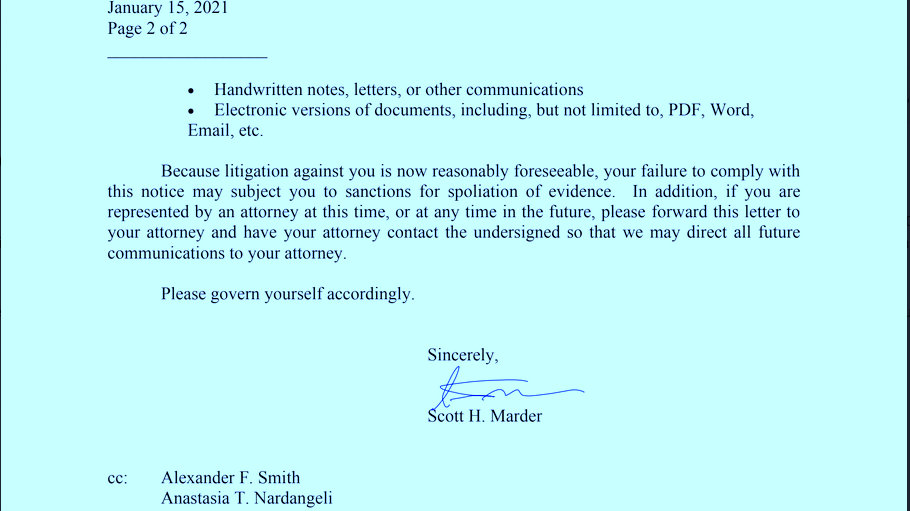 Liquor Board Chairman Albert J. Matricciani Jr. said he could not find any “substantial evidence” to support the claims cited in the protest.

He and the two other commissioners noted that The Choptank, owned by Atlas Restaurant Group founder and president Alex Smith, has received no Liquor Board violations for noise or other infractions since it opened, even though residents have called in more than two dozen complaints to the 311 system.

When Choptank opponent David Martz tried to testify about what he had received from Smith’s attorney – “it was a very threatening letter for, basically, signing a petition” – Matricciani cut him off.

It was the second time in the past year that a Baltimore business owner used legal action, or the threat of legal action, against residents criticizing their project through the public hearing process.

When a Choptank opponent today tried to testify about receiving the attorney’s letter, board chairman Matricciani cut him off.

Marder did not respond to a call from The Brew asking him what falsehoods on the part of the petitioners he was alleging.

Smith, who was copied on Marder’s letter, also did not respond.

Many Complaints, No Violations

Much of the case that Witt presented today revolved around the assurances that Smith made to the community when the restaurant group applied to the Liquor Board to open The Choptank at 1641 Aliceanna Street.

Appearing before the board three years ago, Smith promised “a family-oriented restaurant” that wouldn’t play music outdoors. He said the sounds coming from his restaurant would consist of casual conversation and “people pounding crabs with mallets.”

But noise turned out to be a major concern for the complainants after the Choptank installed 15 speakers around its building and played music they said could be heard far beyond its premises, often past midnight.

The music was so loud that “you have to almost yell to talk to people around you,” said Mara O’Connell, of Shakespeare Street. “it’s not the way Fells Point does things. We’re neighbors.” 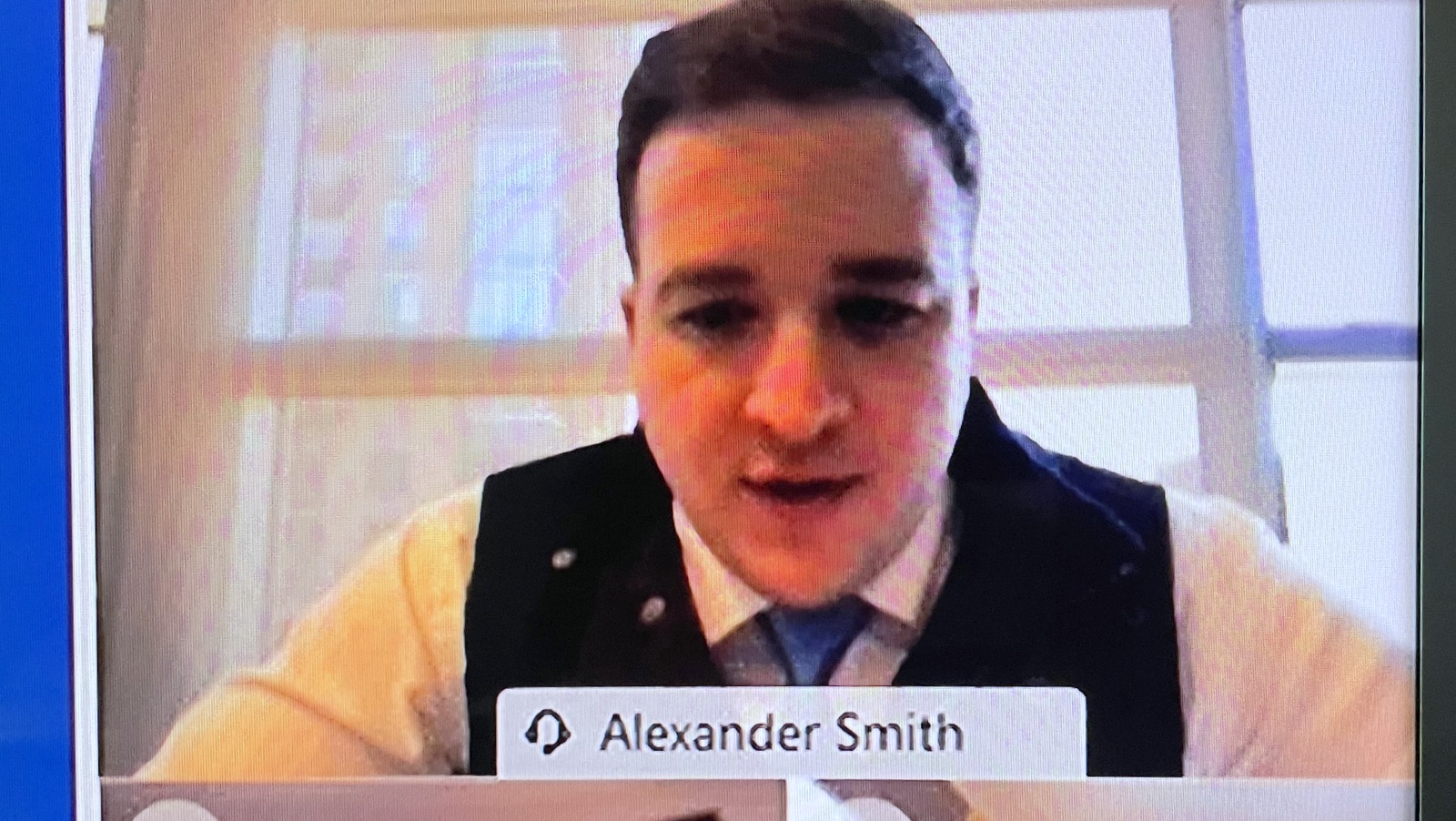 Alex Smith noted that while The Choptank has received numerous 311 noise complaints, it has never received a violation from the Liquor Board.

Witt said the protestors’ argument largely boils down to a matter of defining when live music is “indoors” and when it is “outdoors.”

Witt said the community tried to make its concerns known to the Choptank through in-person meetings and other forms of complaint.

She said the community even drafted a memorandum of understanding between Atlas Group and its neighbors that would have spelled out terms of operation.

Such agreements are common before bars and restaurants open with live entertainment, but Atlas, she said, didn’t respond.

Glenn Moomau, a musician who lives in the 700 block of South Broadway and signed the protest petition, testified that he lives on the same block as The Choptank and can hear music late at night even when he’s in his bedroom at the back of his house.

He said he and Martz, the former president of the Fells Point Residents Association, asked Choptank’s part owner, Billy Tserkis, to honor Smith’s original pledge to the Liquor Board and turn off the outside music, but nothing changed.

Having lived in the heart of an entertainment district for decades, Moomau said he accepted the noise that comes with it, but not at the levels produced by The Choptank.

“I’m not opposed to Fells Point’s culture of taverns and live music,” he said. “Rather, I’m opposed to businesses that make explicit promises to get a liquor license and then break those promises.”

“I’m opposed to businesses that make explicit promises to get a liquor license and then break those promises”  – Glenn Moomau.

Martz told the board that when Smith met with the residents association in 2018 to seek its support for the restaurant, Smith proposed “acoustic music” and “no more than two performers on stage” near the front door. “He never promised outdoor speakers,” Martz said.

Under questioning by Marder, Martz acknowledged that Smith did respond to the proposed MOU, which asked for removal of the outside speakers.

He said Smith came back with a counterproposal that wasn’t possible for the residents association to fulfill.

“He requested that all other speakers in Fells Point be removed,” Martz said. “It was out of our control.” 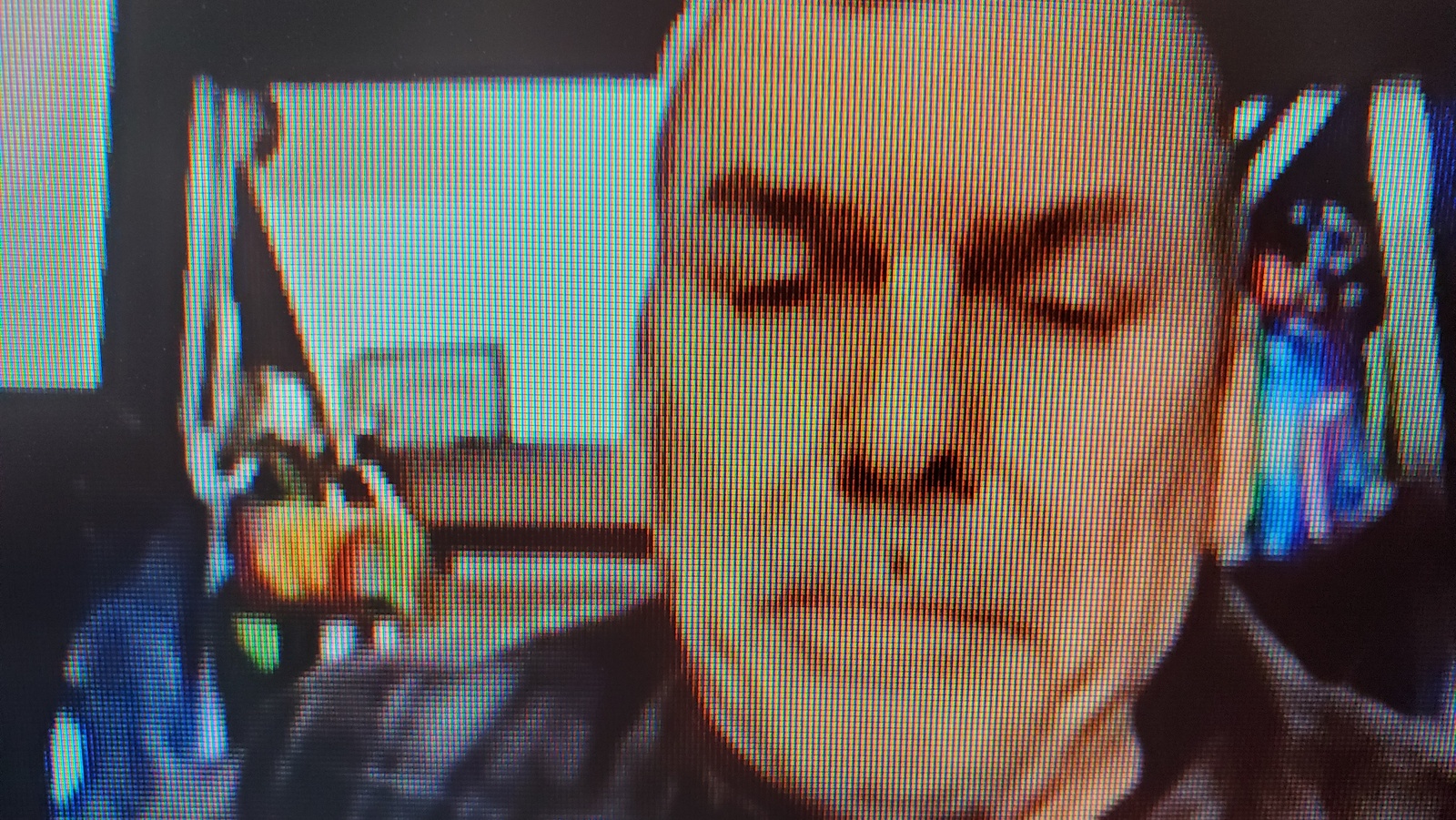 Glenn Moomau said noise from The Choptank is beyond what is normal even for Fells Point.

“People are there to dine”

Smith repeated that point at today’s hearing, noting that other Fells Point establishments have speakers outside or that can be heard through open doors.

He acknowledged that the Choptank had installed outdoor speakers, but said they aren’t very powerful and weren’t meant for live performances.

“First off, we don’t have an outdoor subwoofer,” he said.

“There’s only so much power that 15 eight-inch speakers can generate, with no subwoofer, no amplifier, no tower speakers”  – Alex Smith.

“It’s a family-oriented crowd,” he said. “At nighttime, it becomes a drinking crowd, of course, because it’s Fells Point. But people are there to dine.”

He said his rule is not to play music that’s so loud people can’t hear themselves talk. He said he disagrees that having musicians indoors and then playing their music over speakers outdoors is the same as having live music outdoors.

“There’s only so much power that 15 eight-inch speakers can generate, with no subwoofer, no amplifier, no tower speakers. We don’t have any of that out there,” he said. “To say that live music inside is live music outside is ridiculous.”

Marder suggested Moomau has a conflict of interest because his wife is a partial owner of the Penny Black, a bar and dining spot two blocks away. Moomau said the two aren’t competitors because Penny Black “serves a completely different clientele.”

Another intimation of conflict came when Marder put forth Darin Mislan, owner of the nearby Admiral’s Cup, as a witness.

Under questioning by Witt, Mislan acknowledged that he recently became a business partner of Smith’s since his bar was acquired by the Atlas group.

But Mislan said his testimony in support of The Choptank came “under no duress.”

Toward the end of the meeting, Witt said that if the board does renew the Choptank’s license, the community would like it to insist that Smith keep “the promises that were made” about outdoor music when he applied for the license in 2018.

Matricciani advised both sides to negotiate, chiding Smith for his stance that “doesn’t strike me as the most reasonable way to approach community relations.”

“When we had this hearing before the board early on, I was promised that they were going to make every effort to work with the community to resolve these issues,” he said.

He urged the two sides to work with Liquor Board staff to resolve their issues, so “maybe we won’t have to go through this again every year.”

Reached by The Brew, City Councilman Zeke Cohen said “we expect bars and restaurants to be good neighbors within Fells Point.”

“My office will be paying close attention to noise issues from the Choptank moving forward,” Cohen continued. “I would strongly suggest that they show respect to the residents that live here and come to a good faith agreement.”